A couple of years ago I was in Korea for work and in lieu of yet another morning workout in the hotel gym I decided to do some laps on the back stairs of the hotel, using the elevator to go back down and sending it back up to the top when I hit the bottom (seeing a white guy blasting sweat directly out his pores charging repeatedly up the stairs out of the bowels of the hotel was something the room cleaners in the laundry room are still clucking about).   I clearly had forgotten how crushing doing stairs is; I got whipped!  But as I worked through the dizzying tedium of the staircase(which, admittedly, was about the same as the treadmill tedium; it wasn't necessarily a great trade) I started doing some mental calculations of how much I was climbing and how fast I was doing it.  And it reminded me of a question I came up with a long time ago:  is it possible for a human to climb a vertical mile in an hour?  And if so, what’s the best way to do so?

Later - as I licked the wounds I inflicted on my hip flexors from my stairclimbing fest that seemed remarkably efficient at gaining vertical I did a bit of searching around on the interweb for notable human-powered climbs, and started with stairs.   I remembered that there has been a long-running race up the , and while that's obviously way less than 5280 feet, it's still notable and can provide a sense of someone's ability to elevate themselves in a hurry. Turns out that the "course" record is 9:33 by an Aussie pro cyclist named Paul Crake, who did the 1050 foot climb at a rate of 110’ per minute (unfortunately, he was later paralyzed in a cycling accident). In order to climb a vertical mile in an hour a person needs to climb 82 feet/minute, so he's clearly way faster than that, but could he go a bit slower but for 6 times as long?  It's unlikely we'll ever know, because it’s likely that there are no - to my knowledge – 5000+ foot staircases around (which is probably a good thing!)

That said, when I started talking about this with local enduro superhero Jared Campbell last fall, I was pleased (horrified?) to find a kindred soul who had not only put in as much/more thought into the concept of the vertical mile but had also actively pursued it.  Jared not only worked super hard on taking his time down on Grandeur Peak to an amazing 39 minutes (the current fastest strava time by former pro cyclist Burke Swindlehurst is 40:40 or so) which equates to a climbing rate of 84 feet/minute, so he’s in the ballpark.  And considering Jared is a past winner of the Hardrock 100, he is clearly no blow up too soon guy, so he could go farther for sure.   Additionally, Jared had not only also thought of the efficiency of climbing stairs, he had actually tested the theory on a stairmaster himself and had indeed been able to "climb" over 5280 feet in an hour.  So theoretically it could be done.

Of course, no discussion about ridiculous outdoor endurance efforts can be done without bringing Europeans in; they of huge and accessible vertical relief in the , incredible athletes, and apparently an unlimited capacity for outdoor-oriented competitions.   But in this case, of course, they don't care one whit:  a vertical "mile"?  Vas is das?   But I was discussing my philosphical question with Scott Markewitz, who told me that racing the vertical kilometer - or approximately 3300 feet - is new rage in .  Of course it is! (shortly thereafter, La Sportiva introduced their lightweight trail runner called the "Vertical K"). And apparently there's a place in   that holds the championships every October.  And this year the record - as has been done several times over the last few years - was broken, at......30:46, or a rate of an astounding 107 feet/minute, or 6400 feet/hour!   And something tells me that taking the ascent rate down 20 percent for twice as long would be no problem for these guys, if they so chose, and if the right route was presented.

And of course, no discussion of EU outdoor endurance ridiculousness would be complete without mention of Killian Jornet.   As the NY Times put it in their excellent article:  http://www.nytimes.com/2013/03/24/magazine/creating-the-all-terrain-human.html?pagewanted=all&_r=0 This guy is a perfect mountain endurance machine.  Last summer he came to the US for a variety of events and adventures, and one of them was to break the venerable car to car record on the Grand Teton, which he did (but this was actually broken shortly thereafter by an American).  The ascent is a little over 7000 feet, and he apparently did it in 94 or so minutes, which almost assuredly put him in the vertical mi/hr range.  And that waren't on no stairs nor down in the low/mid elevations!  It’s a decently-burly trail.

A nice guy I met at this year's rando nationals has geeked out on this stuff fortunately way more than I or even Jared have, but as a Canadian he too didn't really even consider the vertical mile, but focused a bit differently on the concept of which is the faster ascending mode: running or skinning on skis (running is) and the efficiencies associated with climbing angle with each (steeper the better for running, and a lot less - like 12-16 percent! - for skinning; take that you Wasatch steep skintrack putter-inners!). Here’s the site:
http://www.skintrack.com/skimo-racing/vertical-speed-skimo-uphill-running-slope-angle/  He mentions a fellow Canadian who has also done some extraordinary ascent rates, which interested me because it occurred to me that the Vancouver/Garibaldi/Whistler area might be a good venue due to big relief starting at oxygen-enriched sea level.

Another venue that I had remembered from long ago is in the Columbia River Gorge, just west of .  I remember long ago hearing that the Mazamas (the version of the Mountaineers, Wasatch Mountain Club, Appalachian Mountain Club, etc:  all the clubs full of zipoffed greybeards in big boots and floppy hats) would climb Mt Hood to train for , a near-5000 foot climb.   I had done it once in approximately nineteen hundred and ninety-one,  and on our recent NW trip with a half-day to kill Ash and I decided to give it a go.

It's nice and steep, but too inconsistently-so near the top to make it a great venue (plus it's just shy of the magic mile!). 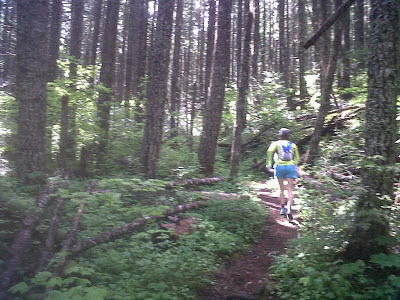 Ash and I did it at a very respectable rate of 3000'/hour and had a nice time (though the summit is beyond anticlimatic; a road with a bunch of radio towers, a fact I forgot to mention to Ash, so it was a bit of a buzzkill).
It's self-evident that a bicycle is a way more-efficient means for human-powered propulsion on the flats, but clearly the relative efficiency goes down as the grade steepens.  But how much?  And can a person go up a vertical mile in an hour on a bike?

Mont Ventoux in just happens to be a 5200' climb starting at something like 1000 feet, and the Tour de France visits it somehow almost every year.  The late Marco Pantani held the ascent record for some time before it was broken by third-place tour finisher Iban Mayo, followed by the likes of Lance, Jan Ullrich, Richard Virenque, and other famed climbers, all of whom have done it under an hour, and......have all been busted for drugs (Pantani was not, but it's a pretty safe bet that he was fairly well-jacked).   Tyler Hamilton has won the Mount Washington hillclimb a couple of times, climbing the ~4400 feet in just over 50 mins, or 90’/minute, and Tom Danielson – another US pro who’s been in the top of the EU peloton – has the course record of just under 50 mins, or a rate of 90’/minute This is a bit shy of 5280, but at a rate of 88 feet/minute it’s highly likely that these guys could have carried on at a slightly lower pace for 10 more minutes.

It’d therefore be easy for me to say that my very unprofessional, unqualified theory is that yes, the vertical mile has been done in under an hour on a bike, but "not" without performance-enhancing drugs (the big climbs in the Tour De France have apparently gotten slower the last couple of years, despite continuous equipment improvements, which could be indicative of a lack of doping.  At least, that’s what the believers want to believe…)  But notably, the venerable and amazing Ned Overend was only 2:20 behind Tyler one year at a rate of 81 feet/minute (and was over 50 years old!), and we all want to think that Ned is clean…..

Me, I have climbed Grandeur's vertical K in 47 or so minutes and climbed Olympus in just over an hour, so my max is about 4000' an hour on trails.  I doubt I can get much faster than that, even if I tried (and I guess I do "try").  And I doubt I'll ever take it seriously enough to get on a stairmaster or seek out an asphalt climb to run up.   So my conclusion is that I certainly can't climb a vertical mile in an hour, but not only can it be done, it has, documented or no.

That is, if anybody cared!
Posted by Tom Diegel at 7:33 PM