An Ode to Tom Meinholz 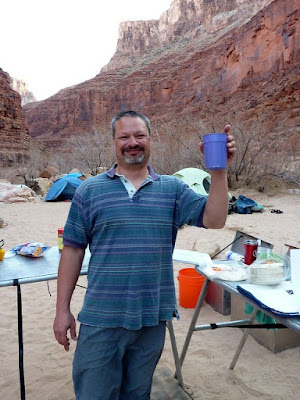 Around nineteen hundred and ninety six I had fairly recently moved to California and was keen to paddle California’s legendary rivers but good paddling pards are not always easy to come by, so when Greg Hanlon said he had some work to do in Sacramento I was eager to make the long drive north up the Central Valley to meet him.  We headed into the hills, pawing through the Holbeck/Stanley guidebook and flipping pages in my new Northern CA gazetteer. We were in the Stanislaus area, which has several forks and a lot of infamous dams deep down in forested canyons, and….we were getting skunked.  Even though spring runoff was happening, the damn keepers were futzing with their knobs enough that we got to a couple of potential put-ins and take-outs only to see mere trickles running down the riverbed.  By mid afternoon we were frustrated but still trying, and we honed in on the Donnells run of the middle Stan, parked one rig at the top of a blocked-off dirt road far above yet another dam and reservoir that was at the bottom of the run, and went to the put in, where we were delighted to see plenty of water tumbling under the bridge.

As we were peering down into the canyon below a big van rolled up and stopped, and poking out the window was an intimidating-looking dude: a big round face framed by a severe-looking black goatee and Terminator shades and a huge gun of an arm perched on the window, but the effect was immediately broken when he very brightly asked “hey, you guys gonna paddle this!?”  Little did I know that chance encounter with Tom Meinholz would change my life.

Tom hadn’t paddled that section but he knew about it, and he was quite keen to give it a go, since he had somehow missed connecting with his buds and was also sort of sniffing around for a runnable river.  Though Greg’s famous adage of “Adopt-a-boater rarely works out for the best” usually applies, Tom’s confident, yet humble demeanor indicated to us that he was a worthy pard for what was undoubtedly a pretty challenging run based on the description and the relatively high water level we saw rushing below.  But the lack of beta on the exit from the dam to our takeout rig and the late hour made him a bit wary, and ultimately he decided to call it a day and wished us the best.

As it turned out, it wasn’t the last time Tom had more wisdom than I; the river turned out to be a stomper and it was pretty exhausting to try to charge down a new hard river quickly, but it was fun right to the final plop into the lake, which we hit with relief.   We paddled a few miles across the lake to the dam anticipating a hike back up to the car, only to realize that the reason the road up top had ended was because the hillside below the road became a washed-out vertical cliff.  We dundered around at the base of in the waning light looking for a way up, but 'twas not to be, and we realized the only potential exit was a double track that traversed the canyon high above the river (ie too far for any drinking water).  So we started stumbling along the rough road in the full darkness and….. we walked all night.

The rest of that tale is the fodder for another story for later, but it worked itself out, and Tom reached out to me a few days later because he had find out how it went, and pretty much laughed his ass off at our folly.  Then, apparently being slightly more impressed with our fortitude than amazed at our stupidity, he invited me to join him the following weekend on one of California’s mega classic class 5 runs:  Kings Canyon.  So a week later there I was driving back up the Central Valley to meet Tom and his crew for a trip down that, and thus began a 20+ year friendship that was cemented by relying on him to be the quintessential river partner.
For me, and for many folks, Tom Meinholz has been the hub of California kayaking for pretty much a generation.  He showed me the Middle Fork of the Feather, the North and south Yubas, the main section of the Tuolomne and the upper Cherry Creek section, the Clavey, the Cal Salmon area, and introduced me to a ton of other paddlers along the way.  We were a fine team:  comparable skills, comparable risk tolerance, and  -for me – his ability to read and understand whitewater was eye-opening.  He literally could see critical nuances in rapids that I couldn’t….until he pointed them out.  And his innate ability to impart his wisdom didn’t stop there; unlike most of his class 5 friends, he not only loved paddling easy whitewater but made a career out of being a kayak instructor despite having a real career as a transportation engineer, and his ability to impart subtle tips to his students literally sped an entire population of California boaters to competence at an unusually rapid rate.
There aren’t a lot of folks that I am willing to put complete faith in.  Tom has been one of them.  When I first came to Utah Tom had been living in Salt Lake as Cara was doing her residency, and we went up to one of the first-ever recreational releases on the Bear River.  Tom had already also become the hub of Utah boating, and at the put in I took in the characteristics of the big posse there with a little trepidation because the UT rivers are a far cry from the rivers of CA, and I was wondering if the confidence they showed was a bit of bravado.  I said to Tom “dude, as far as I’m concerned, it’s kinda just you and me here.” To which he responded: “Absolutely!”  I followed his lines that he nailed perfectly while carnage happened all around us, as I had anticipated.

Our buddy Rocky Contos had been doing a lot of solo river exploring in Mexico and had his eye on one in the Copper Canyon area that was steep enough to warrant a strong team.   I’ve done lots of trips with Rocky that have had a variety of success rates, so when I realized that Tom was in I signed on.  As it turned out, the river was extraordinarily difficult; it took us 6 exhausting days to go just 22 miles, with hours of portaging and running dangerous rapids.
Rocky and I come from endurance backgrounds and are strong in a skinny sort of way, but it was this trip where I saw someone with incredible power can be just as effective.  At one point I was on top of a boulder straining to pull my loaded kayak up onto it inch by inch, when suddenly the boat literally levitated from below and sailed up onto the rock.  I sort of stumbled out of the way in amazement and peered over the edge, and there was that huge smile coming out of the huge face perched on top of the huge chest that held two huge arms, and Tom said “looked like you needed a little help!”  Indeed, I needed help, and got it.  And for that interminable trip, he kept his head together and kept us all laughing the entire time.
Part of Tom’s strength came from being a cheerleader at University of Wisconsin, and his tales and athleticism gave me a whole new respect for that activity.  Tossing human beings around catching them before falling is no small feat, which came in handy for Ashley once when we were canyoneering; she was struggling in a slot, and suddenly she came flying out, with a beaming Tom looking on below.

Over the last 10 years we haven’t done as much together; I haven’t been paddling as much, California’s had a ferocious drought, and the truth is that Tom’s best paddling partner has become his 16 year old daughter who’s a lot cuter’n me!  (that didn’t keep him from telling me every year to come join him at to the Feather River Festival, where I knew that he would know everyone).   I worked hard on him to have his family join us on our recent river trip to Argentina but they couldn’t make it, but it gave me some chances to chat with him.  I asked him if his daughter was getting an attitude as she got into her teens, and he exclaimed:  “she’s just so nice!  She’s getting great grades, running fast in track and cross country, mtb racing above her age group and with the boys, loves kayaking, and she is always telling us how fortunate she is to have such great parents!  The only problem is that not enough of her friends like to kayak class 4!”  Clearly Tom’s – and Cara’s – genuinely nice and enthusiastic demeanor has (so far) been able to transcend the typical teenage demeanor. 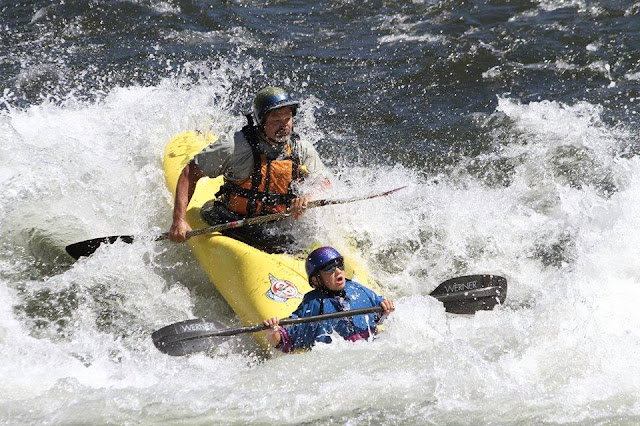 And thus it was an absolutely crushing blow to hear this week that our iconic and ebullient Superman of a friend had died.  Many years ago Tom and Cara had bought their dream place; a rambling house and property high above the South Yuba river.  But being in the woods and being in California the concept of Fire always loomed large, even before the drought.  In an email to me a month ago he said that a Cal Fire guy said they were at risk since the area hadn’t burned since it was clear cut in the 19th century.  So on Monday he was trying to create a fireline around his house when the wind shifted, the flames leapt into the adjacent Manzanita scrub, and he tried to fight it too long, got too much smoke inhalation, and succumbed despite valiant efforts by the local rescue and ER folks, proving that a incredible Force of Nature can only be overcome by another force of nature.

In a recent email to me he recounted a few weird things that had happened recently: a 6-week bout with the flu that had created deafness in one ear, then he broke his thumb, then he “popped” his knee and could barely walk.  But the flue ebbed, the thumb healed up enough to be able to ride a new snowmobile and the knee healed up enough to use it to access new backcountry ski terrain.  He gave me another update on his lovely wife and daugher, and he closed his email with this:  “I am a very lucky guy to be so blessed.”

Tom, we are all very lucky to have been blessed by you. 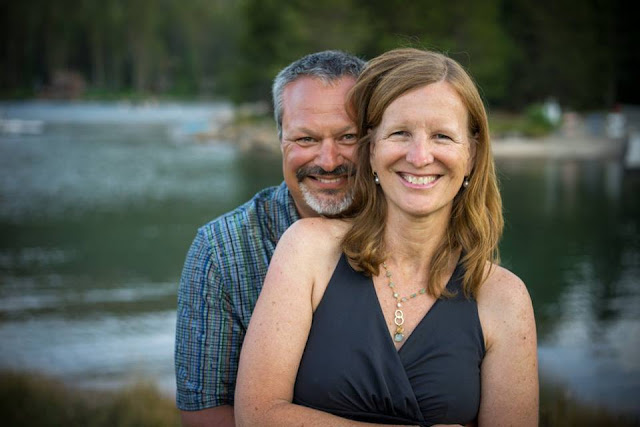