Is Skimo as silly as it seems?

You have probably seen them:  the skinny guys wearing the neon yellow boots with almost no buckles, carrying too-long poles and tiny packs, on kid-sized skis with toy bindings…..and going past you remarkably fast up skin tracks.  “Ah”  you think, as you step aside to let them swish past.   “Skimo guy.  Dork!  Why don’t those guys just stay at Brighton where they belong?!  And why would I want to race something that I do for fun?!?!”

But perhaps there’s an inkling roaming in the back of your mind, that you almost dare not acknowledge:  “Boy, being able to go uphill that fast and get that much more vert in any given outing would be nice, and I’ve heard that that silly light gear isn’t all that bad?  And if I did a hard effort once a week in those weird nighttime “races” I’ve heard about, maybe I’d be stronger on the weekends when I need to give’er breaking trail all day?”  But those thoughts pass, and you put your head back down to stare at your 20 pound package of fat skis with their fat skins, big boots, and burly bindings and unzip the legs of your huge goretex pants as you recommence slowly shuffling up the skin track, hoping to get to the top before SkimoBoy catches you on his second lap.   But what of it?  Is “backcountry ski racing” really that dorky?  Is it possible to actually ski on that gear?  Is it worth my time at all to charge around a dimly lit ski resort at night with other idiots marching up and skitching down in an anaerobic fog? 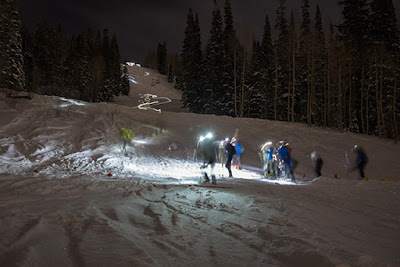 My first exposure to the concept of going fast backcountry skiing was when Andrew McLean initiated the very original “Powder Keg” a couple of years before the formal race actually happened.  He had the idea to set an arbitrary - but logical -“route”, set a time on it, and then other people might be challenged to see how they would do.  I believe the route was something like starting at Alta, going to Pole Line Pass, down to the Cardiff Mine, up Holy Toledo, down to the base of Flagstaff, up Flag, down Days Fork, etc.  This didn’t gain much traction, but was the impetus to create the “real” Powder Keg randonee race that traversed Alta, Grizzly Gulch, Solitude’s Honeycomb Canyon, and Twin Lakes before finishing at Alta, and it caught on so much that it quickly became a stop on the World Cup tour, with the fastest skinners/skiers in the world (Europeans) flying up and down the Wasatch for the ’04 and ’05 Powder Kegs.

Since then March’s Powder Keg has continued to flourish even without the Euros, and with over 180 participants is by far the most popular “Skimo” (short for “ski mountaineering”, a formal change from randonee racing, but not as good, in my opinion, as the sometimes-used term:  “ski running”) race in North America.  And notably, the second most popular race in the country is….any given Tuesday night at Brighton!  A couple of years ago some of the local enthusiasts had the idea to have a midweek series of 8-10 races, and Brighton was kind enough to agree to let us use their resort.  The races have had an enthusiastic reception, with nearly 100 people showing up to  - indeed  -charge up and down a ski resort in the dark in an anaerobic fog.  And while the skinny guys – and gals - in their skin suits and feather weight gear are the most-obvious sorts, there is actually a majority of folks who are on “heavy metal” (ie anything besides really light) gear who share the same goals:  take the opportunity of a race to build up fitness and improve skills with other like-minded folks, and probably the best part of the races is the socializing afterwards; it’s a good community.  And actually, I think it should be spelled "heavy mettle" since hauling regular gear around as fast as you can and doing it in a reasonable time is impressive!

Despite the "free"  entry (ok, for insurance purposes, there's a season-long charge of something like $30) the midweek skimo races get a remarkable amount of impressively good gear to give away thanks to sponsors like Voile who provide shovels, probes, and even skis to the races, and the prizes usually go to folks who are there for the first time, who came the farthest, who had the heaviest gear, the best outfit, etc.  The “winners” – as if anyone really cares who wins – typically get grocery store punkin pies; that is, unless they’ve won one before, then it goes to the next person who hasn’t won one.  All very serious business! 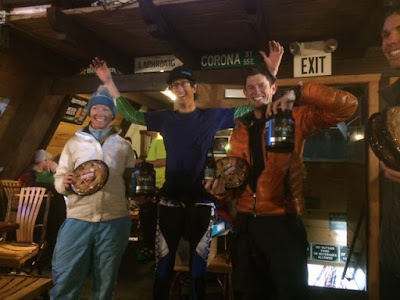 Most people go out for a typical weekend ski tour and are satisfied with 5000-foot days, which is great; that’s a lot more vertical than a typical mountain bike ride or trail run, and enables a few good ski runs.  However, one thing that skimo makes you understand very quickly is that the ability to climb faster has a huge effect on your ability to get more done.  Even non-fast people do the 5600-foot Powder Keg under 4 hours, and everyone has the eye-opening realization that 2000-foot hours are not only feasible, they can become common.  Which makes longer objectives and more runs in a day much more reasonable.    And if you get into skimo enough to throw a “workout” in periodically in order to be more competitive relative to the people that you find yourself racing with, that then translates into greater fitness for breaking trail with your buddies on the weekend.
But what about the gear? Is it really possible to actually ski on those silly pencil sticks?  And are 1-2 pound boots capable of pushing a ski around? And would anyone actually use that gear for “real” skiing?    The skis and boots actually ski surprisingly well in anything other than deep powder, and  - as I have been wont to say – if you think that going fast on big skis is exciting, going fast on little skis is REALLY exciting! 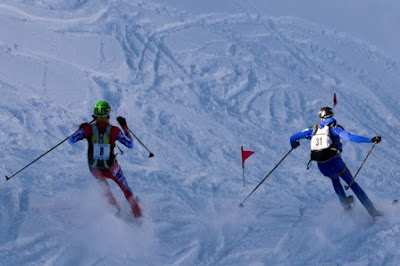 But you kind of have to let go of your self-perception that your form has to be perfect at all times and revel in the challenge of skiing decently in sub-optimal gear.   And again, if you don’t have have the skimo gear (and unfortunately, it’s a fair bit of investment to go big, tho Voile’s Wasatch Speed Projects are the cheapest of the skimo skis yet are on par with any of the competitors’) you can still thump around on big gear at the local races and find Your People that are comparably paced.  And despite some admonitions that "it's all about the down" the truth is that approximately 94% of the time on your backcountry ski days is spent going uphill, you might as well feel somewhat swift and enjoy the climbs with lighter gear as well.

A great resource for light gear - both skimo and the emerging "really light but more skiable than skimo" market is the website skimo.co.  This is the first light/fast-focused retailer in the country, and Jason has been successful enough with his online business that he recently opened a retail store near the mouth of Big Cottonwood, and it's my understanding that he's going to have Wasatch Speed Project skis mounted up with adjustable race bindings for people to demo, so it's possible to dip your toes a bit.

The first skimo race of the season is Thanksgiving morning at Brighton, and it’ll either be a good excuse to hammer a bit before the evening gorge-fest, and/or an opportunity to crank yourself for an hour before going out for a “longer” tour (limited snow/terrain makes “longer” a bit more challenging these days), with subsequent races on Dec 1 (so you won’t forget all the stuff you learned at the Thanksgiving race) and Dec 15, with more following after the new year.   Here is the site for all the scintillating news about Utah Skimo.

Is skimo contrived and a bit geeky?  Indubitably:
Is it eye-opening, skill-building, fitness-enhancing, social, and really fun?  Absolutely.