At the time of my last post we were stalled for a day in Cold Bay, Alaska trying to get our last flight of our journey to start hiking towards Shishaldin.  So I familiarized myself with the thriving metropolis:
and got antsy for our trip: 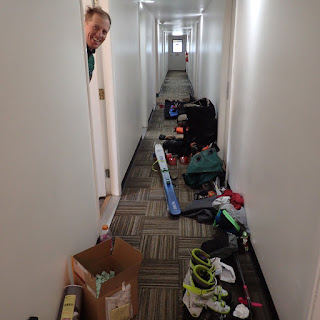 Finally we were able to get on the flight to False Pass: 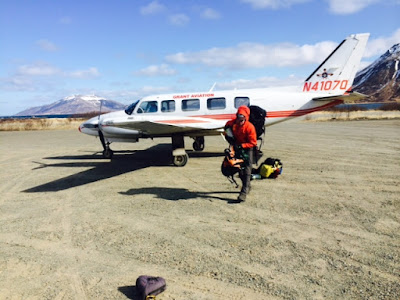 and get started on our journey.  The weather was promising:
We had a good look at our intended route (in red) to get around the unnamed peak to the left. 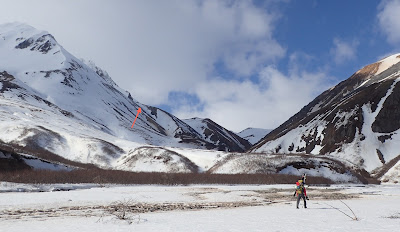 and got our first taste of the hard snow. 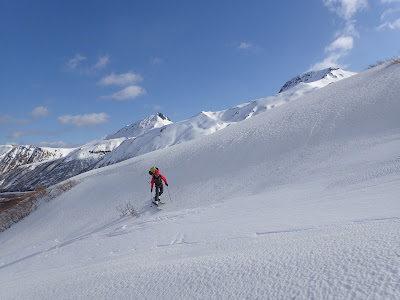 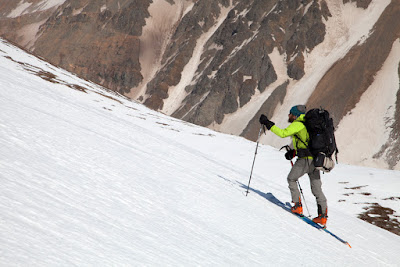 it's a bit hard to convey wind in a picture, especially when there's no snow to blow around.  But the wind was cranking here, and just above this we faced the prospect of traversing across those slopes shown in the arrow in the pic above.  We cramponed up and mounted the skis on our packs and started to move, but the wind - that I guessed was in the 60mph range  -was literally blowing us off our feet, especially with skis sticking up over our heads and acting like sails, and making the traverse across 40 degree slopes into the gusty winds with 800 feet of yawning slope below us was unappealing and the day was getting long anyway, so we retreated back down to the creek bottom to a sheltered spot to camp.
There were some nice clouds in the area; I wonder what those cool lenticulars mean? 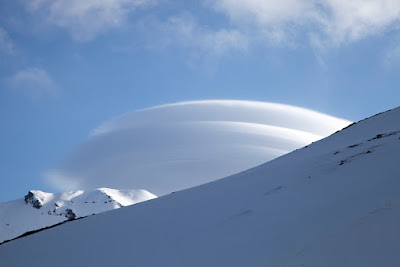 We found out.  The next morning we awoke to even higher winds, colder temps, and snow.  We later heard that there were 80mph gusts recorded back down in the village, and we had one of "those days" on expeditions (if being 3 mi from a village was indeed an "expedition") that was spent almost exclusively in our humble little home.  Due to weight considerations we went with a pretty small tent with a vestibule, so we had to sleep head to foot since our combined shoulders wouldn't fit, and realized that only one of us could move at a time.  Fortunately Cameron is a really interesting, funny, and chatty guy so the day passed pretty quickly (tho I had to shut him down a bit to dive into the book I had hauled along!).

The next morning broke with clear skies and somewhat reduced wind, so we packed up and headed up towards Round Top Mountain (we changed course to avoid the skitchy terrain we'd been on prior) which we had to skirt around to get into the rolling terrain that would take us past Isanotski to Shishaldin.  And despite our efforts otherwise, we still found some good Alaskan Thwack: 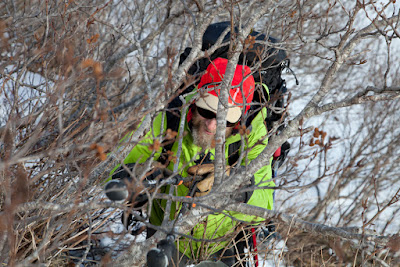 We had mellow, rolling terrain as we got towards the peak:

and actually some powder had blown into the little protected gullies: 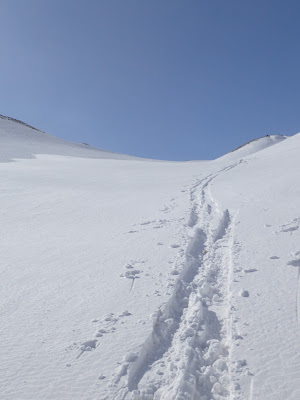 But generally the "snow" looked a little on the hard side:
We needed to ascend one of two 35-40 degree slopes to get over the flank of Round Top; here's a bit closer view: 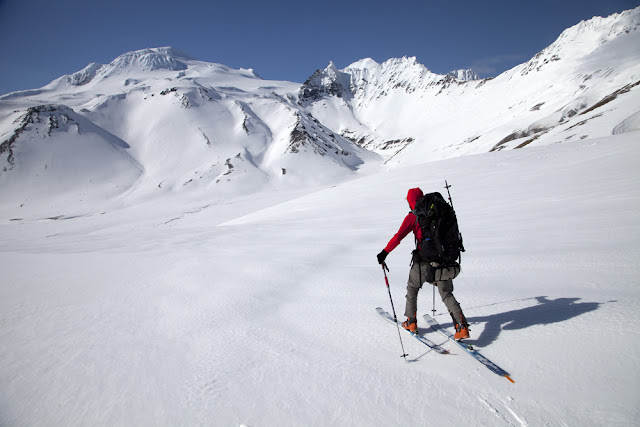 and we started skinning up a ramp that took us to the rocky ramp in the middle of the photo.  It was still cold and windy, and despite the fact that it was already around noon and the sun had been out all morning there was no softening going on.  But again, with both ski and boot crampons it would likely be fine.

However, as I was ascending the ramp I looked down to put my hands into my pole straps and a big gust of wind came up and buffeted me; I staggered a little and moved my foot/ski out to the side to brace myself, and suddenly my skis shot out from under me and I was down on my hip, and was stunned as I instantly accelerated to about 20 mph sliding down the ramp that I had just skinned up.  I was in no danger at all, but could not believe how slick it was.  And this was the formidable pitch I slid down:
I finally stopped down in the flats not far from Cameron, who had been equally amazed at a) the fact that I slipped in the first place, and b) the speed that I achieved so quickly, even with my pack dragging on the snow.

As I shook myself off and struggled to heave me and my pack to my feet on the ice, Cameron hollered into the wind "Maybe we should talk about this!"  We had literally never experienced snow/ice like this; sure, I'm a Wasatch-based Middle Aged Powder Pussy (MAPP) but Cameron's a former racer, and we realized that our edges were not having any effect on the snow; a "turn" was more like a controlled downhill sideways slide.
We looked around and realized that the prospect of actually skiing anything much steeper than what I had slid down seemed scary; it was so weird to look at slopes that we'd normally slash down with nary a thought about it and have them sorta strike fear in our hearts!  I'm sure that our Vermont friends would have laughed at such child's play ice, but it was odd and intimidating.
We retreated to a slightly less-windy spot for a snack and to discuss.   As I mentioned in the earlier post, Shishaldin is remarkably uniform and we guessed that its steepness was a consistent pitch of the mid-high 30's for nearly all of its 8500 feet of relief and steeper at the top, which in any other snow conditions would be totally fine, but with that ice - that wasn't even penetrable with an ice axe, much less a whippet (an ice axe attachment on top of a ski pole grip, which is all I had) - and even though climbing it with crampons on was fine, the prospect of clicking in and skiing it sent chills down my spine.  The forecast was for decreasing winds and warming temps, but was it enough to soften the ice on Shishaldin?  We guessed that the temps were still in the low-mid 20's; and I asked Cameron what our elevation was:  "Um, 800 feet."  Ok, I'm no meteorologist who knows all about lapse rates, but I do know that typically temps drop as elevations rise, and the concept of any change in snow conditions happening 8500 feet up seemed low.  And even with the wind at False Pass expected to drop, we had been told by virtually everyone that these mountains - at the intersection of the Bering Sea and the north Pacific - create their own venturis, so it was bulletproof, but at least we'd continue to get blown around on it.

For sure, had we brought ice screws and a rope things could have been different, but it wasn't really a "climbing" trip per se....

So it came down to this:  we realized that the prospect of skiing the peak was low at best, so were we willing to hike for 2 days to confirm the decision and then turn around and hike back, or do we decide now and cut our losses?  It wasn't really a backpacking trip, and even getting over our first obstacle to get to the rolling terrain was clearly "a deal", and the answer seemed fairly clear.  And thus we made our retreat. 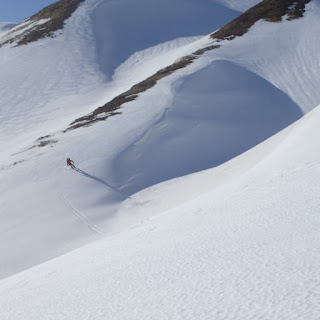 As we got back into the drainage this guy seemed to be sort of mocking us: 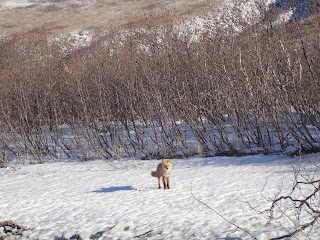 but we looked back at the mountains and saw the day's prior skiff of snow blowing off the peaks: 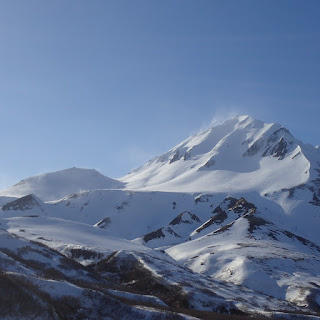 Upon reaching False Pass we were greeted by our fan club: 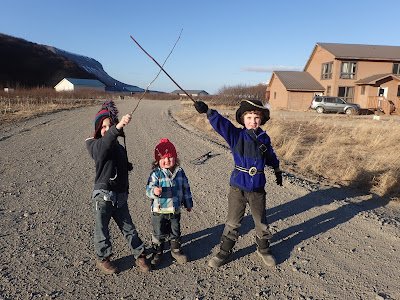 and retired to the community center: 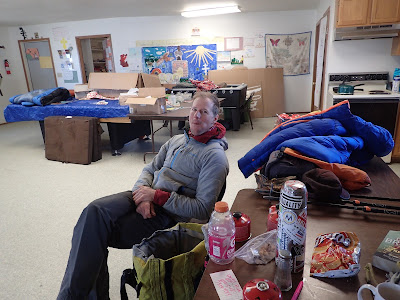 to await the flight scheduled for the next day.

That night I tossed and turned a bit and started second-guessing our decision:  why not just go for a ramble in the mountains in a remote area?  We'd scheduled the time, the weather was fine, and maybe there was powder up that high?  But as we hung out in False Pass we realized that the "warming" that was forecasted meant it went from the low 20's to the mid-20's:
and we felt that our decision was validated.  It simply had been a lean snow year with cold temps and tons of wind, and thus the conditions did not invite success.
One of the planes associated with our retrieval back to the real world had mechanical problems, so we got to spend another day hanging out in False Pass.  A few interesting bits about life out there in the Aleutians: Energy is created by generators, and they go through 250 gallons of diesel a day for the 45 residents: 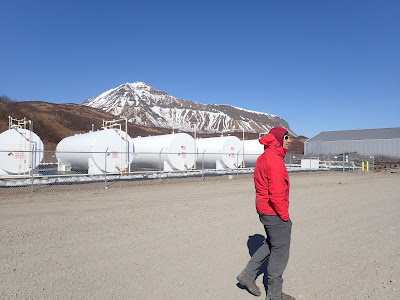 they get grocery delivery by boat - including produce - once every 2 weeks.  And it's a pretty small place: 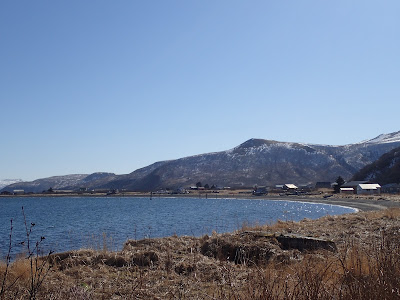 Where even the labs got some Alaskan husky (eyes) in them: 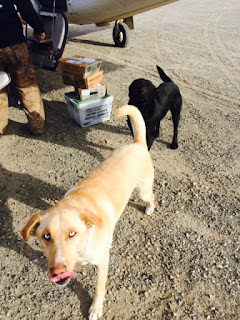 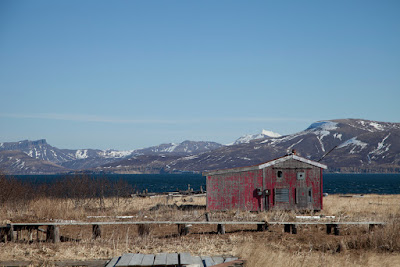 It's a pretty bleak place to live and the lack of available resources and expense/challenge of leaving for any reason is really interesting, but folks there seem to roll with it just fine.  And there is a nice little hike above town:
apparently it's a big migratory route for grey and humpback whales; it's the first real break in the Aleutian chain between the Bering and Pacific.  But apparently there's a sizeable orca population, and the orcas prey on the greys by grabbing the fins of the young whalettes and drown them.  But some folks actually realized that the parents go underneath the mess of orcas hanging onto their young and just push them all up to the surface (and humpbacks have been seen doing the same to grays to help their fellow whales against the orcas).

The plane finally came for the next leg of our journey home:
Back in Cold Bay we appreciated the mellow airport again, that has no prob with a bit of imbibing near the gate: 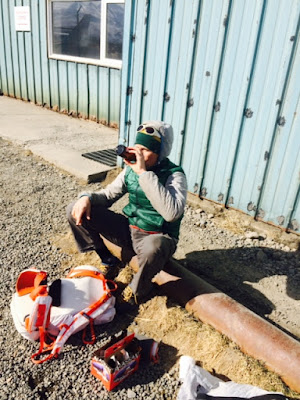 And eventually ended back in Anchorage, where we were able to check in with Wendy and her man John for some yuks: 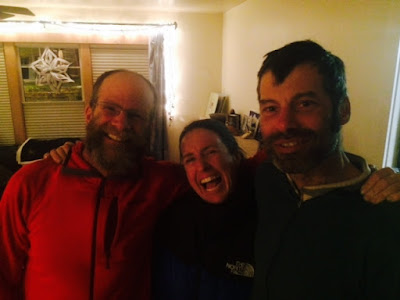 That area of Alaska has had a cold, windy, and relatively dry winter, and even though we had more time there, I wasn't keen for hunting and pecking for icy gullies between wind-swept ridges, so I headed home (tho Cameron stayed and the cold, high pressure forecast at Girdwood somehow yielded 8" of powder the next day!)

If you want the security and predictability associated with most vacations, late winter in Alaska and specifically the Aleutians is probably sub-optimal.  And Shishaldin may be a bit elusive even beyond that.  Maybe later in the year, like May?  But with a ratio of 2 monster grizzlies per sq mile there would be an added adventure layer.   Will I be as keen as Cameron and return for another go?  Unlikely.  But despite the lack of activity and the lack of success, it was a fun trip, mostly because Cameron is a great pard for something like this and made the downtime pretty entertaining.