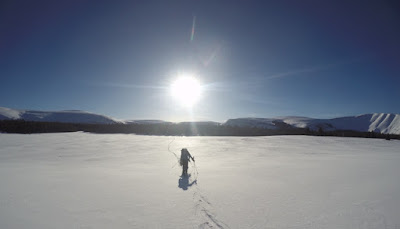 I have tried a good number of times to embrace the Uinta Mountains.  In theory it's a great zone:  the only east-west oriented major range in the US with tons of great peaks, high elevation, and despite a bit of road access, most of it is quite remote.  But I've been a little frustrated at times:  attempts to kayak the rivers have been met with long marches and lots of wood, backpacking trips have been a bit long, tedious, and wet, and the trails are technical/rocky enough that it's hard to "really" run them well.  But I have continued to try the Uintas periodically and am usually game for a good adventure, so when Chad Brackelsberg invited me to join he and Eric Bunce on a "fast" ski traverse I was intrigued.

The Uintas stretch from near Park City almost all the way to Colorado, with the main ridgeline rolling between 11,000 and 13,500 feet, with a relatively inconspicuous bump on the ridgeline being Kings Peak, the highest point in Utah (the 28 mile round trip to the top is a bit of a rite of passage for most Utah outdoor types).  The Highline "trail" proper goes from a trailhead a little below Leidy Peak at the eastern edge (Leidy is 11,800 feet) to Hayden Pass on the Mirror Lake Highway, and is about 78 miles and has about 15-16 thousand feet of ascent/descent between, rolling over rocky terrain interspersed with lakes, creeks, and marshes.  Chad had done it as a summertime through-run twice:  the first time during a summer thunderstorm (my theory is that the Uintas get hit harder than other ranges in these parts by the typical monsoonal flow because the flow comes up from the south and slams into the long east-west "wall") and he memorably shot a wild-eyed video selfie basically identifying himself and and providing his own last rites because he was convinced that he was going to be struck by lightning. He learned his lesson and waited for mellower weather and he and his wife Emily ran it self-supported under better conditions in about 28 hours.  We knew that the SLC Samurai had given the 2nd "half" a good go in a very long "day" a few years ago late season, and Noah Howell and Andrew McLean made a later attempt that was thwarted before it started, and no doubt there have been other folks who have skied it expedition style, but no one else -to our knowledge - had tried to ski the whole thing sorta fast.

By "sorta fast" I mean that we were on skimo race gear:  yes, the geeky lycra suits, the skinny 160 cm skis, lightweight bindings, and light boots with big gaps in them.  And while our packs felt heavy at 27 lbs (7.5 lbs of food, sleeping bag/pad, bivy sack, repair/first aid, and warm clothes) and made our shoulders sore, it was interesting to note that the total weight  -when combined with my 8.5 lb skis/boots/bindings/skins and 1 lb skin suit - totaled about 36 lbs, and my typical Wasatch day ski get up weighs almost 20 lbs with a 15 lb pack, so it's actually about the same weight that most folks tote around on day tours.

Chad was convinced that despite having a 10+ mile approach to the "trailhead" (it's far too high, remote, and unused to plow to in the winter) it was doable in 3 days with the right conditions, but "right" is sort of a relative term.  If - as Derek Weiss put it - the recently-visited Aleutians are the "Birthplace of Winds" then the Uintas are the bastard child:  the Uintas are famously windy, and when combined with sun, that can make for fast snow surfaces.  But also because they are windy, much of the west-facing terrain gets the snow blown off, and if you wait too long in the spring much of the skiable terrain that never had enough snow in the first place gets melted down to rock.  We had a window of a few days of warm, nice weather after a storm before the next major storm was progged to roll in, so we thought the window might open.

And thus we found ourselves at a random, gated/locked side road off highway 44 at a bit over 7000 feet - almost within sight of Flaming Gorge reservoir - getting dropped off by the ever-generous Jackie who was willing to abet us on our fool's errand: 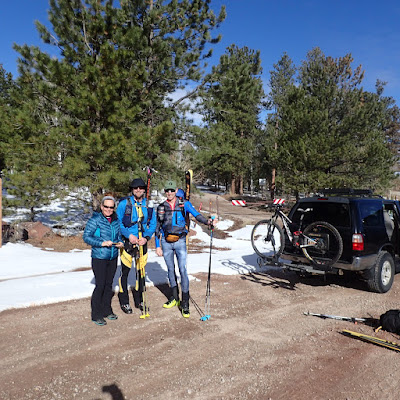 Fortunately we were able to start on at least a bit of snow right away: 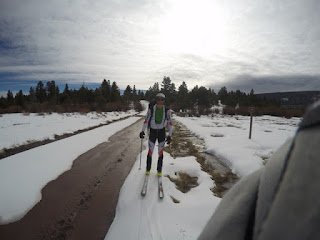 But considering that the treeline in the Uintas is typically near 11,000 feet we had a lot of trees to navigate: 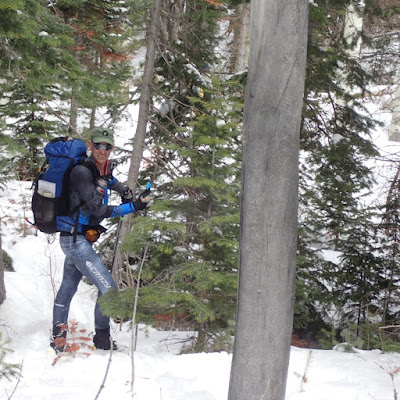 We were looking for a trail that we thought may not even exist, but after some gps-led bumbling through woods: 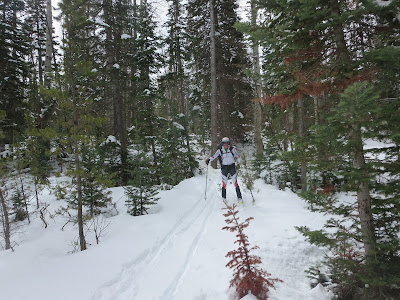 we suddenly stumbled onto the trail:
now we were able to move uphill more efficiently, which was good, but the heated snow down low had soaked our skins and despite all of us having hot waxed our skins we started "glopping" (a very technical term for snow sticking to the bottom of our skins) as we ascended into colder snow:
Ultimately we got to the main road up that leads to Leidy Peak, which had some snowmobile tracks on it: 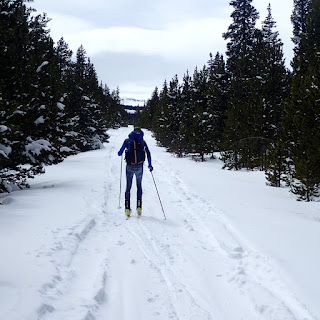 That made for somewhat easier travel, since the hardened sled snow didn't glop as much and enabled less trail breaking.  After taking 7 hours to go only 14 miles (a bit farther than Chad anticipated) we finally reached the real trailhead:
And proceeded past Leidy Peak into the rolling hills beyond, 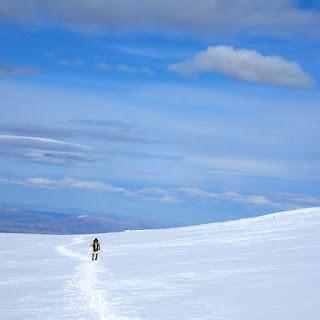 though the snow did indeed get colder, it turned to breakable powder crust, so even though we weren't climbing much more our speed was still slowed by the need to break trail: 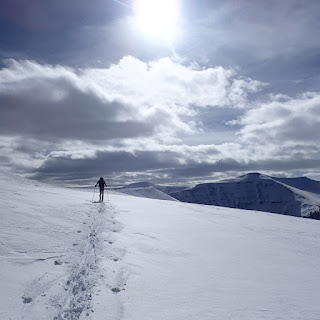 And this point Chad and I could see that Eric's feet were hurting; every time we stopped he would gingerly pick his feet up one by one to try to take the pressure off of them, and it turned out that marching and breaking trail in the heat of the day had created some quick-onset trenchfoot that was quite painful.  He was stoic about it,
but it was clear that between his foot pain, the woods navigation, and slower-than anticipated pace we were going to end up a bit short of our goal for the day.   But we found a nice campsite and had enough wood for a fire next to a nicely-reflecting rock: 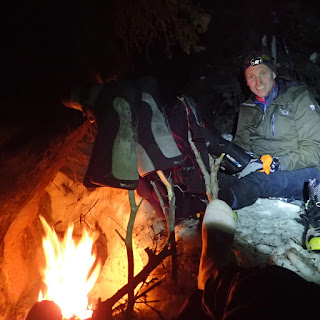 which was nice because the earlier storm's aftermath had the temps up high get fairly cold; down into the teens.

This was where the "light and fast" thing became a bit more challenging.  We had forgone any kind of shelter, which to traditional mountain folks probably sounds stupid:  doing a late winter/early spring traversed of a remote mountain range between storms with only lightweight sleeping bags and no tents is definitely not recommended in Freedom Of The Hills!  But those guys aren't on skimo race gear nor wearing spandex suits either.   But with puffy jackets and (for me) puffy slippers and mylar bivy sacks we were able to sleep ok. 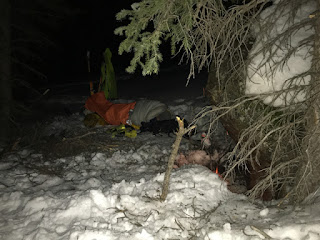 Another day of trudging over high, windswept ridges followed:


But we were also able to find a bit of open water to stock up:
the skiing was sub-optimal:
but we did get a couple of turns:
The Highline trail in this section also drops into some big basins, so we had to do a bit more forest navigating, and despite the warm temps of the day before and the cold temps at night, we still did not have a supportable crust to zip along on, and our progress was still only about 2mph; it was simply not fast enough.
We talked a lot about our options and what it would take to successfully finish, but what loomed large was the storm that we knew was schedule to stomp in hard Friday night/Saturday morning. The timing and ferocity were important, because if it came in early (as the previous storm had) it would really bog us down (or if later, possibly enable us to have more time to finish), and if it came in harder than anticipated we could get into avalanchy situations, or make for even slower, miserable, and possibly dangerous camping/traveling, since we were going pretty light.
Using the satellite-connected gizmo that was uploading our track to The Interwebs we were also able to get and receive texts from Chad's wife Emily who was updating us with the forecasts, and it became clear that we needed to have a really long day and get a bit lucky to enable us to finish without getting hammered by the storm.  I was pretty dubious, but Chad is smart and safe (albeit a bit obsessive!) guy with not only a lot of silly endurance efforts but plenty of Uinta experience, and he made a good case for our odds of success by charging hard the next day.  But as darkness rolled in and we were still a few miles from our trip high point of Anderson Pass near Kings Peak we pondered trying to get over the pass and ski down the backside in the dark (albeit with great headlamps and a near-full moon) to hopefully find some trees for shelter (the wind was starting to pick up) we decided to camp. 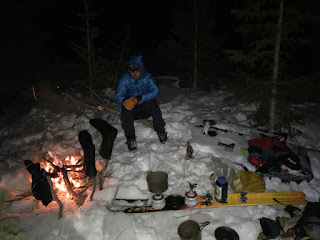 I think our tentless camp at 11,000 feet was featured in this: 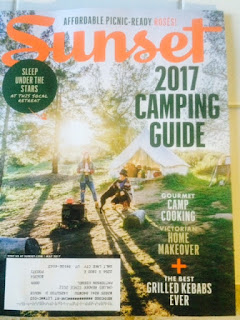 As it turned out, the wind did indeed pick up, and it went pretty big.  We didn't get much sleep as the jet force winds started to crank, and by morning it was clear that our thin margin of error had been erased, and it was time to make an early exit.   We had a beautiful sunrise:


Ironically, after we descended from Gunsight Pass and went into the long, flat Henry's Fork Valley
the wind we'd marched into earlier the morning went to our back and the long-sought-after supportable crust finally appeared, and the wind blew us along the flats at 15-20 mph!

And as we got into the long, flat valley that's well known to Kings Peakers we not only finally had the supportable fast crust that we'd been hoping for, but we also had a tail wind that blasted us along at close to 20 mph! But soon enough we dropped out of the wind and into the heated snow, and our trudging through slop recommenced back and forth across the creek: 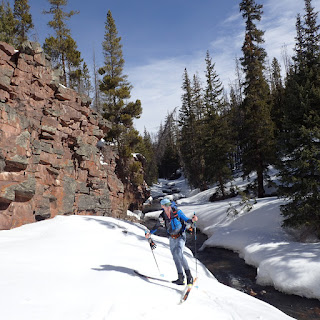 And it wasn't all that easy:
until we hit the road and then the three more flat road miles to skin out to the typical wintertime trailhead
where our angels Jackie and Brother Paul came for our salvation at our terminus.

We could look up and see the spindrift coming off the high peaks, and post-trip checking of weather stations indicated consistent westerly wind speeds in the mid-40's with gusts into the mid-70's, which would have been grueling to march into at best and terrifying at worst with bigger peaks and more exposure looming ahead.  Despite a fair bit of disappointment, it was clear that we made the right decision.

On one hand it was yet another "failure" of an expedition, but despite agreeing to go on these trips I'm more interested in the experience than the actual deed, and this was a great learning experience for me and a good adventure with a couple of great guys that ended well, and that's my real goal.  It's likely that I won't sign on to do the whole trip again, but I am intrigued by "finishing it off" if for no other reason than we were just getting to the meat of the High Uintas.

thanks again to Chad and Eric for letting me tag along and be great pards for such a trip; in skimo races the three of us are pretty evenly matched, and as I anticipated we made for a good team for an outing such as this. 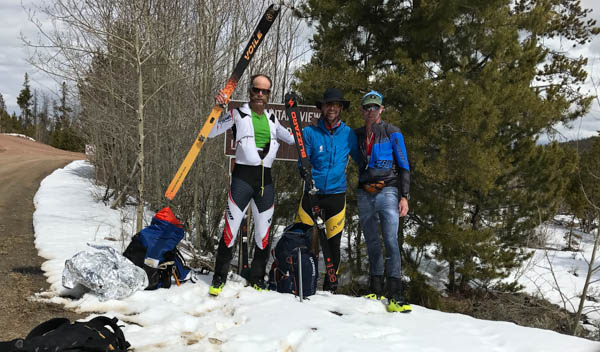 And for Chad's take on this, here's his blog post as well, with some familiar pics and tales