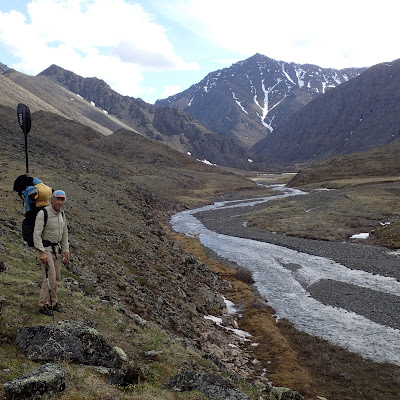 The commonly held beliefs about traveling in grizz country is to make a lot of noise while traveling, store your food, eat your food, and sleep in a fairly big "triangle" separating each of those activities by 50 yards, and tote one or more of a large caliber gun, a loud noisemaker (air horn), and/or bear spray.

But Brad and Roman's 60-odd years of collective experience in grizz country them has taught them some unorthodox methodologies which contradict all of the above.  Basically, their strategy is thus:  don't announce your presence to bears, try to spot the bears first (and Brad/Roman are really good at spotting them), your food doesn't smell any stronger than the scent that you are giving off (especially after a week out!) and trying to treat your food differently is a waste of time.  In fact, Roman pointed out that bears actually lay on top of their kills to protect it from other predators, so a bear coming upon a weird angular thing like a tent with hidden large, stinky animals "growling" (snoring, which clearly has served Roman well!) on top of their food may make them think twice about going after the food, so we pulled all our food into the tent.  Weight-intensive pack rafting somewhat precludes the desire to carry a firearm that would be effective on an 800 pound bear, and Brad feels like the best use of bear spray is to spray it and have the cloud blow back in your face, which makes you go apeshit crazy and thus scare the bear away!  Seriously though, with a "range" of 8 feet (??!!) the reality of stopping a bear that can run 30 miles an hour within 8 feet -  much less having the wherewithal to do that - seems unlikely at best.

They also made the great point that bears are sophisticated enough animals that  -just like dogs and horses - they are not all the same, and have different personalities, temperaments, and moods depending on the bear, season, etc (which was something that Grizzly Man had emphasized).  So our habit (desire?) of applying a standard way to deal with a big complex animal (which - in this part of the world) has rarely/ever seen humans doesn't necessarily work (incidentally, our bear incidents were almost all across the border in Canada, where the national park does not allow hunting. Ironically, the "refuge" in the US does allow hunting, and the few bears we did see there did seem to try to avoid us).

So using the "technique" of basically trying to avoid them we had seen a dozen bears  and had no problems aside from my notable incident with my momma and yearling).   We had walked about half of our total distance (30 miles) up the Malcolm River when we saw our unlucky 13th bear about a third of a mile from us in the drainage.  The wind was kind of swirly, so we weren't sure that it had caught our scent yet.  We crossed the river (about knee deep) and went a couple hundred yards up to a bluff above the river; the bluff had a steep face between us and the bear, with gentler slopes on either side.  We got to the top of the bluff, which is when the bear saw us and....immediately started walking towards us.  I stammered "holy shit.  it's coming towards us.  whadda we do?"  "Grab rocks" was the grim reply.  It got to the river's edge and stopped to take another look, which is when Roman yelled his standard line:  "Hey Bear!  Go Away!"  Which - apparently, in June (ie hungry) Bear-ease - translated to "Dinner's on!"  and to our horror suddenly charged across the river coming for us.
Virtually every wild animal I've ever seen - aside from a couple of very unconcerned mooses and a coupla bold coyotes in Death Valley - have responded to the presence of me by turning and running away....fast (including grizzlies).   And even with my recent experience with momma I still had a moment of "WTF is going on here?!?!  This is not what happens!"   And I have had the misfortune of almost getting killed at least 4 times, so I have felt mortal fear.  But watching that thing come at us like rolling thunder without expression scared me to my bones. But fortunately Brad and Roman went to the edge of the bluff and as the bear basically flew up the cliff at us Roman let fly with a head-sized rock that.....missed the bear.  But apparently this bear wasn't accustomed to animals that fight back at all, so just as fast he beat it back down the cliff into the river bottom.  After a moment, however, he turned and looked back up at us, then very methodically started to move to the side of the bluff that offered easier, less-exposed access to us.  He basically revised his hunting strategy, and we were prey.  I was stunned.

But Brad and Roman broke my momentary reverie by yelling "down the cliff" so we clambered down the face (not easy with 50 pound packs), rushed over to the river and crossed it, even as we checked over our shoulder and saw the bear continue up the easier side of the bluff (I think we were out of his line of sight when he was going up and we were going down).  The last glimpse we saw of the bear it appeared that he was sitting down at the spot where we had just been; I think that he was just reveling in the lingering pungent smell of human fear still wafting in the area!  We didn't say much and just marched hard for about 45 minutes, with periodic glances back indicating that we weren't being followed.  Finally we relaxed a little, went another hour or so and threw our packs down for the day (in a thunderstorm)
Fortunately we all are pretty good sleepers and were able to sack out pretty hard even with the memory of Yogi in full sprint at us fresh in our minds.
Back on track, we continued to walk up the riverbed 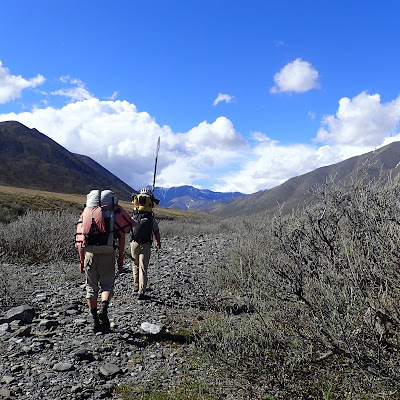 towards what we knew was going to be the crux of our trip; getting up a side drainage and around the flanks of Great Whale Mountain was the part of the trip that looked pretty skitchy on both maps and Google Earth.  Kirk the pilot said "no problem!" but Brad and Roman pointed out that pilots rarely know anything about the terrain they fly over.  But it seemed to go with a bit of scrambling 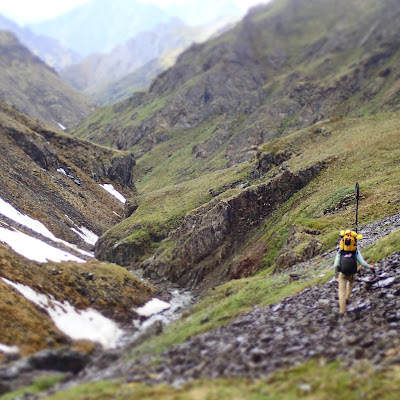 And even though we had a few tussocks to navigate:
and we still had some solid bear reminders:
we were pleased to see caribou trails heading up our anticipated drainage; caribou are no mountain goats and generally seem to go through terrain that is also traverseable by bipeds.  And it was fun to be on trails that weren't created by WPA or CCC workers....they've been trails for millions of years!


That pass took us up and down into a dramatic gorge: 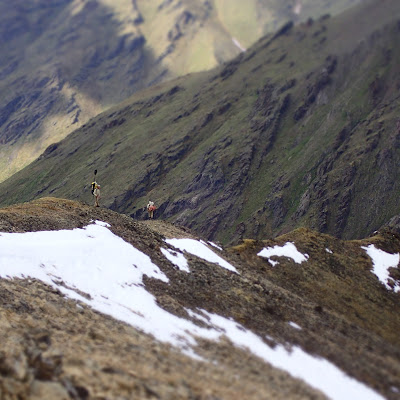 of an unnamed creek that we dubbed "Geezer Creek" that we hoped was paddleable, but weren't sure.  We were pleased to fairly quickly find enough water...until it went into a burly-ass gorge 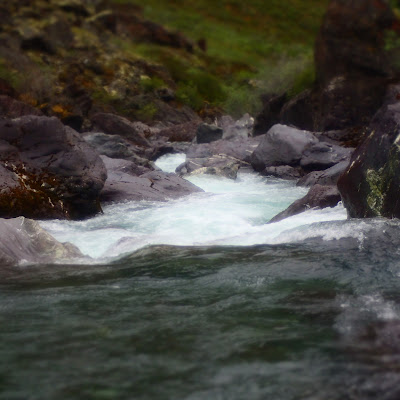 -but then backed off to a fun little class 4 section:

then class 2-3 to the aufeis of the Kongakut 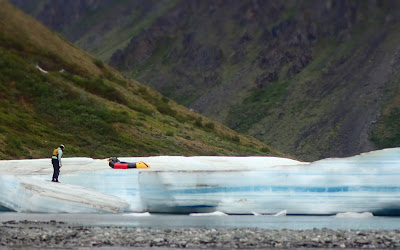 and a few miles down we saw our first signs of civilization. 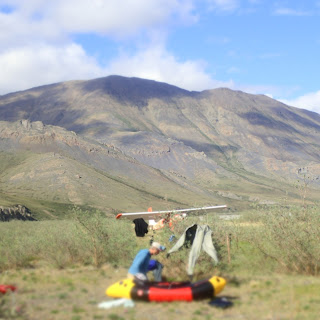 That was also where we had Kirk deliver our barrel of food, which made me happy:
There was a party there from St Louis that had just landed and was planning on paddling canoes out to the coast.  In a very short time I was able to offend them in multiple ways:  two of them were scientists for Monsanto ("Ah, The Evil Empire") and they asked me why we were wearing running shoes ("because hiking boots are terrible!") and what we were using for bear protection ("Bear spray is worthless!") even as the next morning they were all sporting both hiking boots and bear sprays!  But they were nice enough to be nice to us despite me and my offensiveness, and it was impressive that midwesterners were keen for an unguided arctic adventure.

We left the river and headed up and over the mountains to the Egakserak, with packs once again laden with food.  Our slow trudging enabled Roman to make another cool find:
A full day of hiking brought us to a tributary stream that had a surprising amount of water in it, and then as we got to the Egakserak itself we realized that it was quite full.  We had anticipated having to hike down that river 15-20 miles, but with plenty of water coming from somewhere and a high but steady gradient we floated that distance in just a few hours. 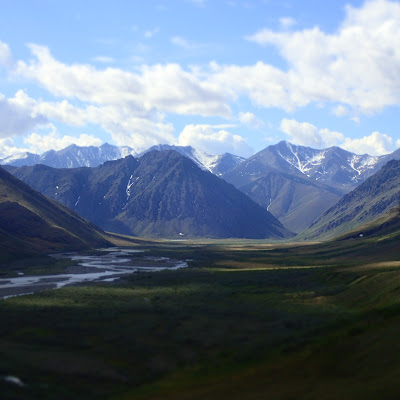