If it's April it must be Spring Break time, and if it's Spring Break it's time to go to Daytona Beach!  Or, I guess, the southern Utah desert is a good second choice.  And thus last week was the annual canyoneering fest, which - as always - is sponsored in part by the New Hampshire and Cincinnati Canyoneering clubs, presided over and funded by the Hanlon and Elovitz Family Foundations.

The week's grovelfest got off to a good start when Colin, Ash, and I went down early to do the notoriously-skinny Shenanigans canyon in the North Wash area.  It has long sections that are only 10 inches wide and doesn't let up vertically until the top, so if you are prone to claustrophobia, this is a great place to confront your fears.

I didn't get any pics of the real tight stuff because a) it's really hard to get good canyoneering pics at all, much less when it's really deep and dark, b) I pretty much couldn't even reach into my pack half the time to get the camera out, and c) there's nothing quite like being deep in a slot canyon with thunder and lightning crashing and flashing overhead and rain spilling into the canyon, so our focus towards the end was downcanyon motion, not pictures!  But we were able to get through the nefarious Grim Crawl and out the exit rappel without getting the waterpark slide effect.

And then the erstwhile members of the NH and Cincy Canyoneers Society showed up.  Despite more thunderstorms in the morning that drove Colin and Ash off towards home (though they ended up hitting Crack canyon on the way) we went to Shenanigans' next-door partner, Foolin' Around, which  - while not quite as tight, is probably a bit more strenuous to wriggle through.  And then off to Ticaboo Mesa, home of the Dante Canyons and the Best Campsite in the World.

The Dantes are a series of five awesome slots all spilling down towards reservoir Powell from the campsite.  I had done one of them last fall with Colter, Tom McFarlane, and Brother Paul, and it only whetted my appetite to hit up them all.  They are not long, but they are dramatic: 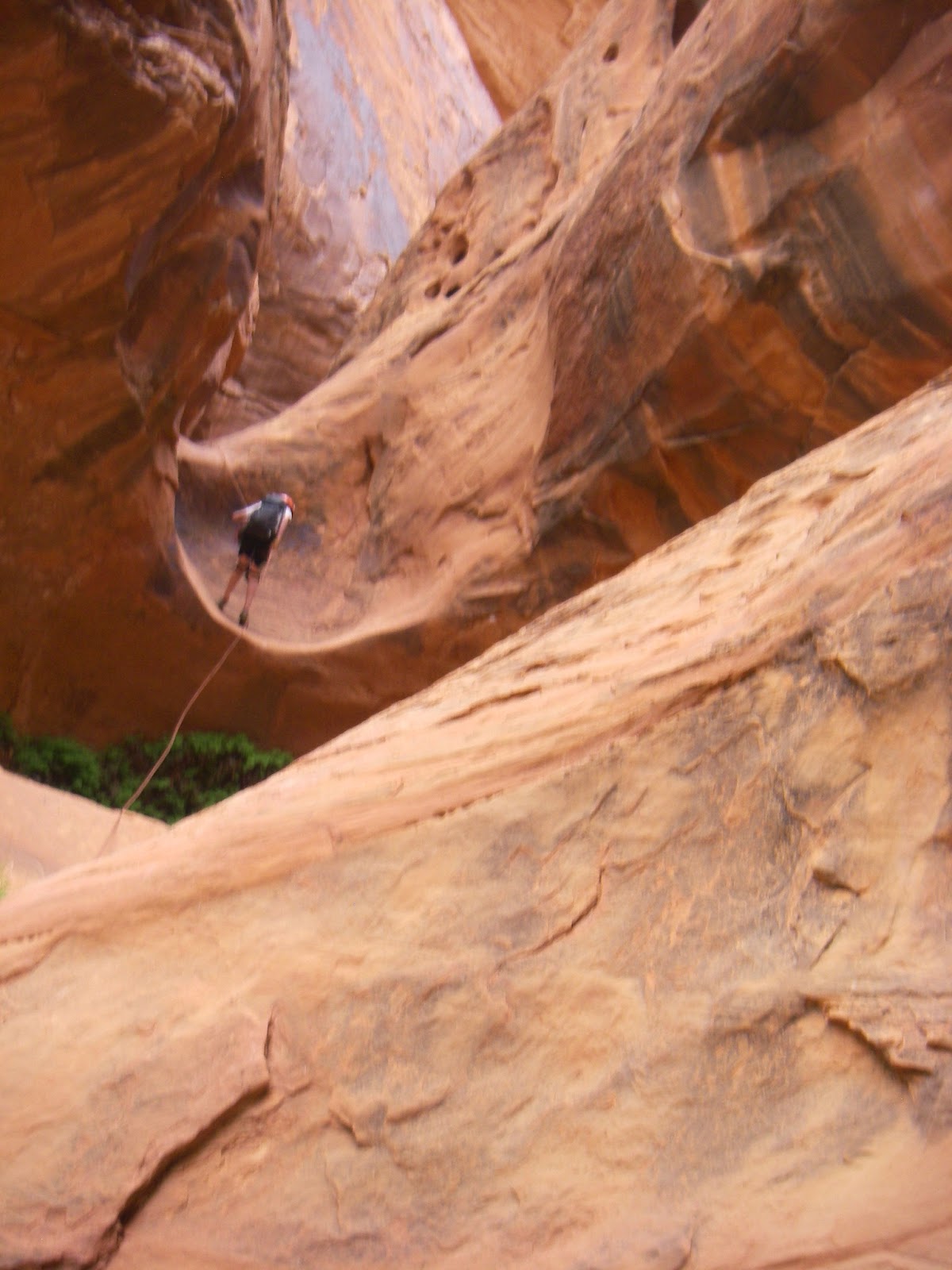 and the hike out is really dramatic as well: 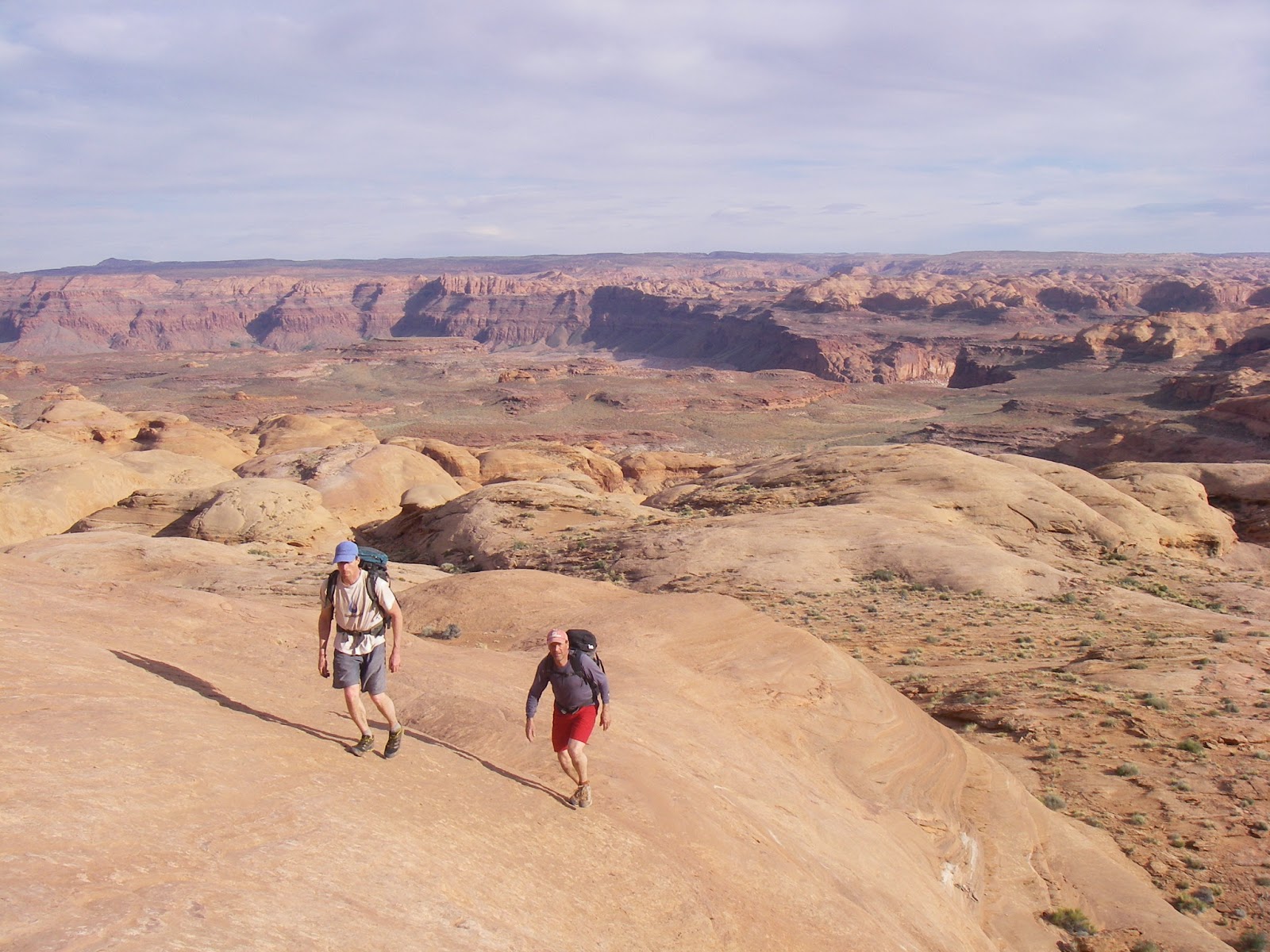 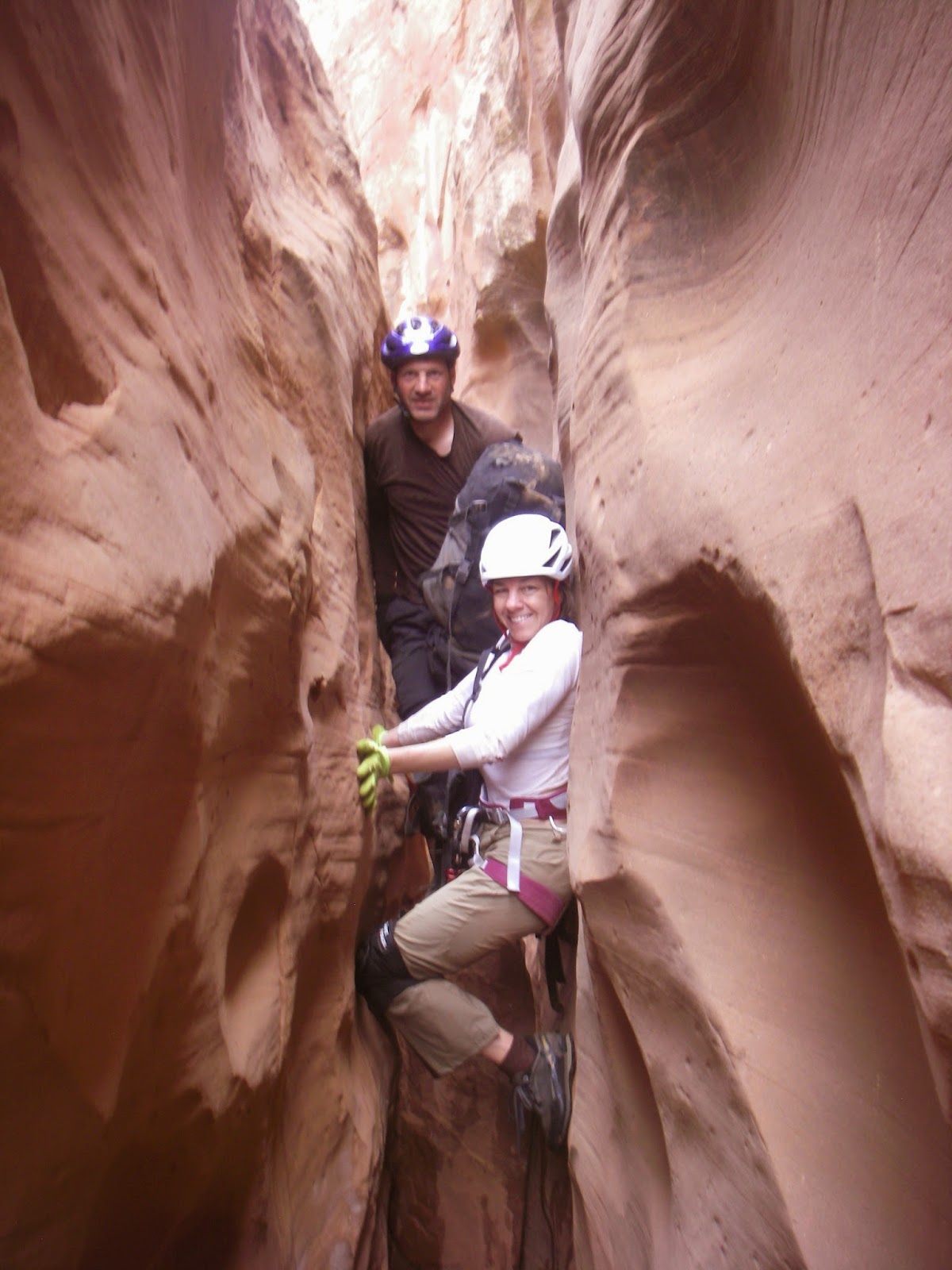 and the ever-smiling Sue going deep 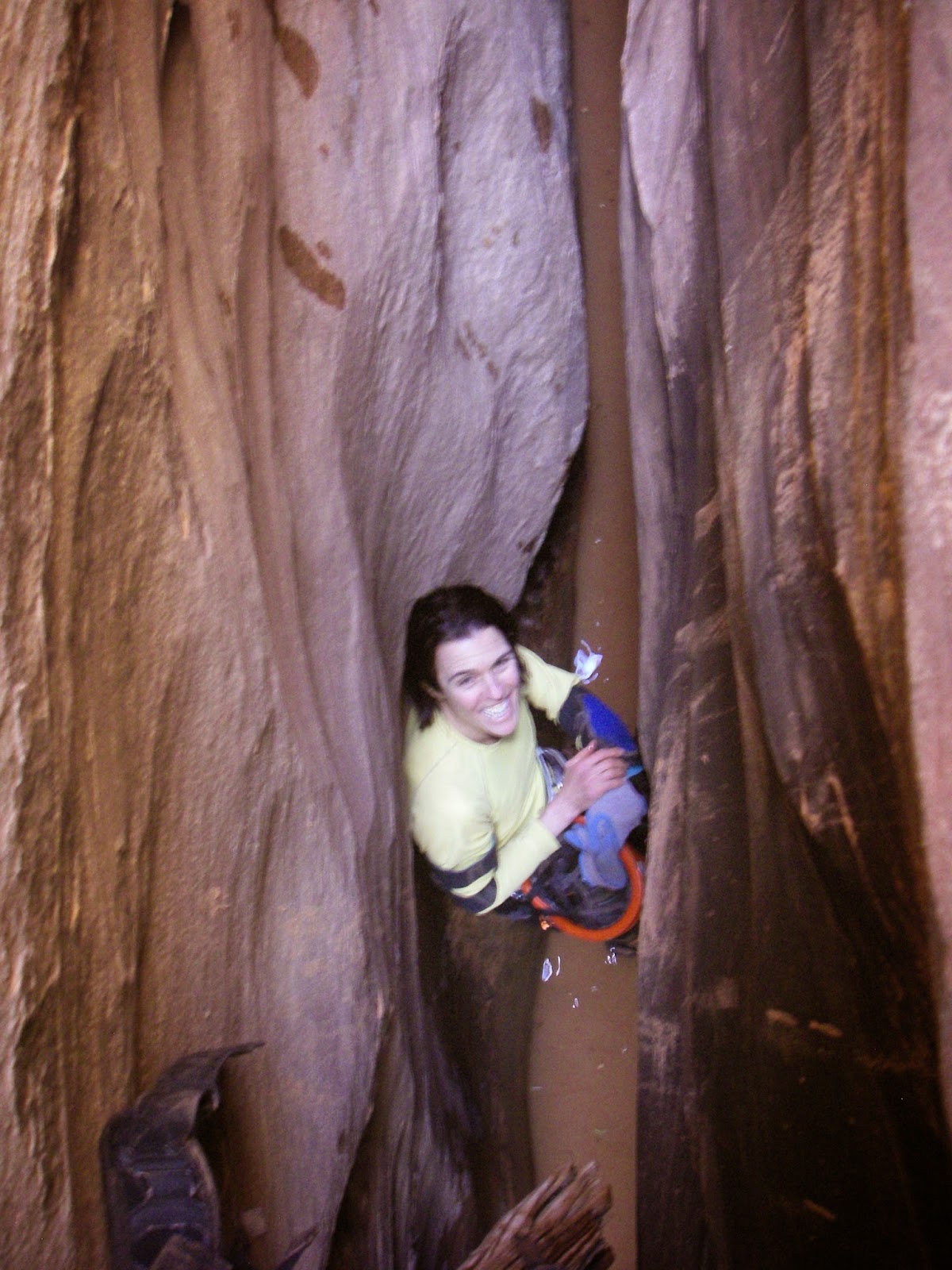 Dan preparing to cut all his fingers off going over the edge: 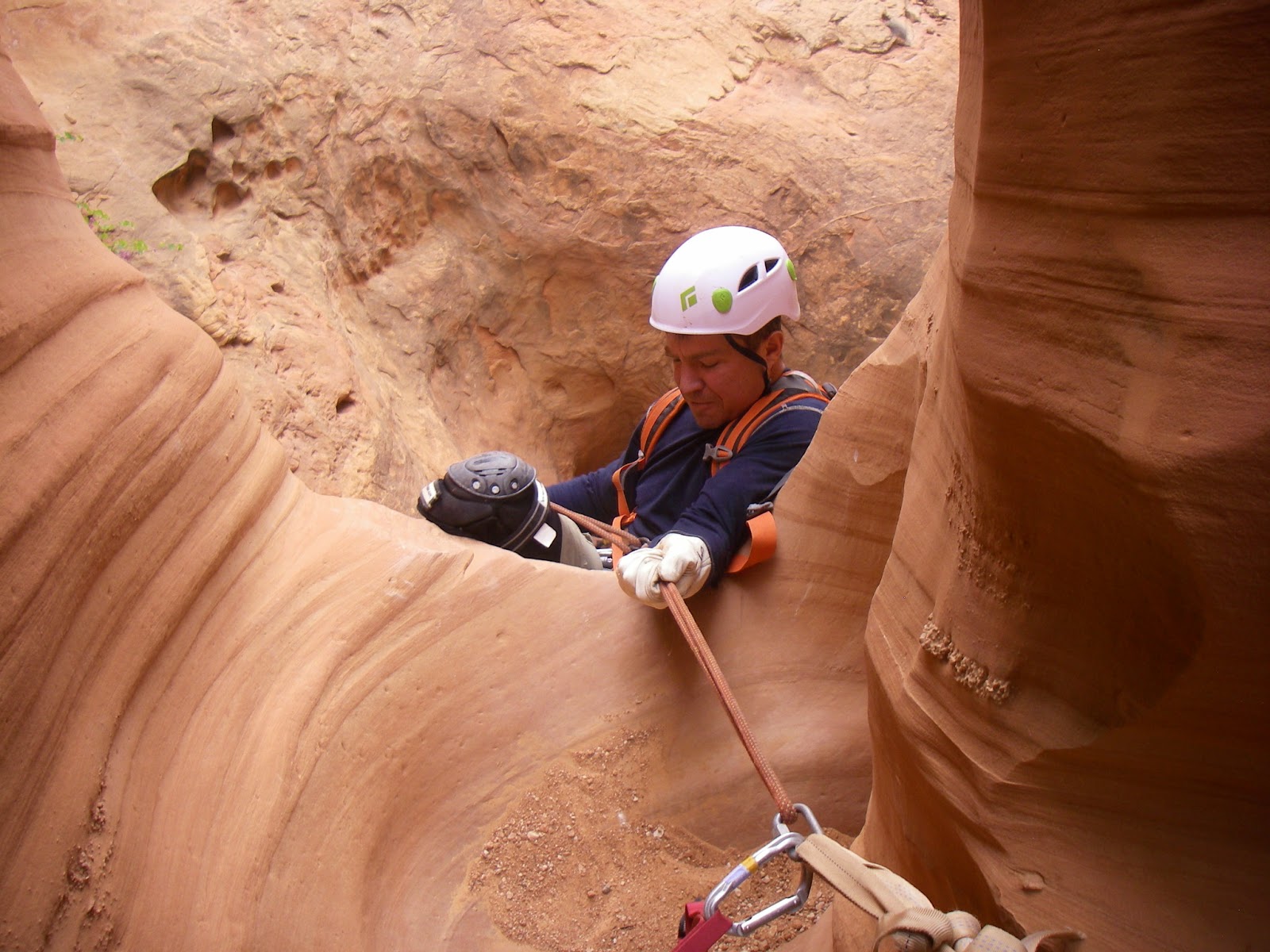 Mike had to give him a little hug: 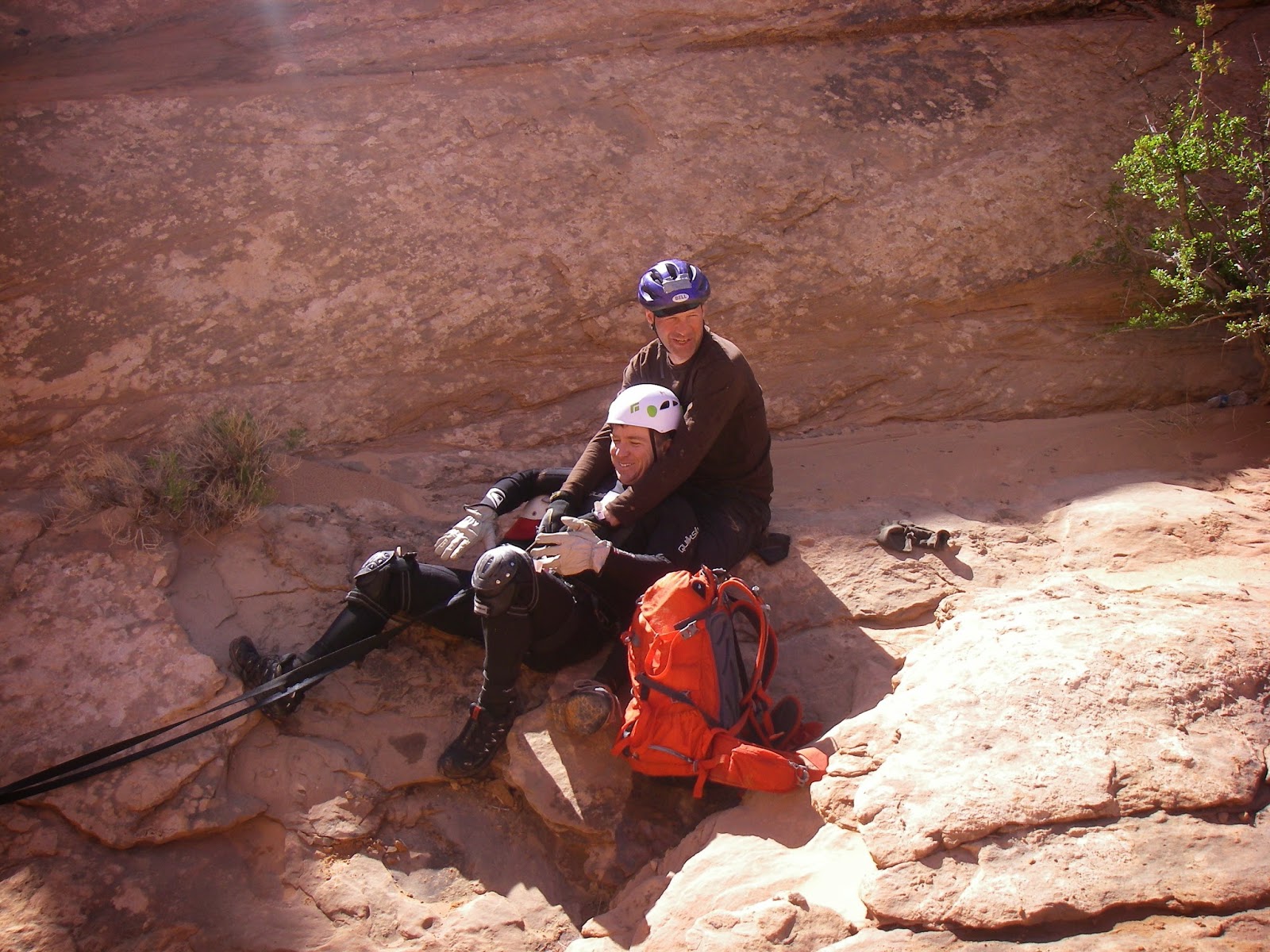 Three of the slots - Purgatory, Paradiso, and Devil's Thumb - are pretty straightforward, but the other two have some trickier sections.  Limbo has a stem that starts out maybe 10' off the canyon floor and then traverses over a DEEP pothole where the stem gets a little wider, but at least the wall your feet are on is a little loose and crumbly.  I made a slight error in traversing to the slightly-wider high rather than dropping low, and got a bit stretched out in the crux, so that all that I had touching rock were my toes and shoulder blades.  I was glad for my Pilates classes this spring as I was, uh..."fully engaged" at that point.  To alleviate this somewhat stressful situation I sorta slid/worked my way downward, pulling my shirt up my in the process so as to get the full value of the sandstone on my bare back.  I wasn't really giving Mike and Greg - who were right behind me - full confidence in the move, but at least they were able to identify what NOT to do!  I'm usually good for at least that.

Inferno canyon has some additional challenging sections, including some raps that lacked anchors, so we were pushed to "ghost" it with removeable anchors.
and in order to avoid a possibly-sketchy traverse over a pothole we elected to do an even sketchier 5.8-ish traverse high above the canyon floor.
The earlier thunderstorms and subsequent winds had died away, and the Best Campsite in the World delivered for the three nights we were able to be parked there 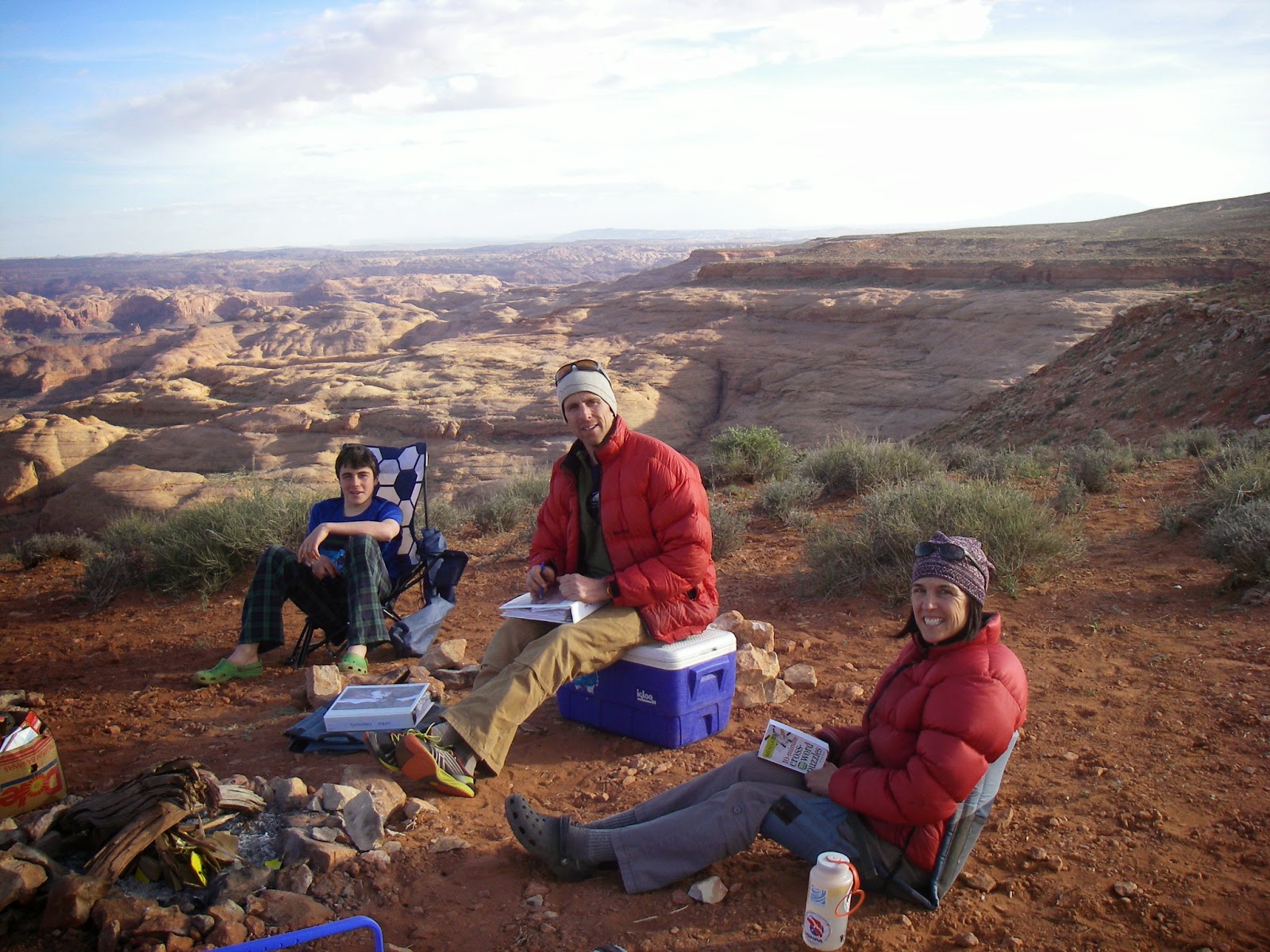 Near the bottom of one of the canyons is an Anastazi ruin: 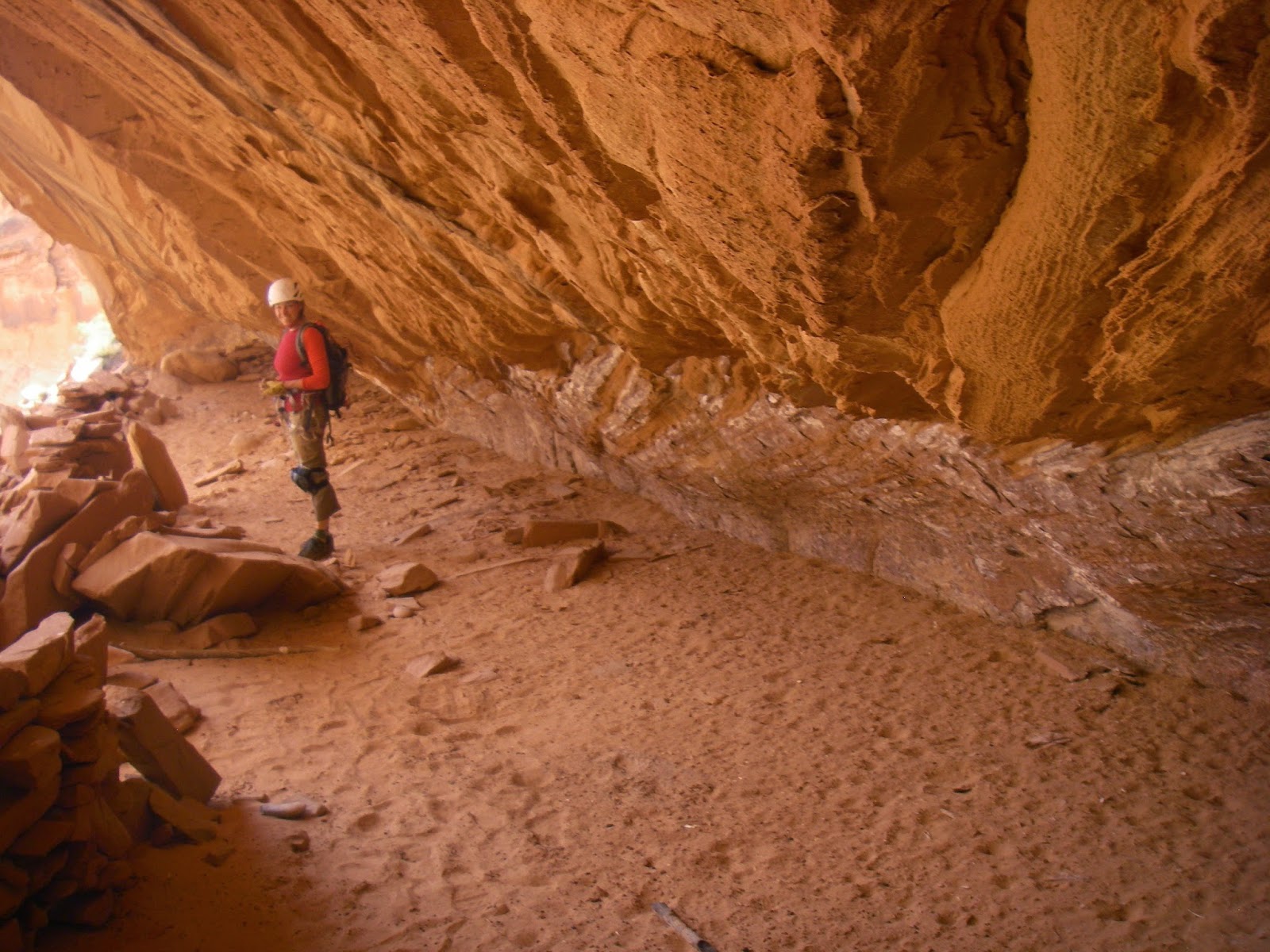 with a milling stone: 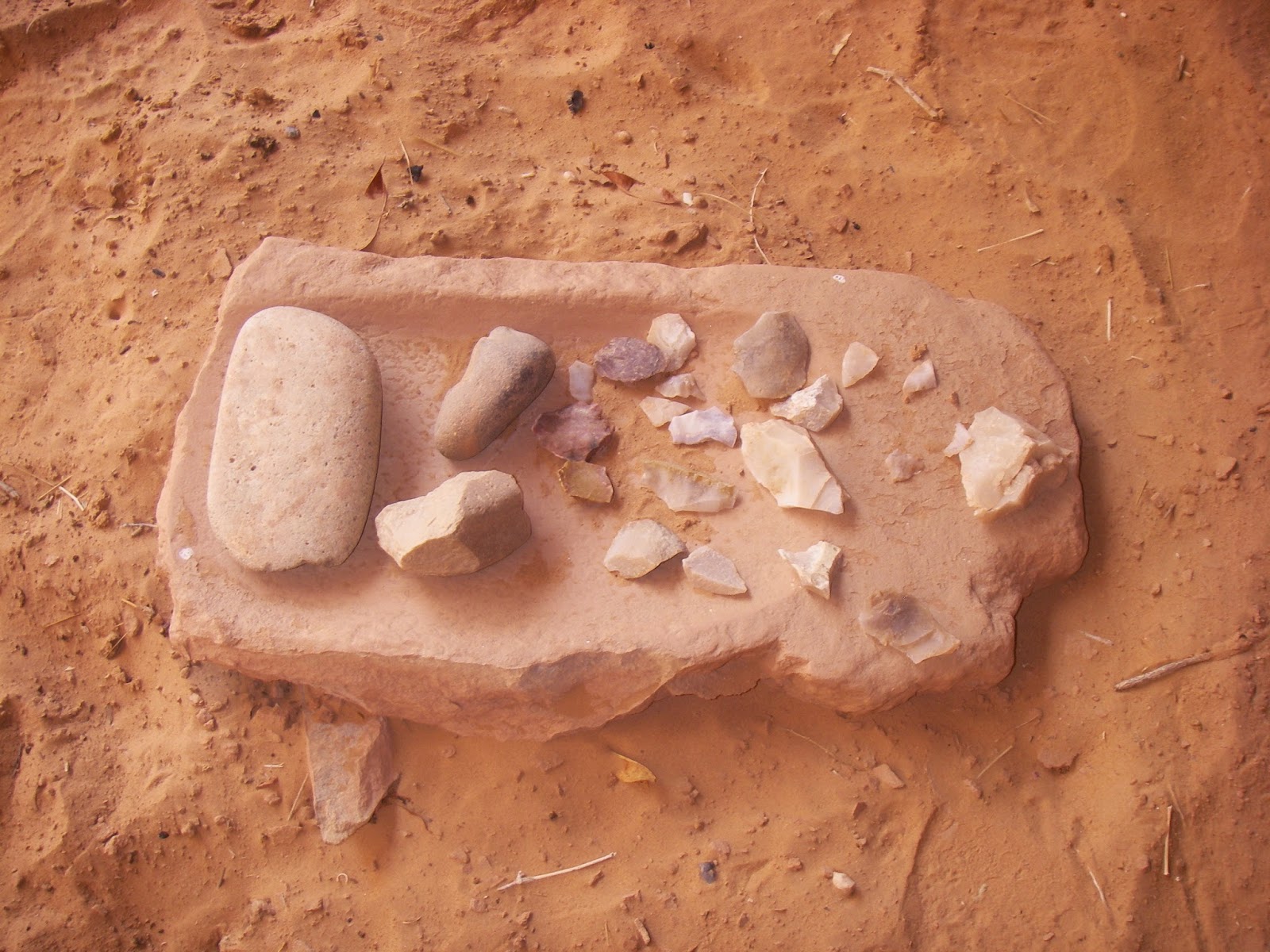 Because new rental cars are impossible to figure out - but aren't as sophisticated as my new i-phone that has apps that are able to detect low battery juice - we left some lights on in the car and Dan the tow-truck man and Greg were able to use Dan's exploded lawn chair legs to jump-start the rental....without getting electrocuted. 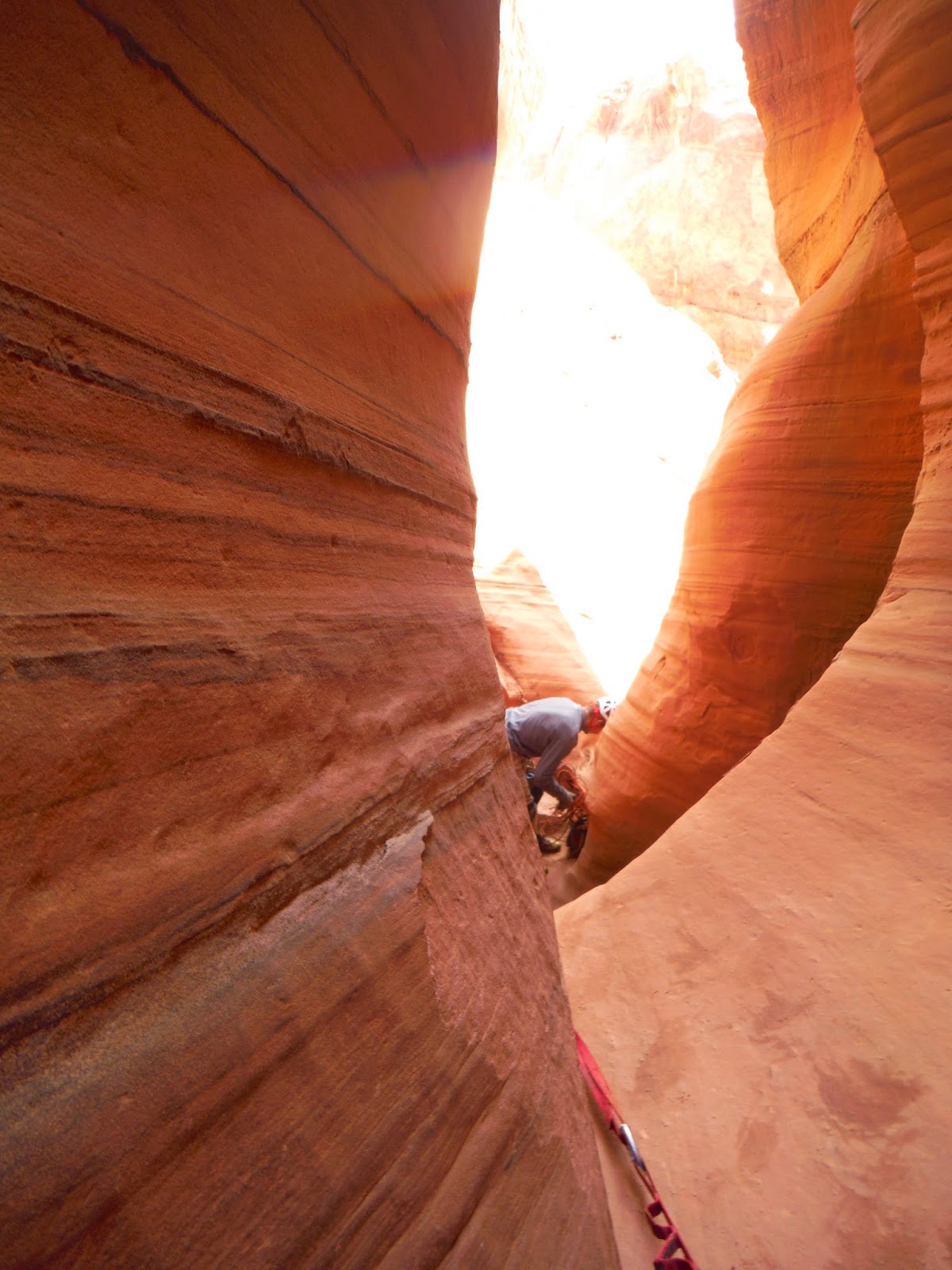 We then moved on to another sea of slickrock on the other side of Ticaboo Mesa for a fun figure-8 slot adventure (down one, up and out, down another, up to the intersection, and up and out a different canyon). 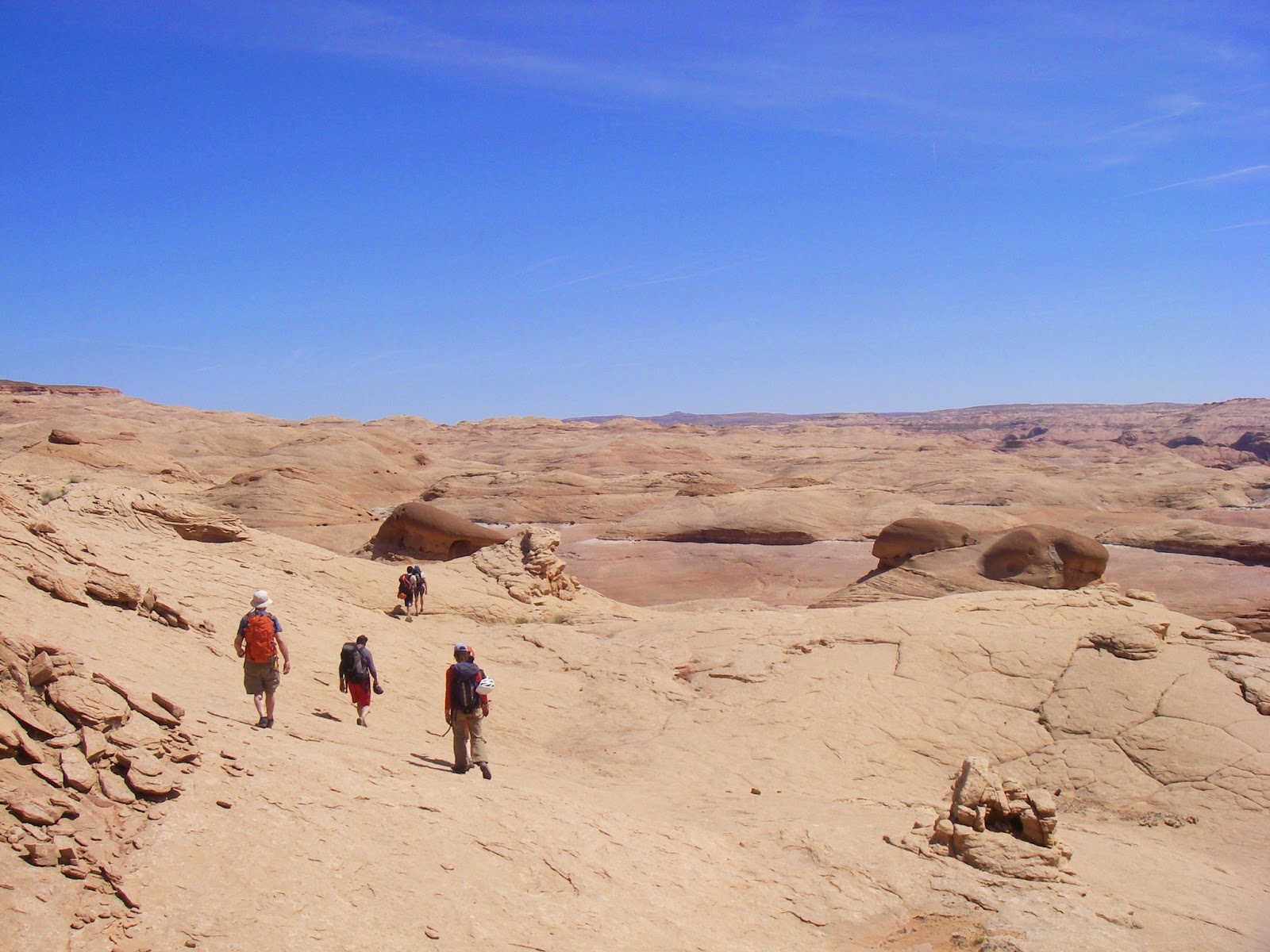 That had some skinnies 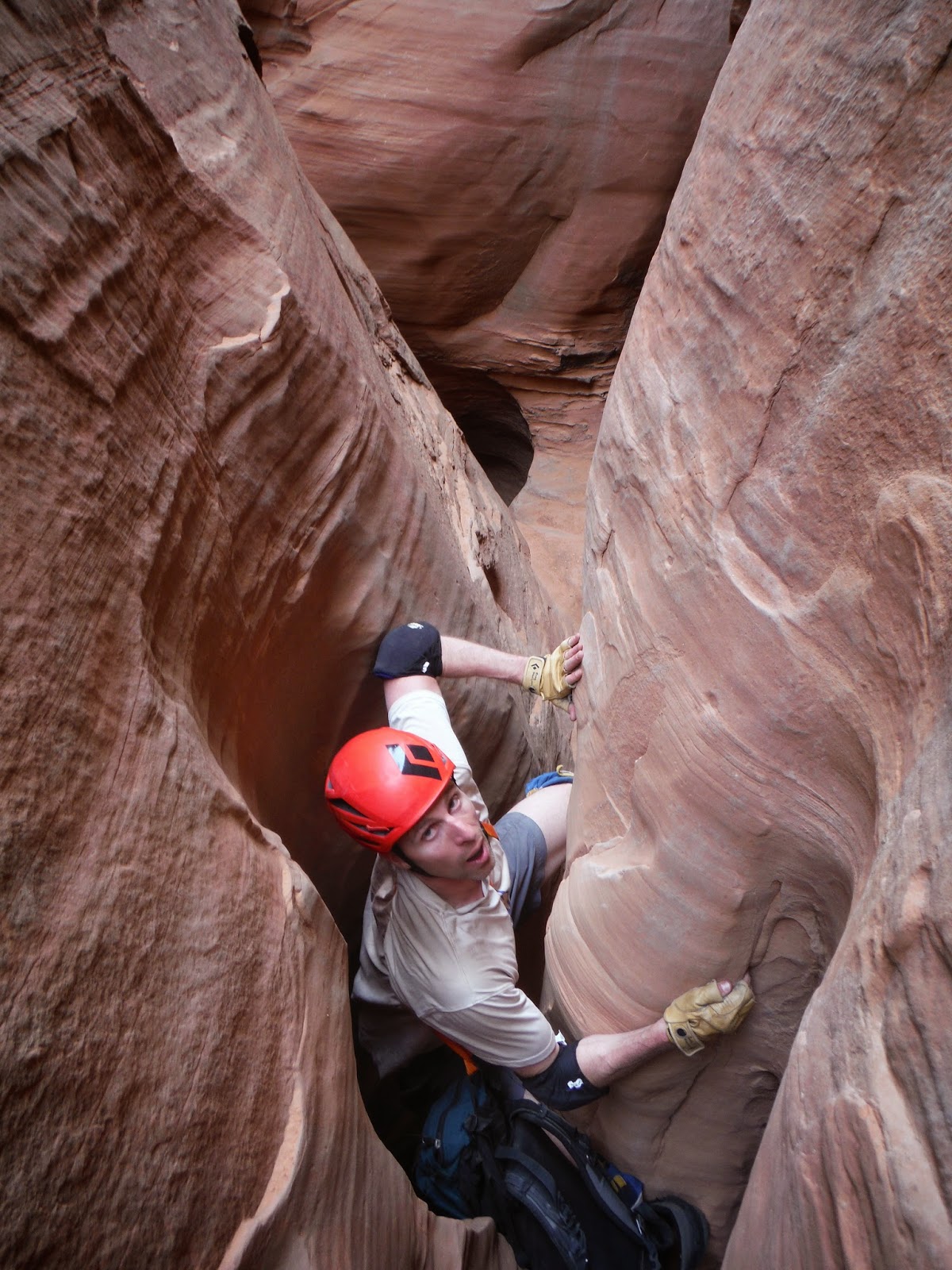 We then headed south to hit up Cheesebox canyon, which is a "must do classic".  And indeed, it's worthy.

As ever, a great trip with great folks.  thanks to Mike for some of the pics.
Posted by Tom Diegel at 7:43 PM 3 comments:


Recently a suit was filed by a group called “Wasatch Equality”  against Alta in order to force the (very much) “ski” resort to allow the long-banned snowboards, with the fundamental argument that because Alta operates on public lands they therefore have an obligation to not “discriminate” against snowboarders. I’ve been a little surprised that most of my peers have not expressed support for this concept, and I think that it’s an interesting, fairly complex case that brings enough of a local bearing on a landmark constitutional amendment that it begs a bit of blawgage.

According to The Wiki, “The Fourteenth Amendment (Amendment XIV) to the United States Constitution was adopted on July 9, 1868, as one of the Reconstruction Amendments. The amendment addresses citizenship rights and equal protection of the laws, and was proposed in response to issues related to former slaves following the American Civil War”,

It’s a pretty incredible amendment, actually, with lots of components that affect our lives every day:  Due process, the concept of citizenship, congress’ ability to enforce laws, and the limits of local governments that were the basis for both Roe v Wade and Bush v Gore.  And perhaps most importantly:“The Equal Protection Clause requires each state to provide equal protection under the law to all people within its jurisdiction. This clause was the basis for Brown v. Board of Education (1954), the Supreme Court decision that precipitated the dismantling of racial segregation, and for many other decisions rejecting irrational or unnecessary discrimination against people belonging to various groups.”  It is generally under the auspices of the vitally important fourteenth amendment that Wasatch Equality is using to fight for the right……of snowboarders.

You can see what Pat Bagley of the SL Tribune thinks of it: 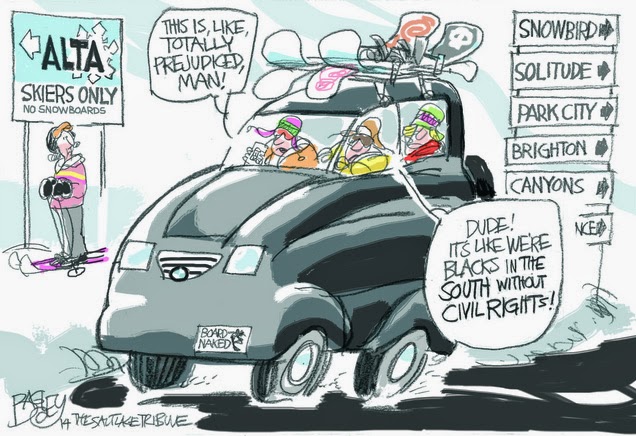 The variety of reasons that people don’t want snowboards there runs the gamut.  Here are a few, and my rebuttals:

a set of beliefs concerning the cause, nature, and purpose of the universe, usually involving devotional and ritual observances, and
a specific fundamental set of beliefs and practices generally agreed upon by a number of persons.

Well, I know a lot of skiers and snowboarders who ostensibly are so passionate about their activities that I would consider them to be “religious” about not only their sport, but the lifestyle – and life choices – they have made in the pursuit of (to carry the analogy a bit further) the subliminity associated with shredding untracked powder.

On a recent march up a skin track - birthplace of many a good conversation - Ashley made an excellent contradictory analogy:  say a chili dog vendor is operating on the South Rim of the , and a vegetarian comes up and says “I want a veggie burger.”  Because a concessionnaire is operating on public lands, is he obligated to serve all the potential customers who show up wanting a product or service that he may not provide?  And if Chuck’s Chili Dogs start offering veggie options, what happens when the Rabbi Elovitz visiting from NYC walks up and asks if his dogs are kosher?  A slippery slope (so to speak) for sure.  But one that would obviate a decision regarding a ski resort operating on a lease on public lands to do exactly as 423 of its peer ski resorts do very easily and effectively?

It’s interesting that this lawsuit was filed at the same time that unexpectedly leapt into the national spotlight for having gay marriage temporarily legalized (and starting today it’s being argued in front of the 10th district court in ).  Because fundamentally the situations are similar:

“I think that gay sex is ‘icky’" (according to a letter to the editor of the SL Trib the other day) "but that’s a weak argument, so I’ll come up with all these faux reasons to shut down homosexuality, and hope that my community will also feel that way and support me.”

As compared to:
“I don’t like snowboarders and snowboarding and what they do to the snow and I don’t want moguls to be that far apart, but I know that those are really weak arguments, so I’ll come up with faux reasons" (promoted and encouraged for decades by Alta management) "to shut down snowboarders, and hope that my community will also feel that way and support me.” It's not very different.

On a more personal note, I do hope that Wasatch Equality prevails because then the precedent will be set that the ski resorts also must allow another emerging activity that has been proven safe and easy to manage:  uphill skinning!  As it is, one local resort embraces it, three absolutely positively prohibit it in-season, and three have an obtuse, don’t ask don’t tell don’t bust non-policy……

It also is an issue that could loom large in the aforementioned One Wasatch plan; of the seven resorts that are included in the plan, two  - Alta and Deer Valley – do not allow snowboards, so despite the fact that – as Forrest Gladding points out – nearly 40% of US riders are snowboarders and 60% of riding families are of mixed riders, a significant population will effectively be unusually limited in their ability to take advantage of that “opportunity”.  I'm no marketing expert, but as Forrest also noted, trying to convince snowboarders around the country to go to only marginally snowboard-friendly but interconnected Utah vs spending their vacation dollars to go to open-armed Colorado might be a tough go for that 40% of the riding population.

So let’s see how esteemed Parr Brown attorney Jon “Charger” Schofield does when he trades in his jacket for his suit!  Could the Alta case go all the way to the "Supreme" Court?!?
Posted by Tom Diegel at 4:25 PM 7 comments: