The Middle Fork of the Salmon river is - next to the Grand Canyon - arguably the 2nd mostest premier river trip in the United States, and as such it can be hard to get a permit to float it. However, after the spring runoff the river level drifts gradually downward towards basal flow the popularity wanes, but there is still enough water to float a boat and there are dramatically fewer parties to negotiate with to share the amazing camps and iconic hot springs .  And fortunately brother Paul had the foresight to patiently wait out last year's government shutdown to get a late-season permit but still ahead of the hunting season.  Over the summer we met a crew who had done the trip the same week last year and had steady cold rain for the entire trip, but the rain hit before we arrived and with a nice forecast our motley crew of 7 leapt into our motley array of small rubber crafts into a couple-hundred cfs of water at Boundary Creek on September 21.
At high water the MFS can be fairly exciting, especially in the first few miles....
but it's mostly a bump-around at low water, even at notorious Velvet Falls a few miles downstream and the Pistol Creek rapid that looms 20 miles in.  We scouted each and bobbed through with aplomb.

The Middle Fork's notoriety comes from the float trips, but interestingly enough seems to get very little attention for its amazing plethora of backcountry trails.  There is a nice trail that parallels the river for 80 miles: 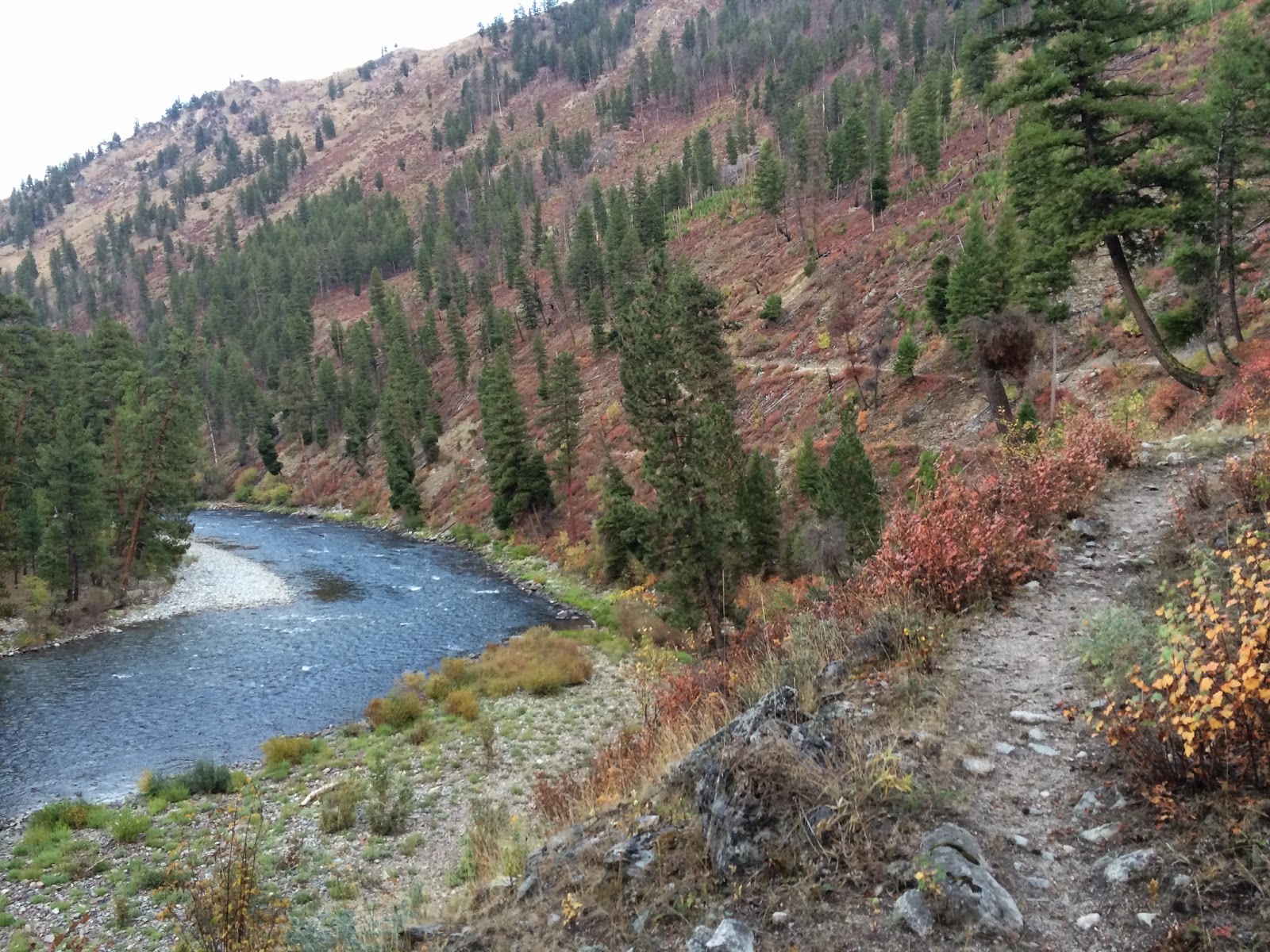 and there are a bunch of tributary drainages that have trails down to the main stem.   And there are approximately 1.24 million miles of game trails in the area that "game" have developed into pretty dang nice trails that wind up the barren ridges:
So even a very leisurely float trip can be conducive to geeky aerobic types; I went for a good handful of amazing trail runs, including a fast 14 miler up and back on Loon Creek that finished with a great soak in its famous hot springs.


The hiking/running possibilities in that area are so vast that it's quite reasonable to have a river/raft supported running trip, if one were geeky enough to be so inclined.  And the packrafting potential - especially with the presence of Big, Loon, and Camas creeks that are all floatable in their own rights - is high with great trail access to all.

But most of the time was spent bobbing merrily down the river: 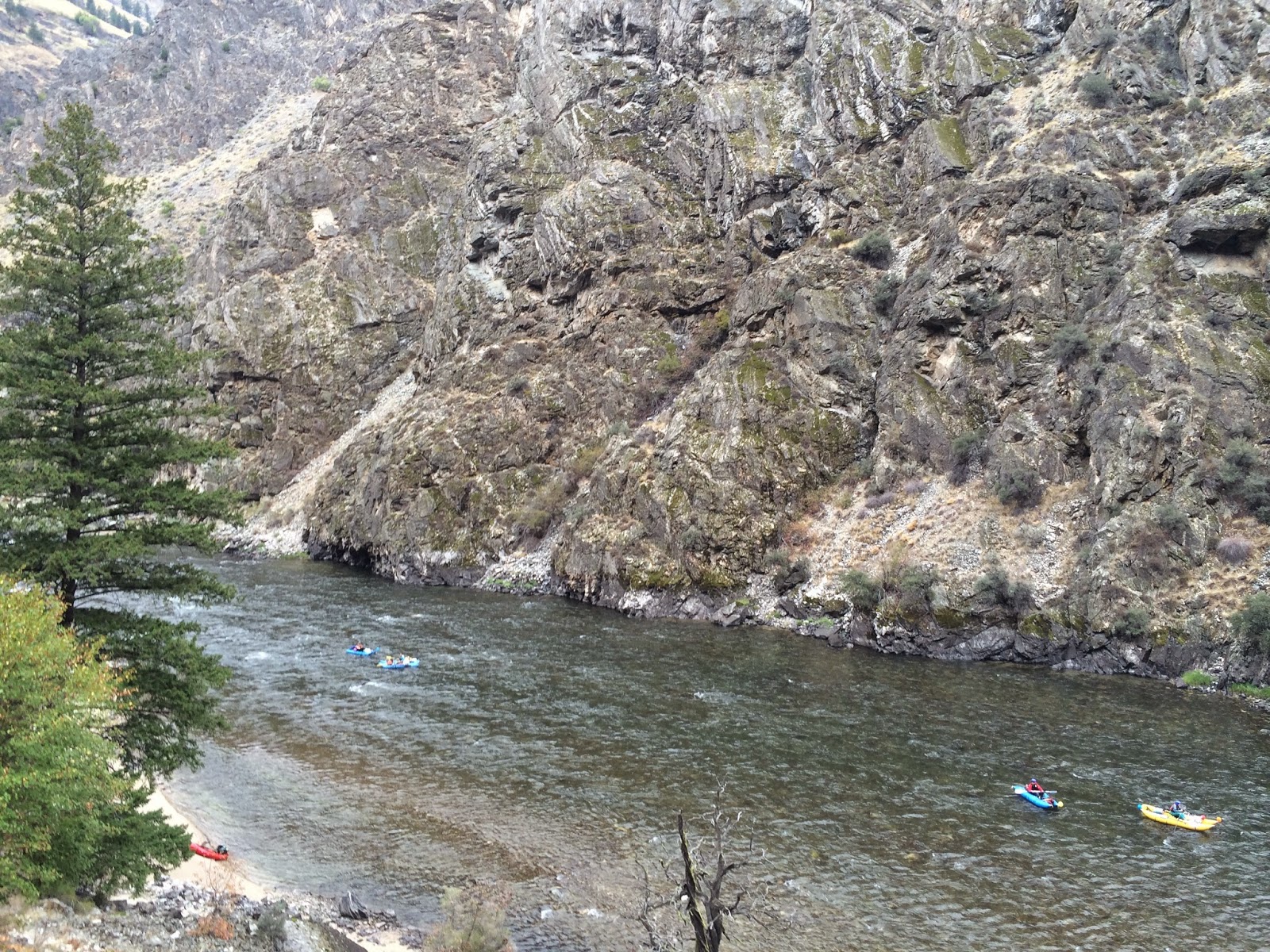 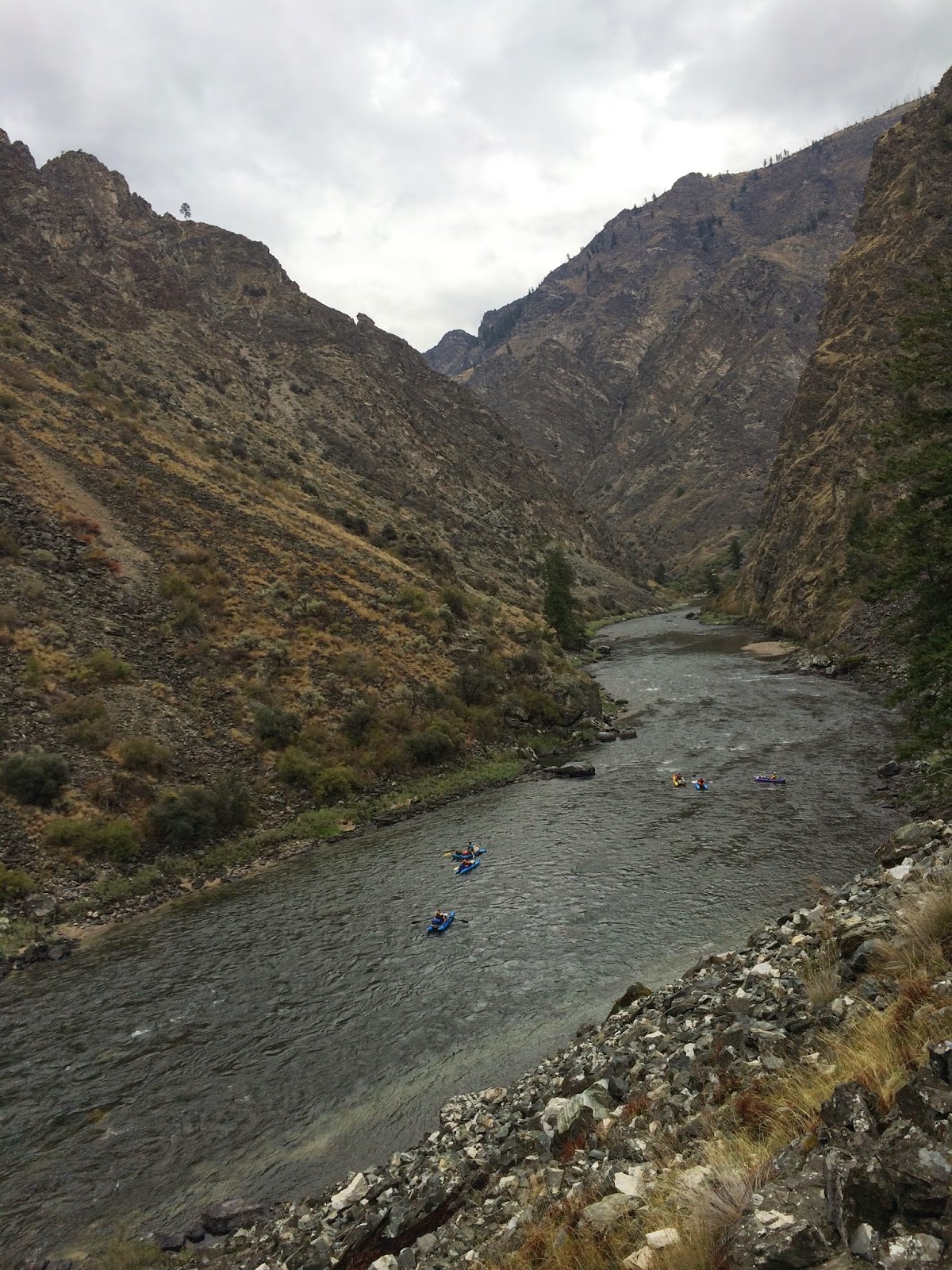 and fishin'
The Crew:


We had a little bit of whitewater action; this is Rubber Rapid:
And a bit above this I got a bit cocky in a bit more challenging rapid and flipped and swam!

Thanks again to brother Paul for yet again being a great trip leader and to the excellent crew for great yaps and yucks.

The Tushar Mountains have always struck me as an under-appreciated range; they soar to over 12,000 feet and are only 200 miles from Salt Lake, everyone drives right by them many times on their way to Zion or other points south, but few folks (at least, me!) ever seem to go there.  There are a couple of yurts there that we had heard access mostly-south facing terrain, the paved and gravel road Crusher in the Tushar bike race have given it notoriety in the bicycle world,  and the little ski resort there garnered notice when a couple of "ambitious" investors (they are now doing time in the Utah state prison) tried to make it into a multi-billion dollar private ski resort a few years ago (and recently-indicted former Utah attorneys generals Mark Shurtleff and John Swallow have incriminating ties to that deal).    But more importantly, our great friend Guy is overseeing a part of the freeway rebuild job in the nearby town of Beaver and is nearing the end of a 6 month gig there and has used the opportunity to crawl all over the Tushars from the ski resort condo that has been rented for him.  So before he left we wanted to take advantage of his newfound knowledge to explore a new (to us) range.

Even though I've had a knee that has been too sore to push pedals around for a month, one pain-free easy spin with Ash on the road bike early last week and a good thumpfest chasing Scott Martin around the Shoreline trail made me hopeful that more therapy of 4-6 hour rides three days in a row would be effective to appreciate some what Guy called "adventure riding" in the Tushars.  Utahmountainbiking.com's site reported that last year 6 miles of flowy trails were cut in, and indeed they are nice, but they are really just the conduit into the higher old school singletrack that traverses and criss crosses the mountains.

Here are a few pics:


Guy had to leave and the condo life was a lot less cheery as a result, so we decided to drive another hour south to do the famous Thunder Mountain ride, and add on the equally-excellent Cassidy trail loop as well. 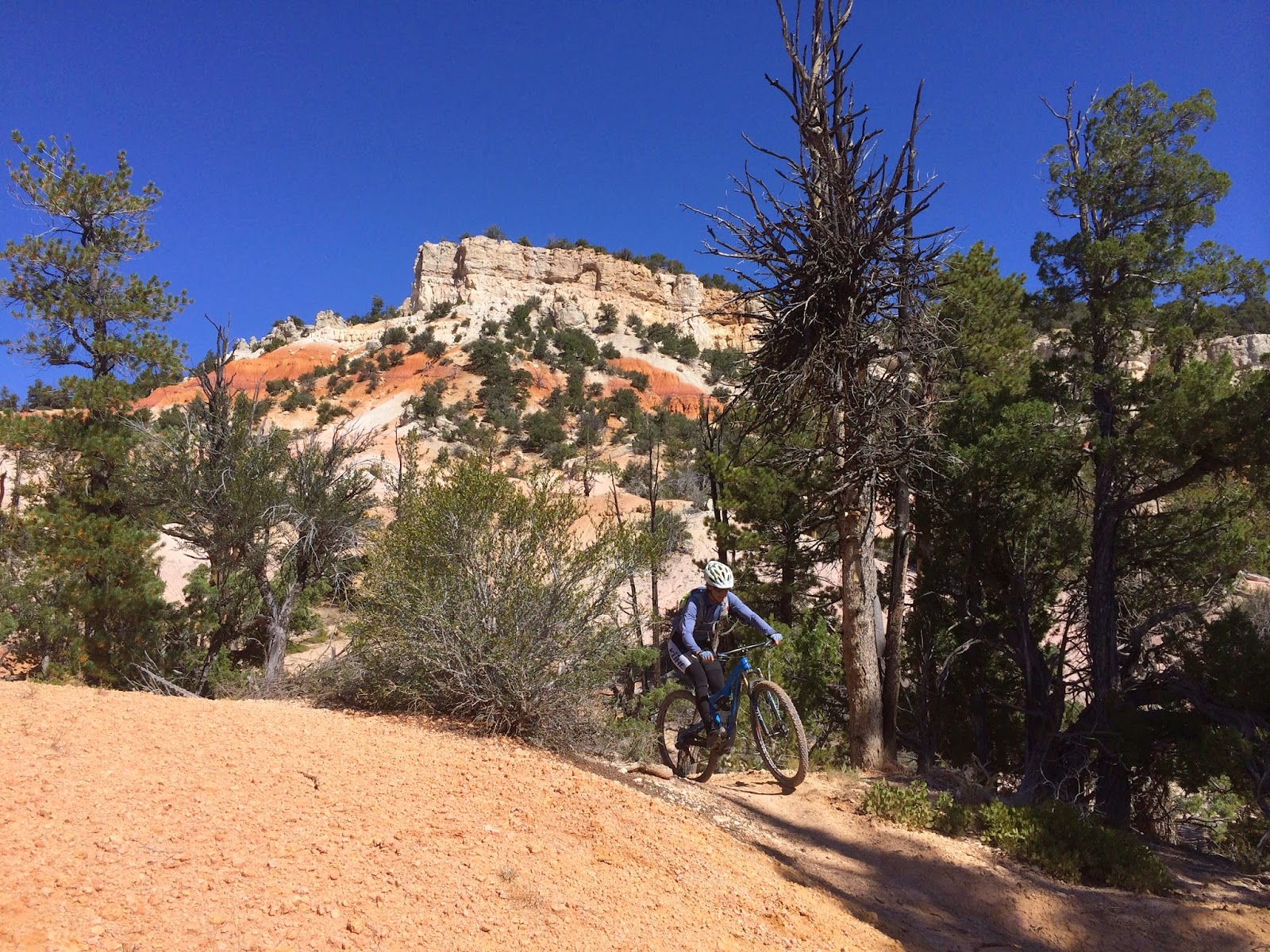 Thanks again to Guy for his hospitality and showing us his temporary home.  I think we'll be back next summer to do some high-altitude ridge runs; maybe a full traverse?

Posted by Tom Diegel at 7:58 AM No comments:

“Never doubt that a small group of thoughtful, committed, citizens can change the world. Indeed, it is the only thing that ever has.”
― Margaret Mead

This week we went to a house party/fundraiser for Doug Owens, a who is running for the US House seat being vacated by Jim Matheson against our own local Sarah Palin, Mia Love.  Ms Love made waves in 2012 by being asked to speak at the Republican national convention (to show how "diverse" the party was by having a black woman speak?) and coming within 700 votes of defeating a generally-popular (if frustratingly weak) incumbent.  She was the recipient of zillions of dollars from a right wing super PAC and put it to good use in a solid campaign, and when Matheson announced that he was retiring the SLC lib'rl community gave a collective heavy sigh and thought "and thus goes the last vestige of political sanity in this state" as her Tea Party Expressers would ensure that she would take that seat.

However, with an open seat there's no strength of incumbency, and according to this article:  http://www.sltrib.com/sltrib/politics/58284507-90/com-love-matheson-owens.html.csp  Doug Owens is  - before the season even began to kick into gear - "only" 12 points down on Love, which in that recently - and woefully - gerrymandered district is not that much, and notably the poll indicates that if Matheson were running again he'd likely win, so theoretically Mr. Owens "only" needs to show that he's as viable as Matheson.   In meeting him, we were impressed; though he hasn't run for office before he's articulate, sharp, no stranger to the political process (part of his career was as a DC lawyer and his dad was a well-respected UT Rep), has views that we believe in/respect, and - importantly - is a Latter Day Saint, which is very helpful in this state.

Not surprisingly, as a progressive thinker, he is not a fan of supply-side economics and the wealth inequity and subsequent social repression that it creates; as he put it:  "I'm not against people getting wealthy!  I'm against the middle class getting pushed down."  And when I asked what his solution would be for what seems to be this endemic problem I liked his response: "Education.  Smarter people make better choices", which from what I have read is spot on (A great read about this is "Deer Hunting With Jesus":   http://www.oxfordamerican.org/articles/2012/oct/09/book-review-deer-hunting-jesus/) and Mr Owens reminded us that one of Ms Love's 2012 campaign promises was to eliminate the US Department of Education and eliminate ALL government-backed student loans and grants.  In an era of infamously-high higher education costs, something tells me that not supporting lower education kids to get smart enough to go to colleges/universities/trade schools and then stifling economic opportunities to actually attend those schools won't really lend itself to a smart population that's able to make wise choices.

Among other things, Mr Owens talked about bipartisanship, but he also talked about "Tea Party Extremists" that were leading out country into a black hole.  I pointed out to him that many candidates love to talk about bipartisanship when it's convenient (on the campaign trail) but then fairly instantly become intractable once in office.  And his response was again acceptable, and indeed may be the only one:  " You just need to work on one person at a time"

Back in 2007 Ash and I had the opportunity to go to a fundraiser in Park City for a rising star in the Democratic party named Barack Obama.  It was $500 a ticket; needless to say, it definitely took a big gulp for our household to be willing to throw down a thousand bucks to fund a (wealthy) national political candidate.  But at the time we felt so disgusted by the too-many Bush years that we grudgingly acknowledged the need for individual financial support of candidates.  In the post-Citizen's United "Corporations Are People" era of unlimited campaign funds and a large chunk of the country harboring values/views that are so fundamentally opposed to our own and lawmakers who attempt to enact policies reinforcing those values I have become convinced that only voting is simply not enough.

I'm not necessarily a guy who volunteers for candidates working the phones, etc (I'm too busy being narcissistic!) but I feel pretty strongly that political "support" is the way to affect change, and the best way to show support is throwing down money for candidates you appreciate.  Owens' pitch  - which included a reminder that he's forsaking his career and putting a lot of pressure on his family to run an admittedly-uphill campaign - convinced us to give him $250, which was 2.5 times what we went there thinking we'd do, even though we don't even get to vote for him (due to the aforementioned gerrymandering).  We have an inkling as to how expensive it is to create effective media and get-out-the-vote campaigns (to affect folks who don't have the also-aforementioned education to even vote, much less make a well-informed vote) and we felt that our $250 is $250 he won't feel compelled to get from a corporation or a PAC, not to mention that the locality will mean it'll have a very direct effect on his campaign.

Recently I've had a few folks tell me that they are effectively so disgusted with "it all" that they are effectively checking out of the political process because it's hopeless and depressing.  For sure it seems like the only political news is bad news, and it could well be that come the morning of Nov 5 we will wake up to even more-depressing news, depending on your pursuasion.  I used to say "if you don't vote, don't bitch", but I have now come around to "If you don't donate, don't bitch."    If you have the money, write a check to candidates you like.  If you have the time, volunteer.