The first installment of a series of posts on our travels in Ethiopia.  The Blue Nile river trip came first, but the bike trip is now foremost on my mind and chronology doesn't really matter anyway.....

Ash and I connected easily at the Addis Ababa airport, and got onto a connecting flight to Makele, one of the capitals of Tigray, which is (maybe?) the state that comprises most of the north of Ethiopia.  I was a little concerned that the bike boxes might be too big for our plane, and after spending $400 to get our 2 bikes to Ethiopia it was going to hurt a bit to pay yet again, yet we were checked in with no mention of either luggage size or additional birr (the Ethiopian currency, which conveniently was devalued by the Prime Minister while I was on the river; good for exports (??) and tourists, but not great for the local economy.....).

Ash had a quick nap and a decent nighttime sleep and was ready to launch on our 100km first day.  As we rolled through town a guy came up behind us and said "where you go?" and I was surprised to see that he was on a pretty nice bike.  Turns out he's not only a road racer type but also a mechanic, and he insisted on giving me his phone number "just in case" we had some bike issues, which seemed like a good idea.
We rolled out of town and up the first climb we were surprised to see a small pack of full-on roadie guys doing intervals on the 1000' climb on the outskirts of town.  And even more surprised to see another posse, and then another.  Apparently Makele is a hotbed of road cycling, and it was odd to see these kitted-out guys on sweet bikes amongst the other rattletrap bikes that plied the town roads.  I tried to get a pic but they flew past us in both directions too fast for me to grab my camera!

It is not a solid Ash and Tom bike tour without a major mechanical issue to happen in the first bit (broken derailleur in Boulder, UT, a fallen-off crank near Price, a frozen freehub in Vietnam), and this adventure began accordingly.  I was rolling along when suddenly my rear wheel skidded to a stop, almost throwing me over the bars.  I glanced back and my heart sank:  a split rim. 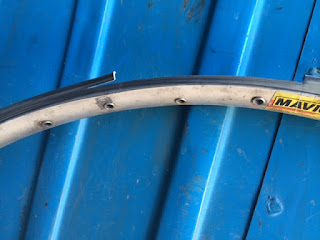 Old school (ie non-disk) brakes wear down rims  - especially in places like sandy southern Utah - and I hadn't noticed that my rim was deeply grooved.  The only fix was a new wheel.  I immediately thought of our new bike wrench friend Gigi back in Makele and I said to Ash "we gotta go back to Makele (knowing how much we both hate backtracking) but she said "call him and see if there's something ahead.  As always, she has wise thoughts, so I called him and he said the next town had a shop, and as I hung up Ash flagged down a passing pickup and we were on our way.

"Bike shops" in Ethiopia basically consist of a guy alongside the road with a toolbox.
We found that town's local guy, and he said "no problem", and next thing I knew he was stripping my wheel of spokes.  I've seen other people tape the new rim to the old and move spokes over, but apparently that's not the Ethiopian way.  Once he had it stripped he leapt on his bike, raced off, and a few minutes later returned with a brand new rim.  An hour later it was laced up and ready to go.  To be sure, it took a lot of finessing and I still have a bit of a lump-lump in the wheel - which doesn't help a butt that's lost its saddle-toughness after a month+ off the bike - but it spins, and that's all I need.  And I guess one gets what one pays for; the whole deal was about $10. 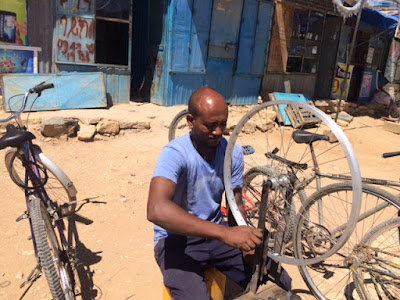 Back on bikes we continued to roll northward on a beautiful, uncrowded road (though it was the main highway) towards an area that was polluted with the "rock hewn" churches that this area is known for.  Around the 6th century as Christianity was taking hold in Ethiopia they decided to make easily-defendable and durable churches by digging straight into sandstone cliffs up high and building churches literally into the rock. As such, of course it's a big draw for dork tourist white people.   And also as such, it's a ripe area for a couple of phat lodges that cater exclusively to dork tourists, and we were headed for one:  Gheralta Lodge.  We knew that it was owned by an Italian couple and was nearly impossible to book due to its popularity, but when we rolled up we found that a large crew had left (by helicopter!) a day early and they were wide open.  We are suckers for these fancy eco lodges, and we had no problem throwing down plenty of birrs for the sweet place and delicious Italian food (due to two occupations by Italy, the "other" food in Italy is Italian, which is handy if cheesy white folks tire of injeera and roasted lamb).

We met a great English couple there; the guy is a surgeon who specializes in cleft-palate reparations; when you see those tear-jerking mailers from philanthropic NGO's who sponsor this surgery, this is the guy who is actually doing it! 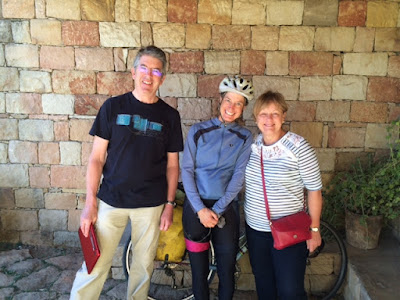 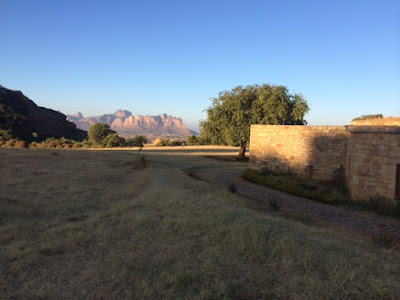 And the next morning we rolled down the road 10km more to the....next Italian-owned eco lodge with scrumptious food!  (complete with actual swiss cheese that had been hand-carried by other customers from Switzerland).


Given the fuzzy beta we had we hired a guide to take us to a couple of the churches.  These Christians earn their worshipping!  One involved a 1500' climb up a steep lower slope, a mid-cliff slot canyon, and then "moki" (Ethiopi?) steps carved into sandstome to ascend to the church. 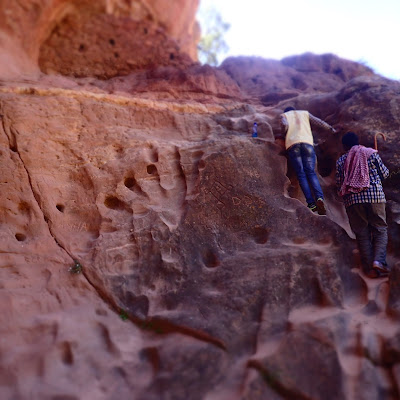 The other involved an easy fifth-class medium-length climb to a 2-foot ledge with a 200m vertical face below; not for the faint of heart (and we saw a few white folks who were a bit faint of heart).


The idea of digging into solid rock for a church construction method itself was remarkable, but the interiors were equally so.  Huge columns held the place in place: 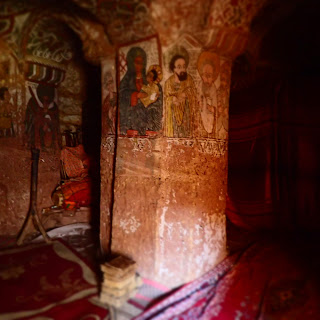 and the frescoes inside were incredibly detailed, colorful, and painted even on flat and rounded ceilings. 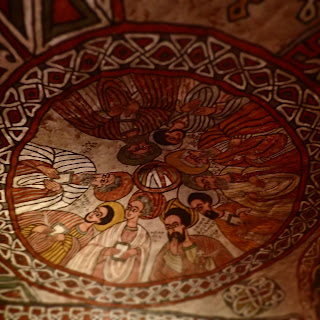 After a full day of rock-hewn church-ogling we retired back to the lodge for another evening of roughing it in the wilds of Africa.  And we began to plot our next move.  As I mentioned in part zero, prior to the trip we had paid a nice guy to help us create a good route in Ethiopia, but as we rode and the maps started to take on more life, we became recalcitrant customers and basically decided to throw out his route and do our own, despite our good rationale for hooking up with a guy who knows the country and the best bike touring pretty well.  Our new route would be a near-loop and take us up into the Simien mountains - which is one of the biggest/baddest ranges in Ethiopia and has lots of wildlife - and into the city of Gonder that has plenty of dork tourist things to see. And Dork Tourists we were:
Enough for now....more riding and touristo sights to come, and I'll also take the time to show some mappage to put Africa, Ethiopia, and Tigray into perspective.

Posted by Tom Diegel at 9:46 PM No comments: