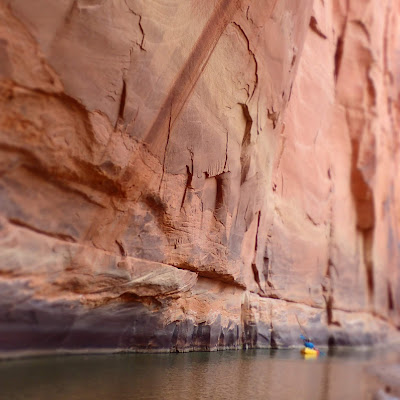 When Utah has a good snow year like this one skiers focus on the copious snow that fills in all the lines and provides many great powder days, but those skiers who also like the liquid form of snow as it tumbles down rivers start to scheme about potential river adventures as the snow melts.  Compared to great whitewater states like Idaho, Oregon, Washington, and California, Utah is pretty weak in comparison but there are a few great exceptions.  The Escalante River is one of the best exceptions I know.  So as this winter's storms kept taking the southern track and the long drought started to fade as the snotels across the state grew we knew that this would be a year to be able to plan on a trip down the Escalante.

The key to an Escalante trip is getting enough water.  The only real legitimate gauge is in the town of Escalante, and it doesn't really inspire confidence:  if you are lucky it'll be in the double digits (ie over 10 cfs; a mere trickle) and Pine Creek is a similarly-sized creek that comes in to double it to a still-uninspiring level.  So when you get to the highway 12 bridge over the river near Calf Creek the "river" (in most states they'd call it a creek!) it almost always looks barely-floatable.  But only 6 miles downstream Boulder Creek comes in which typically helps a lot, but....you aren't really sure, because the G-dub Bush administration decided in it's infinite wisdom that an effective cost cutting measure for the US was to take out the Boulder Creek gauge in 2005 (I'm sure that my taxes that year reflected that big savings!).

Compounding our attempt to forecast the flow this time was....the forecast: a well-advertised cold and wet storm system was marching across California, Nevada, and western Utah, and since the watershed of the Escalante includes the high elevations of the Aquarius Plateau and Boulder Mountain, the potential existed for the flows to get totally shut down by high elevation snow, but at least it'd be cold and rainy on the river.  I have now lived in a quasi-desert now for 20 years and made innumerable trips down to the real desert in southern Utah innumerable times, and I'm always amazed at how many times I've been affected by storms there!  But once we were in the 'hood with our gear and devoid of any other "bad weather" options anyway,  Ashley announced "WE ARE GOING!"  And thus it was.

Scott Martin was a river guide on Cataract Canyon for a few years many years ago and had heard plenty of tales of floating the Escalante, but being a guide, then a committed working stiff, then a family guy with a huge raft (that would barely fit inside the entire Escalante riverbed) he'd never been able to put it together to get down the river.  But the many hours in the skin track thinking about the storminess down south got into his head, and he got a rare unencumbered pass to spend the week+ with us, which was a treat.
So the three of us piled out of Scott's rig at the highway 12 bridge over the Escalante, took a look at the river, declared it enough water to float a boat, and after a quick shuttle (Scott's theory on driving washboards - of which the Hole in the Rock road is infamous for  -is to drive fast enough to skim over them, and it seemed to work) we floated on down.  Fortunately the upper section of the river is mostly a single channel, and it was easy to skim along in our Alpackas that have very little draft (they stick down only a few inches).  As predicted, a cold rain began to fall, but - starting a trend that would continue for almost a week  - about the time we were ready to stop we spied a nice overhanging camp. 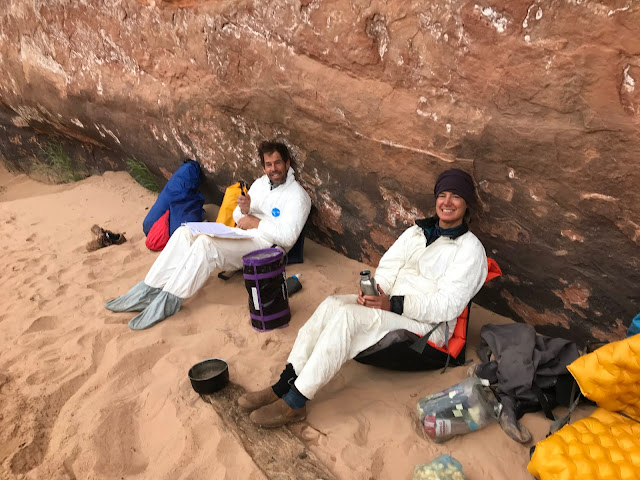 Overhanging camps are sheer magic.  I've spent plenty of nights in tents in the rain and it's fine, especially with a more-spacious Black Diamond Megamid, but rock is dryer than nylon, it's great to be able to walk around under an overhang, and in addition to feeling snug, you also feel smug that you are warm and dry while it's pouring just inches away and you are still outside.

We woke in the morning with no change in river level and we were only a quarter mile above Boulder Creek, which as anticipated was a nice aqua contributor.  Yep, it was on the cold side  -esp for mid-May, when the typical temps are in the 70's - but as Ash put it, that's why we spend a bunch of money on expensive clothes.  And we were able to find a huge, fern-lined overhang a couple of hundred yards up a side ephemeral stream with a nice pool to supply water just as the afternoon rain started to kick in again.  We reveled in our overhang smugness as we sat in the dry sand with some appetizers, played some scrabble, watched the rain fall a hundred feet away, and wished we had a frisbee to cavort about under our overhang. 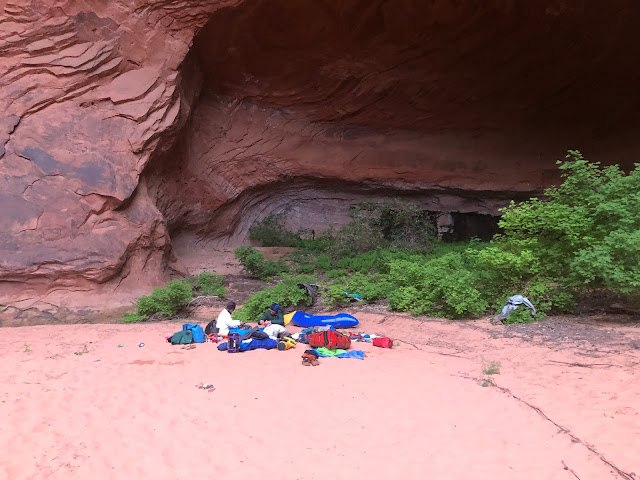 I had assumed that the pool we were near was a function of the springs that also fed the prodigious ferns that stuck out of the wall, but as so many times in nature, we way underestimated natural events.  As I was facing the pool an hour or so after it started raining, very abruptly - like the hand of God turned on his bath faucet -  a huge blast of water suddenly shot over the wall 200 feet over our heads and created a thunderous waterfall (ala the famous "Butt Dam Falls").  We were safely out of the way of the pool and the outflow, but it was so big that it was created a ton of spray off the pool that was washing over us, so we scrambled away (we still had plenty of room under the overhang).


Though the rain stopped the draining did not, and the waterfall raged all night. Fortunately, even with the enhanced acoustics of our copious overhang and the volume of water making a deafening noise, it was a "white" (so to speak) noise that was very sleepable. However, I fell asleep with a bit of unease; if we were getting that much water, in our little streamlet, how high would the river get?

In the morning we got our answer; the river had come up a lot.  We put on and floated on down a bit, and we weren't on the water long before we saw some lightning flashes with and quick peels of thunder and soon enough the big water droplets started getting even bigger and harder, so when another overhang presented itself we ducked under it: 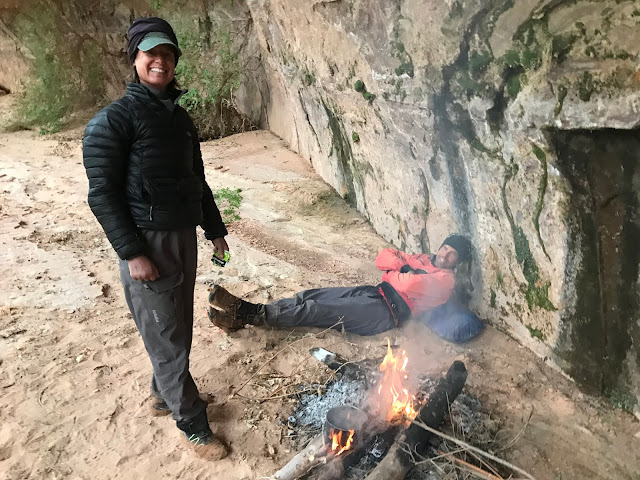 just as the inevitable hail began pelting us. 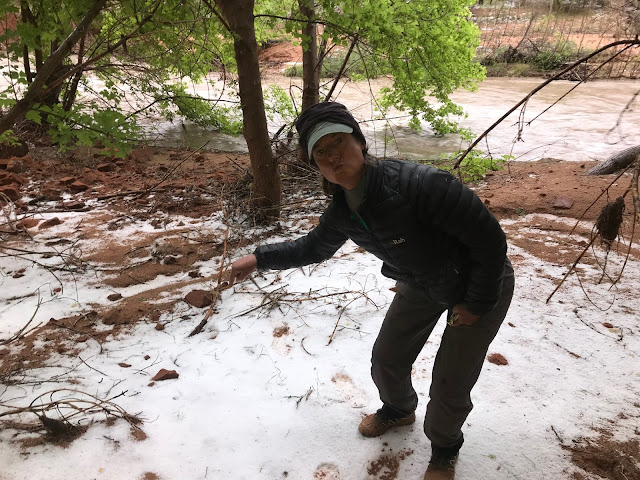 Getting an inch or more of hail didn't warm up the environment much but we were again pretty smugly snug in our overhang, so we decided to hang a bit, and about the time we were settling in a party came barreling in, and they were in fairly bad shape. A couple of them had swam several times (they were in an Alpacka Forager, which puts the paddlers up pretty high and thus closer to hanging branches) and were super cold and relished the opportunity to get out of the weather, have some tea, and warm up before heading downstream.
The river peaked shortly thereafter and then dropped quickly to a fine floatable level, and we slowly worked our way downriver, still taking advantage of the overhang camps: 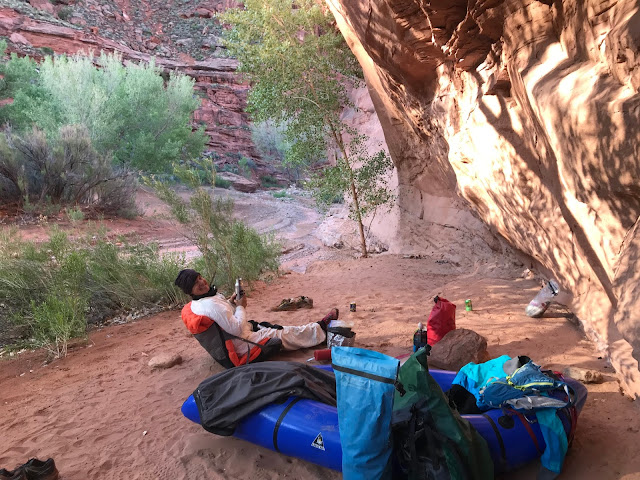 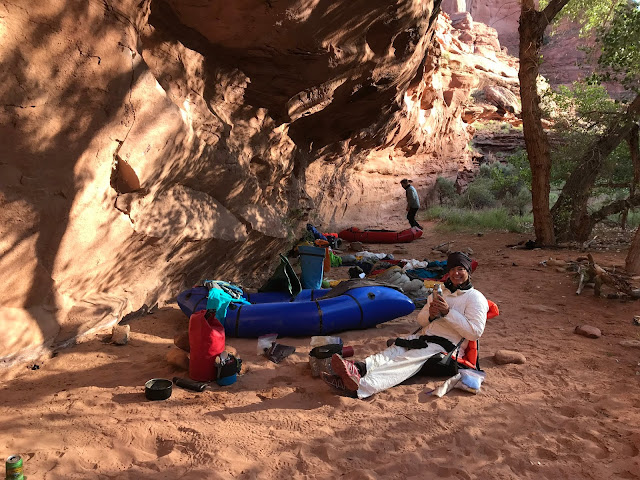 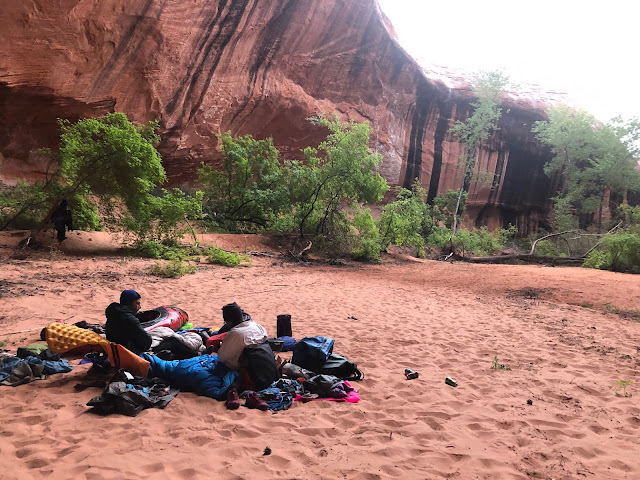 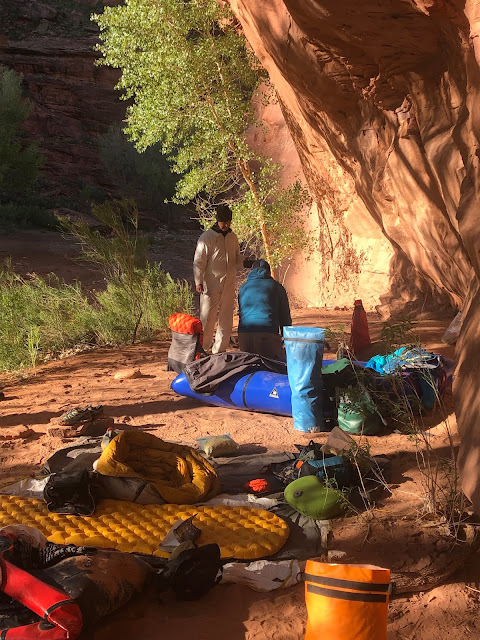 From the highway 12 bridge to the most common takeout at the mouth of Coyote Gulch is 75 miles, which doesn't sound like much for a 9 day trip, but the beauty of the Escalante is the myriad of spectacular side canyons to explore, and because the canyon isn't very deep, there are a fair number of opportunities to get up high, sometimes using "Moki steps" - small holds chiseled into the sandstone that the Anastazi/Fremont natives put in about 800+ years ago. 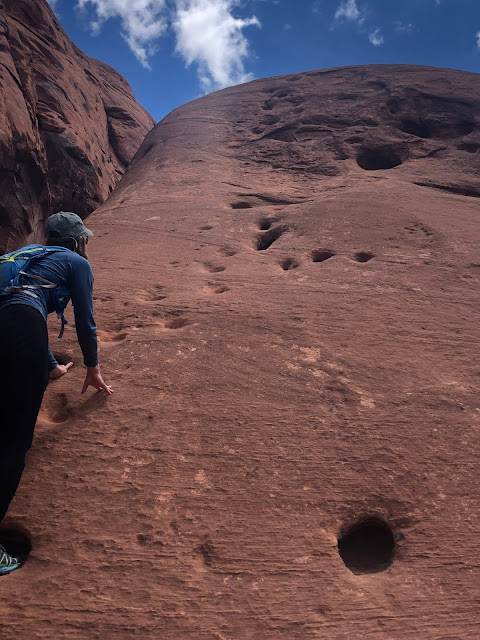 The canyons all have their own characters, and the opportunities for adventures is literally endless (Ace Kvale and his Desert Dawg have tried as hard as anyone, as seen in this video).   Here are a variety of representative hike pics: 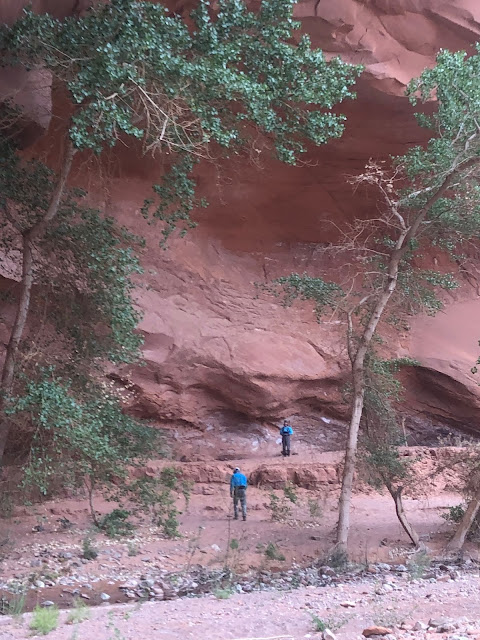 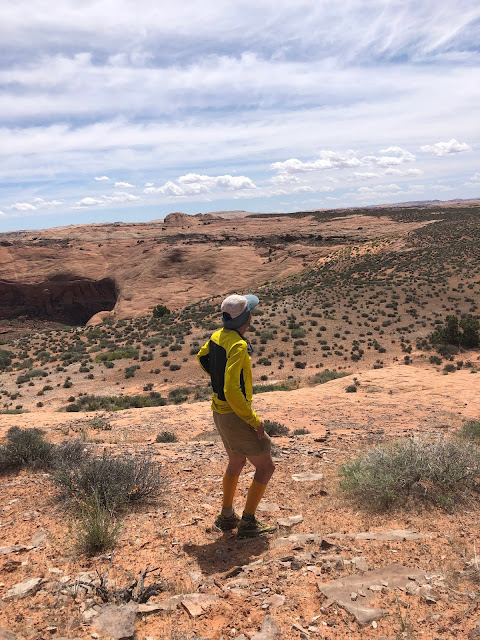 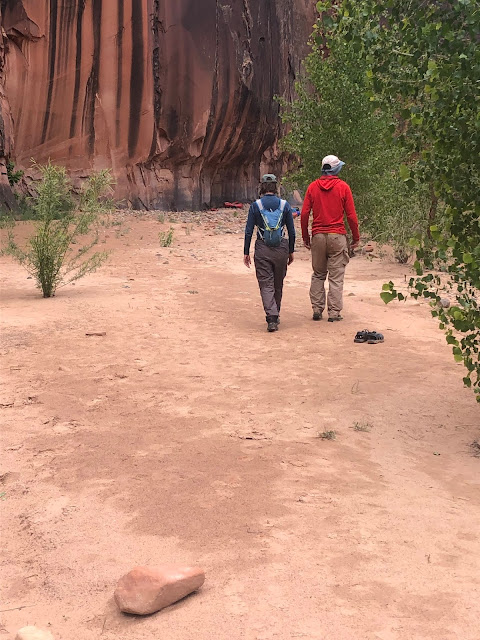 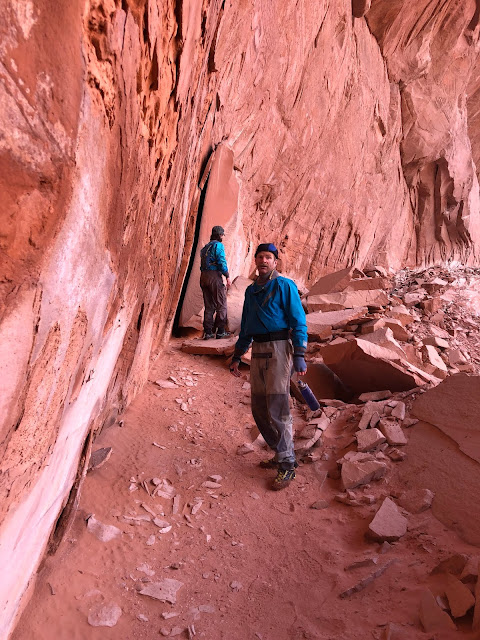 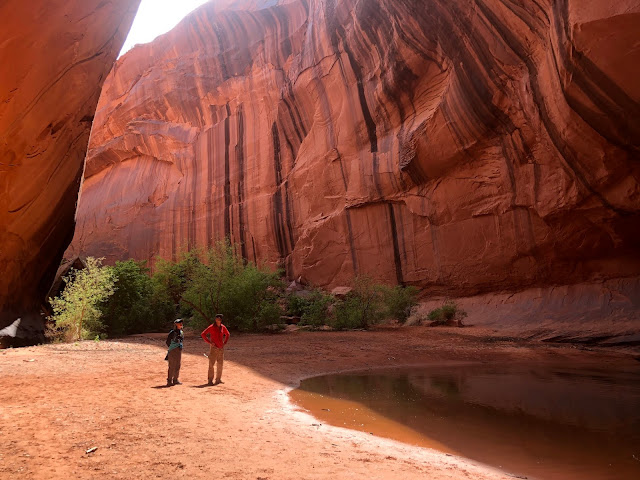 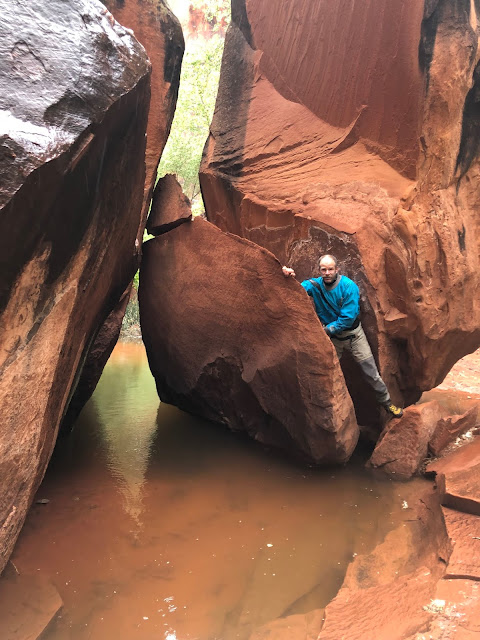 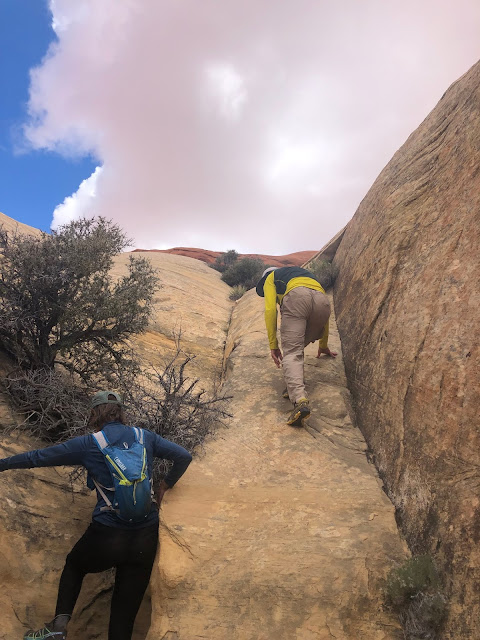 And of course, we paddled too: 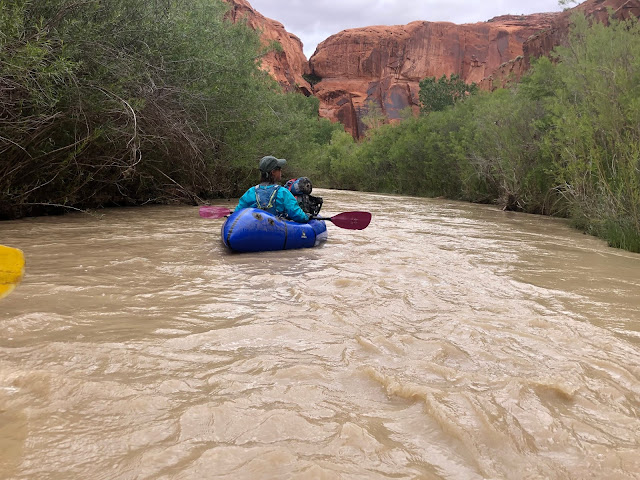 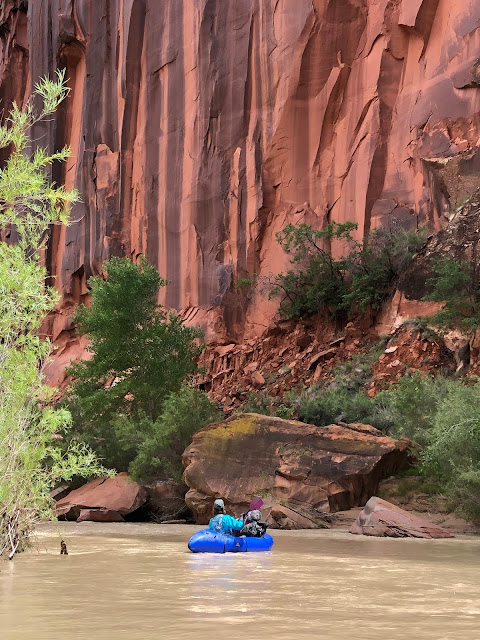 And fortunately, I had a map to navigate our progress:

The improving weather enabled us to have some non-overhang camps 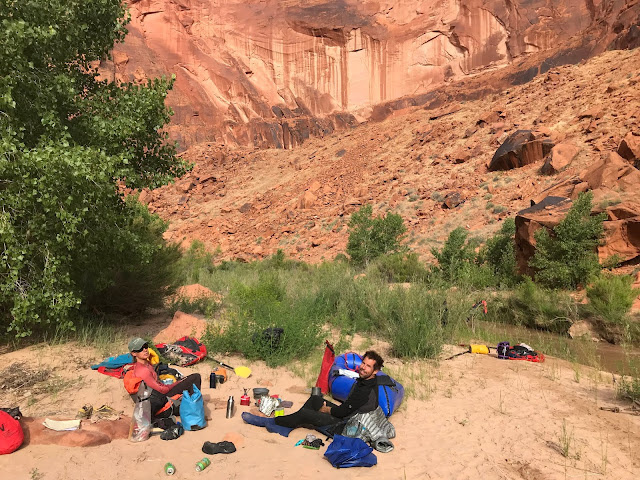 (overhangs get a little thin in the 2nd half):
And to prove my theory that a good way to get away from crowds is to do something stoopid, since we put on as the Big Gnarly Storm approachethed we literally didn't see another human bean for a week, until we were just a coupla miles from Coyote Gulch.

You'll note that in a few pics we are sporting very stylish white suits.  More on that later, but suffice to say I felt immensely stylish indeed:
And Scott was able to get all artsy using the medium:
The dez is in full bloom this year: 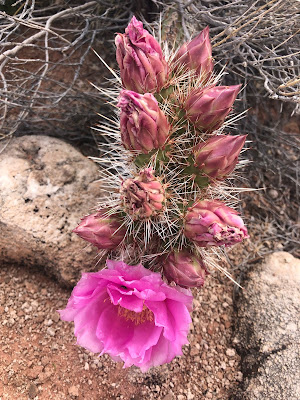 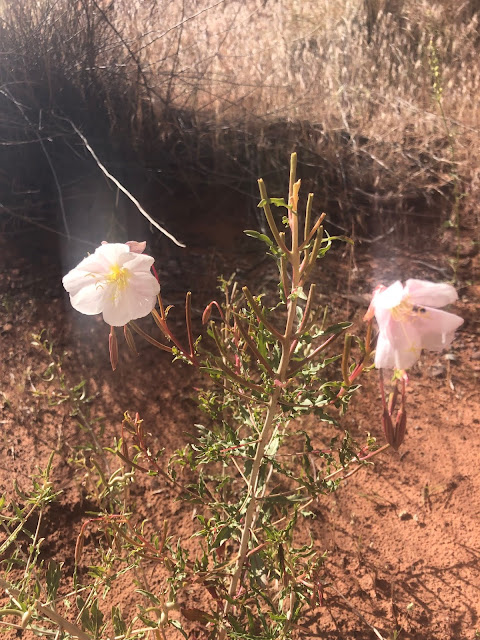 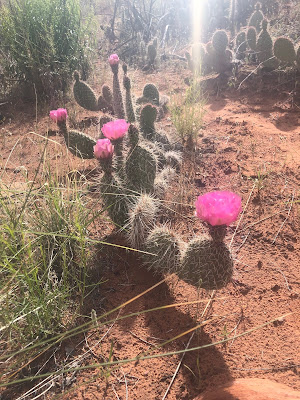 and there was plenty of petrified wood that showed that stuff bloomed a long time ago:
As we arrived at Coyote (and bumped into old friends Jake and Addy and their friends) it felt like our adventure had come to an end, but the Good Nature wasn't done with us yet.  Thunder and lightning in the morning was a bit unusual, and by the time we got to the sandstone slab that represented our exit from the gulch it was soaked, and an exposed traverse that is absolutely easy and totally forgettable when dry became pretty dang spicy with sand covered shoes on the wet sandstone.  After leaving our friends and another group behind there with a length of webbing for a fixed line we trudged up the long sand hill to the Crack in the Rock; the subtle and key spot that takes advantage of a fallen block to work your way up to the top of a cliff, where we in full exposure to pouring rain and a good stiff breeze.  We didn't need to see the snowline shockingly low on the flanks of the Kaiparowits Plateau to know that the temp was also quite low, and once again we found ourselves in full river clothing as Ash led the swift march back to the trailhead where the car awaited. But that wasn't quite the end of our adventure:  as desert travelers know, hard rains on clay roads makes for some greasy excitement. But Scott proved that not all GMC suburbans are only driven on pavement, and his masterful seesawing of the nearly-unresponsive steering wheel and insistence on carrying plenty of momentum delivered us safely to the paved highway 12.
Thanks to Alpacka for making such Escalante-worthy crafts: 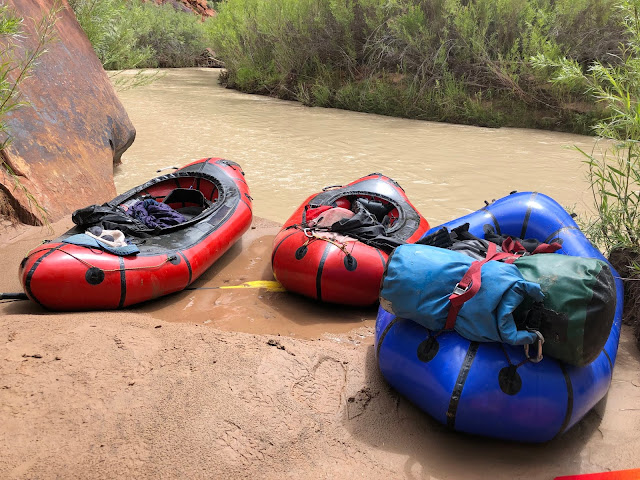 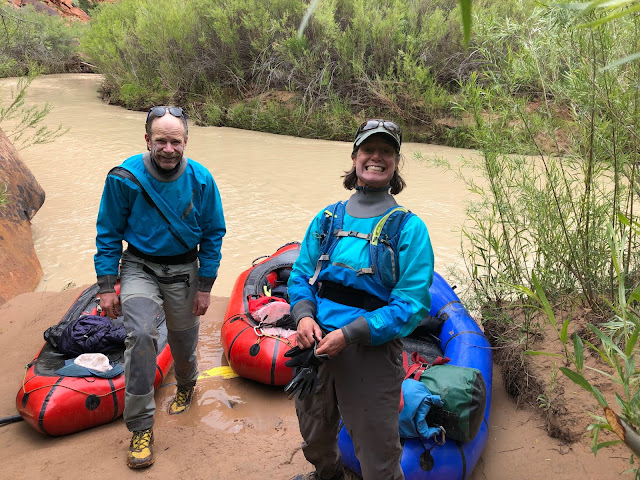 and Scott
for taking virtually all of these pics (I lost my camera in the Grand Canyon), and most importantly taking the time to join us for a week of ogles and yuks. 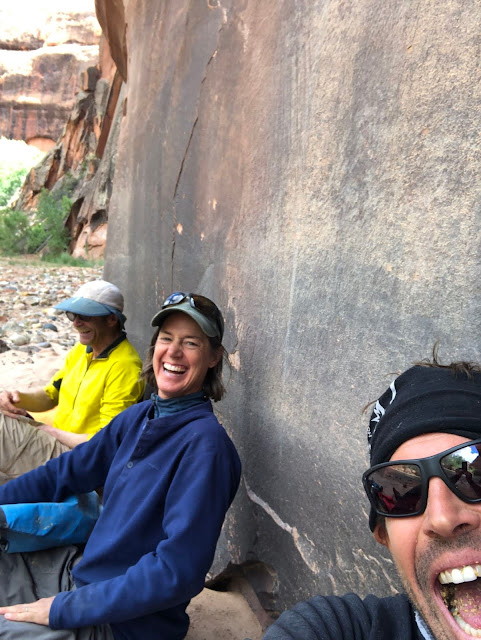