Final Ruminations on the Wasatch 100

Over the last month + as I've recovered from the Wasatch 100 and gotten back out on my bike and  - finally - running again, I've had a lot of people ask me the obvious question:  will you do it again?  And the answer is.....a definite maybe.  Or maybe not.....

Doing the hundy ("running" it seems like a bit of a misnomer) was hard; I anticipated some good sufferage, but it was actually a bit more than I anticipated.  I was hurting bad, but despite saying many times "I don't know if I can do this" I'd just chug out of an aid station and keep the wheels turning, and did so enough times to shuffle into the finish.  And though we fortunately don't have a very good memory of pain (a good - or bad? - survival strategy), I do remember pretty well being fairly miserable for many hours.  But if I don't do another hundred it won't be due to a dread of the sufferage, it will be more a function of the commitment to The Event.

I realized in the runup to Wasatch that I don't like tapering; I saw blog posts by people and updates from the race directors to the effect of "enjoy your taper!", as if being forced to do fewer long, fun, challenging, big outings were a good thing.  I find this ironic because the reason that we all get into this silliness is that we enjoy doing more of the long, fun, challenging, big outings.   I always revel in the ability to get out and get after it on a daily, weekly, or spontaneous basis, and being on a "program" that inhibits that ability  -especially shutting it down - is a bit of a crimp.  In fact, many times through August I was asked how my "training" was going, and I was always a bit uncomfortable with that term; even though I had this big Event looming out there, I didn't feel like I was "training", I was just gettin' out and given'er.  Which is probably why I've never - and never will be - the fastest of the fast; strong - yes.  Top notch?  Never have, never will. Because I've been too interested in doing fun stuff with fun people than doing intervals, being on a program, and "training" for an event.

That said, for many people, The Event and The Training for The Event is great; it's a somewhat fabricated, but socially-accepted goal that looms out there and provides incentive for people to get out and indeed, git 'er done.  That's why the New York Marathon - happening in 10 days - gets over 50 thousand participants!   But why does it take The Event to make people push themselves so hard?  I saw this photo: 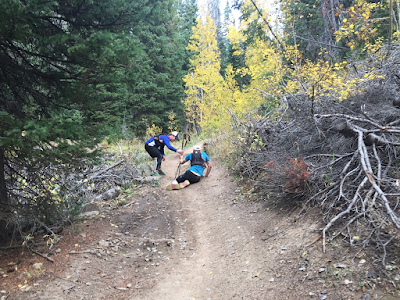 after the Bear 100 in Northern Utah and have been haunted by it:  the trail is pretty much flat and buffed, yet this guy is not only down, it appears that he's collapsed and it's debatable whether or not he's even able to get up, much less finish however many hours/miles he's got to go (he did not).   But because it's The Event - and there are expectations associated with The Event - we must persevere, and finish within the realm of the expectations that we have  - or others have - created for us.  For example, for the Wasatch 100 I said that I didn't have any real expectations, but that's not really true:  I kind of assumed I could do it in about 24 hours, partly because others I know who I feel are comparable to me have done it in that time, but also because 100 miles and 24 hours are nice round - yet still relatively arbitrary - numbers.  But I was slower than that.  And based on who they were, people's expectations of me and my finish were varied; many people have given me lots of kudos about how I "crushed it" and was 18th place! but the truth is that it was "the worst" placing I've had in any trail race relative to the field.  Was I disappointed?  Not really; I knew I was a bit undertrained and I knew that I'd suffer a lot and learn a lot, which is what I did.

But afterwards I read a couple of accounts by "contenders", who seemed remarkably pissy about the event; one guy thought he could win - in his first go at a hundy - and as he started to fade (and eventually finish 5th) he whined that it "wasn't worth finishing".  And the woman (Obsessive Runner Girl) who ultimately got 2nd apparently - by her own account - pretty much added Tantrum Girl to her moniker as it became clear in the later stages of the race that she wasn't going to win.  The 5th place guy caught some heat by a 30+ hour finisher who was resentful that fading to 5th place was not worthy, rightly pointing out that for many  -in fact, for the other 298 of the 303 who started the race  - 5th place would be great!  And ironically, these lofty expectations are being applied to a race that has notably lost its luster in the ultra world; none of the best national/international people do Wasatch any more due to bigger races nearby on the calendar, so anyone out to win is trying to be a large fish in a small pond.  To his credit, 5th place guy backed off his post quickly and apologized, but again, it's a function of expectations, and he wasn't fulfilling his own. Was that worthy of bitching about it and consider dropping out?  Apparently so, because we are endeavoring under the pretenses of Events, which encourage that type of behavior.

That said, lately some compadres have been doing some great outings that are not Events: a one-push effort to do all of Utah's 13'ers by the indomitable Jason Dorais and Tom Goth, a new big ridge linkup in Utah County by Noah Howell and Courtney Pace, and the Wasatch Ultimate Ridge Linkup (WURL) saw a lot of late summer action (by Chad Ambrose, a couple of ladies who did the fastest (only?) female time, and route pioneer Jared Campbell).  All going as fast as possible and inexplicably pushing physical limits, but doing so using naturally-occuring ranges/peaks/features to enable the routes and a possessing a simple desire to do The Thing (which is much different than The Event!).

But for many/most folks, having an agreed-upon Event is probably the best incentive/excuse to train yourself to truly go as fast/best you can; lots of people can stay generally fit by consistent exercise, but it's Events that make people push themselves into that last five, ten, or one percent of their ultimate potential.  And that can be pretty fulfilling.

So will I do it again?  I wouldn't say "I'm hooked" by any means, and not only am I leery of the commitment, the frustration of the taper   -and the recovery, which is not insignificant! - but also feeling self-conscious about asking others to commit their valuable time to your Event.....it's a lot.   But for the same reasons that I was intrigued by the concept of a new, big adventure that Wasatch represented, other Events - like the Hard Rock 100, which apparently is another level - represent new, big adventures (and now that I finished Wasatch I actually qualify to get into the Hard Rock lottery, where I'd have a 1.5% chance of getting in!, but I have to do it now, or I'll lose my ability to get into the ridiculous lottery, since there's a time limit on qualifying races! Yes, it's madness.....).

Or maybe I'll just do more silly Things in lieu of silly Events....
Posted by Tom Diegel at 10:48 PM No comments: