Descending the mighty Grand Canyon of the Amazon, the Rio Maranon, part two.....

Once we were on the river the grinding travel of the prior few days quickly faded into fuzzy memory, and life's focus shifted towards rapids, beaches, camps, hikes, and food, as all river trips do.

The first challenge was the appropriately-termed "Narrows", where the entire river flows through a constriction that is about an inch wider than a cataraft!  In a kayak it was a non-event; 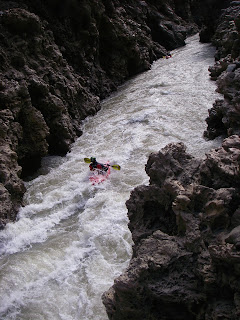 but for the rafts it was fairly interesting: 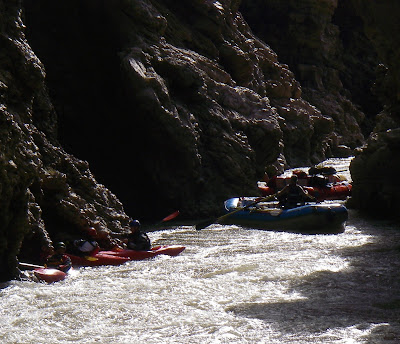 fortunately there is not a ton of current going through here; if there was things would be much different.

After running a bunch of rapids and a camping on a couple of sublime beaches, we came to a riverside farm where we did a layover day.  Rosemeil and his wife grew the requisite bananas, papayas, corn, and potatoes, and something else that doesn't grow very often in the US:  fighting cocks! 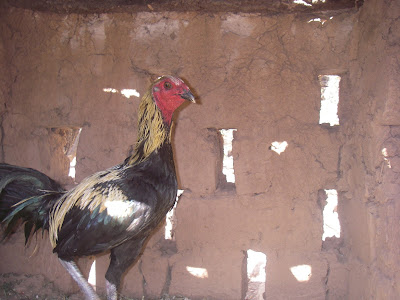 Rossmeil told us that there were some good ruins up the trail that led out of the canyon, and was willing to give us a tour:


Since Ash and I had the first chance to blow a bit of the carbon of the carbon that had built up in our lungs from a few days of inactivity, we charged up the trail for a couple more thousand feet, then returned for a nice dip in Rossmeil's stream: 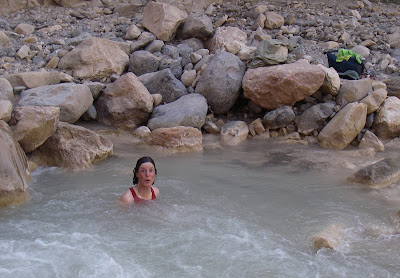 Behold the (clean!) Amazon Woman!
Back on the river, we found some more whitewater: 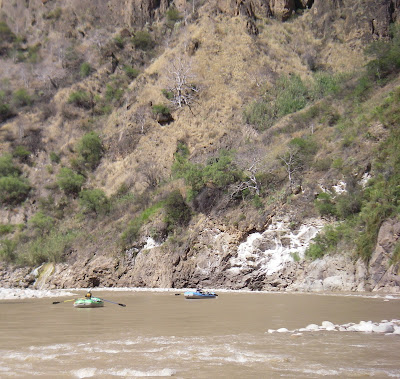 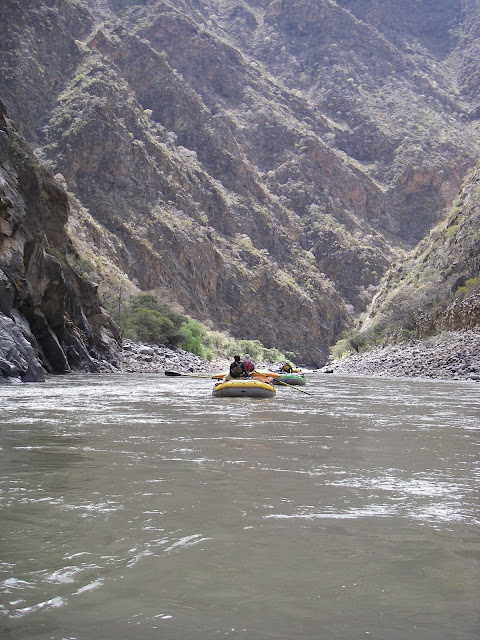 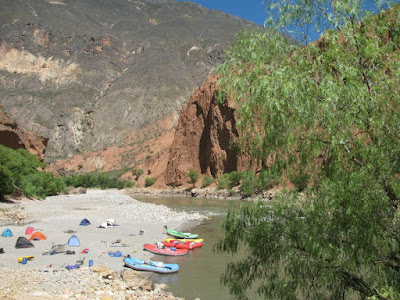 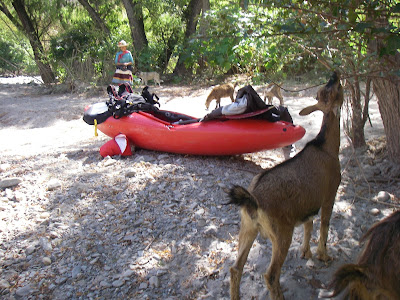 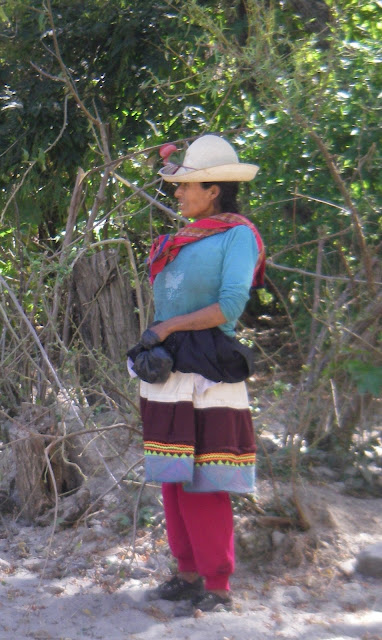 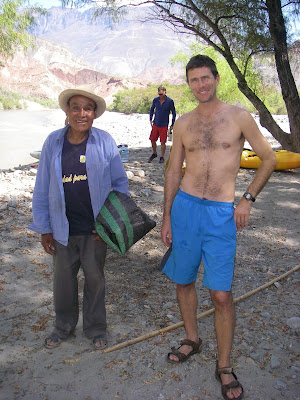 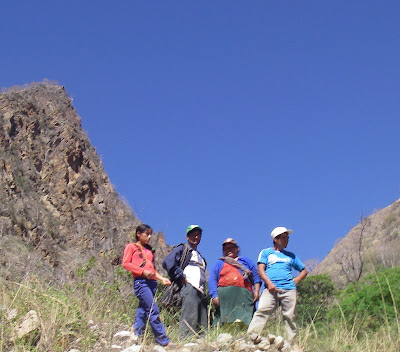 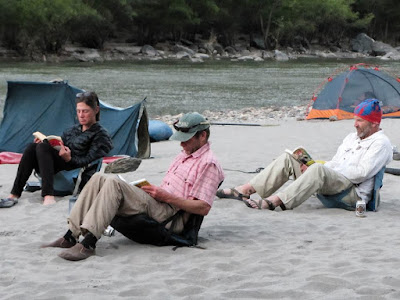 More ruins:
And a bunch of river dorks: 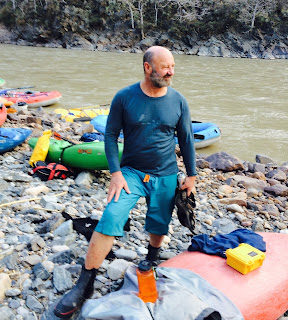 and speaking of turning 50.....when Andy turned 40 we were on the south fork of the Salmon in Idaho, and The Scotsman's lovely wife gave him the special present of letting Andy lick cake frosting off her nipples!  (and there's a backstory to that...).  Kathy couldn't make this trip, unfortunately, but The Scotsman  -being the good "mate" that he is, and wanting to keep a good thing going - obliged! 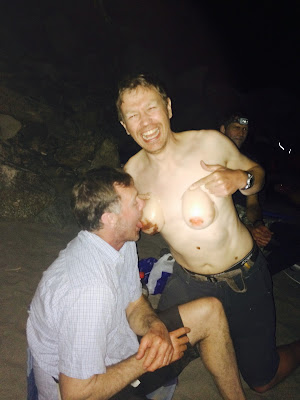 However, our riparian bliss had a big wake up call that was a pretty big buzzkill.  Deep in the heart of the Inner Gorge we came across these guys:
They are doing site analysis for one of twenty dams planned for the Rio Maranon.  Damming the biggest tributary to the biggest river in the world seems like the height of hubris, much less taking out a world class river trip that gringos would  -  and do - travel thousands of miles and spend thousands of dollars to do. 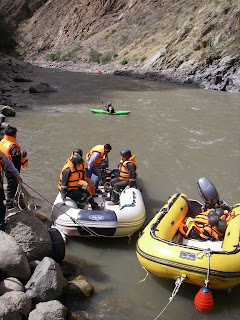 The power generated from this plant will likely be exported, and while the workers are Peruvian, the company is a multi-national.  A stark reminder that this river will likely be completely gone in coming years.

But what to do besides carry on downstream? 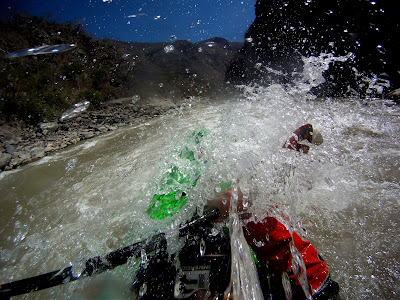 the next significant element to the trip was a rapid that Rocky has been calling Wasson's Landslide.  John Wasson was one of the early-ish intrepid kayakers (and longtime friend of Patagonia's; tho it was confusing because there was another John Wasson who was an employee of Patagonia as well) who did one of the first gringo descents of the Maranon and was the only one to write much about that trip, so Rocky gave the rapid his name.  All of the rapids on the Rio Maranon were formed by side creeks that had flooded debris into the river (similar to those of the Colorado in the Grand Canyon; most famously Crystal Rapid that formed after a huge rain event in upper Crystal Creek in the mid-60's), but Wasson's was formed by a big landslide that threw a lot of house-sized rocks in the river (and is similar to some of the huge portages that Rocky and I had high upstream).  It's a pretty stompin' rapid that is not only quite long (about 700m) but also has The Sieve Rock where a good bit of the river flow piles into a huge rock and only a little of it goes around the rock; the rest goes under it and re-emerges in huge boils downstream.  Impressive.  Much of it was runnable in a kayak, and if it were roadside it would likely be fully raftable by bold folks, but for us it was a daylong effort of lining the rafts or very carefully running them with plenty of safety in place.

Even though we had a torn tube during one of the lining episodes and no shortage of tense moments, we made it through in the day (there have been several uncomfortable bivouacs in the boulders in the middle of the portage) and were able to run some of the fun class 4 rapids below.  Mike was kind enough to lend me the oars for this section, and given my relative lack of experience at the oars in this kind of water I was on the edge of my seat!
It was a pretty tiring day 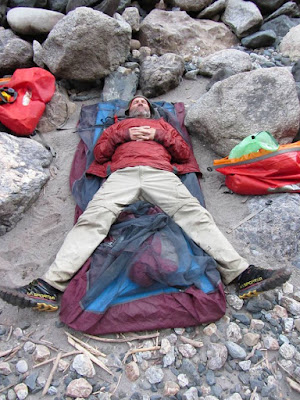 That ended in an unlikely-looking - but surprisingly comfortable - camp: 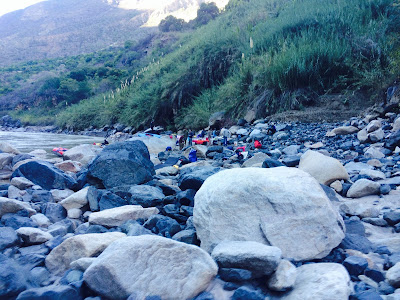 The next day was the 2nd biggest rapid of the trip, and it provided some good excitement:
Once through that we had plenty more good whitewater:

Though not many people float the Maranon, there are plenty of communities upstream, and unlike some of the Western US river, there's a fair bit of trash that gets caught in bushes during the rainy season floods.  To clean it all up would be overwhelming, but we targeted a couple of beaches to get them pretty clean so that Rocky can see if it's worth doing again in the future.


And the trip neared the end.  There's enough "end" that it's worth another quick blawg post and this has been quite long enough, so I'll do a part III soon.....
Posted by Tom Diegel at 5:03 PM No comments: