Once we had done the descent of Arrigetch Creek, there were plenty more adventures looming. But first we took advantage of a few hours of sun to get the "critical drying" in. 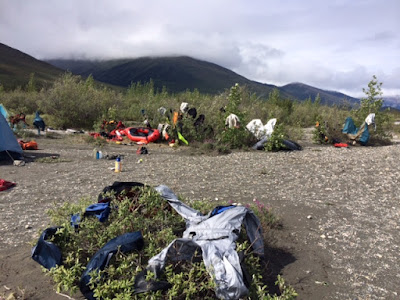 We wanted to check out South Arrigetch creek, which was the next major drainage to the north, and this creek apparently had a section that Roman Dial called "little California".  Since we love paddling in California, we had of course had to check this one out.  The first order of business, however, was to do a solid vertical K of climbing out of camp to assume the ridge between the peaks.


Usually a scramble up a 3000 foot peak takes an hour, but with the packs and the bushwacking, it took us more than an hour!  But the views on top were worthy:
Since we were above tree (bushwack) line, we were able to move quite a bit faster, and quickly got closer to the Maidens 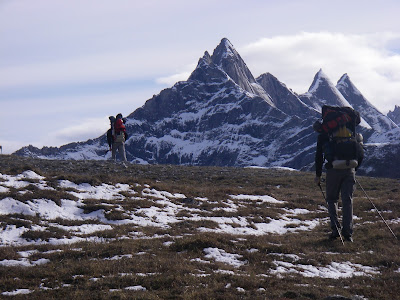 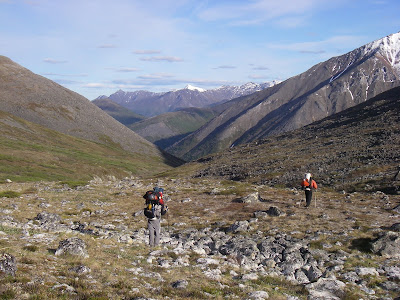 But as we grew accustomed to saying, Alaska doesn't give itself up easily, and we ended up plunging down a ferocious alder thicket next to a waterfall 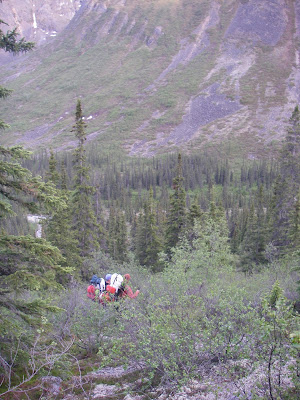 But finally found a nice camp
While the creek looked great, we decided to do a day hike up the drainage to get into the meat of the mountains again, kind of the south side of the Arrigetch.  and we were not disappointed: 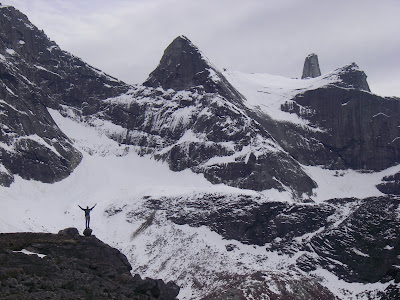 Then the rio called.  We put on in some opaline water that was a little bony again to start 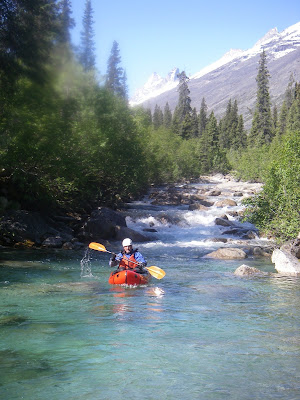 but eventually picked up and a 200+ foot mi with a bunch of class 4+ rapids gave us some good excitement. 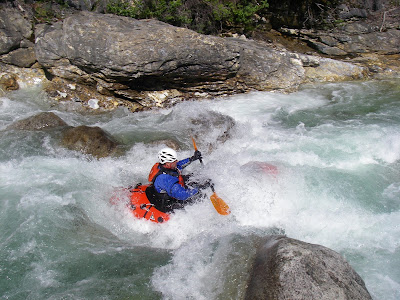 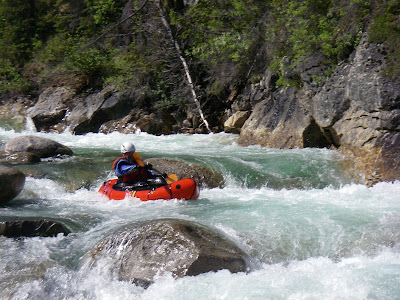 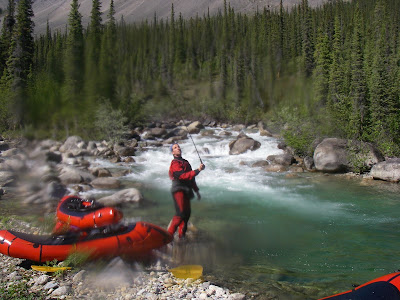 and was successful in slaying some Greyling Hawgs: 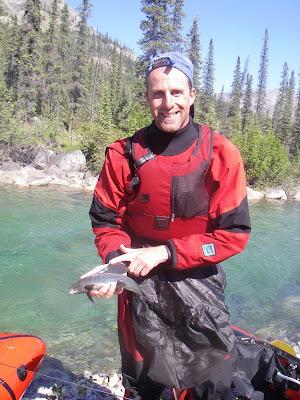 In fact, everyone got one....except me!  Not sure what it is about me and fishing.....But I was glad these guys caught them, because they were meaty and tasty 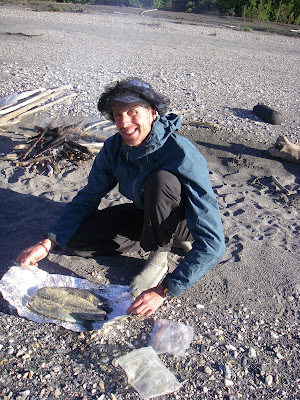 After the class 4 section the river backed off to a class 2-3 doodle, until it started braiding dramatically in the Alatna floodplain: 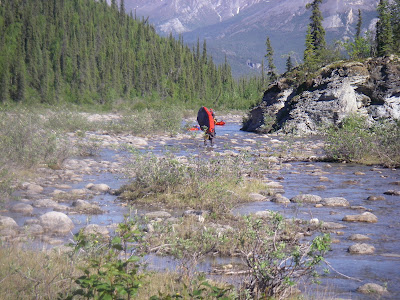 and eventually we found ourselves at another great sandbar camp.  Again, our stellar bear management ensured that put our tent right on their trail:
The trajectory of South Arrigetch creek put us 10 miles down the Alatna river from our camp, so we needed to get back upstream.  From the air as we flew in it looked "fine", but on the ground....it was a thrash fest.  It took us 10 hours to go 8 miles.

I had no idea that beavers could manipulate the flow of such big rivers, but little dams like this in the right channel had flooded acres of terrain that we had to stumble through 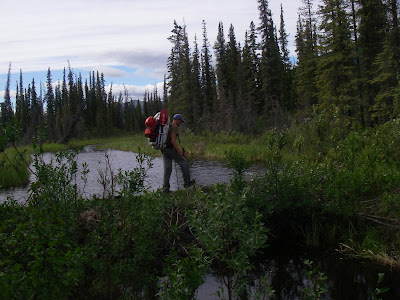 Fully bonked after running out of food on our last push into base camp (I've never worked so hard in flat terrain in my life) we finally made it back into camp, where all we wanted to do was flop down and chill.  But again, Alaska doesn't give itself up easy
At this point we had enough time for another 3 day adventure, so we decided to give our original objective another go and head back up into the heart of the Arrigetch, where we hoped to summit Ariel peak and descend the back side into the Awlinyak river.  So back up Arrigetch creek we went, this time with perfect weather 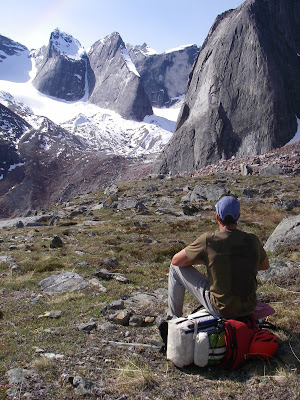 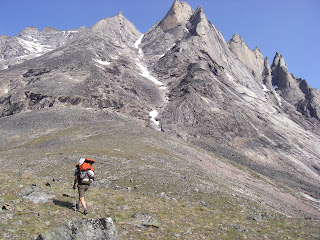 But there was lingering snow that we had to climb 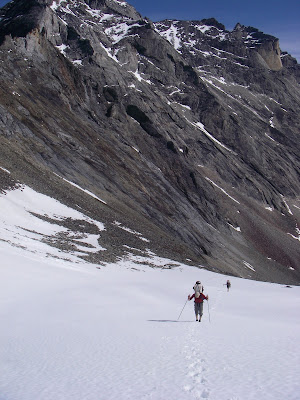 Once on the ridge the summit move looked a little spicy 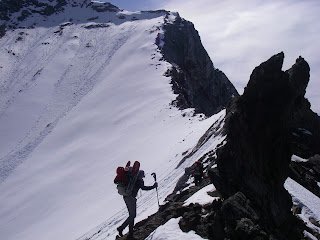 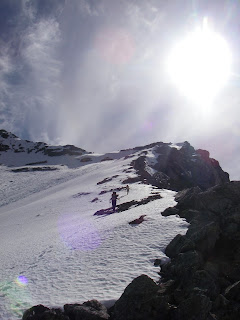 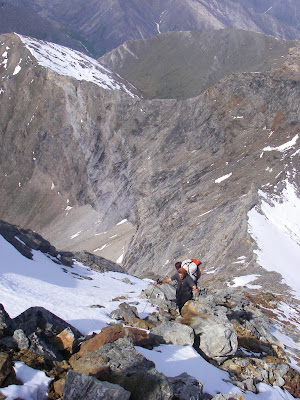 The summit was pretty ridonculous! 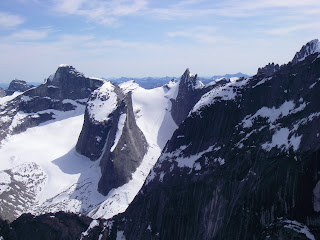 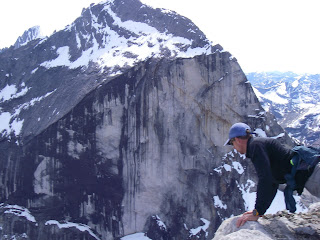 and then began a 5000 foot descent down to the river. 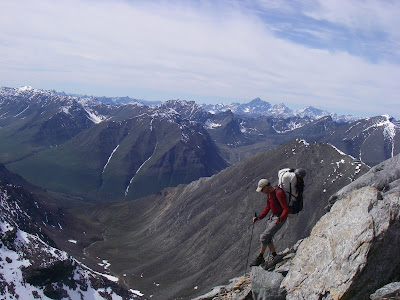 and as ever, Alaska doesn't give it up easy.  In the last 1000 feet that creek entered a class 10 gorge, so we had to struggle back up, traverse, then back into our old friends, the alders: 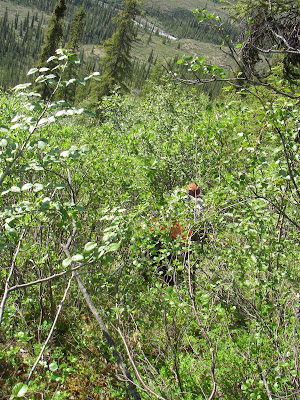 But we finally made it to the river, and there was (at least a little?) rejoicing 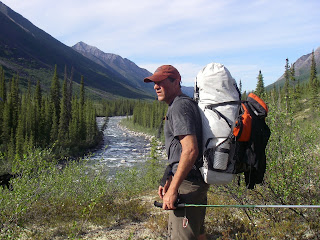 Sometime after dinner we were hanging out down by the creek - where it was cooler; the temps had soared by now - and we finally went back up to get ready for bed, when suddenly Greg said: "Grizz!" and sho nuff there was a bear ambling towards us heading to get a drink.  We were scrambling more for the spray than the camera, so no pics, but he sorta looked like this: 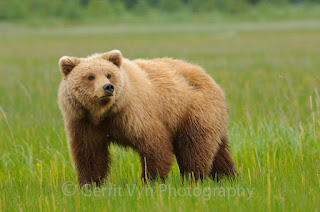 But when he saw and heard us he turned and ran away  -as people always say about bears -surprisingly fast.  Phil and Mike were both wondering if maybe he might be rethinking his move, however; it's been a long winter and the berries were still a ways out, and even stringy, 2-week-stink human flesh sounds better than grubs?  so just in case we put up our own makeshift bear "fence":
And finally we were back on the rio, that was fun splashy class 2-3 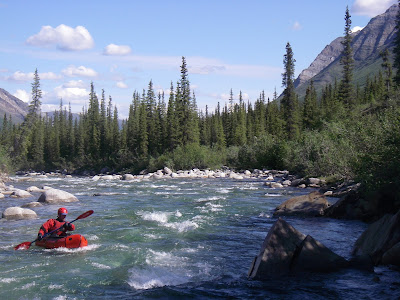 And thus our little adventure was over. The pilot was a few hours later than we anticipated, but fortunately our KISS cards kept us entertained: 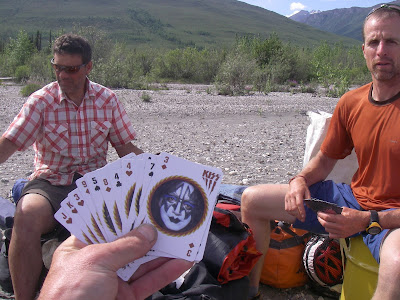 Until Dirk bounced in and scooped us up. 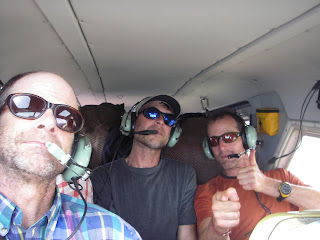 On the way home we had been referred to find this place just north of the Yukon, and we could all safely say it was The Best Burger Ever, served up by a couple of hilarious proprietresses. 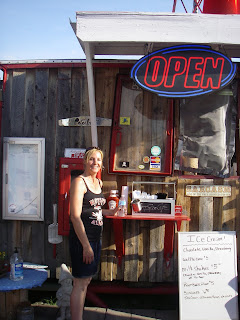 They also had a fine example of an original kayak:
There were definitely times on this trip when I thought "wow, I am not sure that I am up for all that AK dishes out, between the bugs, the weather, the bushwacking, the Grizz factor, and the remoteness" that clearly tweaked us a little in total: 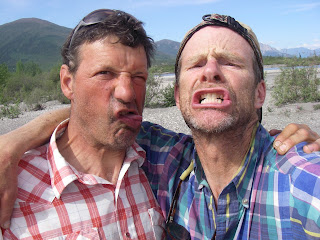 but none of those were bad and we had an incredible adventure with nearly perfect conditions.  Many thanks to Phil, Greg, and Mike for being solid pards and to Greg for spearheading the trip.

Next up:  the Rio Maranon in Peru!
Posted by Tom Diegel at 1:08 AM No comments: