Another April, and another annual soiree by the New Hampshire Canyoneering Team to the grovely slots of the Utah desert was a wild success!

The week had the potential for a challenging start, with the team experiencing not only a cancelled flight from Phoenix to SLC but their luggage opportunistically seized a different flight to SLC.  The Team - understandably anxious - pressed the US Airways "customer service" folks for actual service, were at one point told "look, we got you to Phoenix, which is MOST of the way to Salt Lake!"  The team had the good point that perhaps they should have paid only "most" of their fare!  But as it turned out, one of the newest members of the team (the hilarious Chris Hanlon, recently liberated from some godforsaken town in Illinois) did happen to be in Phoenix and was able to transport the team upstate to Utah, and the SLC contingent (me) was able to grab the luggage at the SLC airport (a weird scene; a full carousel of lonely luggage with NO customers!), a rental SUV to transport said luggage, and a plan to blast in said SUV down to the dez to meet The Team.  I stalled a bit in SLC until I realized that I had not only The Team's camping gear but also their warm clothes, and if they arrived at our campsite late at night before me the Team might get grumpy (if they ever did, which they don't).  So off I went.

The Team also had another couple of rookies coming in from Ketchum: the effervescent Paul Yelda ("Smiley") and Dani. While I hadn't met them, I got a text from them that they were in a grey Toyota Tundra, and sure enough at 10pm at The Campsite there was a grey Tundra as I bounced into the site. I leapt out with a hearty "Hullo!" and rushed up to introduce myself, but the couple there sorta backed away from my onslaught and sort of defensively asked "Can we help you?" Uh, is there a different grey Tundra, and are you not Paul and Dani?  Guess not, sorry, and prepare to be invaded a couple more times tonight!   And indeed it came to pass.  But by midnight The Team was finally all together and the fans sighed in relief; let the games begin!

North Wash is the unofficial epicenter for Utah canyoneering, as it's locale (30 miles south of Hanksville, just south of the Y intersection for Hite and Bullfrog) puts it in a convenient spot for getting after it in dozens of great nearby canyons.  and get after it we did, with great grovels down the south fork of Maidenwater, Tracheotomy, and the very tight classics Shenanigans and East fork Leprechaun.  We then moved south to one of our favorite areas, Ticaboo Mesa.  This mesa - northeast of Bullfrog - is pretty nondescript, until you get to any edge, where it spills off into oceans of slickrock punctuated by awesome slots.  It's as close to a roaded wilderness as I know; in 4 trips there of 3-4 days each we haven't seen another soul!  The road-end above the Dante Canyons is well known to at least Brother Paul and I as The Best Campsite in The World, and it's home to the classic Good Day Jim and Hard Day Harvey canyons.  This trip The Team focused its energies on the fun canyons of Smith Fork, that includes the tight "Wormhole" slot (that has a moderately-scary "silo" section that has the potential to be doing a too-wide stem way high), Pothoez (with a challenging pothole escape), and a couple of others, including Psycho D, described as one of the most challenging canyons on the Colorado Plateau, which is saying a lot (we didn't give it a go).  The Smith Fork canyon itself is as beautiful a hike-through as any canyon anywhere and a worthy outing unto itself.

Here are a few pics of the Ticaboo area.

We then moved north to Capitol Reef, where we finally confronted the major cold front that was pounding the Wasatch with 3 feet of snow.  but after a chilly morning breakfast: 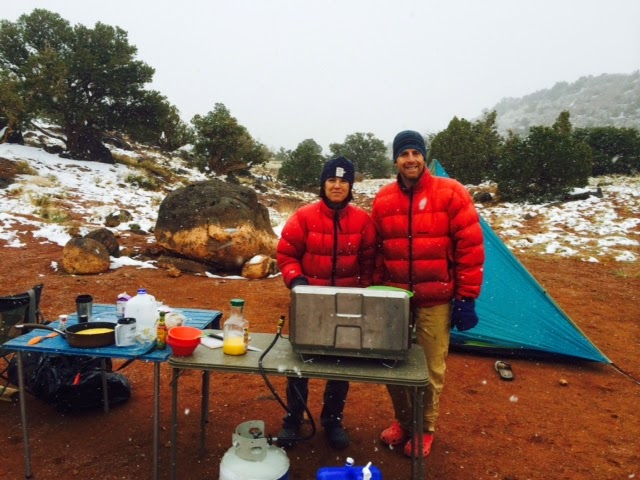 things warmed up enough to dive into another fun slot right in the heart of the Park.
Our Ketchum friends had to move on, so the remaining members of the team hit up a fun short canyon on the way home, between Goblin Valley and I-70.  Despite the chilly temps, it was sunny enough to dive into a wet canyon
And another year of slot-grovelfesting was done.  Many thanks to new Team Members Chris Hanlon, Smiley, and Dani for keeping me laughing the whole time, and of course to the core of the New Hampshire Canyoneering Team:

Posted by Tom Diegel at 5:04 PM No comments: 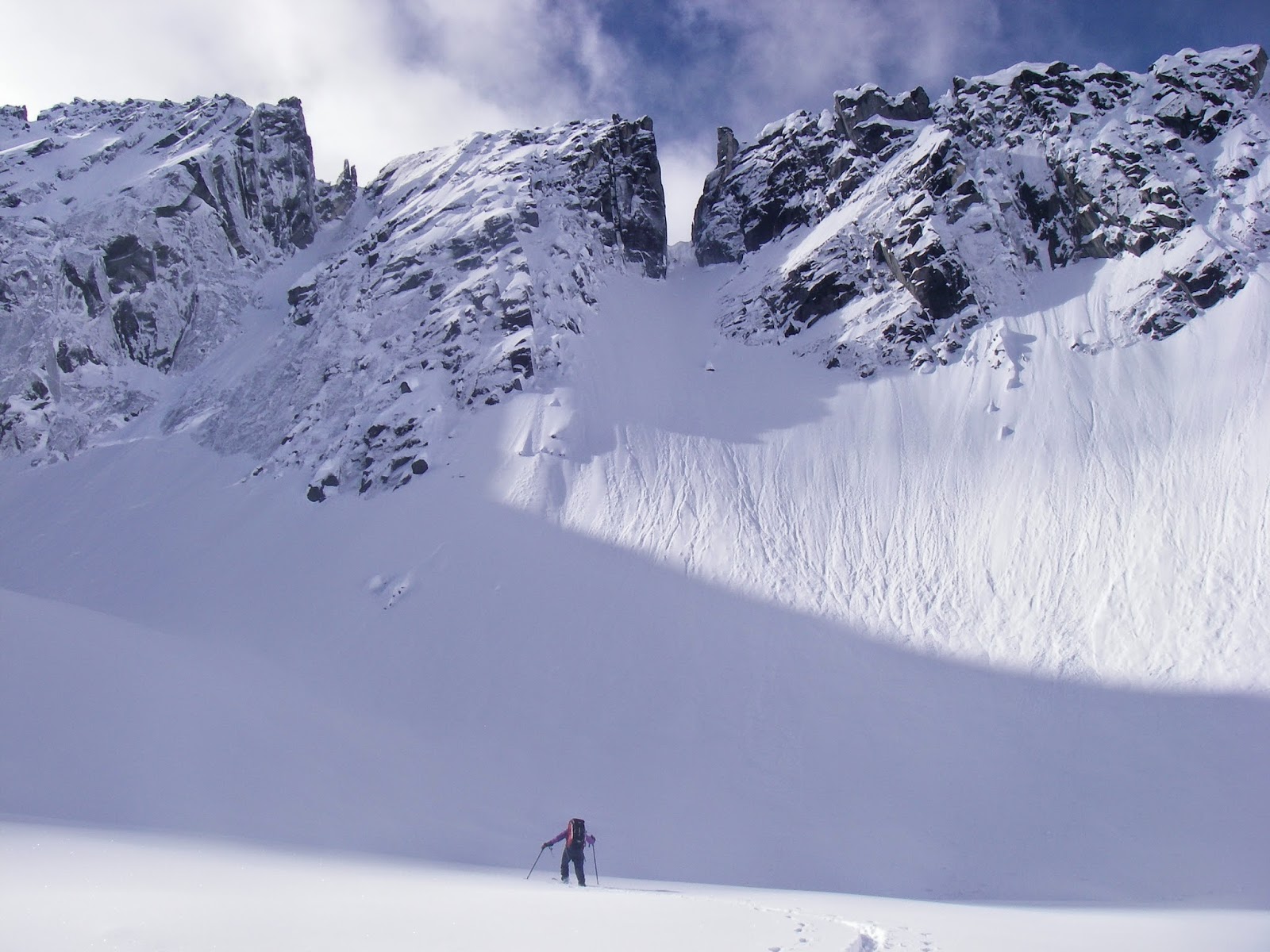 I have been back from our trip to the legendary Fairy Meadows hut near Golden BC for almost 2 weeks, but haven't taken the time to do a post about it yet because...I dunno, I've been bizzyboy or something with work and some high quality socializing. But it was a great trip worth writing a bit about and sharing a few pics.

Ash and I had both been to Fairy Meadows long ago on separate trips; they were both earlier in the season and were challenging: she had lean snow conditions  - meaning the crevasses yawned open ominously - and the trip I went on had bitterly cold temps with the warmest readings all week around zero degrees F, so travel options were a bit limited.  So despite saying that we were going to take a hiatus from a ski trip this year, when the mighty Elliot Barcikowski invited us on a late season week (which is the hardest time to get) at Fairy Meadows the prospect of having warmer temps, a more-robust and hopefully stable snowpack made us ponder the concept for about 2 minutes before we jumped on it.  And we are glad we did!

BC had a strong start to the season, with the ruschblock or whatever they were calling the interminable high pressure ridge that plagued the Western US forcing all the good snow to our north for Dec, Jan, and much of February, so the 'pack was phat up there.  However, in late Feb and early March they got hit by the warmth and variability that we had, and the stability suffered, and the week before we went there was the ominous news that a super-experienced and well-loved guide was killed in a freakish avalanche (here's the link to a comprehensive story about it) not far away the week before we went.  But as always, off we go, telling ourselves that we'll be safe.....

Fairy Meadows requires a pretty long flight in, and our flight day had a fair bit of snow, fog, rain (in town) and wind, as we waited for a possible break in the weather a heli-ski crew took off to head to their lodge only to return to base.  Much ski porn was watched, much scrabble played, etc. and we were pretty certain that we would be flying the next morning, but suddenly things lit up, some of our crew was whisked into the copter and off they went. As it turns out, the crew that was in the hut had conveniently turned off their radios and were out skiing, in the sauna, and making dinner when the heli came in, so apparently they got into a bit of a flurry to exit the hut in a hurry.

It was a bit touch and go due to the late hour, but the last of our crew, food, and gear arrived just before dark and we quickly settled in.

After a solid session of eye-opening rescue practice in the morn we headed up into the hills above the hut where I found a good 38 degree, hundred-vertical foot test slope and  -on belay - jumped out on it to see what would happen.  One stomp got this great shooting crack: 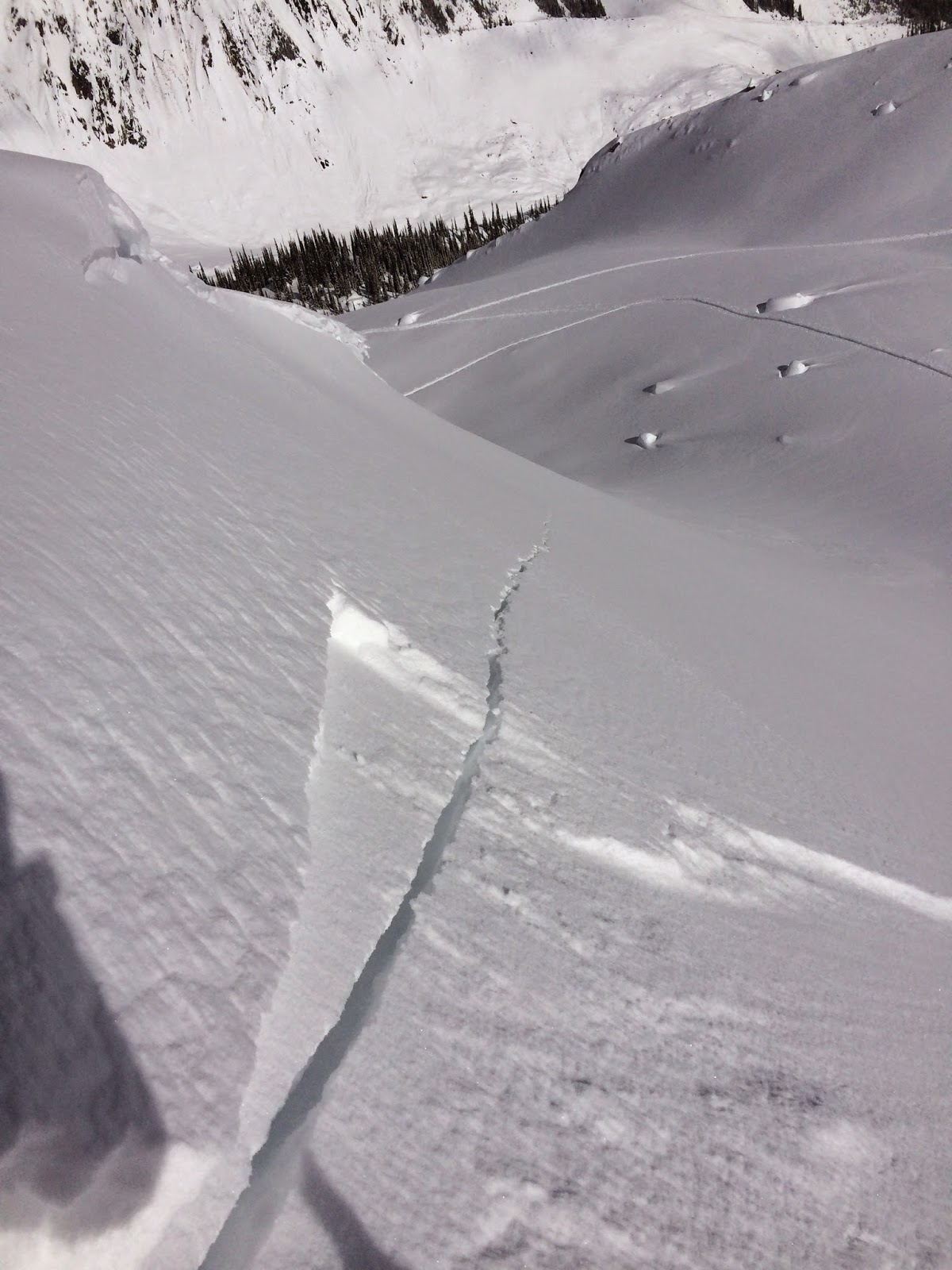 and the second got a nice 18' crown to break and race down the hill. 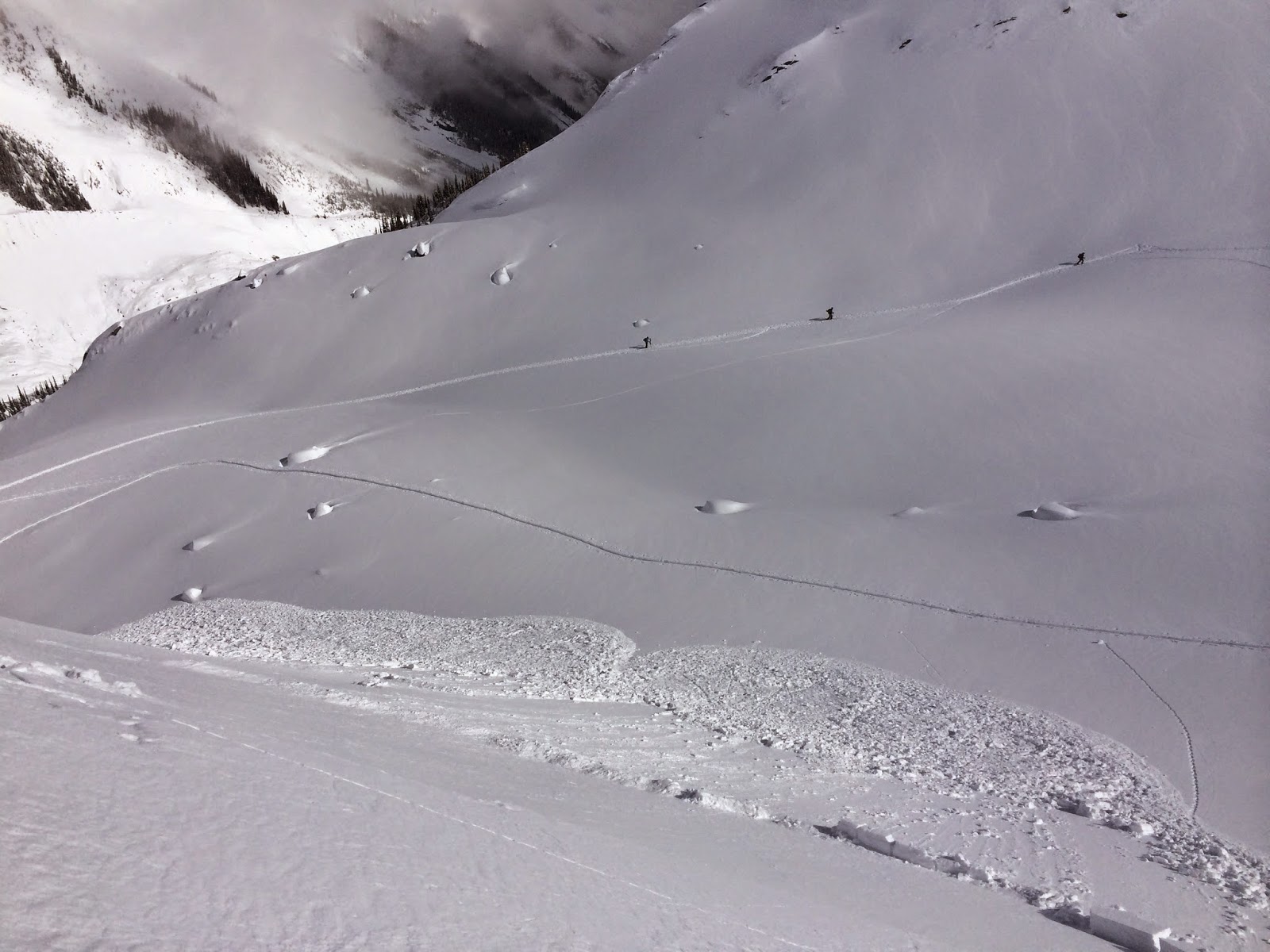 A bit of an ominous start to the trip, but as it turned out, that was the only avy activity we had all week.

Beyond that, it was essentially BC hut trip standard fare:  wake up, feast on breakfast, have the usual "who's going where" cluster, everyone leaves, march about and ski some great lines, come back and drink, eat, play games (except for Elliot!) hit the rack, and repeat the next day.  Here are a slew of pics: 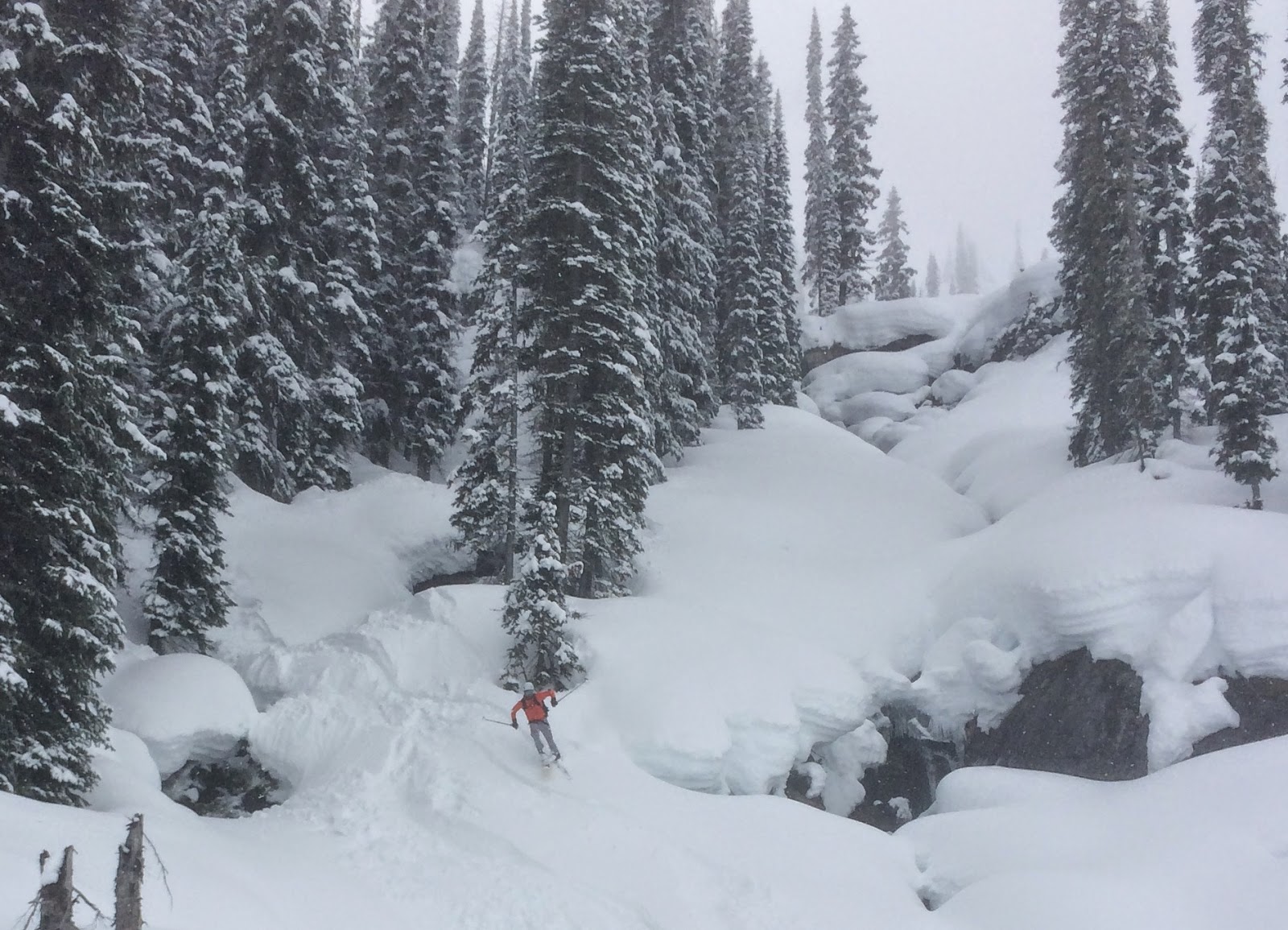 I decided to shoot the tube.... 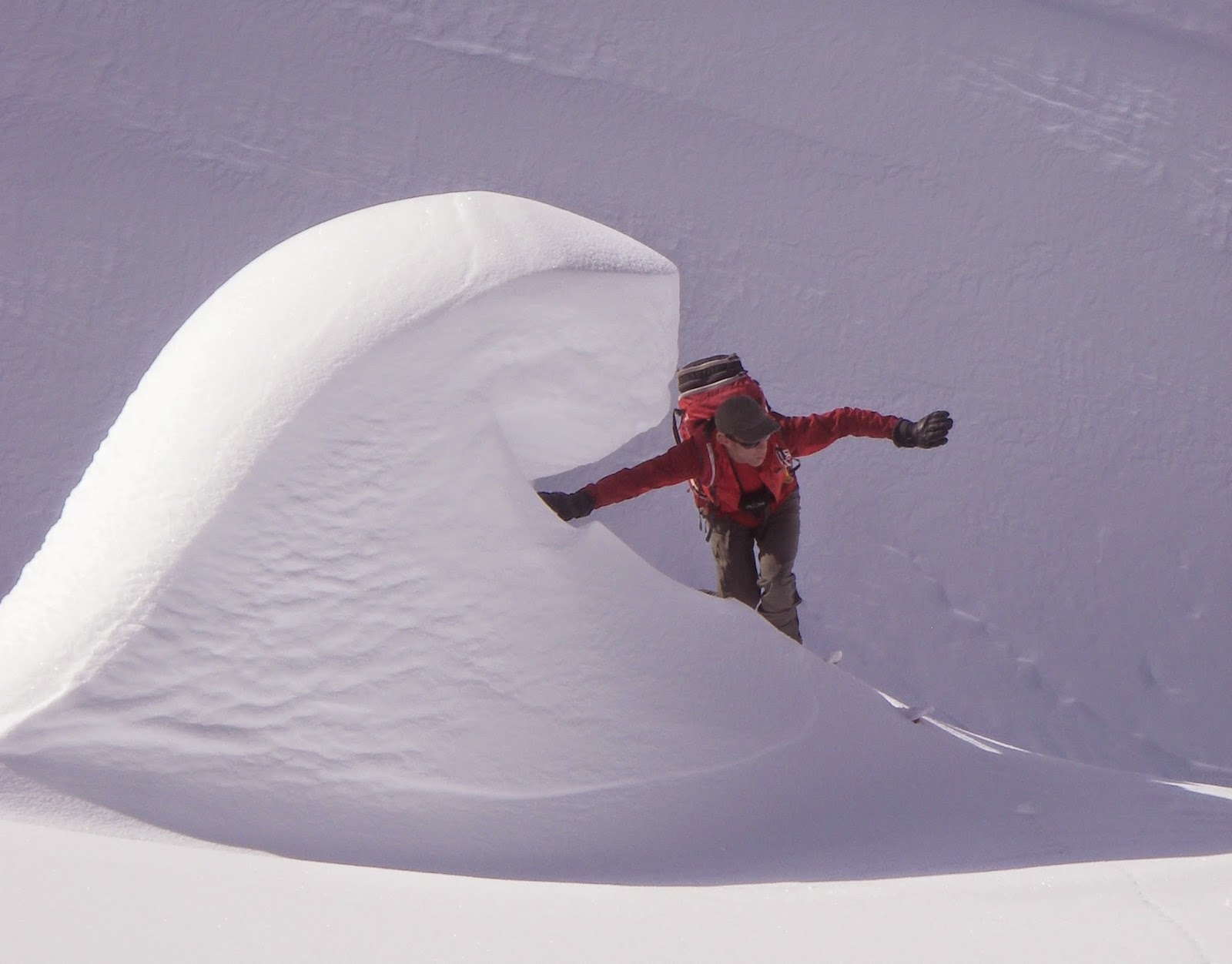 And our weather improved again so we could go up high....


No trip is complete without the gratuitous hut kicker fest, so I invoked some long lost gags from the bag: 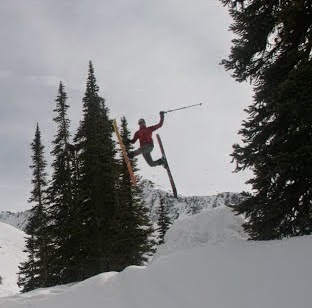 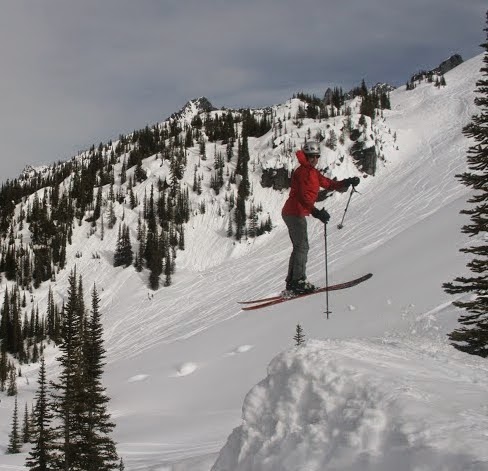 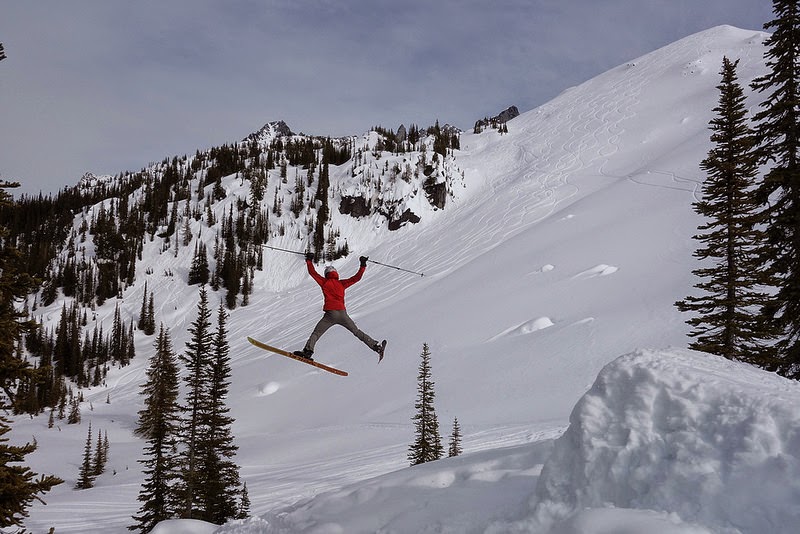 And while we waited for the heli to whisk us back to cilivization, Austin (who had never toured before, yet slayed it!) took advantage of the deep-snowpack trench to gap huck.... 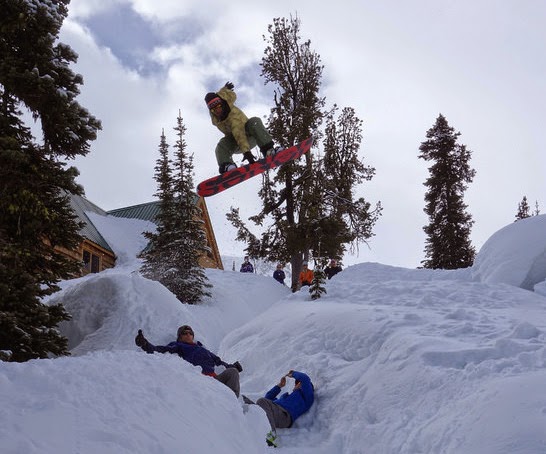 and thus we were done.  Fairy Meadows isn't the most skiable hut we've been to, but the infamous craggy terrain is pretty ridonculous.

Then back to the humdrum Wasatch... 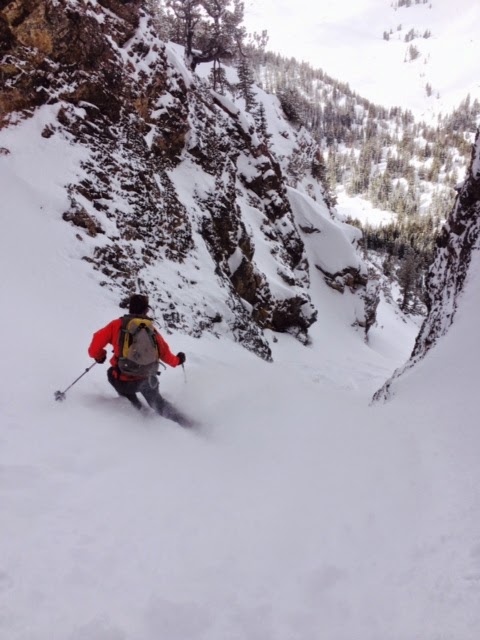 Our fellow hutmates  -from the Northwest - turned out to be stellar photographers, and for mo bettah scenic shots of the area here are a couple of links to their sites to get a better sense of the terrain and see pics of people you don't know.

Thanks again to Elliot for having the foresight - and luck - to get the hut late season (and in a challenging Wasatch season!), organizing the trip, putting together a great crew, and inviting us!