A Return to the River of Return

Four years ago Tom Macfarlane invited me on my first ever pack raft trip:  The River of Return.  I was sort of a pack raft gumby at the time; I borrowed an old-school tubby boat that required a bow-mounted pack, had an awful leaky skirt, and for a pack I used a river bag with shoulder straps as a pack, which was woefully uncomfortable since it was designed to haul up a beach, not 45 tough miles, but at least the rubber bag turned my back into a sweat-fest.  But the journey itself was amazing, and when the New Hampshire Pack Rafting Team wanted to do it and brother Paul was keen as well I was quite happy to make my Return. 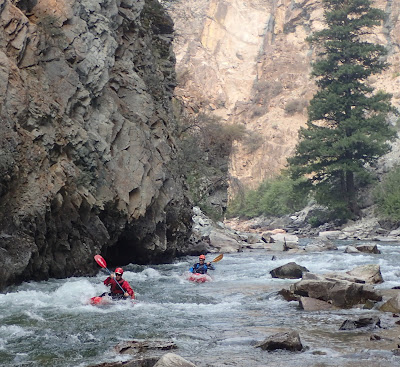 The River of Return is so named because it starts on the Salmon River, which has the oddly-romantic, but still-inexplicable nickname of the River of No Return, but when the venerable Forrest McCarthy pored over maps and realized that a great weeklong loop can be made using the Main Salmon, Big Creek, and the Middle Fork of the Salmon back to your start point, well, there was only one natural name for this trip.

Our trip started in the spring, when we decided that we wanted to do this trip but we hadn't had the foresight to apply for a Main Salmon permit during the signup window in January.  Historically it's been pretty easy to get cancelled permits once the season gets going, but the Forest Service changed their system so that when a permit was cancelled the first person to nab it online was the taker.  However, some way-uncool person figured out how to create an online "bot" that was constantly monitoring the site and would instantly grab any cancellation that came up, and apparently this person was attempting to sell a subscription to this "service" to his fellow river runners.  The Forest Service got wind of this and changed their system, and I heard that the 'bot creator is still recirculating in some awful ledge hole on his way to Hell.  However, the new system was suspect as well; they would post a cancellation one day and the permit would come open on a first come, first serve basis at exactly 9am the next day.  Our small crew then began to rally to go for these permits, and with an atomic clock at the ready the instant 9:00:00 turned over we "applied".....and they were gone.  I was convinced that it was again being 'botted (is that a word?) or the system was otherwise somehow rigged, and we should just poach it, but about the time Paul pointed out that sounded a lot like our petulant President he sent out a text at 9:01 saying "Got one!"  I love the new system.  It's incredible. The best ever.  Believe me.

And thus we found ourselves at Cache Bar on the Main Salmon, which is the takeout for the Middle Fork that comes in a few miles upstream.

And thus we found ourselves at Cache Bar on the Main Salmon, which is the takeout for the Middle Fork that comes in a few miles upstream, where the commercial guides with the big sweep boats and their many huge rafts tried to push we lowly pack rafters around as we geared up ("Just to let you know.....we NEED this picnic table, and our bus NEEDS to turn around right where you are!"; I didn't really tolerate this hubris and told them so).  Since our first couple of days were on the water we loaded up the inside of our boats with heavier food and (for Paul and I) some beers (as per river trip protocol).  Due to the copious snowpack of this winter the Salmon still had plenty of water in it ($>9k at Whitebird, and the Middle Fork was still 2.7 feet) so soon enough we were merrily bobbing down the river....soon to return!

A few miles down we arrived at the Corn Creek launch site, which is where the ranger station is, and the very nice ranger checked us out:  fire pan for the fires we won't create, pfds we hope not to use, shit containers that we need to carry in our boats...and on our backs?  She also admonished us to drink only water from the side streams (the Salmon runs through a few towns and lots of rangeland) and of course to purify it.  Being the contrarian I am I asked why purify (thinking of my earlier blawg post regarding water) and she of course said "to protect against giardia"  - which I knew she would, so I pounced, somewhat dickishly (but I really wanted to hear what she had to say):  "Really?  Has it been proven that giardia is prevalent in these parts?"  And she admitted that it was not and really she didn't know but that was one of the things that she was required to say.  Fair enough.

We floated down the Salmon for 2.5 days (covering 55 miles; most of the "best" of the Salmon) at a pretty leisurely pace, bobbing through plenty of fluffy class 3 rapids: 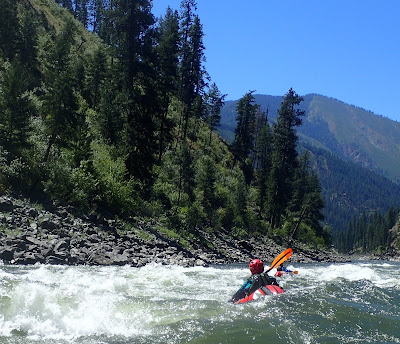 and moving a lot more easily than Tom and I had on the anemic flows of a few years ago.  The biggest rapid, Black Rock Falls (upstream of the former Salmon Falls) gave us a little excitement (and put those "personal floating devices" to a bit of a test) but quick midstream self-rescues in the really-warm river kept the tension down.

This caused us a bit of consternation:
At Mackay Bar - one of the Salmon's many mini-civilized outposts - we rolled up our boats, shouldered our packs, and hiked a couple of miles up the South Fork to the footbridge across the river, a nice campsite, and the foot of the unmarked trail that leads up to the Horse Heaven ridge that looms 5000 feet up.  We had designs to hike up the South Fork a ways that afternoon and paddle down, but the searing heat at that low elevation encouraged us to find other activities:
The next morning we got up as early as we felt we could on a leisurely vacation to start the long, hot grind up to the ridge.

With the boats and associated boating accoutrements on our backs and 5+ days-worth of food it wasn't a swift journey, but plenty of rests: 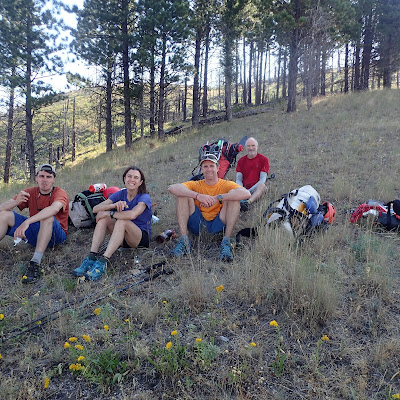 and solid marching we made it not only up the ridge but a few miles along it to Chicken Peak:
Where the crux of the entire journey is: a nice ridgetop spring on an otherwise long, dry ridgeline.
There was more blowdown than Tom and I had a few years ago: 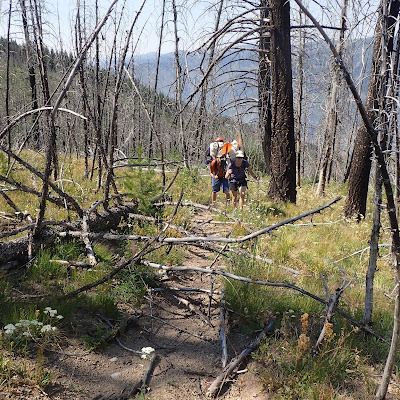 and it generated our only minor casualty of the trip:
But Sue was - as ever - a stoic trooper (who insisted it didn't hurt): 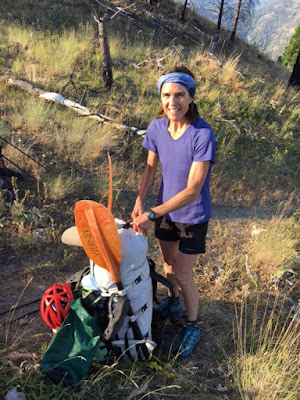 and we pressed onward. 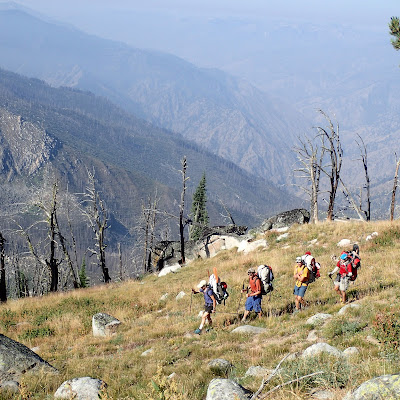 When Forrest McCarthy first did this trip with an all star cast of pack rafters (if that's not an oxymoron) they dropped off Chicken Peak down a trail that on a map looked fine, but their account was that it was pretty hellish; burned timber in a blowdown that created an entire forest of God's Matchsticks.  Tom and I had heeded their advice and moved farther along the ridge and dropped down another drainage, and that worked out well, but even at that, there have clearly been some wind events in the last few years that made sections of that challenging: 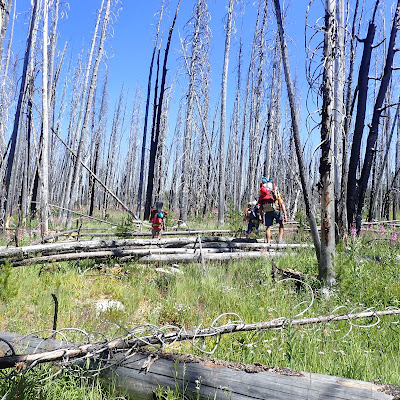 and even the camp at Beaver Creek  -that was indicated on the USGS topo map - was blown in: 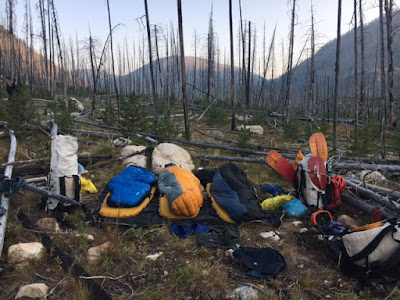 We took 2.5 days to hike down to Big Creek, and we were happy to see plenty of water where we met the creek (there was not enough in Big Creek 4 years ago, so we had to hike down to the equally-sized Monumental Creek for enough water) and thus unpacked the boats, grateful to get the weight back off our shoulders and start floating again.
At our camp at the confluence of Monumental and Big Creeks I woke up hearing "Bear!" and sure enough, there was a medium sized blackie across the river from us, coming down for a morning drink.  Sue wasn't sure if she should actually wake me up for it, since she thought I might freak out from PTSD post-Arctic adventure!

Big Creek is mostly a very mellow float for about 20+ miles:

down to the final 4 mile long canyon, where the gradient picks up a lot and makes for  -as Greg called it - "World Class Pack Rafting", with pretty continuous fun class 3 water. 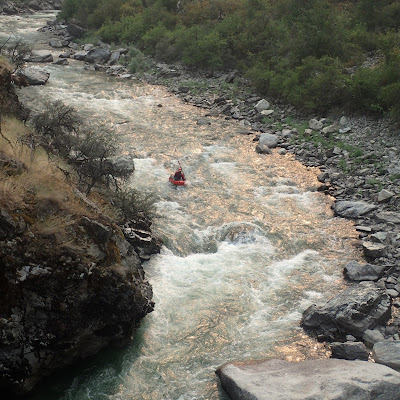 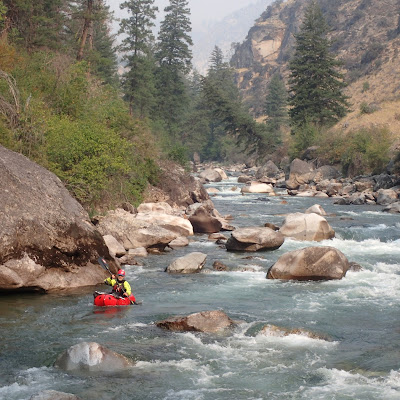 At our camp at the head of the last gorge we met Ryan and Heather, who are big through hikers: 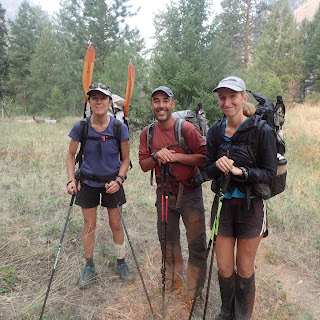 they have jobs that allow them to work 4 months a year and hike 8! After doing the Pacific Crest Trail and the Appalachian Trail they were looking for more, and found the 2400 mile "Hot Springs Trail" that stretches from Santa Barbara, CA over/through the Sierras, across Nevada, and up through Idaho to Canada.  It's not yet well-known, but if the guy's enthusiasm is any indication (the heavy 600 page guidebook on that link) maybe it will get that way?

Sue decided to hike the gorge with the couple, and they had some interesting facts:  like many through hikers, they were using running shoes (her) and very mellow hikers (him), they never treat water (and have had no problems, further validating my point!), and she literally "eats" three protein/caloric shakes per day ("Jimmy Joy" - an odd name for an odd "diet")....and nothing else.  Which I guess is great:  not actually eating means no need for a stove!

Reaching the Middle Fork represented the last leg of our journey.
Although the Middle Fork is highly regulated and permits are hard to come by, the Forest Service kindly accommodates descents of the floatable tributary streams by allowing people to float the river without camping on it, which is quite easy to do from Big Creek. 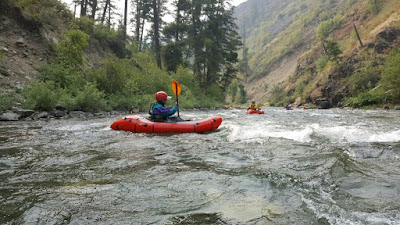 Thus we bumped into our fellow river runners:
ran a few fun rapids, and soon enough we floated into the Main Salmon and back to our launch site.  Indeed, the River of Return.

Kudos again to Forrest McCarthy for coming up with this great loop in the first place, and big thanks for the New England Pack Rafting team: 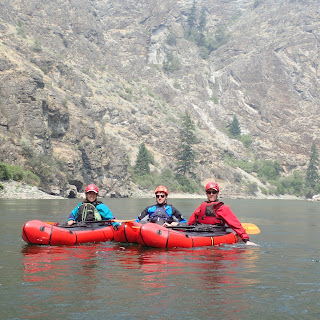 for making the journey out here, and to brother Paul 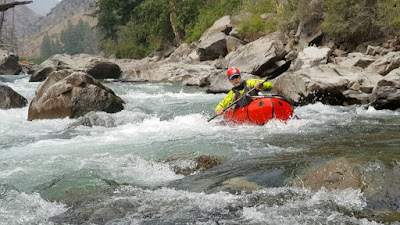 for being a great pard on another adventure!