Well, it happened:  President Obama created the Bear’s Ears National Monument yesterday!  For us bleeding heart lib’ral extremist  tree huggin, granola-eatin’ wackos we heartily raised our too-expensive locally-brewed craft ales in a toast to this needed move.  Despite the threats and cajoling from the likes of Utah Governor Gary Herbert, Senators Hatch and Lee, and representatives Bishop and Chaffetz, Obama correctly saw through the haze of bullshit-slinging and did the right thing.

Far smarter people have and will write about this monumental monument designation – including the indefatigable Brian Maffly of the Salt Lake Tribune who had the lead story, and the description of what the monument includes in the paper today (fortunately he only barely mentioned how awesome the canyoneering is in that area, and didn't mention at all the great pack rafting and bike touring there!).    But I feel qualified to opine, because….well, I live in Utah, I’ve visited these areas, and I help pay our elected officials’ salaries!

This past summer I wrote an article about bike touring in the nearby Grand Staircase Escalante national monument for the Utah Adventure Journal.  We didn’t necessarily go there to analyze the economic and social impacts of national monument designation 20 years after President Clinton’s creation (we just wanted to do a nice, rugged, beautiful tour!) but given the push to create the same for the Bear’s Ears area it was impossible to ignore the effects on the GSENM given the Sky Did Fall (on GSENM) and The Sky Will Fall (on Bear’s Ears) cries from Utah’s politicos.  I won’t re-create that article here, but fundamentally my point was thus:  our extensive bike-saddle research indicated to us that monument designation has been an economic boon to that region due to dramatically-increased tourism, and the wails of the cattle grazing and mining industries of economic failure have been misleading at best and outright lies at worst.

Many, many moons ago, in one of his earliest childhood memories, my dad remembered sitting on the steps of his house in a small town in central Kansas listening to my grandfather and his friends talk business while smoking cigars and watching the long sunset over the fields of the Midwest plains.  My grandfather owned a bridle factory, and at one point he memorably declared “The tractor will NEVER replace the horse!” for some important technical agrarian reasons that my dad didn’t remember.  It is a tangential story that is reminiscent of what Utah politicians seem to keep saying in Utah and elsewhere:  “Solar power will NEVER replace coal!” and "Cattle grazing is an integral part of our economy!".  Ultimately, I don’t think that the US government – nor anyone else – ultimately saved the bridle industry.  So why should we continue to subsidize and support the grazing and extractive industries?

First, grazing.  According to the BLM’s grazing website, the 2016 fee for grazing a cow and a calf on federal lands is $2.15 per month, or $25/year.  Interestingly, the fee started with a base value of $1.66 or $19.92 per cow/calf per year…..in 1966!  I’m no economist, but jacking the rates $5 over 50 years  is a pretty good deal for cattle owners!  And – like the Grand Staircase – grazing allotments will be grandfathered in, and in the GSENM 96% of the original allotments that existed in 1996 still exist today!   In the meantime, the Grand Canyon Trust has tried to buy out rancher’s grazing rights to retire them, but they have almost no value because….there’s no grass left because of over-grazing!   All of which also applies to the Bear’s Ears, so deep cattle grazing losses are a misperception.

Natural resource extraction:  No one who puts gas in their car needs to be told that energy prices are low.  The price of natural gas – which may or may not exist in the Bear’s Ears area – has been notoriously fickle: 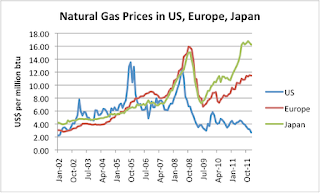 And anyone who has been to Vernal, UT, SW Wyoming, North Dakota, etc will tell you that their boomtime economies of just a few years ago have completely dried up.  And it’s not like a seasonal job (typically associated with tourist-based economies): those jobs don’t come back until the prices rise.    And coal is in the same boat:  despite the future leader of the Trump Nation’s boasts, coal as we know it ain’t comin’ back.  Here’s the price graph: 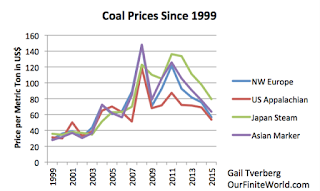 And even if it did, automation has made the typical coal miner job somewhat obsolete (and a good thing too; NPR had a depressing story last week about the proliferation of the deadly Black Lung Disease in coal country).

Since Orrin and company have been the most vociferous opponents of BENM designation, I thought I’d take some of their other complaints one by one.

Jason Chaffetz:  “The midnight monument is a slap in the face to the people of Utah.”  Actually, contrary to Clinton’s truly surprise announcement, this has been in the works for months, and in October Secretary of the Interior Sally Jewel was in Utah for 5 days talking to members of all the leaders and constituencies about the implications of monument designation.  Ironically, Chaffetz himself and fellow UT congressman Rob Bishop created their Public Lands Initiative bill last spring specifically to try to subvert national monument designation (it didn't come to the fore in the most recent congress), so it’s a stretch to insinuate that this was a desperate, last minute gesture.  And over 50% of Utahns support national monument designation.

Orrin Hatch:
“With this astonishing and egregious abuse of executive power…” – As Orrin himself knows very well after being in office since nineteen hundred and seventy six, the Antiquities Act has been used over 100 times since Republican president Teddy Roosevelt came up with it, including some by those nutty preservationists like George W Bush, Ronald Reagan, Richard Nixon, and George HW Bush.

“The President's proposal, like so many others, goes well beyond the original authorities of the Antiquities Act, which was intended to give presidents only limited power to designate special landmarks, such as a unique natural arch or the site of old cliff dwellings.”

Again, according to Wikipedia:  “The first use of the Act protected a large geographic feature – President Roosevelt proclaimed Devils Tower National Monument on September 24, 1906. President Roosevelt also used it to create the Grand Canyon National Monument – the first step in protecting that place of great historic and scientific interests.”  Anyone who has read one bit of information about Teddy Roosevelt knows that he was all about preserving large swaths of land.

Senator Mike Lee:  "This arrogant act by a lame duck president will not stand. I will work tirelessly with Congress and the incoming Trump administration to honor the will of the people of Utah and undo this designation."  Mike Lee calling Obama "Arrogant?!!?"  Now that's calling the kettle black!  Again, according to  Wiki:  The United States Supreme Court has repeatedly upheld presidential proclamations under the Antiquities Act, ruling each time that the Act gives the president nearly-unfettered discretion as to the nature of the object to be protected and the size of the area reserve.”  That said, a super scary possibility is that Mike Lee (and his brother) is/was/were/are supposedly on Sir Trump's list of potential Supreme Court justices, though that probably waned when Lee said he voted for Gary Johnson.....but even so, Trump may/will be nominating a new justice regardless  (unless Obama really wants to be bold and do a full appointment during the Congressional recess, which - according to Robert Reich - is not only possible, it has precedent)

Utah Governor Gary Herbert, in an interview with Ari Shapiro today, said that one of the county commissioners  - by congressional demand – must be a Native, and that Native doesn’t support monument designation, therefore the native population doesn’t support it. However, this guy: David Filfred, Navajo Nation Council Delegate representing Aneth, Teec Nos Pos, Red Mesa and Mexican Water Chapters in Utah was quoted today: “We are grateful for President Obama's brave action today. For the first time in history, a president has used the Antiquities Act to honor the request of Tribal Nations to protect our sacred sites. In doing so, he has given the opportunity for all Americans to come together and heal."  To be honest, my sum total experience with the SW Native population has been gleaned from a few Tony Hillerman novels, but most news accounts I’ve read indicate that there are a few standout individuals who oppose the monument, but entire tribes support it, since the entire intent is to “preserve antiquities” (though it’s understandable if the Native population is suspicious of the integrity of big federal agreements).

Another meaningless quote by Herbert:  "By unilaterally locking up 1.35 million acres — an area roughly the size of the entire State of Delaware......"  Who cares? Delaware is tiny and inconsequential!  Utah also has counties with no residents that are as big as Delaware, and no one cares!

Seeing so much blind support from our politicians for good ol’ boy ranchers and executives in the extractive energy businesses when places like Moab, Kanab, and Escalante are clearly prospering from the burgeoning tourist industry associated with national monument designation is frustrating at best.  Therefore, we granola eaters are stoked that Obama took the bold move:

thanks so much to Patagonia and Yvon Chouinard for their tireless support for this, to Sally Jewell for handling it so professionally, and the many others who devoted time and money to this important project. I regrettably donated neither, and I'm glad that it was successful despite my lack of "real" support.