For Christmas in nineteen hundred and ninety six, Mike Elovitz and I flew to Chile a week prior to meeting a posse of guys for a kayak trip in Patagonia to paddle some of its legendary rivers.  We flew to Puerto Montt with no agenda; we had the vacation since it was the holidays and wanted to see and do more in that amazing region than just hustle to the rios.    We had originally thought that we would hang out in Puerto Montt and then follow the tourist trail to Bariloche, but a chance encounter took us on an unexpected encounter with a guy who singlehandedly preserved 800,000 acres of virgin rainforest and changed an entire country in the process.

I was working for Patagonia (the company) at the time, and Kris McDivitt-Tomkins was the former Patagonia CEO who had left the company a year or two before I came on to get married to and move to Chile with the iconic Doug Tompkins, who had founded and sold both The North Face and Esprit before setting his sights on Chile.  Kris was still on the Board of Directors at Patagonia and therefore came to Ventura a couple of times a year, and I’d been introduced to her before, but it didn’t even occur to me that we should “look them up” when we were in the country.  But as luck would have it, when Mike and I walked into one of the Puerto Montt grocery stores to grab some food for our journey to Bariloche, there was Kris doing some shopping herself, and was quite surprised to see us.  She asked what we were doing and when I said “going to Bariloche” she exclaimed:  “Don’t go there; come visit us!  Our place is way more beautiful than Bariloche!”  That was all we needed.

Now this is actually something that I knew already, and it bears description here.  Doug Tompkins first went to Chile to run rivers there; he was already part of the legendary river adventurers who had done first descents up and down California’s Sierras that even by today’s standards are at the upper end of difficulty. Like a lot of adventurers, he fell in love with the wildness of Patagonia and decided to move there.  But true to his roots as a competitive and dedicated adventurer, he didn’t just move there, he went big.  Over the course of several years he quietly bought up land in the Renihue valley from local landowners in the area, and by the time the Chilean government realized it, he had bought 800,000 acres that literally stretched from the big fjord his ranch was in all the way to the Argentine border.  He had literally cut the country in “half” (not quite; Chile’s a really long country!), with much of that now-private land being perceived by the Chilean government as exploitable, extractable, harvestable natural resources.  By the time we arrived in Pumalin, Doug Tompkins was a household name in Chile, and was a serious threat to the Chilean government.

Pumalin is a challenging place to get to, and our travel there (and back) was an adventure unto itself.  But it ended with us riding in a skiff for an hour in driving rain and pulling up on a mudflat in the dark, with the vague directions to “look for the casa grande.”  We stumbled up the path until finally  - kind of like a Chilean version of Dracula’s castle  - we saw the outline of a big house and a glimmer of candlelight inside.  We knocked on the door, and after a long wait in which we tried to pull off our sodden shoes the door opened, and there, looming above us, looking very proper in his Dockers and pink button down was The Man himself, Doug Tompkins, who took a long look at us and then growled:  “I thought you were coming tomorrow!”   So much for getting off to a great start!

Fortunately Kris came bustling over, shoved Doug out of the way, and made us feel a bit more welcome.  As it turned out, it was Christmas Eve and they were having a nice dinner and she insisted that we join them, and – since I really didn’t know her, nor she us  -we had lots of “catching up” to do.  Doug sat in silence; it was hard to tell if he was absolutely uninterested in the drivel from a couple of miscreants, pissed at us for ruining his Christmas eve dinner with his wife and eating his potential leftovers, was simply a misanthrope, or all of the above!  At one point I excused myself to go to the bathroom, and when I came out -  in a feeble attempt to engage him a little   -I asked “so Mr. Tompkins, that picture of you kayaking in the bathroom” – and he barely looked up, trying to feign interest and acknowledge that he was being directly addressed – “is that in Kings Canyon?”  His eyes abruptly widened and said “Why, yes it is!  Have you been there?”  It was so weird; all of a sudden, since I had been on a burly and beautiful section of river that he had a lot of respect for, all of a sudden I became   -in his eyes – a worthy dinner companion, because his demeanor changed and we were all buddies from there on out!

The next day the rain continued to pound, and after we paddled around the fjord a little in one of his old Dancers and gone for a hike and dried off again, he announced that he could use some help moving some stuff from one outbuilding to another, which we were happy to do.  We went into one of the outbuildings and prominently placed in a big room was a ping pong table, which we were surprised to see.  Doug asked “do you play?”

A little known Diegel fact is there was a time when ping pong was the family game; not only did we have a table (lots of people did/do) but we were also members of the mighty Ping Pong Palace, which occupied the 6th floor of a building in downtown Portland and at the time was pretty much one of the table tennis capitols of America.  The phase ended as I got into high school and tried hard to be cool enough to not like ping pong any more, but the skills were there, if a bit rusty.  So when Doug asked  -somewhat too hungrily, I thought –“do you play?” I thought “well, this might be interesting!”

As I anticipated, Doug Tompkins approached his ping pong like he approached rivers, climbs, business, and conservation:  very aggressively.  He beat me the first game, but in the meantime I realized that he had a surprisingly undeveloped backhand, so I kept forcing that side of the table and was able to take the second game.  Mike was being quite amused to be privy to this peculiar Patagonian Ping Pong party (I couldn’t resist that one) and saw what was happening and wondered how it would end.  Doug also recognized what I was doing and tried to adjust accordingly, and it went back and forth to match point, when I thought “man, he’s so competitive, this is his place, I should just be a nice guy and gracefully let him win”, but then I got ahold of myself and put him away with a slam to his backhand!

After another day or two of continued rain we were getting a bit bored (I demurred at a request for a rematch), and Doug decided that he needed to go back their Puerto Montt place himself and he’d fly us there in his plane.  He’s an accomplished pilot, but the wild look in his eyes as he revved the engines at the end of the grass runway with the rain and wind still blasting gave me a pretty good nervous buzz, which I’m sure he saw in my eyes, and was quite pleased to provide a bit of excitement for us.

In 2005 the Chilean government – having finally moved past tapping the Tompkins’ phones, threatening them, and publicly declaring that they were cult leaders (the whole scene did remind me of the crazy, rich bad guys like Bond's Goldfinger who owned tropical islands filled with minions committed to the cause) – declared all 800,000 acres the Pumalin National Park, which is now one of the biggest tourist attractions in southern Chile and preserves forever a whole biosphere of incredibly rich plant life (I think mostly because it rains incessantly!).  It’s a remarkable tribute to Kris and Doug’s vision and tenacity.

Doug Tompkins died today after swimming out of a sea kayak in big waves in frigid waters.  I’m sure he was probably furious to have been compromised in flat water kayaking, of all things.  I’ve often thought of him as the short, adventurous, capitalistic, conversationist, curmudgeon’s curmudgeon, but there’s no doubt that he’s one of the few individuals to not only use his considerable resources for conservation but also literally change a country for the better due to his passion for The Right Thing, and his vision and passion will be missed, though his legacy will live on. 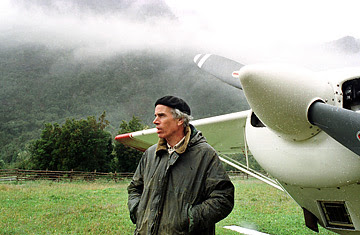 Here's a nice article in the NY Times