An Ode to Colin and Gina 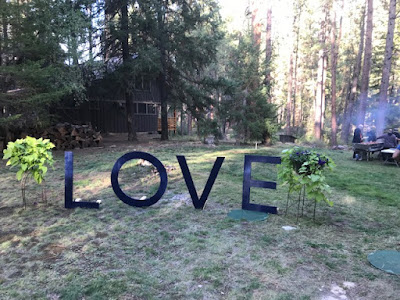 The social journey to the late-September wedding of Colin Hackett and Gina Barendrick started a surprisingly long time ago:  almost 50 years, well before they were even born!  It eventually took a circuitous path through the eons that included a 90th birthday party and ultimately that zone where so many relationships are initiated:  a river trip.

Three years ago our mom Gin was charging down the road to her 90th birthday, and if there’s any good reason for celebrating, it’s making it that long.  Her brother Arno Denecke and his wife Selma had a fantastic brood of 5 kids that my brother Paul and I grew up with (well, he was able to “grow up” with them; I was a bit off the back, but they still indulged and tolerated their annoying younger cousin) and the entire Denecke clan trooped out to Utah to help celebrate the new “nonagerian” (an octogenarian is someone in their 80’s, the lucky 100+-ers are “centenarians”) and it was a fabulous 3 day celebration. 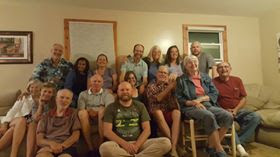 It was so fun, in fact, that we started talking about getting The Family together again, and someone pointed out that we Diegels were big river trip folks and gosh we should do a river trip!  I sorta nodded enthusiastically but thought to myself:  “well, given everyone’s schedules and such that’ll never happen once we all go back to our regular lives we’ll all forget about that.”  However, to my surprise there was plenty of follow up to this idea, and sure enough some months later – as the river permit application season loomed – the conversation was renewed, and the consensus arose that the 4th of July timeframe would be the most convenient for everyone, so we were all going to put in for a few dates around that time, with the focus being on the Middle Fork of the Salmon.

The Middle Fork is second only to the Grand Canyon in its length, stature in the annals of American rivers. It’s 100 miles long, super beautiful in (quasi) wilderness, with many soakable hot springs, and exciting but very manageable rapids. 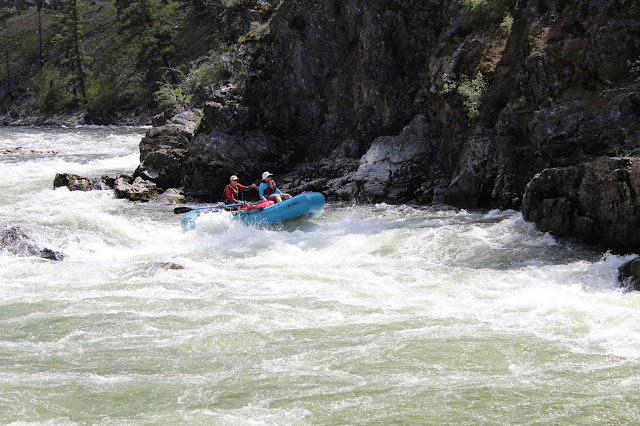 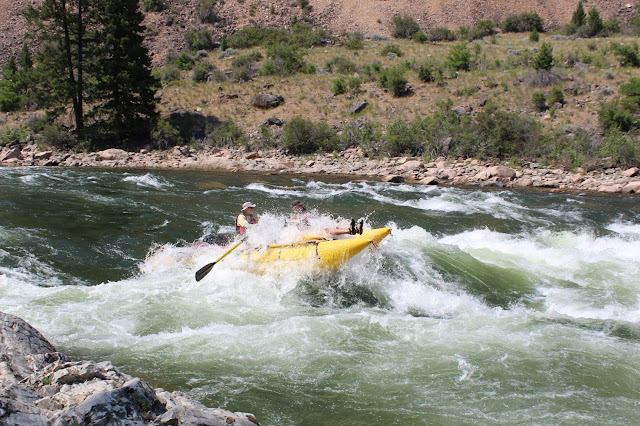 As such, it’s also super popular:  10,000 people apply for permits each year, and 387 permits are given out, for a ratio of 1:30.  We had about a dozen of us putting in for permits, so the odds weren’t with us, and we were targeting the most popular time:  not only post-peak flows which ensured a safer trip, but also over a holiday weekend.  I gamely sent in my permit application along with the rest of the family, and once again thought:  “well, that’ll never happen.”  So it was with great surprise that after the lottery date in early February I got a group email from Cousin David Denecke saying “We have a winner!” and thus we had ourselves a river trip.

Veteran river runner and consummate nice guy Brother Paul volunteered to be the trip leader and patiently put together a great trip, which ultimately became a 3-family trip as we were fortunate enough to combine forces with the families Martin/Gray and Adams/Wingate expert rafters to have a 20-odd strong contingent of floaters.  There were a couple of token friends invited as well, including Gina, who was about as brash and funny as they come, and it was clear that she was there to liven up the party (as I was to learn:  she always does) and fish the shit outta the Middle Fork, since she’s sort of a semi-pro fisherman. 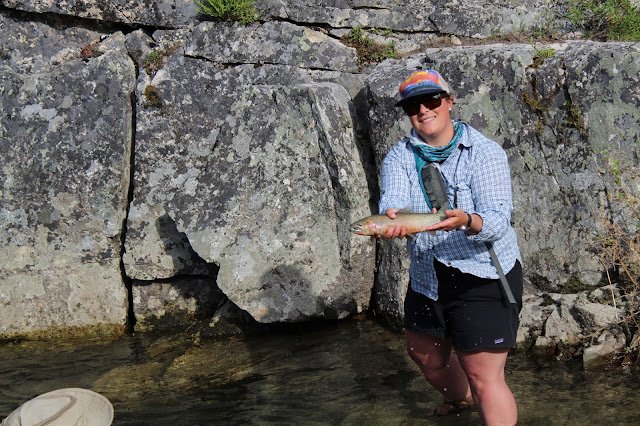 For me it was great; living quite a ways away from our extended family I had spent too little time with them, and river trips are a great way to connect and reconnect with new and old friends and relatives.
One of those relatives that I was keen to hang out with was Colin Hackett.  Colin is the son of my cousin Ginger, who is named after our mother Gin; here’s a photo of their first meeting: 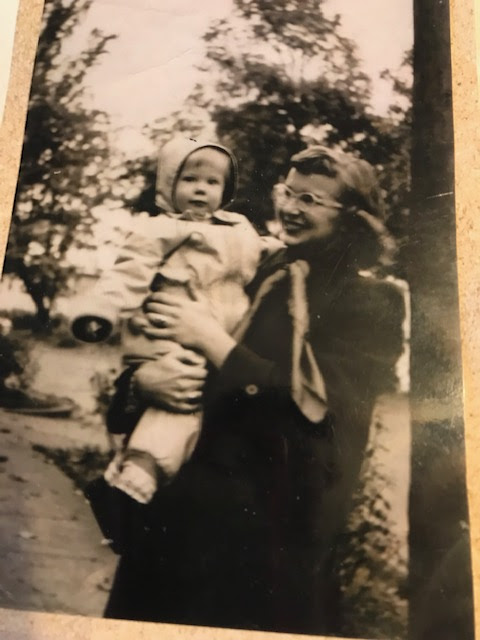 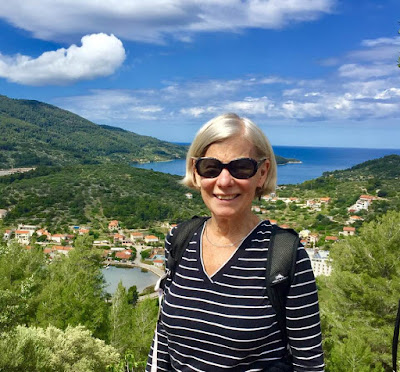 And by an amazing small world coincidence, Ginger realized that she had dated Gina’s dad wayyyy back in the day (high school?  College?).

Colin Hackett is a great guy:  fairly taciturn but super smart and passionate, with a career as a lawyer specializing in helping Oregon Latinos navigate the byzantine American legal world.  Colin was married and divorced, and on the third day of his trip I was pleased to have just Colin and I together on a raft.  As we rowed I asked him if he had a lady these days, and he said he’d been working the online dating scene for a while, and regaled me with some hilarious  - and horrifying! - tales of that scene.  As we floated, a thought occurred to me:  “You know, that Gina….she’s quite a sparkplug, and she has made it pretty clear that she’s quite single.” To which Colin replied – a bit quickly – “Oh, I know!”  hmmmm…..
For better or worse, river trips create a pretty intimate environment for participants.  Not only do you get to spend good quality time floating on raft bobbing down a river, but there’s lots of camp time to work with and hang with as you all are doing a bit of groveling in the sand and on the river together:

“Believe me, my young friend, there is nothing - absolutely nothing - half so much worth doing as simply messing about in boats.”
― Kenneth Grahame, The Wind in the Willows

And thus, for better or worse, we all had a pretty front row seat to watch a romance blossom.  Which can be awkward for the participants in said budding romance, but in this case, it was even more acute:  Colin’s mom was one of the participants!  As Ashley later so perfectly said:  “It doesn’t matter if you are 12, 15, 18, 23, or 40; having your mom watch you try to hook up with someone is awk-ward!”  But they didn’t too much care, and everyone was happy. 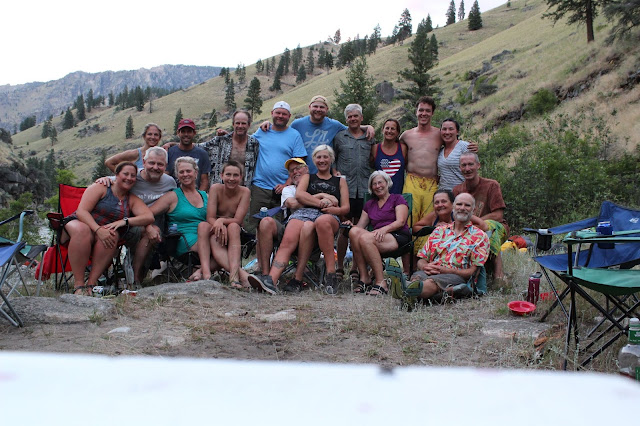 Of course, many riparian relationships wither as the romance of the river environment fades away, but I noticed that there were lots of social media posts with pictures of Colin and Gina doing quite a bit of this and that, and I heard through the grapevine that it was “going well” and they were super happy, which of course warmed our hearts.

Then last spring we heard the news:  Colin had prostate cancer.  Yikes.   A lotta men get prostate cancer, but not at the ripe young age of 40.  But taking advantage of their respective strengths of boundless energy and strong stoicism, Gina and Colin attacked this challenge head on, got a ton of input from top level docs, and got some fairly intense treatment, that of course took a bit of a toll on his body.

But not on their mind and spirit.  I am not quite sure of the timing, but sometime in the middle of this challenging chapter, they (apparently; I’m not privy to the details) decided that – and I’m paraphrasing a bit here, because it’s what I assume they said: “Life in general is short and uncertain, so we are getting married!”  And there was much rejoicing.

Thus, on a chilly weekend in late September, on the banks of the lovely Metolius river in Central Oregon at the cabin that Ginger and her most-excellent husband Dave have cultivated as a getaway for family and friends over generations, Colin and Gina sealed the deal, with the honorable River Trip permit-getter David Denecke appropriately doing the presiding. 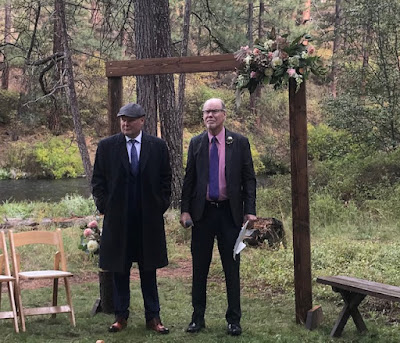 Colin has not necessarily “beaten” the cancer per se and there are treatment challenges that lie ahead, but in the meantime he and Gina are tearing into a house remodel and are charging hard into a great life together.

We Diegels are pleased and honored that we were able to be part of this journey, and we are all looking forward to the next big birthday party and river trip together! 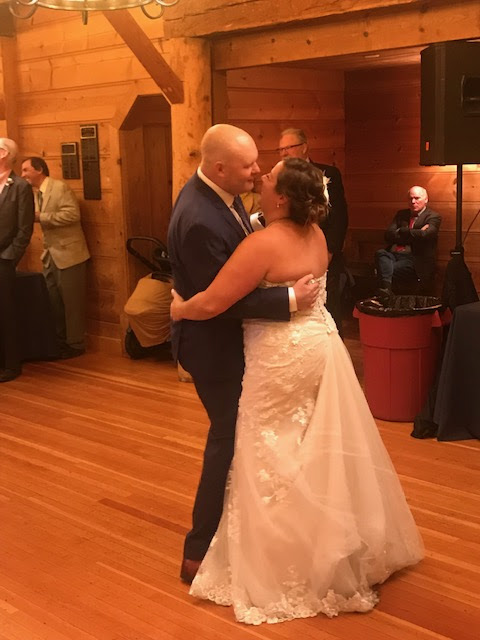