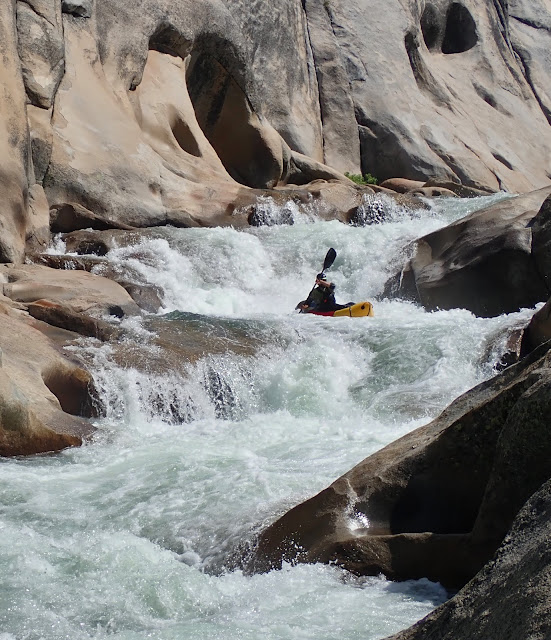 We'd already had a long day of running long and continuous slides, rapids, and waterfalls littered with holes that were amazingly powerful considering the relatively low amount of water that was flowing.  We'd had innumerable scouts, lots of short portages, and a couple of long, hot carries around the infamous Cherry Bomb Gorge and much of Waterfall Alley.  Now we had a little over an hour of daylight left, but were still deep in the middle of yet another granite gorge of big drops, steep high walls, and potentially skitchy portages on steep slabs that ramped down to the river.  However, we didn’t have much of a choice; we had to press on through the gorge. 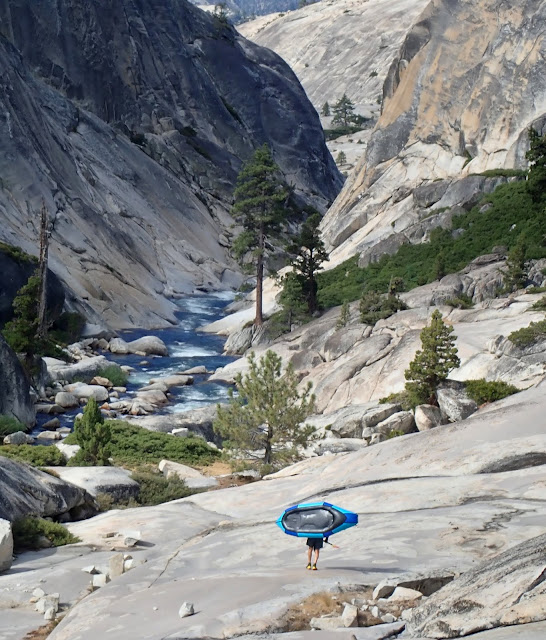 Upper Cherry Creek has, over the last maybe 15 years since it was "discovered", become a global phenomenon for the relatively small elite kayaking world.  While there are steeper creeks, more difficult rapids in longer gorges, and more arduous approaches into more remote areas, there are few that have that combination in such density and there is no doubt that the setting  - in the Sierras' iconic white granite alpine vastness - makes it unlike anything on the planet (at least, according to a very credible source:  me!).  Although there appears to be a gauge where Cherry Creek enters Cherry Lake, the gauge inexplicably doesn't work (if only I knew someone who knew anything about river gauges!), so it seems that the exclusivity of The Club that gets to actually paddle this gem has tightened up some, even in the social media era.  The Club seems to be the domain of hard shell class 5+ kayakers, but every trip account from its members is rife with accounts of the sufferage associated with the dozen mile hike in with 9 foot long, 45 pound boat that is then loaded up with camping gear and food for 3 days up a long, hot, south facing ridge.

A long hike for a scenic float typically makes a natural destination for the (relatively) effortless hiking afforded by a 9 pound pack raft, but there's a slight disincentive: in 11 miles the river drops 2400 feet, and with one of those miles relatively flat, that's an average gradient of almost 250 feet per mile.  Not a crushing gradient, but that's still pretty damn steep, especially with the reputation of walled out gorges. Jeff and I had warmed up the day previously on the upper Tuolomne's slides and drops
nd thought "hey, that was fun; let's go bigger!"  We'd heard that the consensus was that upper Cherry was still too high due to the near-record Sierra snowpack, but that it was "fun" if one wasn't committed to running the big-step-up Cherry Bomb Gorge that itself was portage-able. We gazed at the night sky and saw that a few stars were mostly aligned, so off to upper Cherry we went.

I was a little surprised that there were no kayaker-looking rigs (Toyota Tundras with racks and Immersion Research stickers) at the trailhead and there'd clearly been very little use on the trail this year, which considering that this was a global destination with a narrow window of flow paddle-ablity was a sign that indeed The Club figured the flow was still too high.  With a vow that if our first visual indicated that the creek was cranking we'd just treat it as a backpack trip with boats, we shouldered our packs and marched up the trail.   At what I’m sure is the only place called “Lookout Point” in the world, the otherwise-nondescript wooded ridgeline gave way to our first view of the creek far below:
Soon we arrived at Styx Pass 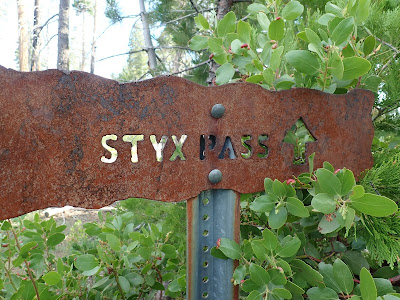 (If the creek had been discovered by kayakers in the 80’s I’m sure that the rapids would have monikers inspired by iconic Styx songs that beg to have rapids named after them:  “Grand Illusion”, “Renegade”,  “Fooling Yourself”, “Lorelei”, and of course the truly weird:”  “Mr Roboto”)

Soon enough we were at the creek’s edge, and to our relief it actually looked a little low for the first small drops below the put in, and we had no problem rigging up and putting on the river, which – if nothing else – was a great refresher after the sweaty hike. 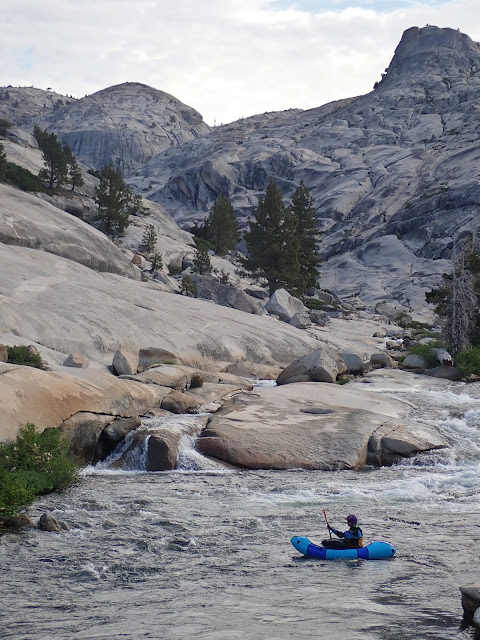 We had heard that the first coupla miles were “fun class 3-4 slides”, and sure enough, they were great.  It was still somewhat slow going since the slides were long and to get a feel for the creek we proceeded pretty cautiously and portaged a few times to avoid the sticky holes at the bottoms of some of the slides. 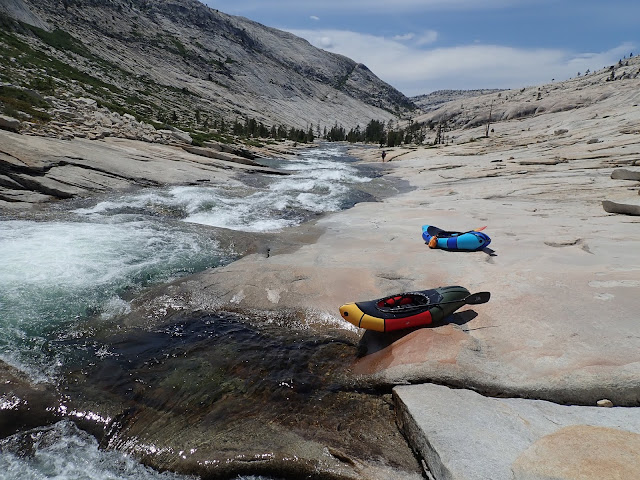 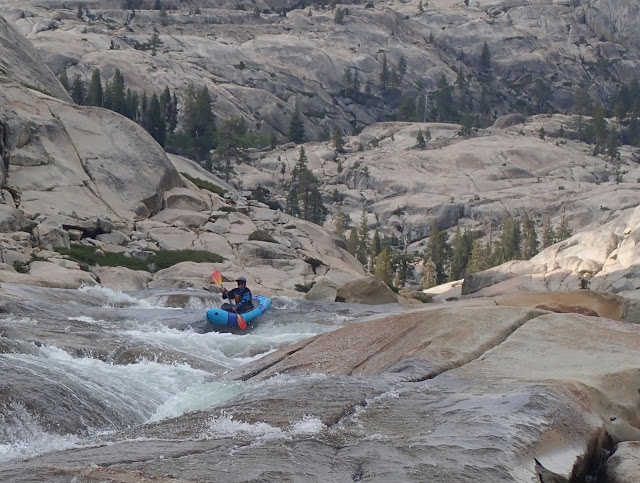 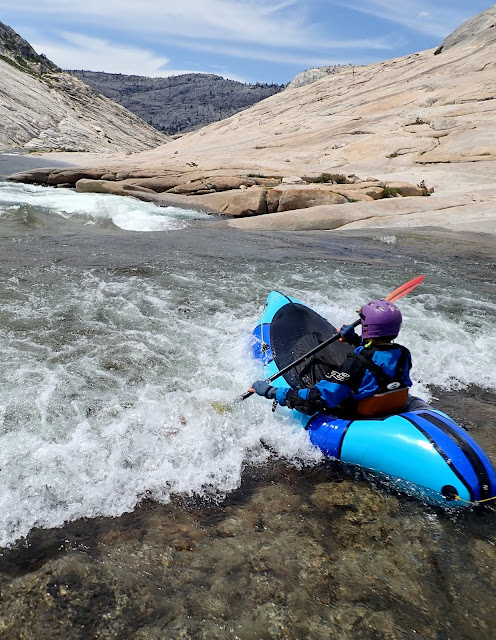 As we slid onto a huge flat granite slab that would be our camp for the night we were thrilled that we’d been able to paddle most of what we’d seen, especially in such a remarkable setting.
But given the gradient of the creek downstream we knew that our progress would be slowed by ever-increasingly-big rapids and many more portages. 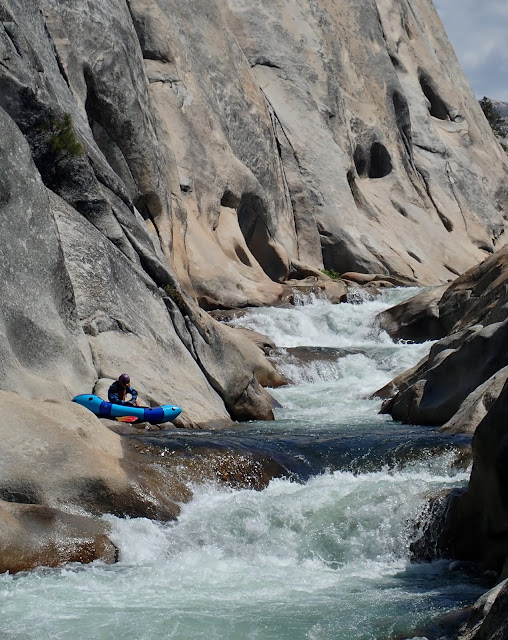 Just downstream was the “Class 4 Gorge”, which – at our relatively high flow – was more of a class 4+/5- gorge, and it took us hours to scout, run, and/or portage the many big rapids that incised the granite.  By late morning I glanced back up the gorge and said “well, we’ve been at this for hours, and we’ve gone almost a mile!”   On one hand it didn’t bode well for the far steeper gorges downstream, but knowing that we planned at least one portage that would bypass a lot of the gradient made us hopeful that indeed we’d make it down to the end of the canyon before we starved to death. 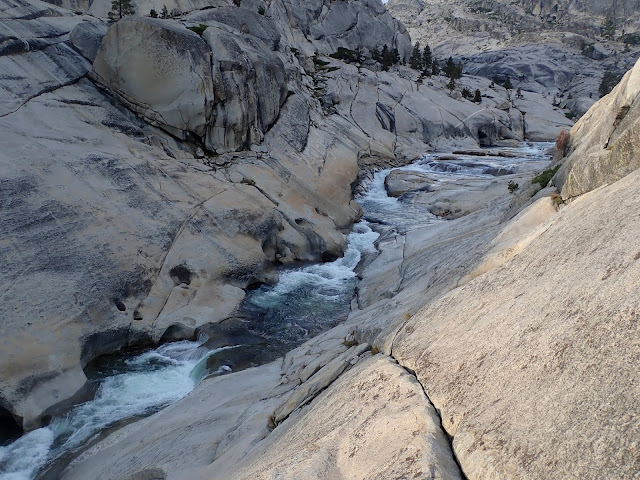 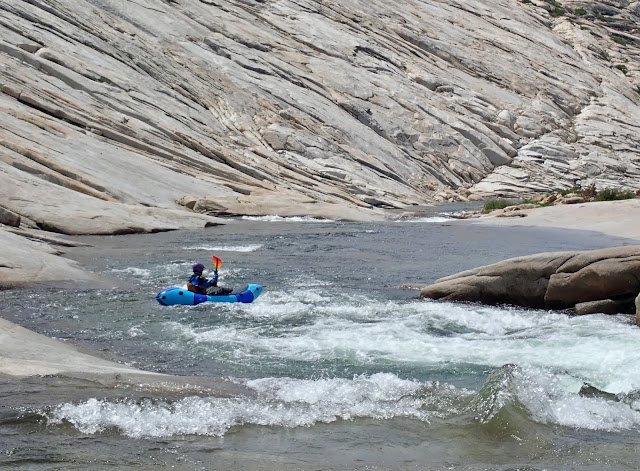 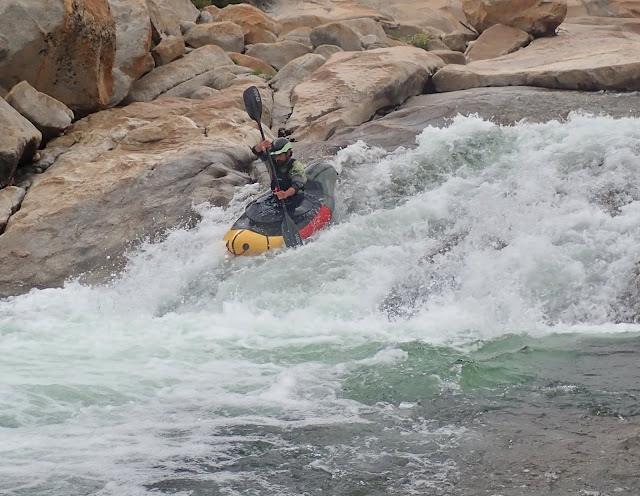 Upper Cherry Creek has a pretty big reputation, and much of that is a function of the crux of the run:  Cherry Bomb Gorge.  One website called it “the most committing place you’ve ever been” with a 30’ falls and many other big drops with steep ledge holes, one of which resulted in a 2016 fatality.   We had no intention of running it anyway, so we didn’t need to take the time to scout and deliberate, regardless of water level.  So we just threw our boats on our shoulder and portaged (the typical scout is to the left, but from Lookout Point we’d seen a long slickrock ramp on the right so we portaged on that side). 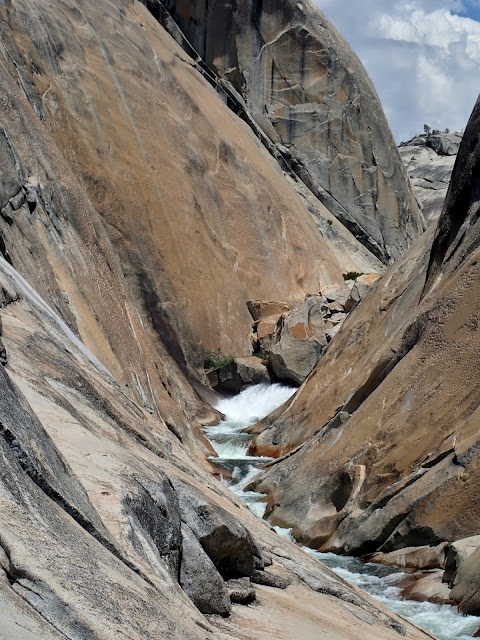 At the bottom are a few big falls known as the Teacups that  - relatively speaking – are more benign drops than those in the gorge itself, but again being wary of bottom-of-big-falls unintentional surfs, we opted to portage, as we did for most of Waterfall Alley, which I called Portage Alley. 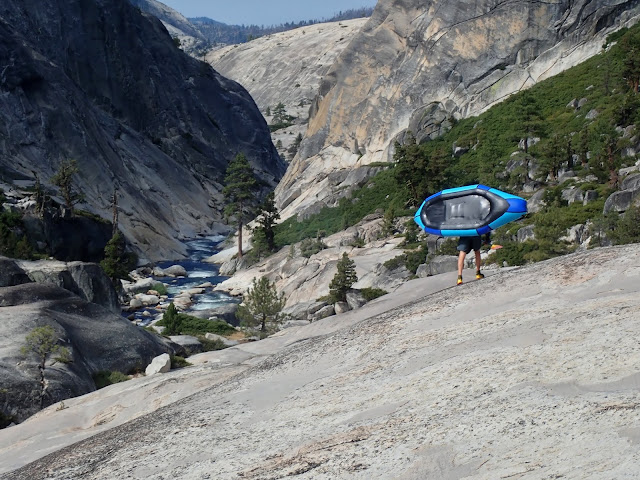 I feel like I’m still working on determining the limits of pack rafts; they are so buoyant that they love to stay on the surface of big holes and they do boof well enough to keep the bow up and get nice flat landings, but they are a little slower than hardshells and hole-riding is trickier without the ability to sort of cartwheel your way out.  We probably could have fired up more of the bigger drops – and gained more confidence as we did run more on downstream, but the remoteness of the run and the close proximity of the drops to each other made me  -at least  - inclined to portage if I wasn’t pretty certain of successfully blasting out to safety below the drops.  We scouted....a lot:
But we got in some fun drops: 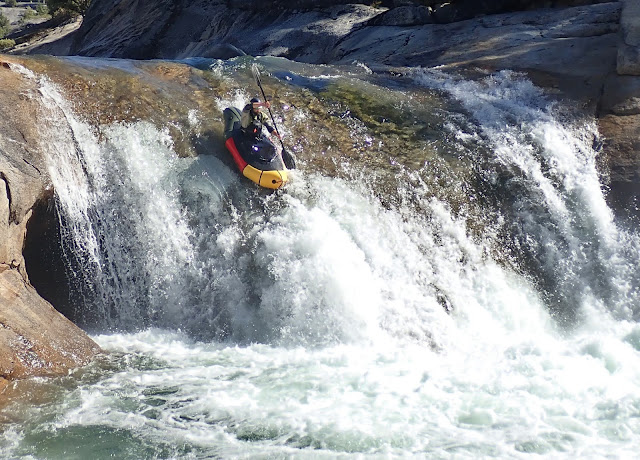 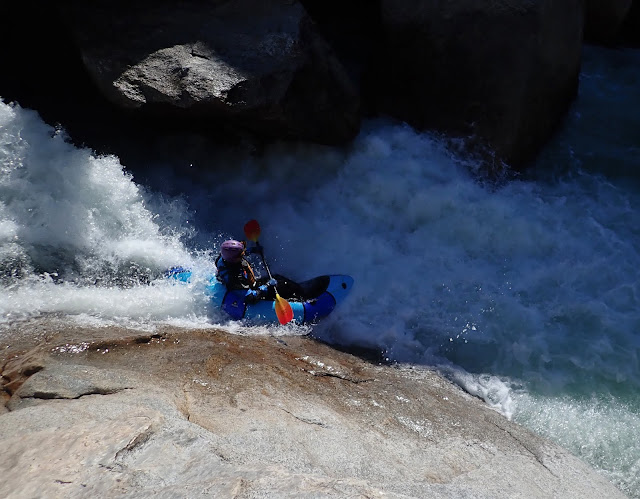 We continued to carefully pick our way down, and while the intensity lifted somewhat, there were still plenty of gradient, big drops and two more gorges to navigate before the placid waters of Cherry Lake.  The Red Rock Gorge was the next major obstacle, and we picked our way down, again running what we could and portaging what we weren’t willing to run.  It was here that my hunger pangs and mental tenacity started to wear on me, and after a long day I was getting a little concerned that either fatigue or impatience might lead to some mistakes that would be unaffordable with an hour or so of daylight left. Some of the bigger drops looked pretty good, but even as Jeff was talking about mounting up for them, I found myself scanning the slabs for body-sized pockets that were flat and wide enough to contain a sleeping person.  However, Jeff pointed out that a long quarter mile and a hundred vertical feet below it appeared that the walls fell away and the white granite gave way to tall ponderosas.  So we came to an easy compromise: Jeff agreed to portage the biggest drops, and I sighed and agreed to push on through the gorge.  Keeping the game on, we ran the last few drops and indeed gratefully paddled through a nice pool below the last rapid in the gorge onto a white sand beach at the foot of some huge trees, and I admitted that this was a far better campsite than a slopey hard slab perched above a class 5 rapid. 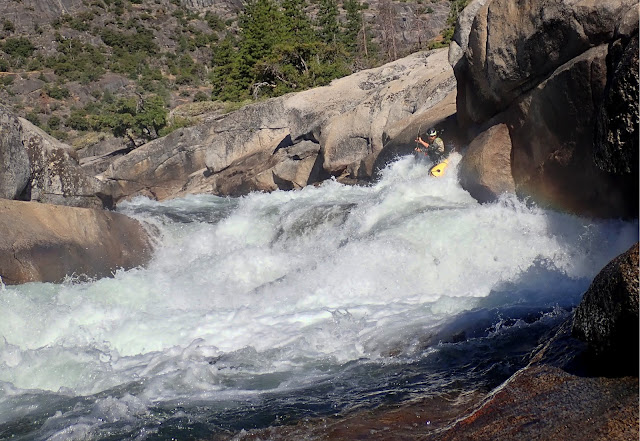 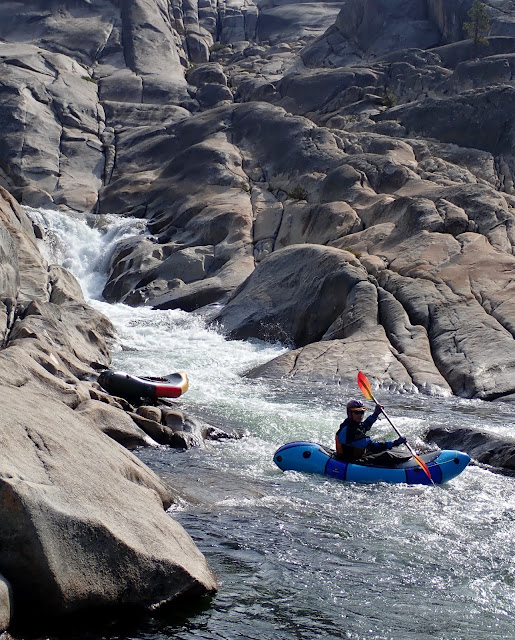 Upper Cherry doesn’t give itself up easily, even at the end.  A tantalizing glimpse of the shimmering lake below: 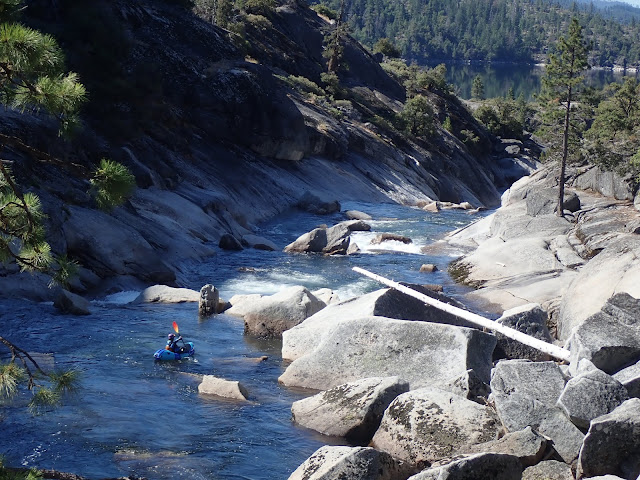 is tempered by the reality of more big drops: 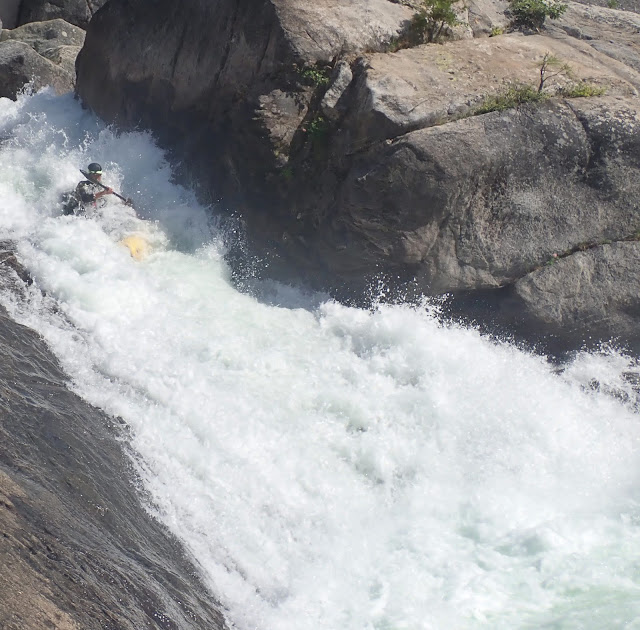 and yet another gorge stuffed with class 5 rapids leading into the lake.  Again we portaged the entire section, and then even the last 3 foot ledge held the only logs we’d seen on the river.  So we just chugged overland and flopped directly into the lake for the mile+ paddle out.

It’s very possible that hard dude kayakers may be a bit disdainful of what may – or may not! – be the first pack raft descent of Cherry Creek since we portaged much and didn’t tackle the marquee gorge, but we didn’t give a shit; it’s one of the most incredible creeks on the planet, and we felt fortunate to be able to dunder down it any way we could, and the fact that we were able to paddle as much as we did made it that much sweeter.
Thanks to Jeff for being a great pard for this adventure, and for taking the time to set up and take all of these shots; his camera prowess almost matches paddling skills!   Here's a great video he put together:
https://www.youtube.com/watch?v=3s3BkT1ETdk