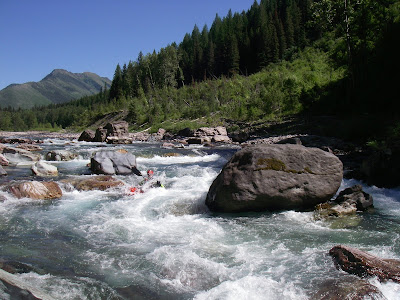 As I've mentioned before, when one gets a pack raft, one starts looking at those squiggly blue lines on maps a fair bit differently, especially here in the West when those little blue lines are sometimes tucked deep into the contour lines of big mountains.  And since we got our pack rafts, we knew that the Flathead rivers were going to be on the list of to-dos.

The South Fork and Middle Fork of the Flatheads drain much of the Bob Marshall Wilderness; the 5th largest wilderness in the lower 48 and when combined with the adjacent Scapegoat and Great Bear Wilderness areas it's the third biggest and is a bit bigger than Delaware (which, truthfully, doesn't mean that much to me! But "The Bob" as the kool kids call it, is big!).  And these two rivers are often referenced as the most-wild, most-pristine rivers in the US outside of Alaska, with very limited access.  As such, they have become natural destinations as pack rafts have become more popular.

Brother Paul first started reading about pack rafting the SF Flathead this winter as we were cooking up trips, and it didn't take much to get me pretty keen.  20 mile hike in from the West, 60 miles of beautiful floating.  I was in.  As I looked at the map, however, I noticed that the latitude of the takeout (where the SF is unfortunately impounded and drowned in the 50 mile long Hungry Horse Reservoir) is pretty much the same as "the put in" for the Middle Fork.  I had heard of the Middle Fork as a raft trip that has only air access (there's one remote airstrip that was grandfathered in when The Bob Wilderness was created; more on that later) and it didn't take too much to see that a mildly intrepid pack rafter could theoretically hike in and paddle the South Fork to its end and then pack back up, march over the mountains again, and hit the Middle Fork for a longer adventure. 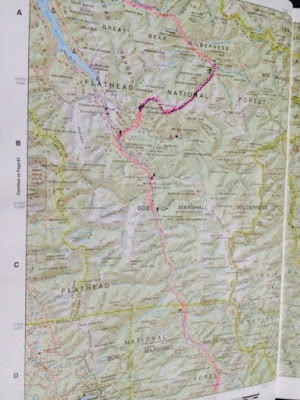 The only problem is that is getting to be a pretty long trip, and even though pack rafts are light relative to....lots of things, they still have a bit of heft and when combined with camping gear and 2 weeks worth of food the load gets pretty big.  So the question arose:  could we get food at our halfway point?

The end of the South Fork is almost 60 miles up a gravel road, and I realized it was unlikely that the friendly brown trucks of UPS made it up to that ranger station very often, but maybe the rangers would help?  They are public servants  - sort of - after all.  So I gave them a call and asked if it was possible to ship a box of food to them somehow, but apparently that wasn't covered in the USFS handbook and was way too far outside the norm and there was no way they could help.  But my next call was to the Diamond R outfitters, who have a lodge and a horse packing business up there, and my new best friend Lisa said "why sure, we'd be happy to help you out!  Just ship it to our office in Kalispell and we'll run it up, and if it nobody's driving we'll fly it in!  And make sure you email us a list of what's in it, so if there's a problem we can just buy and fill food for another box for you!"  Huh?  Really?  You are that helpful?  It was only a taste of what was to come.

Our journey started with Steve, who was an avalanche community pard of Paul and -as it turns out, was also the dad of our friend Sean and had been kind enough to deliver "6 year old black gold horse manure, straight from Montana!" to our garden a few years ago.

He drove us up from the small town of Seeley Lake to the trailhead, and was then going to shuttle our rig up to the end of our journey. 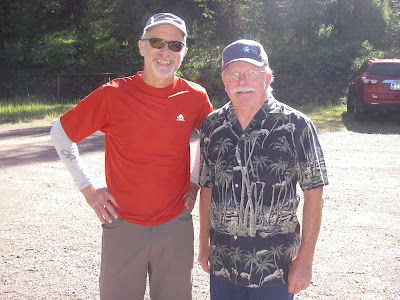 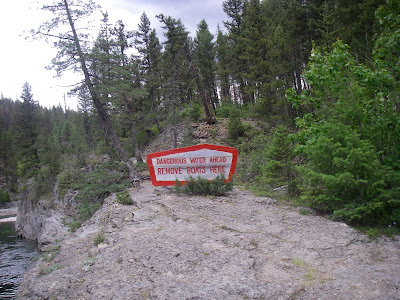 A bit of excitement loomed for us at the bottom of the South Fork.  Meadow Creek Gorge was a 3 mile long section that was mostly in the wilderness area and was deemed super dangerous and pretty much unrunnable, and there was very little info that we could find about it.  We decided to ignore this sign and carry on.
At this bridge we met some great folks who offered to help us out by driving one of our crew around the intimidating-looking gorge just downstream. 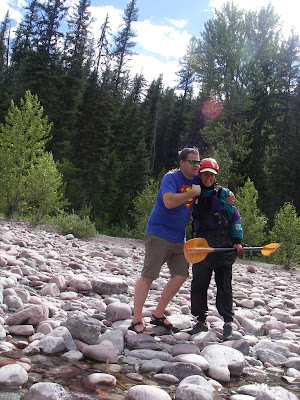 Blake showed me what it's like to have a nice camera..... 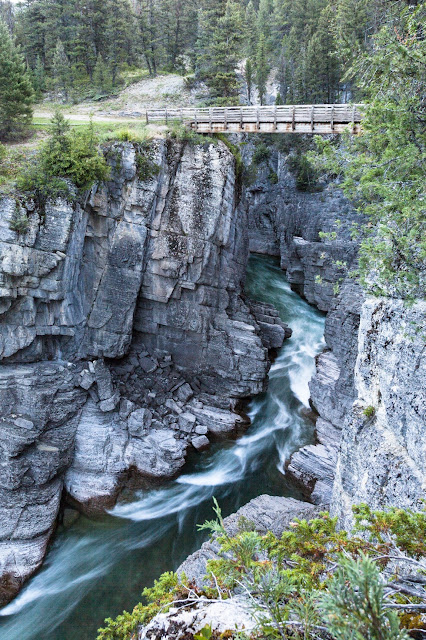 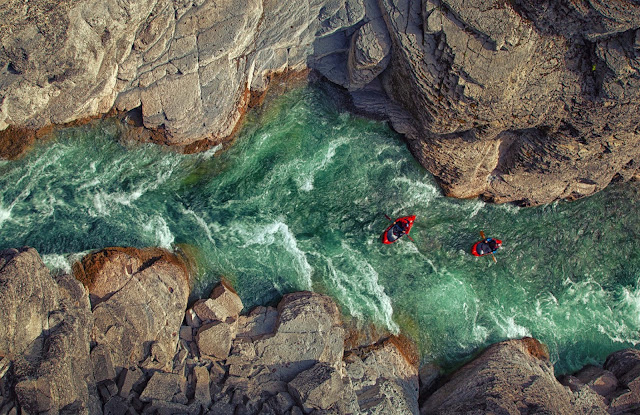 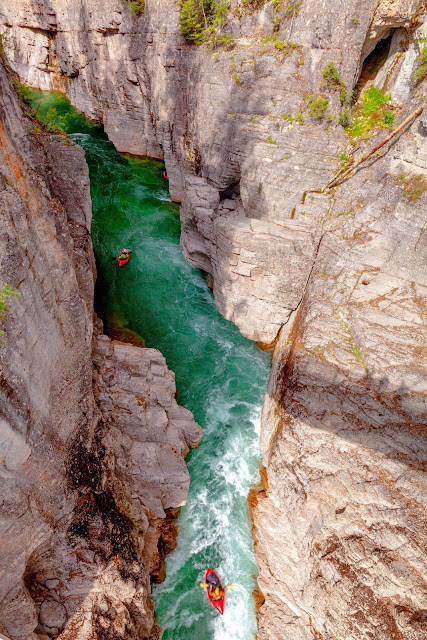 With pretty good scouting we felt like it was good to go, but it looked pretty intimidating
And below this section were some nice rapids 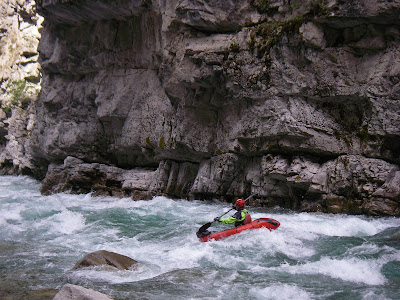 Shortly below this the Spotted Bear River came in to signify the end of the first part of our journey and the moment of truth loomed:  would our 2nd week's worth of food be there?  It was!  Diamond R turned out to be worthy of their name:  not only did the shuttle a big box of food in for us, they said "we had a big barbeque last night and have some leftovers; you want pulled pork sandwiches and potato salad!"  heck yeah!  They refused to let us pay for that, but agreed to take some money to augment my somewhat-short food purchase with some pasta and - more importantly - drive us 9 miles up a hot, dusty, and kinda bleak road to our desired trailhead, which was key.  And soon enough we were back on the trail, heading for the Middle Fork.

And it wasn't long before we suddenly spied these poking out of the charred earth:
I'm no 'shroom expert, but there are two that I know:  Chantrelles and Morels.  I don't know really where chantrelles are, but morels are in burns, and we got a shitton!
After 20 miles of hiking over another pass that separated the three drainages, we came to Shafer Meadows, where there's a ranger station, with the lovely Bailey holding down the fort. 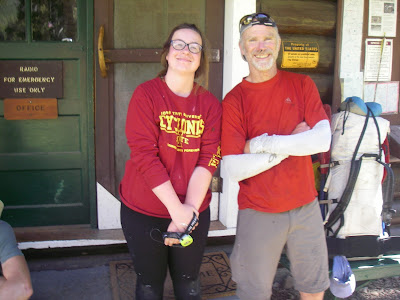 Though it is against the FS rules to let various rogue public types use the facilities, we bribed Bailey with a few pounds of chantrelles in order to use her huge cast iron pans and copious amounts of olive oil to create a feast.

Shafer Meadows is a bit of an island in the middle of a huge wilderness, and it's odd:  as many as 6-8 flights come in per day during the high season, and the runway is a mile long: 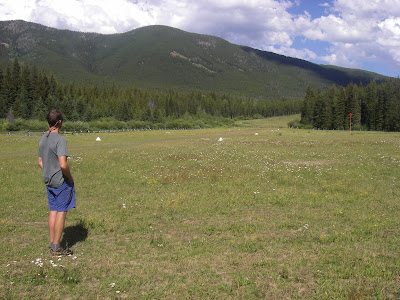 Back at the water's edge, we prepared for launching on our second river... 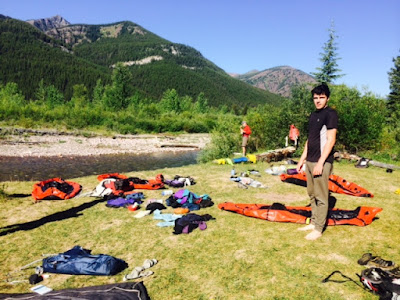 But this time there wasn't a plethora of water.... 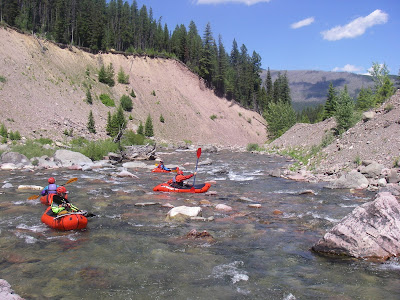 The Middle Fork is pretty short at only about 30 miles, so we took our time and took a layover day to do a good 4000' hike up a mountain off the river. 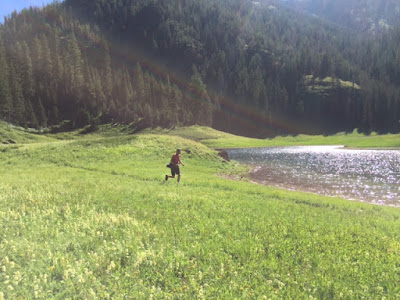 And of course some  more fishing 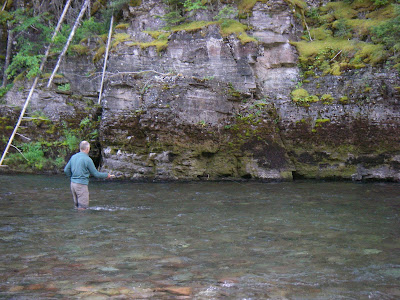 That was pretty successful
It was here that Sue "revealed" that her pack hadn't been fitting her very well, and had worn a couple of holes in her back.  So we took sympathy and capitalized immediately: 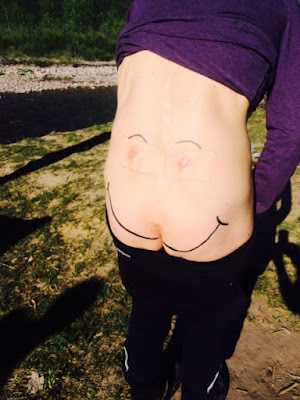 And delivered some fun rapids 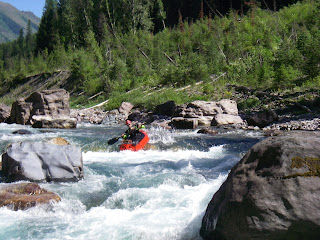 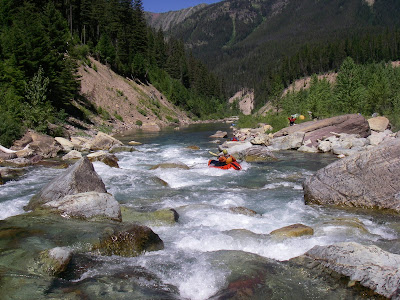 And thus was our trip.  We had high expectations for The Bob and they were maxed! 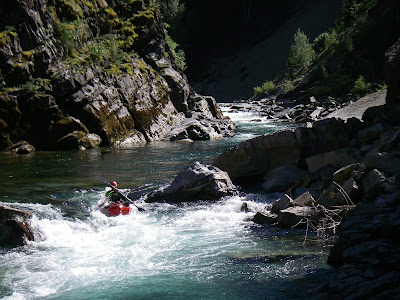 Thanks again to our awesome shuttle driver Steve Thompson, the ladies Lisa, Hailey, and Jasmine of Diamond R and Hailey of Shafer Meadows for their great hospitality and assistance, and of course the great crew of Bro Paul and the New Hampshire Pack Raft Team of Sue, Greg, and SoyBoy Hanlon.  We cooked up a bunch of other future adventures in the area, so we'll be back!
Posted by Tom Diegel at 12:46 AM 2 comments: