I am winging my way to at the moment to wrap up a year-long project that began at the on the east side of the Sierras last February.  As I reflect back on that experience and where it has taken the poject, I think it’s worth recounting.

In a nutshell, we were asked to design and develop a new winter boot for the US Marine Corps, and in order for us to know what the performance needs were, we got invited to spend a couple of days at the MWTC, a pretty sizable facilitity nestled in the mountains near Bridgeport, about halfway between Reno and Mammoth.  We didn’t realize it at the time, but it’s apparently fairly rare for civilians to be able to spend time there, and what we saw and learned was fascinating.

Our visit started with a shakedown meeting to get an overview of the project.  About 12-15 people – some in uniform, some not – crowded into a small meeting room and we started talking about boots.  Basically, we realized that our task was to replace the venerable “Bunny Boot”; a boot that was developed after the disastrous campaign at the Chosin Reservoir during the Korean war.

Apparently the winter of 1953 was brutally cold, so in addition to fighting a way, the American troops had big problems with frostbite and infection that winter, so over the summer they hastily developed a burly, waterproof, and super warm boot.  The following winter was apparently quite mild, but the boot stayed inline for……60 years!   Actually, they were last produced in the early 80’s, but they are so robust that they just keep lasting and lasting through annual cycles of Marine recruits coming up to spend a couple of weeks learning mountain/winter skills.

They also use a winterized version of the "Rat Boot" 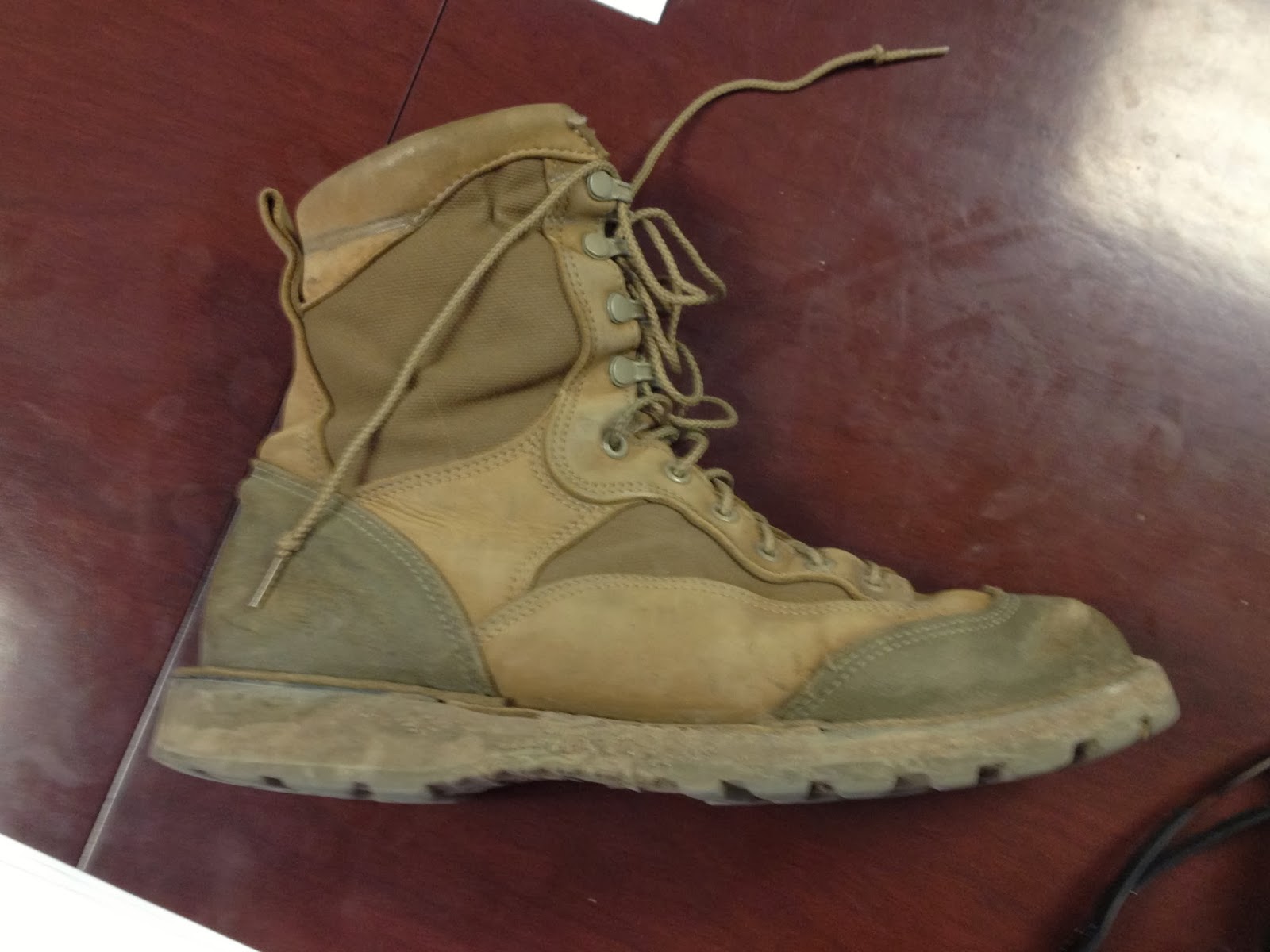 As the meeting progressed there was a lot of discussion about the performance characteristics that the boot needed to have.  A British guy who was there on a “trade” was clearly an enthusiastic mountaineer and was a big fan of the La Sportiva mountaineering boots, and initially he drove a lot of the discussion that revolved around climbing ice, climbing mountains, skiing, etc.  However, there was a very distinct moment when the conversation changed.

One of the uniformed guys very much caught my eye when he came in; a classic, chiseled GI Joe who, despite his big smile and hearty handshake, also had a bit of a menacing feel to him.  Sergeant Nelson had so much confidence that it was a bit unnerving.  And it manifested itself in a dramatic fashion.  After what was probably one too many comments on climbing ice, Sergeant Nelson leaned forward and in a low voice that still commanded everyone’s attention:  “Look. I do not care at all about any of these frivolous civilian recreational activities.  What I want is a boot that I can wear during cold conditions to go in,  engage the enemy, kill him, and quickly and safely return without freezing my men’s toes.  That is all that I need, and we do not have that now.”  Gulp.  This guy clearly would snap my pencil neck in half with his bare hands as he would slam down a beer and probably think equally of those two activities.  And as I am now wrapping up the project, I am hoping that he likes what we have done, and if he doesn’t, I’d rather not meet with him again!
Our next move was the “Rope Room”; I can’t remember why it has that name, but it’s basically the most well-organized and comprehensive gear rental program I’ve ever seen.  There were hundreds each of skis (with tele bindings on them), snowshoes, ice axes, rock protection, boots, clothes, rock shoes, etc.  All perfectly organized in .…uh,  “military” precision 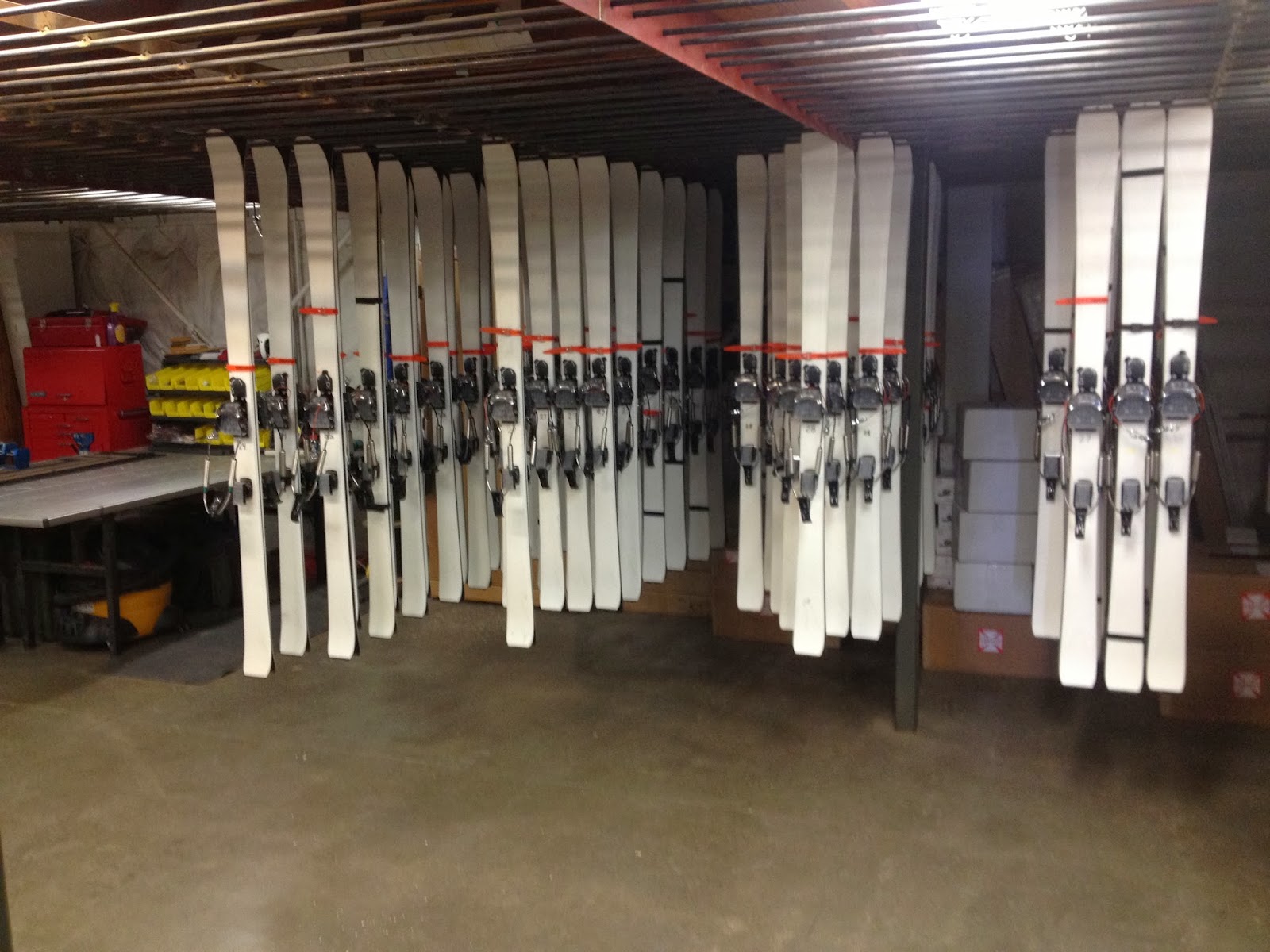 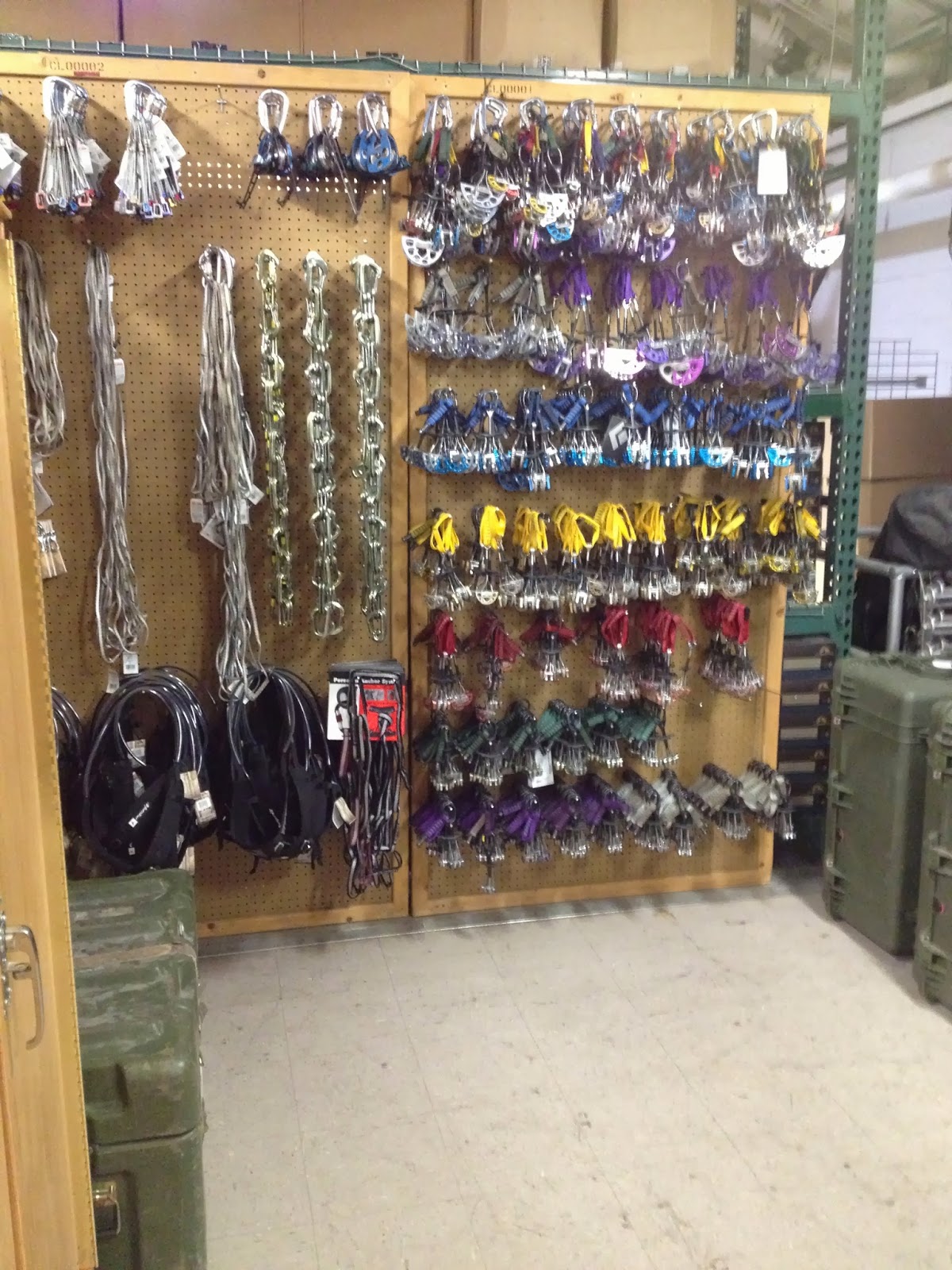 The marines would show up from () or Le Jeune () and pretty much make the rounds getting one of each.  And then head up into the mountains for two solid weeks of training.  Most of the kids – and they were indeed kids – had barely seen snow before, much less winter camped and skied, so it was very much a crash course (the MWTC has taken on a lot more importance over the last 10+ years due to the Afghan war and the severe weather and big mountains that the soldiers have been facing there).

After getting the rental gear tour we headed into the mountains. We were plunked into these crazy little snowcats that apparently were also relics from some ancient war 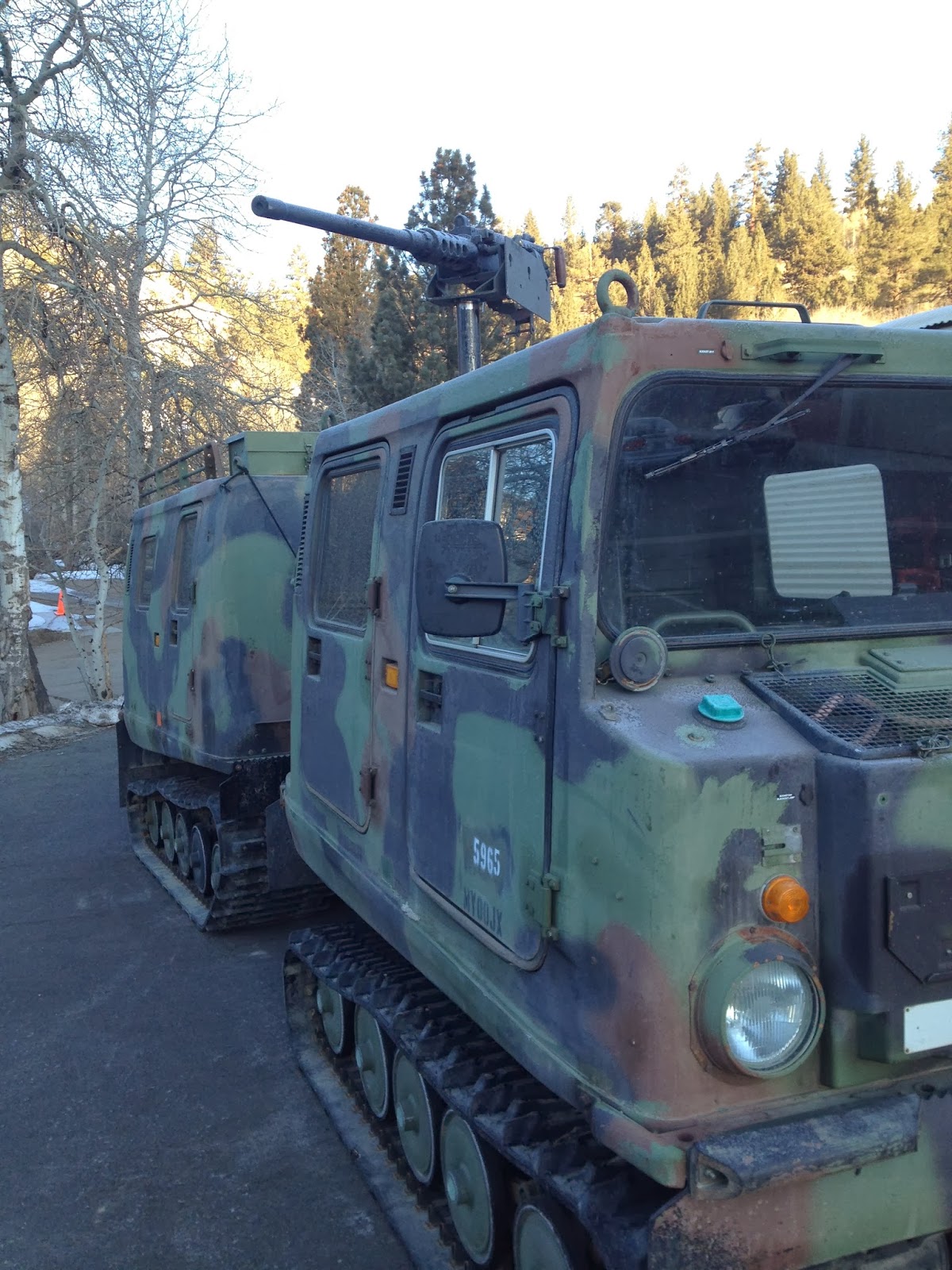 and we rode in these noisy, slow, and rattly snowcats up for maybe 45 minutes and a couple thousand feet into the mountains to get up close and personal with the recruits and their experience up there.
We had been warned that we would likely get barraged with info by the drill instructors, who  -like the British bloke – fancied themselves as mountaineers, but that we should really try to listen to the recruits themselves, because while the recruits would retire to their canvas tents at night and the temps plunged, the instructors would hop back into the snowcats and head for home, where they’d kick off their boots, take a warm shower, and sip some scotch while the recruits took turns “guarding” their tents.  And that’s what transpired; the instructors were telling us what the kids wanted, but when I was able to get a couple of the exhausted recruits alone and ask them about their shoes, they just gave me a sullen look and said “dude, I don’t care.  Just make them warm. That’s all I want.”  But they did need to have at least some semblance of “performance”; these kids had just returned from two weeks in the mountains and were literally skiing with cable bindings grabbing onto those bunny boots. 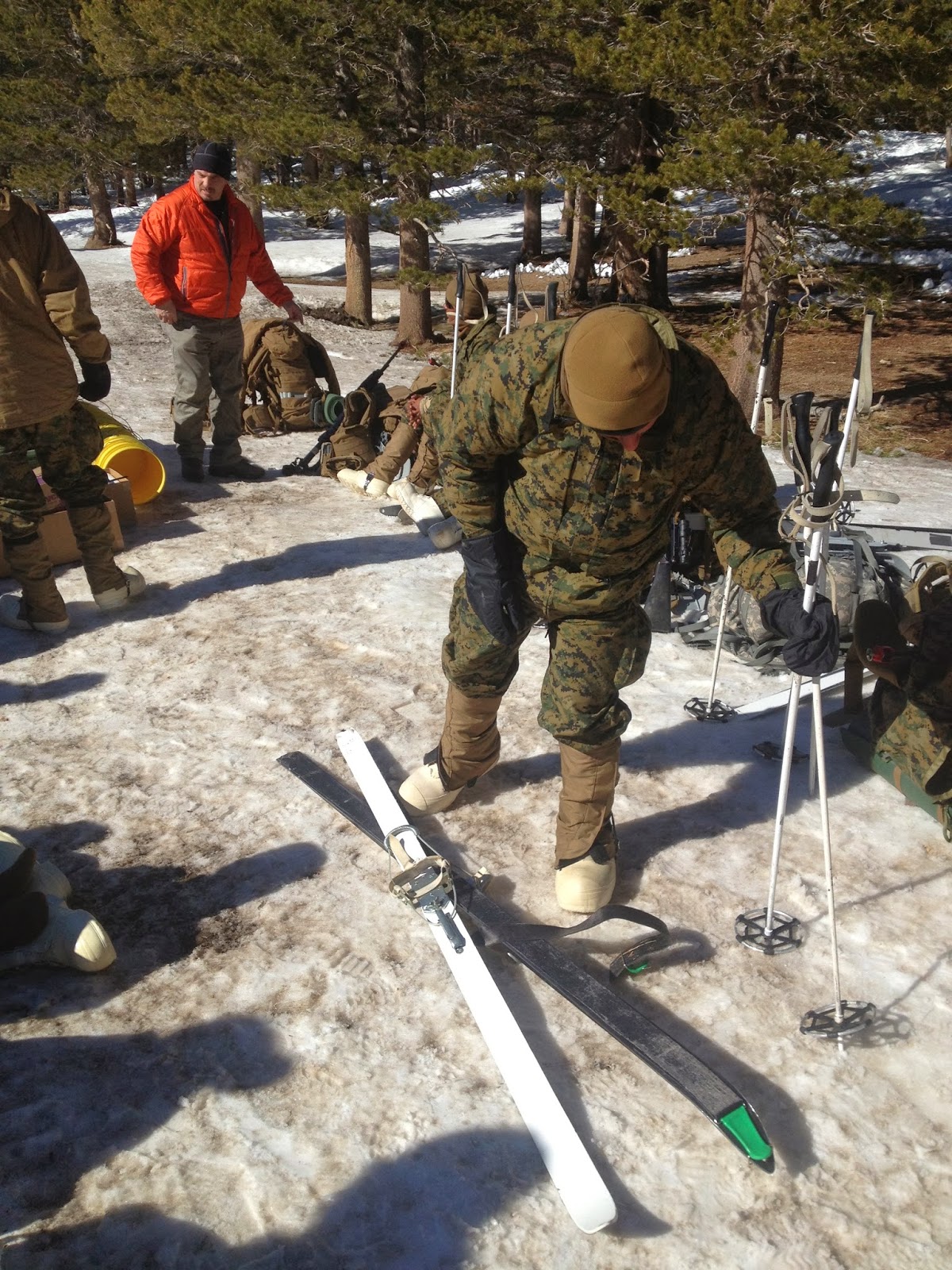 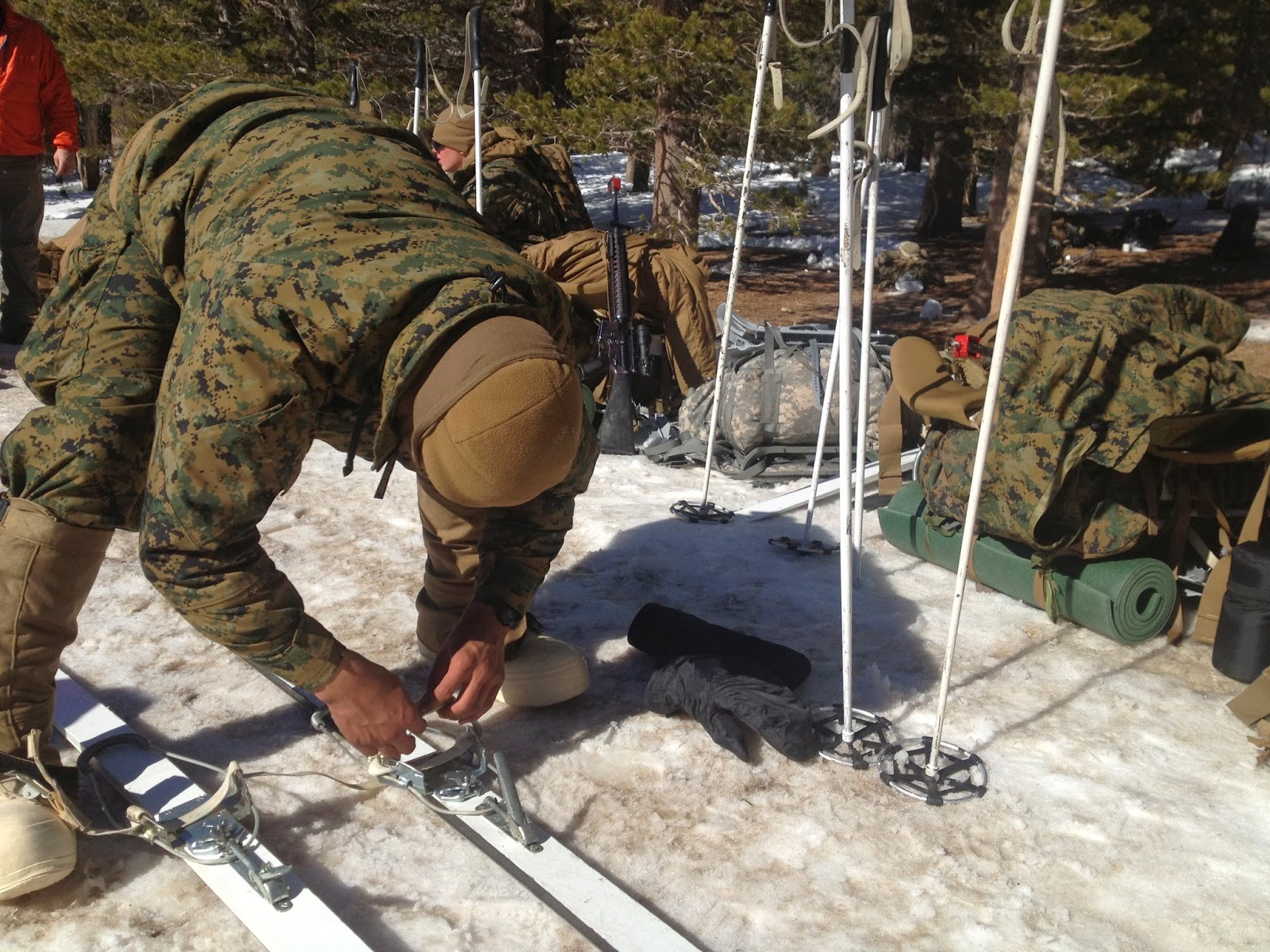 But at least they didn’t know how to ski in the first place!  And the amount of gear and weight was extraordinary:  not only did they have big heavy boots and too much camping gear, they also had a flak jacket that was 30 pounds itself, and a 12 pound gun! 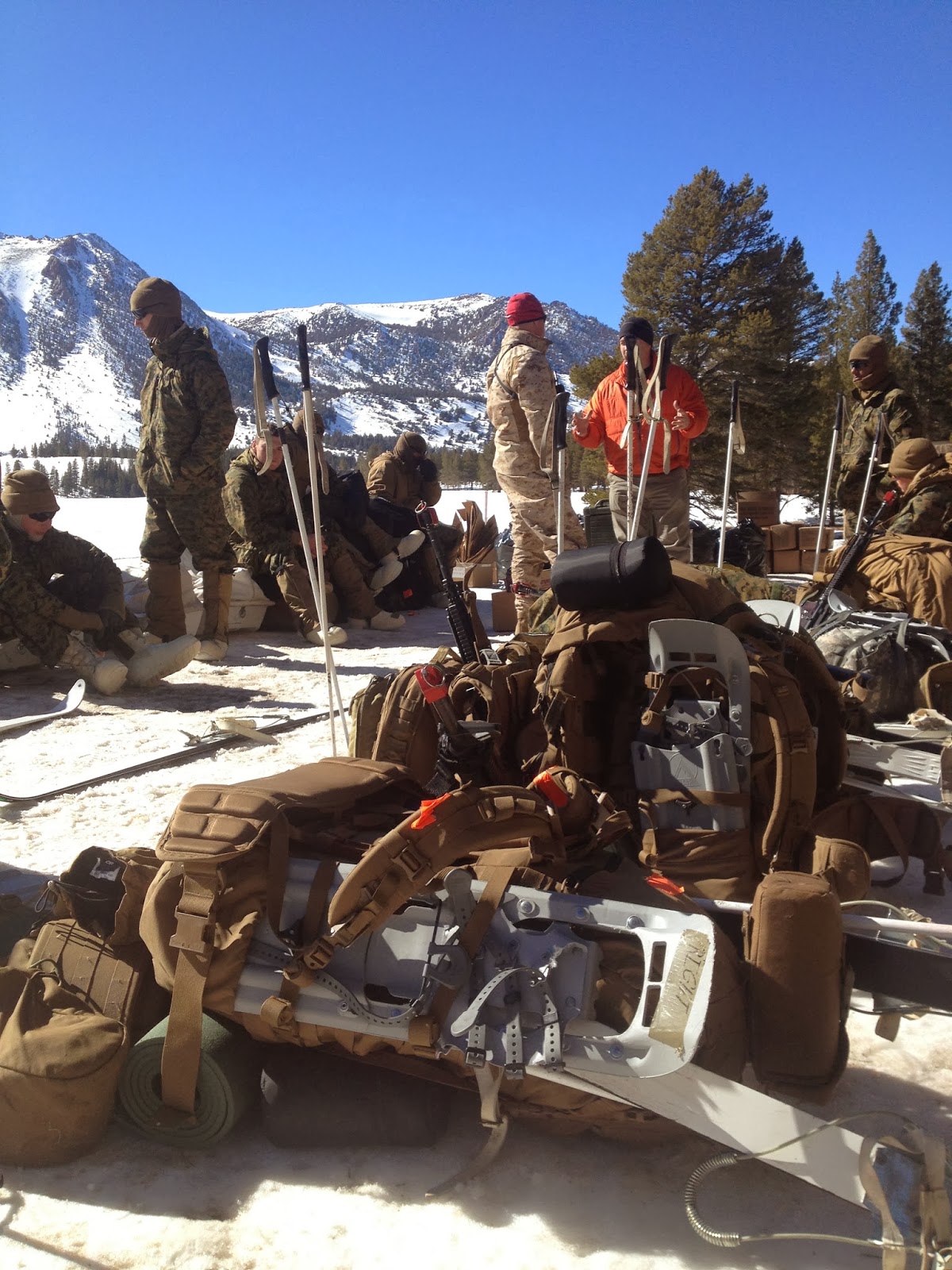 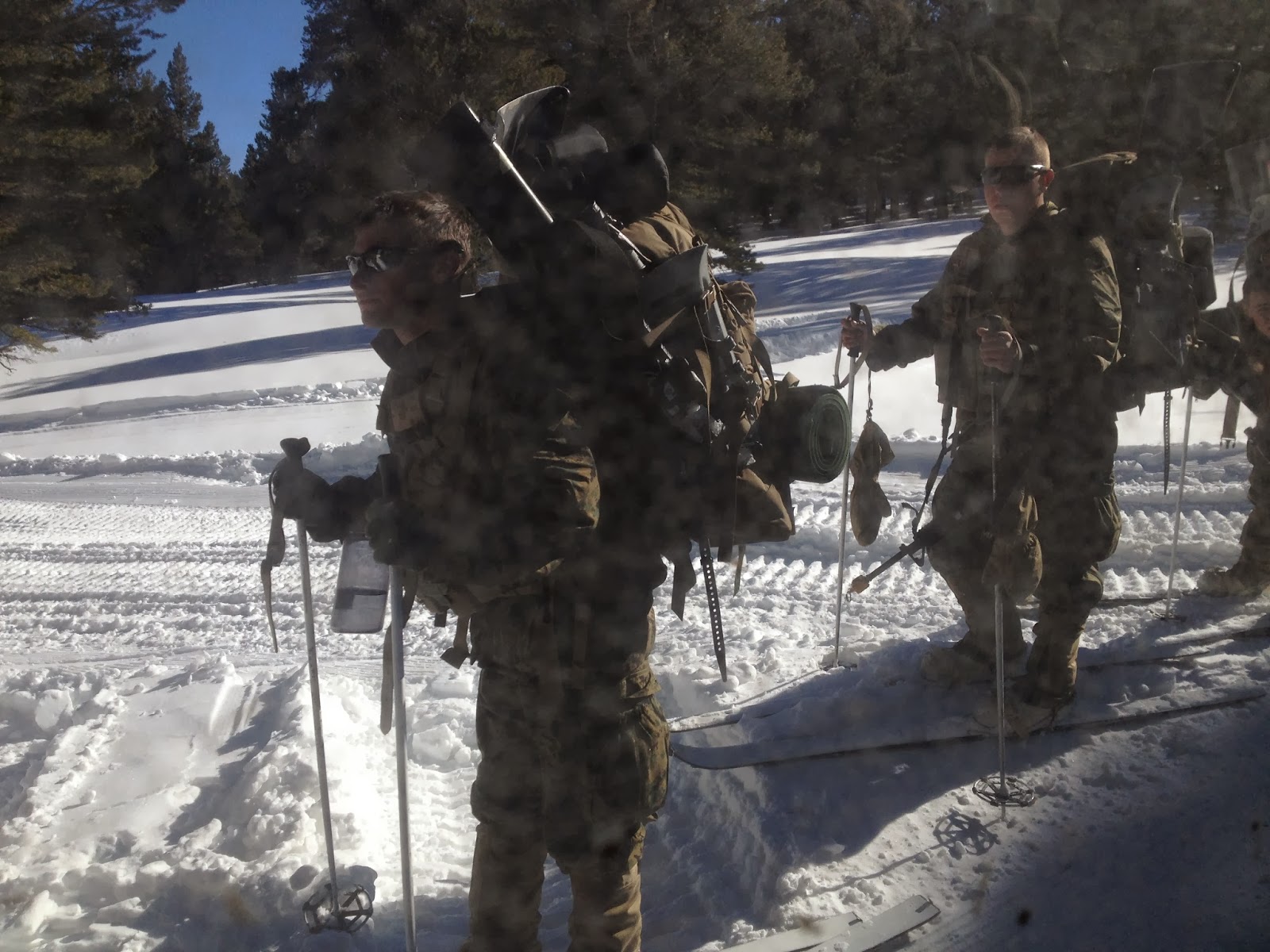 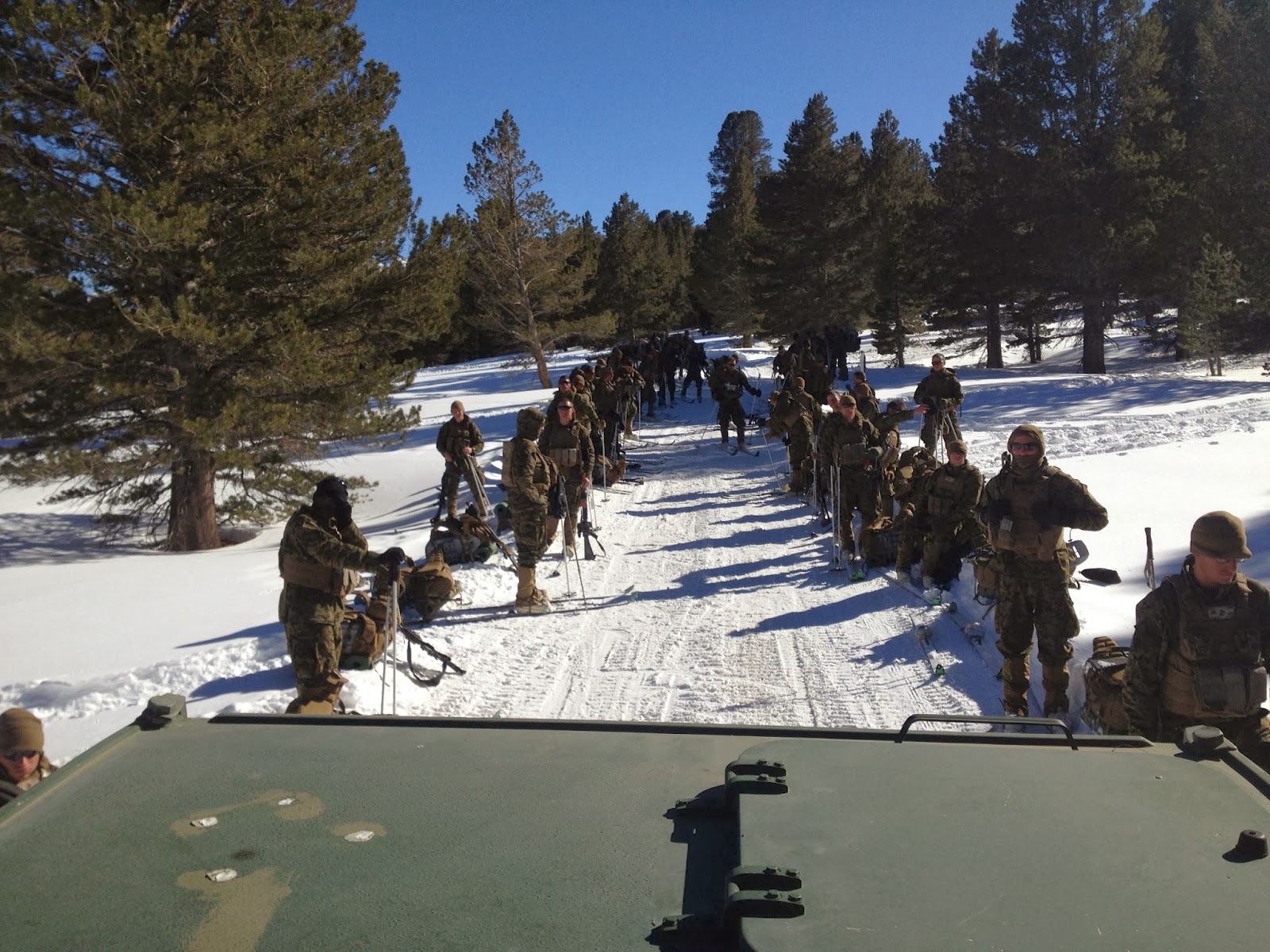 The guys were literally toting 90 pounds worth of gear.  I wasn’t sure whether to be impressed or horrified.  But it was clear that if we could shave some weight off their feet – which didn’t seem hard to do, since the Bunny Boots are as heavy as they are Goofy (or is that Mickey Mousey?)  -we’d be doing these guys a big favor.

After hanging out up in the hills for a couple of hours (where, incidentally, my toes got pretty cold in the Sportiva mountaineering boots) 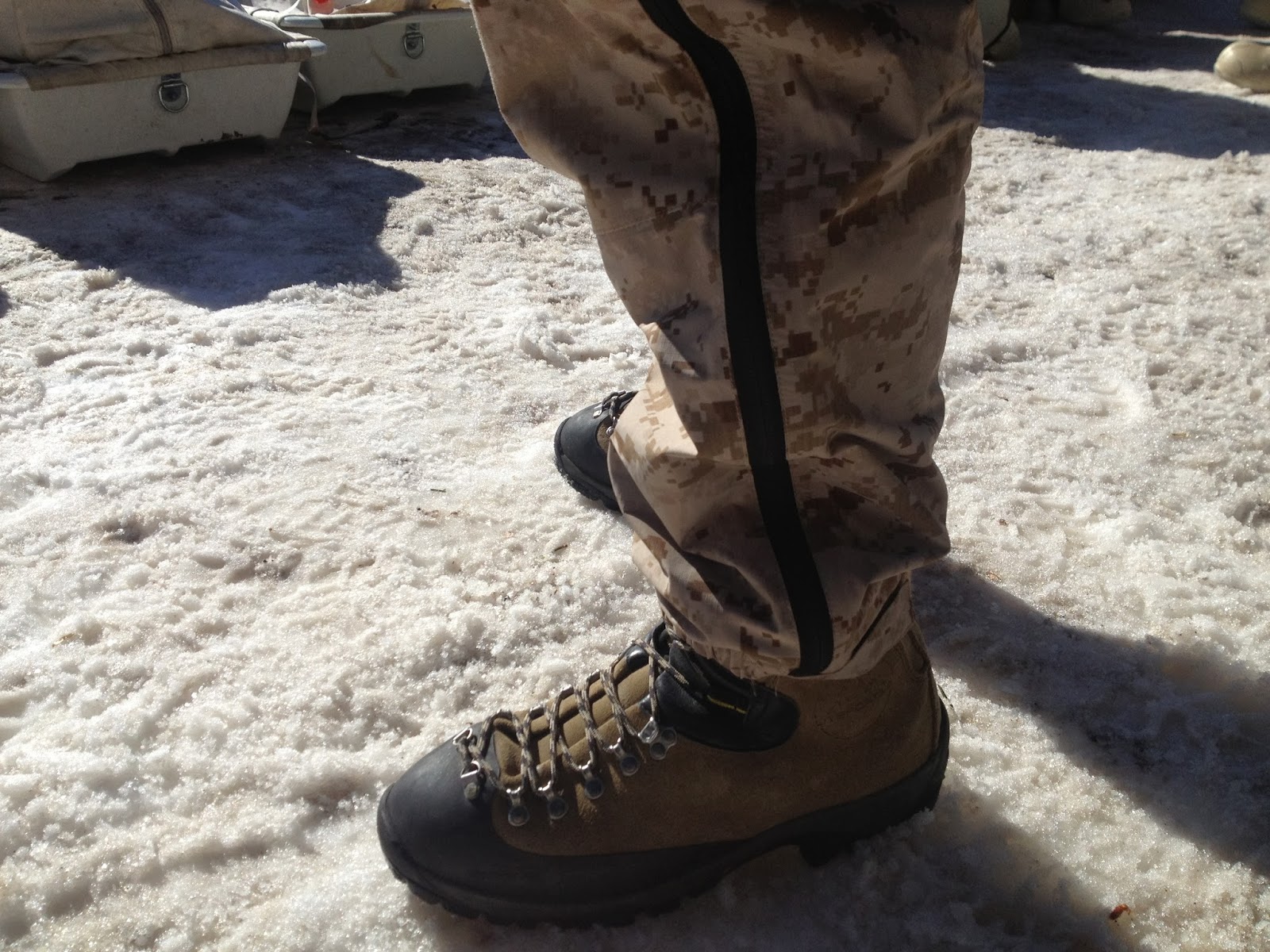 we headed back down the hill.  On the way the call came in on the radio that there was a problem; a soldier was down.  “What’s the problem?”  barked into his radio.  “Charly Joe Infantryman fell and broke his back”  My eyes got a bit wide at that, and then even more so when the officer guy pretty much just brushed it off and said “Well, deal with it!”  Wow, really?  A broken back, and “just deal with it?” Ok, I guess we are in the military now.   Ah well, head back down, it's cocktail hour! 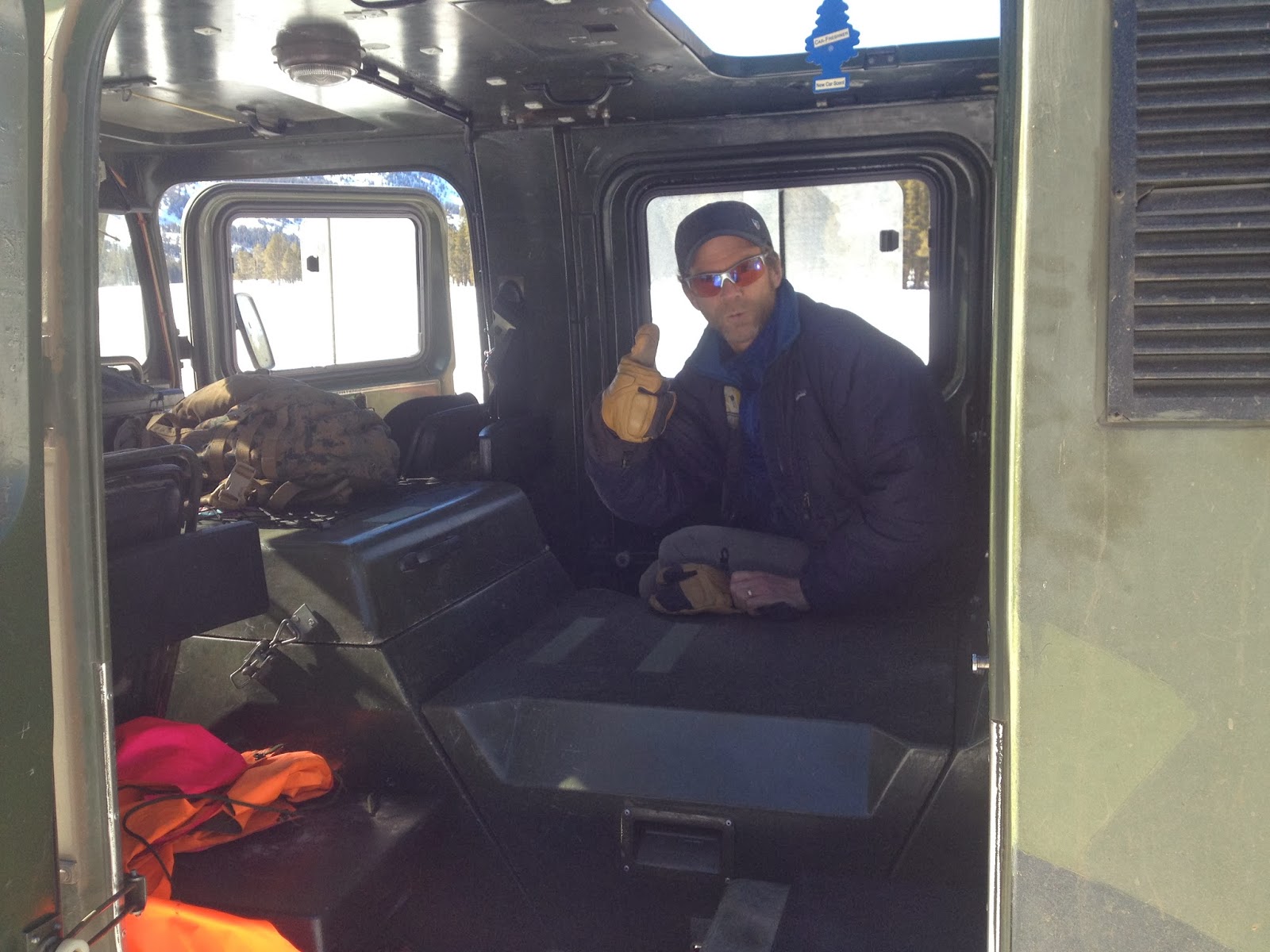 In the year since we have worked with a good factory partner and Gore, 3M (thinsulate), and Vibram to design and develop a boot that we think should address the needs of the recruits.  Eventually – because of the Berry Amendment – they will need to be made in the , but for now we are doing a run of test samples in .  Winter is unfortunately nearly half over,  and “winter” has not really even come to the Sierras yet, but hopefully there will be at least some opportunity for the recruits to get some cold feet.  And we’ll see how the boots go.  And hope that Sergeant Nelson likes ‘em!