The Selway the Hard Way

Ever since the River of Return packraft trip last year that I did with Tom McFarlane I've been keen to do another packraft trip, especially since I bought a non-cheap packraft this spring and it's been sitting unused ever since!  My enthusiasm for packrafting had piqued brother Paul's interest, and we had identified mid-August as a good time.  Then we found that experienced packrafter, pro photographer, and all around adventurer/good guy Jim Harris was keen for a trip that he'd had his eye on:  hiking into the Selway.

The Selway is nearly the Holy Grail of river trips; during the spring runoff (the only time it's typically raftable) only 62 private permits are issued to the lucky few of the thousands who sign up for the annual lottery, and invariably every year some of those trips get cancelled because the flow comes up too high during that window (and it's notorious for high water carnage, so canceling is sometimes the wise move).  But the permit season ends July 31, and if you have a craft that floats higher than a raft (ie a ducky, packraft, or small raft) you can sneak onto the river before the flow plunges to near-zero.  This past winter's snowpack was unusually good in those parts, so the river's been flowing about 30% higher than it typically does this time of year, so the window continued to remain open.

This packrafting trip was a little outside the packrafting norm, because it's very well known that one can drive to the Selway put in (in fact, most people probably don't even know that you can hike into the put in!) so on one hand the excellent opportunity that packrafts represent to be able to carry our vessels was somewhat moot, but we felt like it'd be fun to tromp up, over, and through the mountains first before heading down the river.   And if that weren't enough, the trail that was the most logical didn't really get up high enough into the Bitterroots - just up one valley to a pass then down another valley - so we decided to head straight up into the mountains and then stay above alpine, moving cross country for a few miles before dropping down the pass.  Seemed like a good idea at the time, and it turned out to indeed be a good idea.

Thus  Jim, Paul, Jim's friend pro skier/firefighter Kalen Thorien and I found ourselves at a trailhead (with a shuttle driver who thought we were nuts...or maybe stupid.....the line is very thin) ready to grind up nearly 4000 feet to the top of 10,000 foot Trapper Peak with a week's worth of food and our boats....and feeling very far from paddleable water. 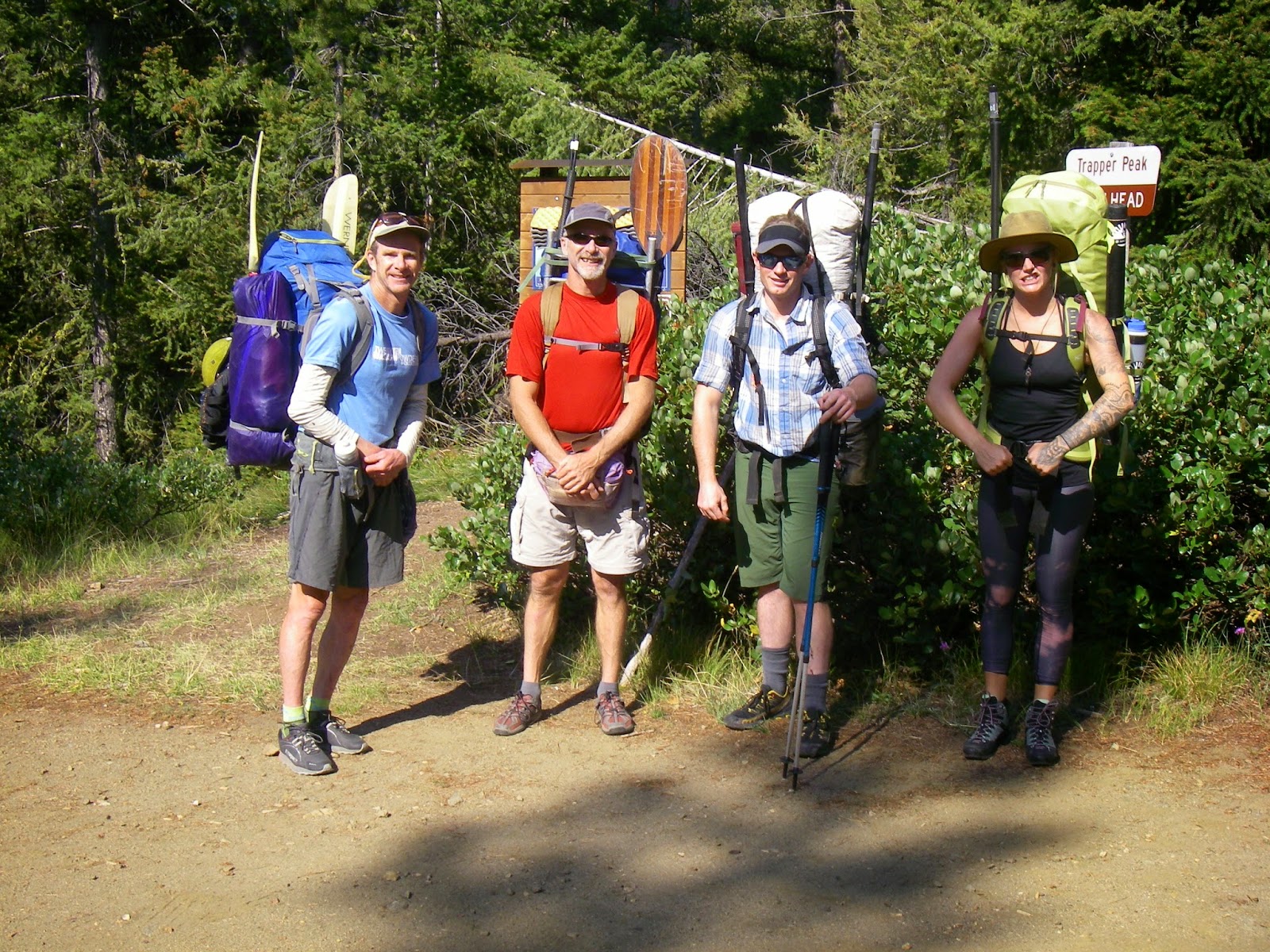 But we cheerily marched upwards, and soon enough got the excellent bird's eye view of the mighty Bitterroots: 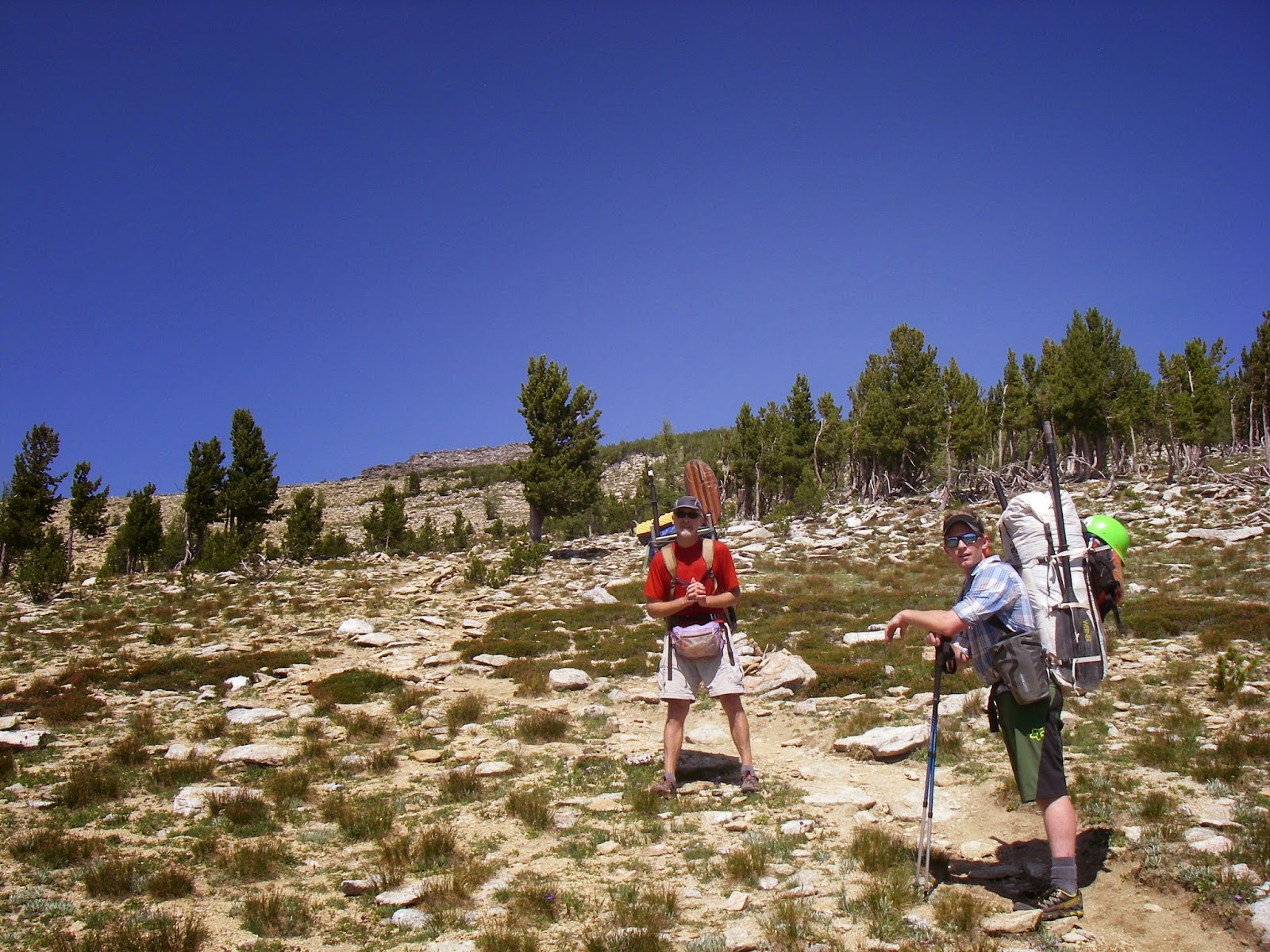 I realized that adding 40 or 50 pounds to legs that are accustomed to 160 pounds manifested itself in a far slower pace than trail running, but ever-so steadily we made it to the top:
On top we were a little surprised to see a few other folks who had backpacked in to some nearby lakes and were doing a summit day.  One of our fellow summitteers asked me "Did you see the deer?"  huh?  uh, maybe.  There are tons of deer.  "It was peeing!"  Really, do tell.  "We got a picture of it peeing"  Gosh, that's um, scintillating.  Can't wait to see the pics. And I am definitely outta here, to flee my fellow mankind and head into the wilderness for a week. 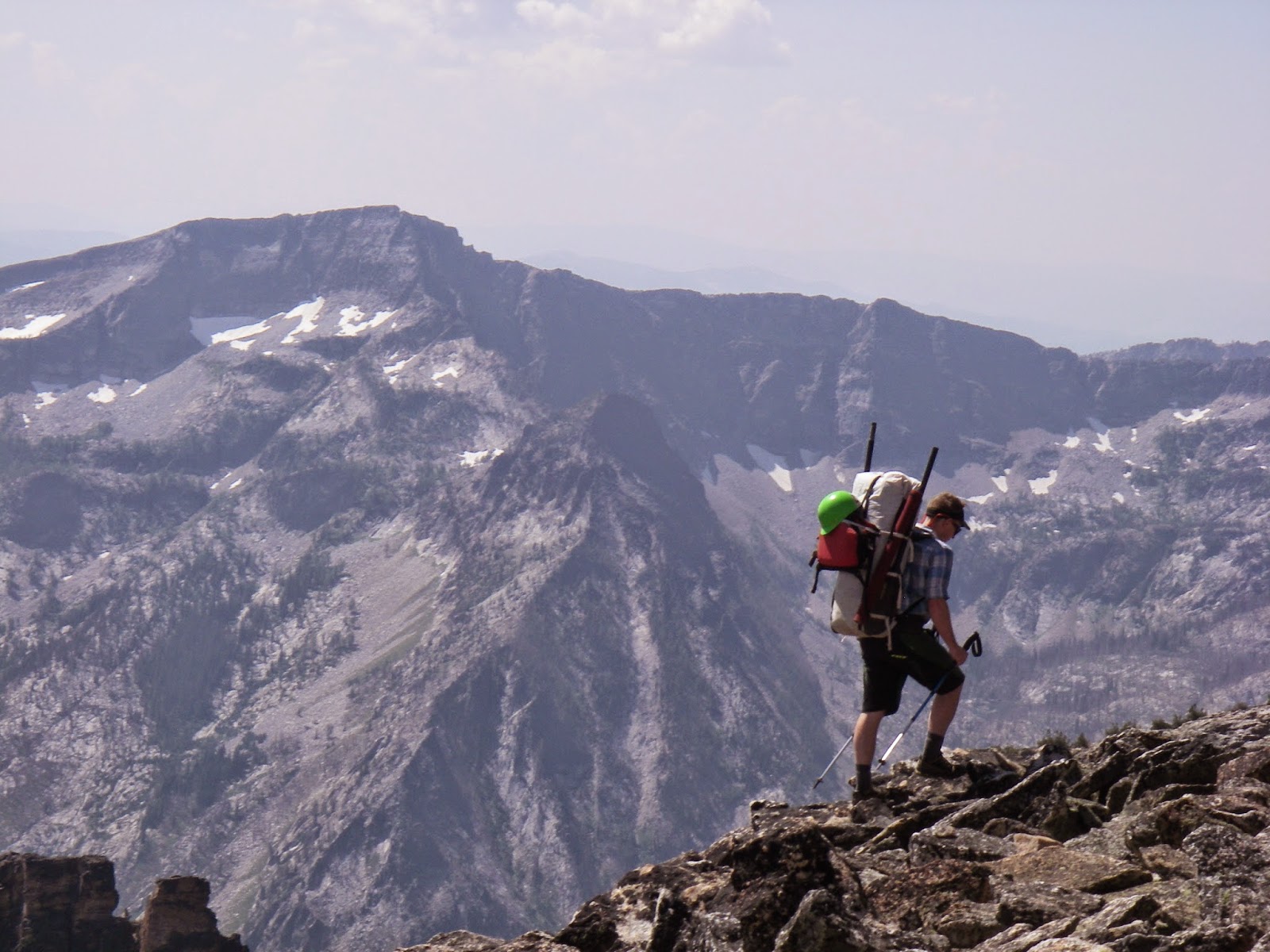 The Google had indicated that it was pretty straightforward ridge and basin-running west off Trapper Peak, but what The Google hasn't quite perfected is showing the sizes of the rocks in the talus fields. 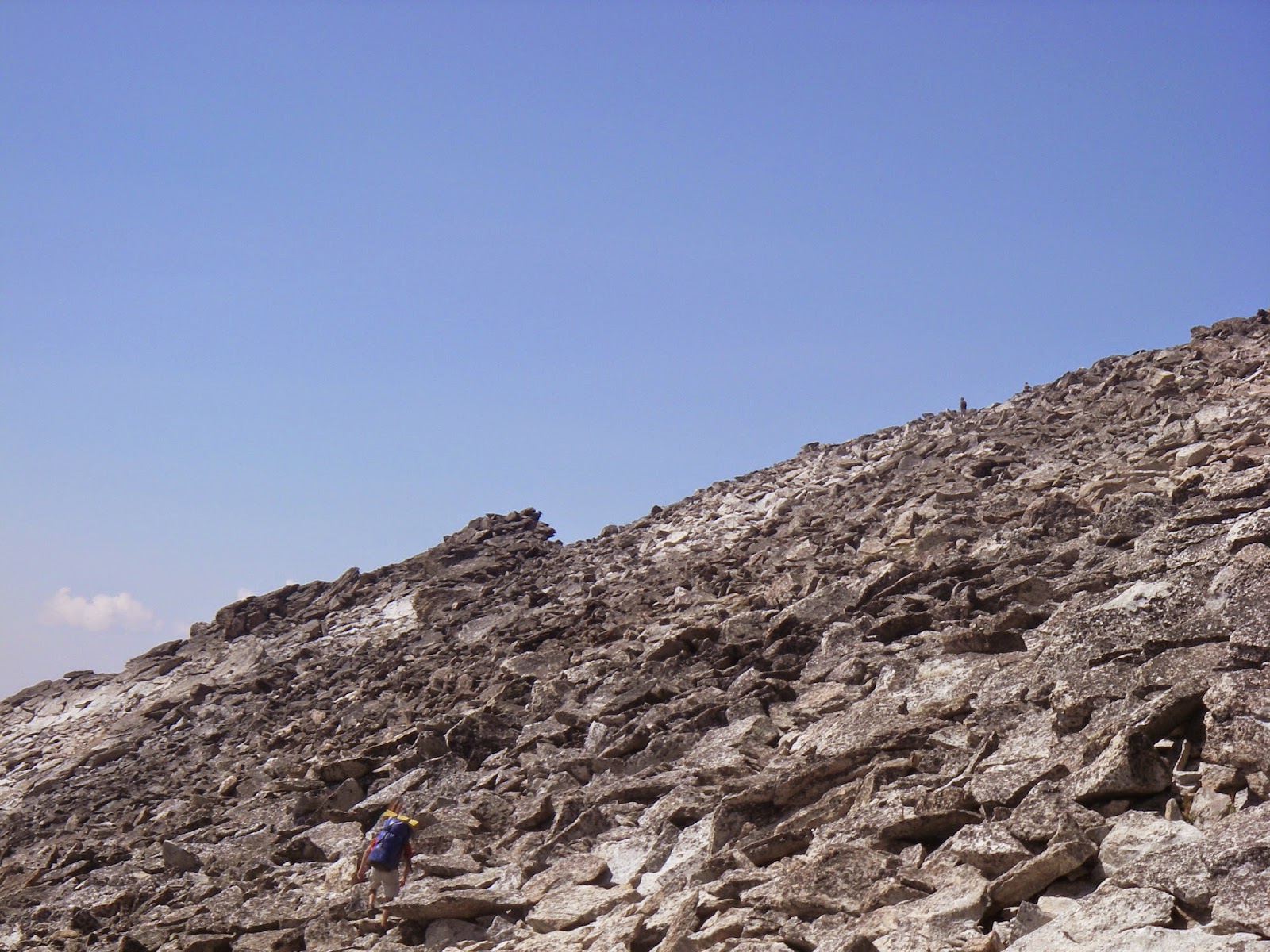 It was pretty challenging going, and memories of punching a bone-deep hole in my shin by a rock flipping up in the Sierras on similar terrain some years ago kept me moving pretty carefully.
But the views were great: 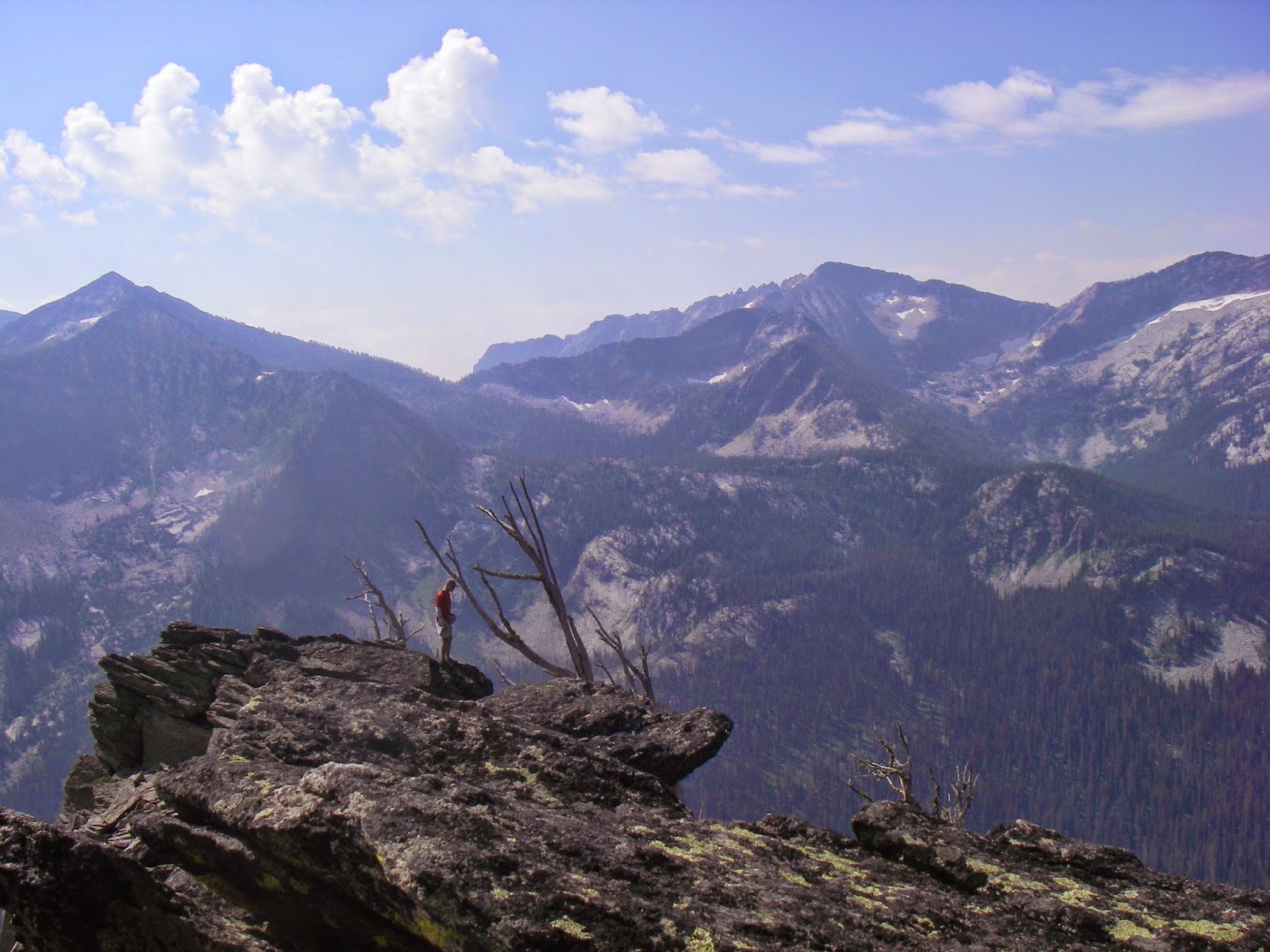 we were in no hurry, the weather was fine, and we made it to a beautiful lake well before the sun set.


The next day we kept moving west up high with more talus-hopping up and over small ridges, and finally we met the trail at Boulder Pass, which felt like a veritable freeway, even though it was probably the least-used trail I've been on in a long time with grass growing up in it and tons of downed trees that kept our scrambling legs from getting too monotonous tromping down the trail.
After a day and a half of trundling down the long valley we finally ended at the river, where we met Earl, the friendly volunteer at the ranger station who not only greeted us with a booming "Welcome to Paradise!" (the put in is called "Paradise") but also was willing to part with four precious backcountry Coors: 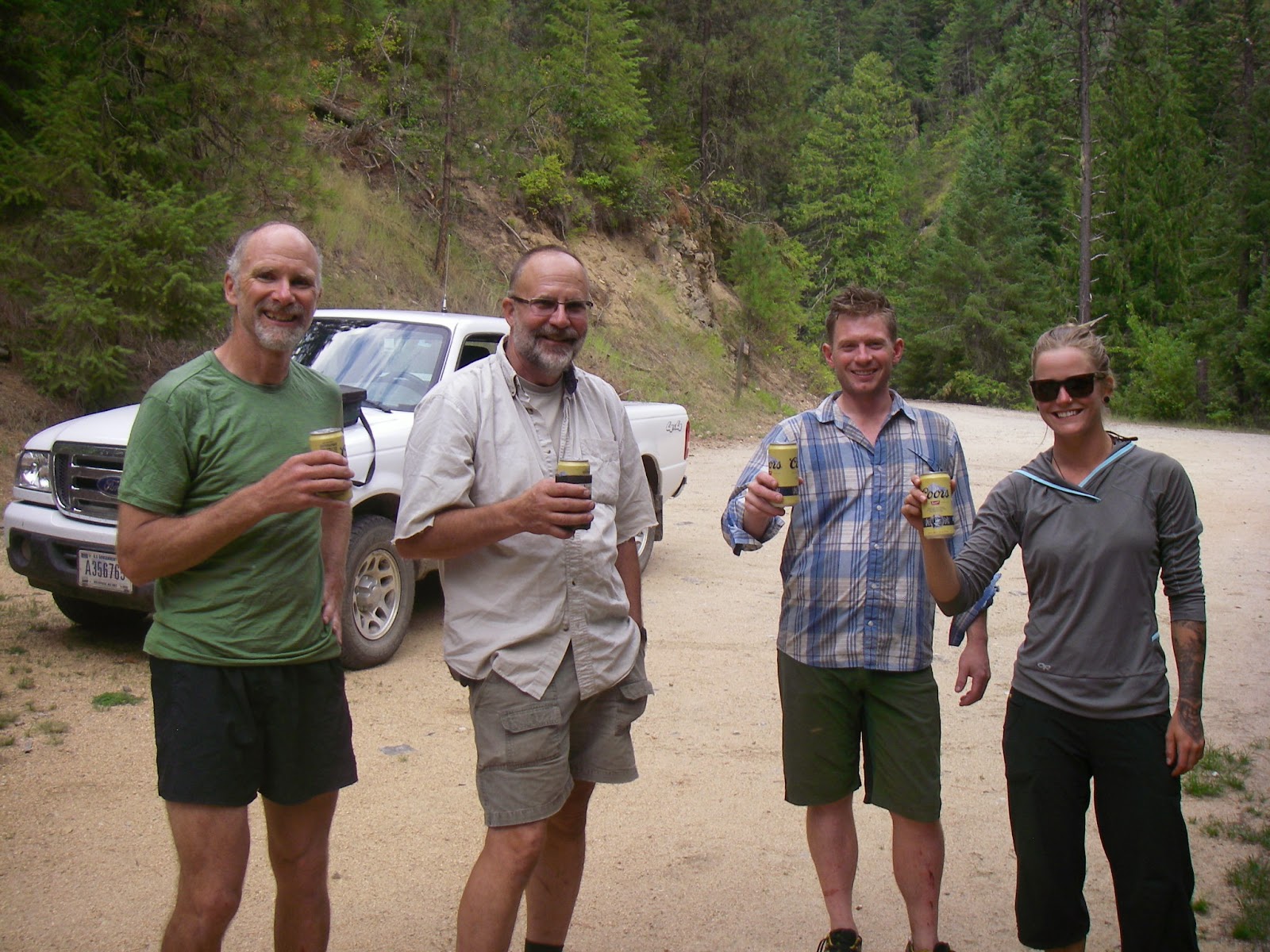 We were surprised to see the famously-clear Selway running dark:
and Earl informed us that there had been a ferocious thunderstorm recently that had made the recently-fired hillsides slough down and across the road into the river, so as it turns out our hike in was the only way to access the river after all!  And our night at the put in we got a taste of said thunderstorms:  it poured.  Jim happened to put up his tent right in the low spot of the parking area and got a bit flooded, I took refuge in the doorway of the outhouse: 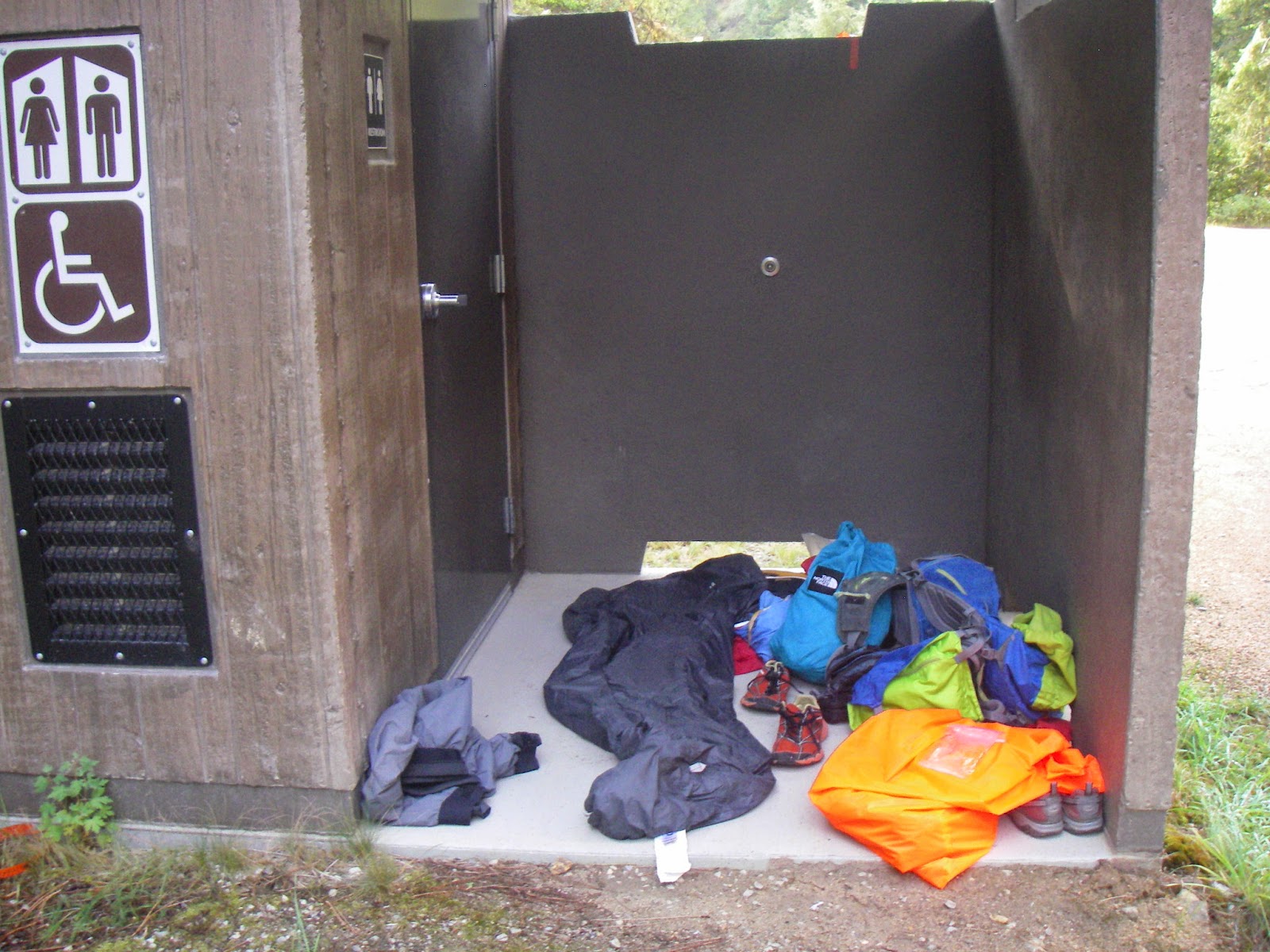 Kalen got hit by a rock dislodged on the hillside by the rain:
and I won't soon forget the image of Brother Paul abandoning his lean to and being silhouetted by lightning as he sprinted through the deluge for the other shitter's doorway!

But of course the thunderstorm blew itself out and the next morning we were drying out and ready to put on.  Our timing seemed perfect; the local rangers had closed the river due to fires downstream, but had taken down the sign earlier the day that we had arrived: 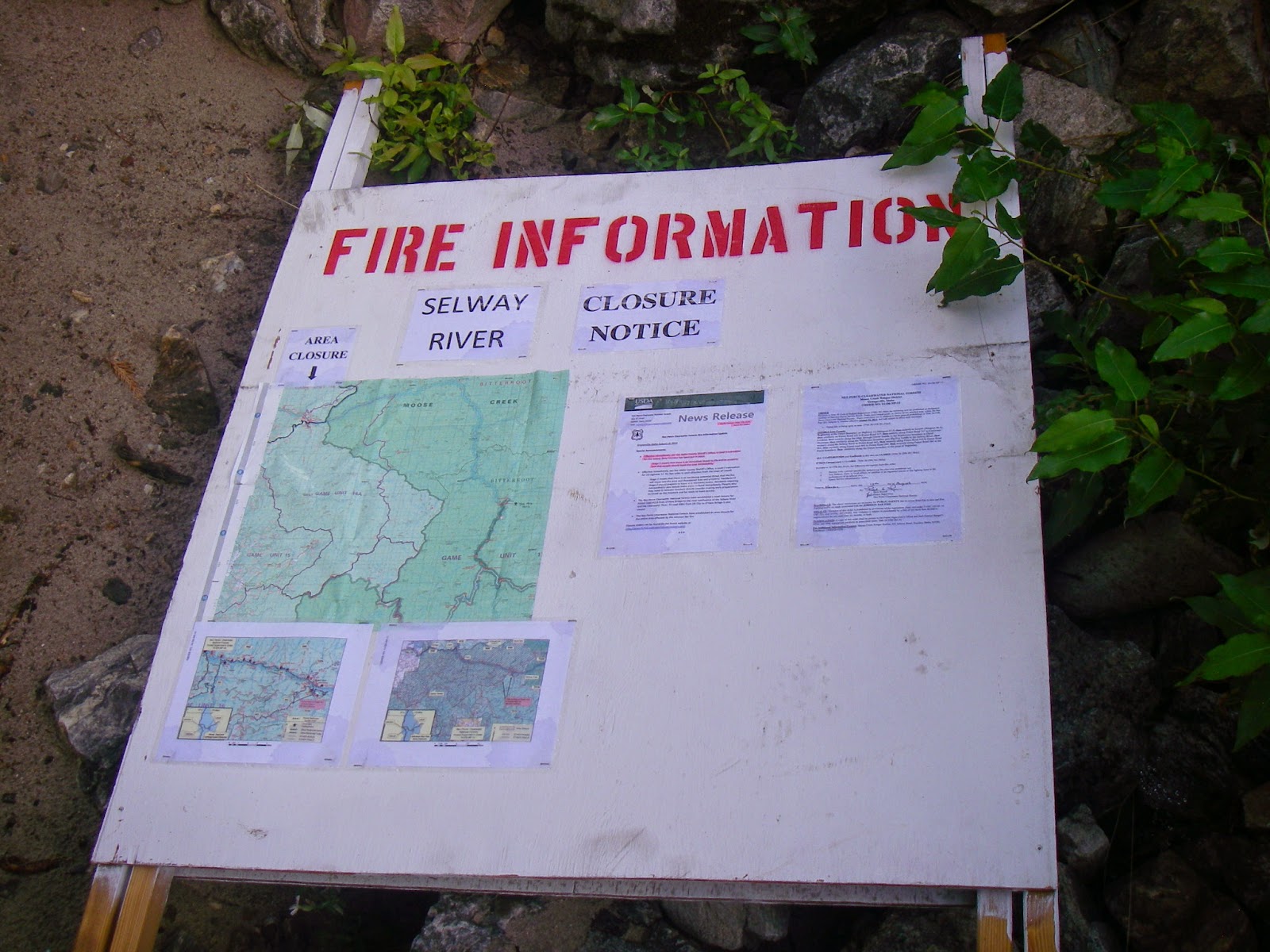 but Earl did tell us that the fire we knew had been going near the takeout was still in full force and the possibility existed that our shuttle driver would not be able to get in to the takeout.  Ah well, not much to do besides hop in the boats and merrily bob downstream.
Last year Tom and I talked about the concept of bringing someone who has little/no experience on whitewater down a class 3-3+ run in a packraft, and thought that someone who had little inherent fear, was a strong athlete, could follow leads well, pay attention and learn quickly, and recognize the value of "when in doubt, Give'er!"  would probably be ok.  Kalen was a good testpiece and she passed with flying colors; she was all of those things and more, to the point where Paul and I thought "geez, here we are with all these years of running rivers and thinking we are all burly, and she just comes in and nails it no problem as a total beginner!" 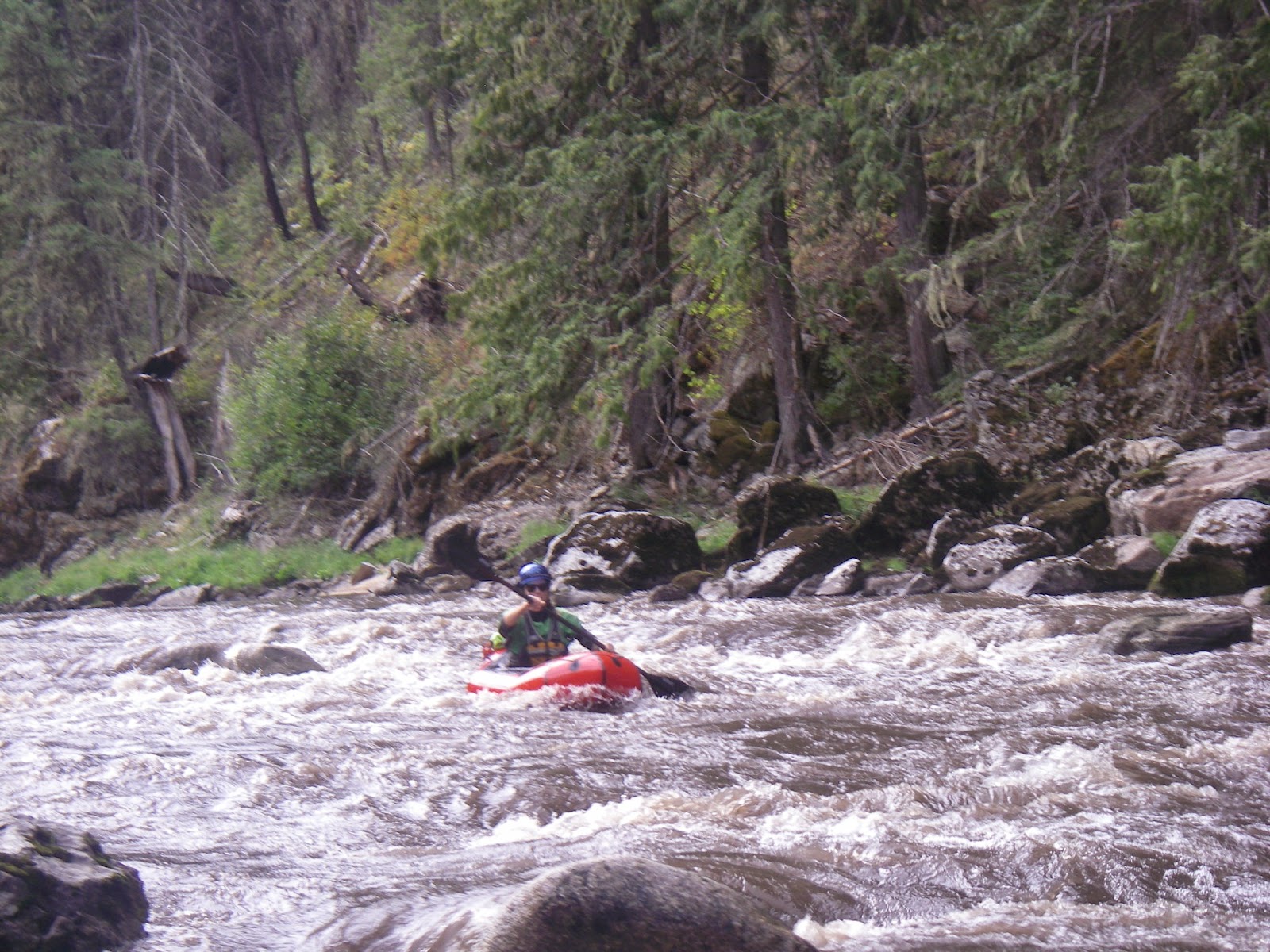 It was a pleasure watching her paddle her little craft, and after seeing her feet after a few days of hiking without complaint I knew she was tough:
So it was nice to get off our feet and kick back in the boats.  My new Alpacka Yak with the bigger-butt stern was not only more forgiving (ie less prone to back-endering) than the original but it was faster as well, and the clever new spray skirt system is - as anticipated  - a huge improvement over the velcro-on-over-the-pfd skirt. 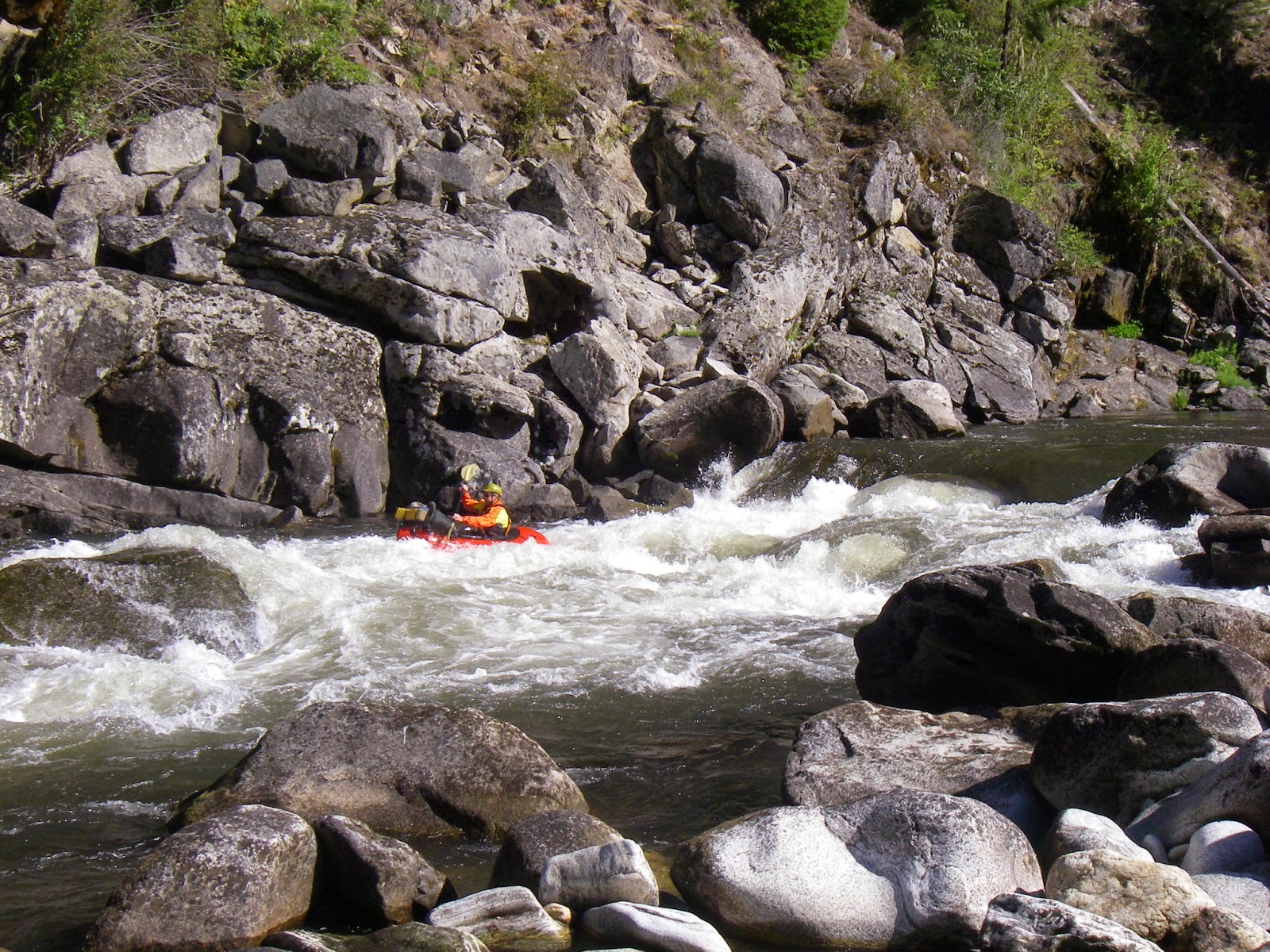 I feel pretty confident now that boat can run class 5 stuff; at least, lower-volume class 5 (driving home along the North Fork Payette it was difficult to imagine the Yak shredding the meat of that).
Our second day on the river was a veritable wildlife bonanza:  we awoke to see a baldy soaring upstream off to another day at work and shortly followed by a golden eagle, a mink blasted through our camp, three elk came down to the river for a drink, an otter bobbed around checking us out, and we saw not one, not two, not even three, but five black bears!  We thought that they typically had a pretty big range, but we saw all of these over the course of an hour or two of floating.
As expected, we bumped a bit on our way down to Moose Creek, where we met a handful of good ol' boys who had just flown in to the airstrip there for a fishing trip and were a bit distraught because not only was the river muddy enough to blind the fish but the fires were keeping their horse packer from making it in with their extra beer (they only had a few cases).   We met another local volunteer Ranger Rick who informed us that the situation downstream had not improved; the takeout road was still closed.  But as we spoke the rain fell steadily and we hoped that this would help our cause, though it had also rained up higher and the fires were still smoldering: 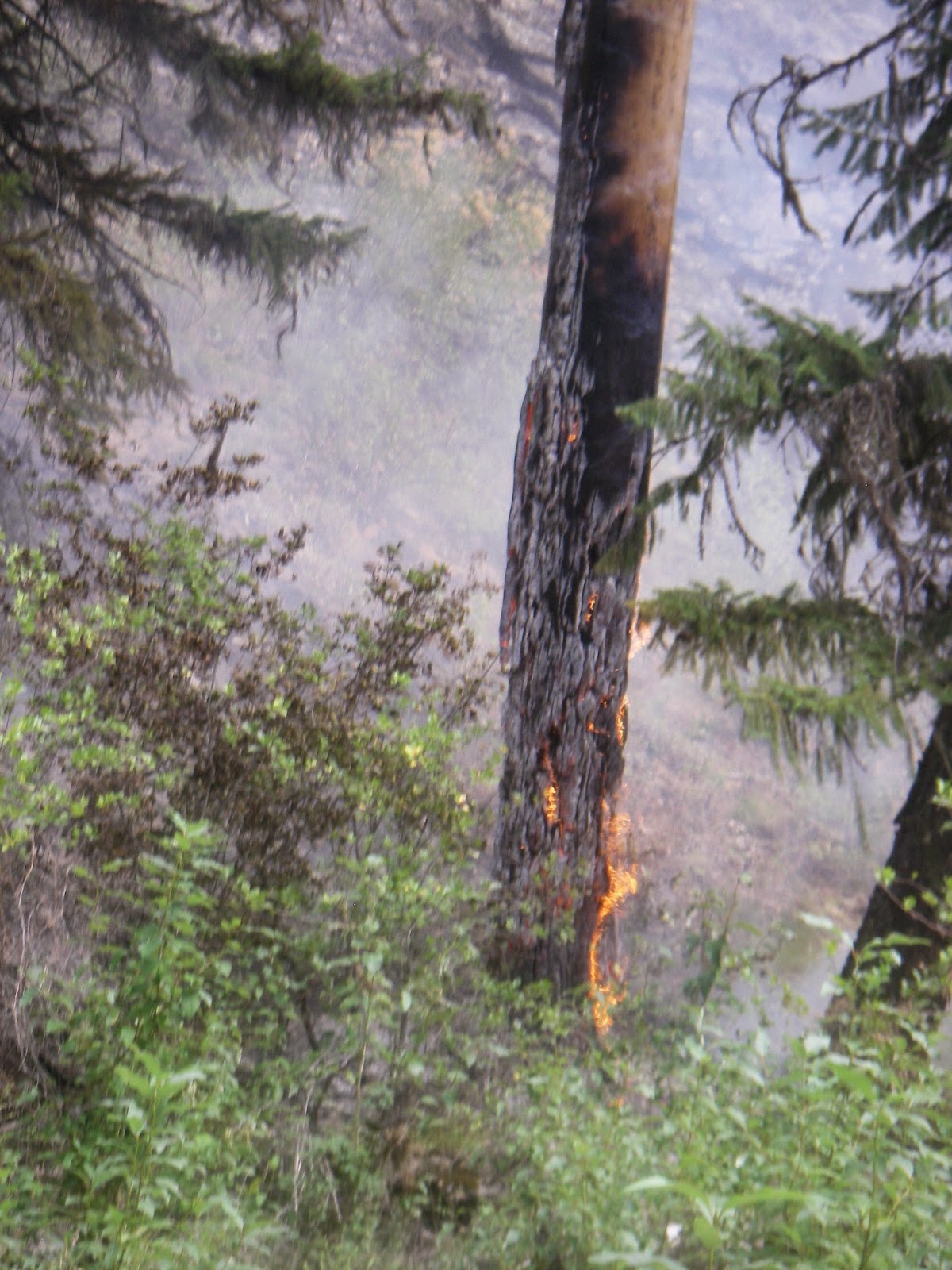 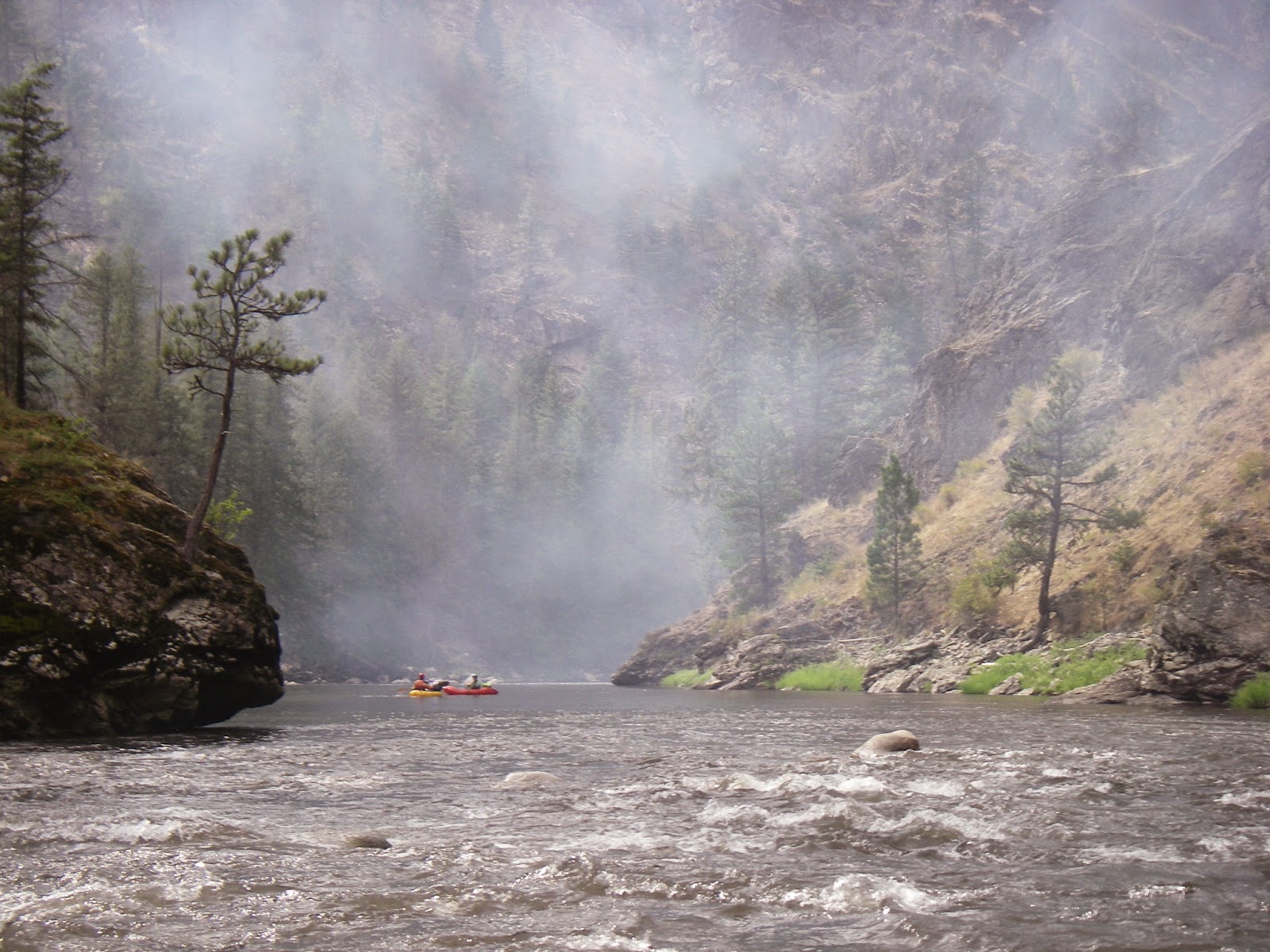 Moose Creek supplies the infamous "Moose Juice"  that comes in and doubles the flow as the Selway makes an abrupt turn to the west, which not only funnels the Pacific storms coming in creating an even deeper green Northwest feel:
but also the geology seems to change a bit and thus creates some bigger rapids.  Double Drop, Wa Puts, Ladle, and Little Niagra are all the most notoriously-challenging rapids on the river and they come one right after another, which adds to the spring carnage fest.
For us, however, it was just bob and weave through fun boulder-hoppy class 3's and the occasional small pourover. 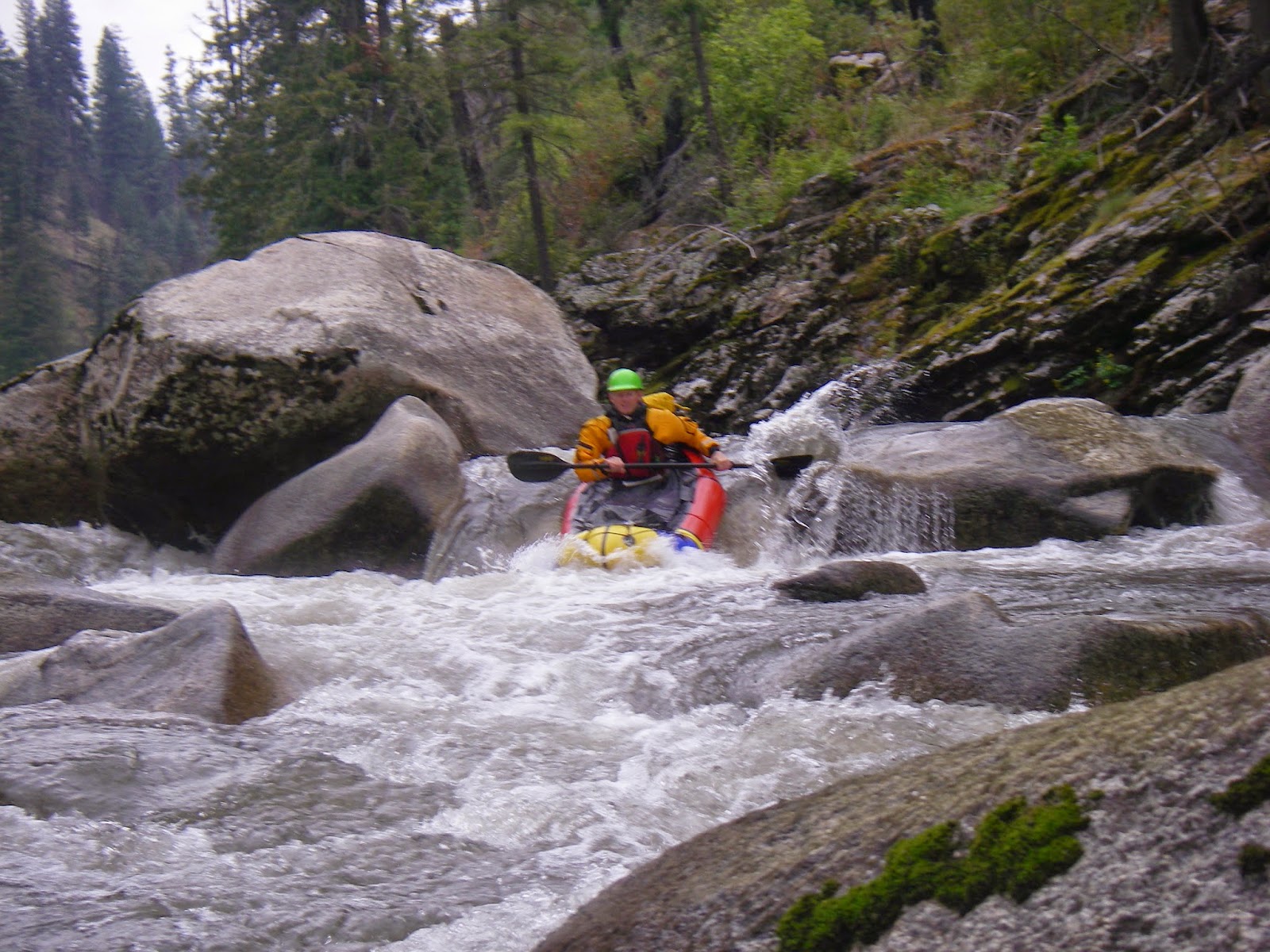 Our last camp was appropriately at "Jim's Creek"; a fitting end to Jim's cool idea.  We moseyed on down the final morning not knowing if the car would be there, sniffing as we went for the smell of smoke.  But sure enough it seemed the rain from two days' prior had snuffed out most of the fire and sure enough our car was ready for us at the Meadow Creek takeout.  After a final dip in the cleansing waters of the mighty Selway we headed for home, dropping Kalen off at her parents' place in McCall, where we were keen to be privy to her showing her dad her tattooed sleeve that he hadn't yet seen!  But alas, he was out, and the remaining three of us headed for home. I had to get back to help Ash feast on the August harvest! 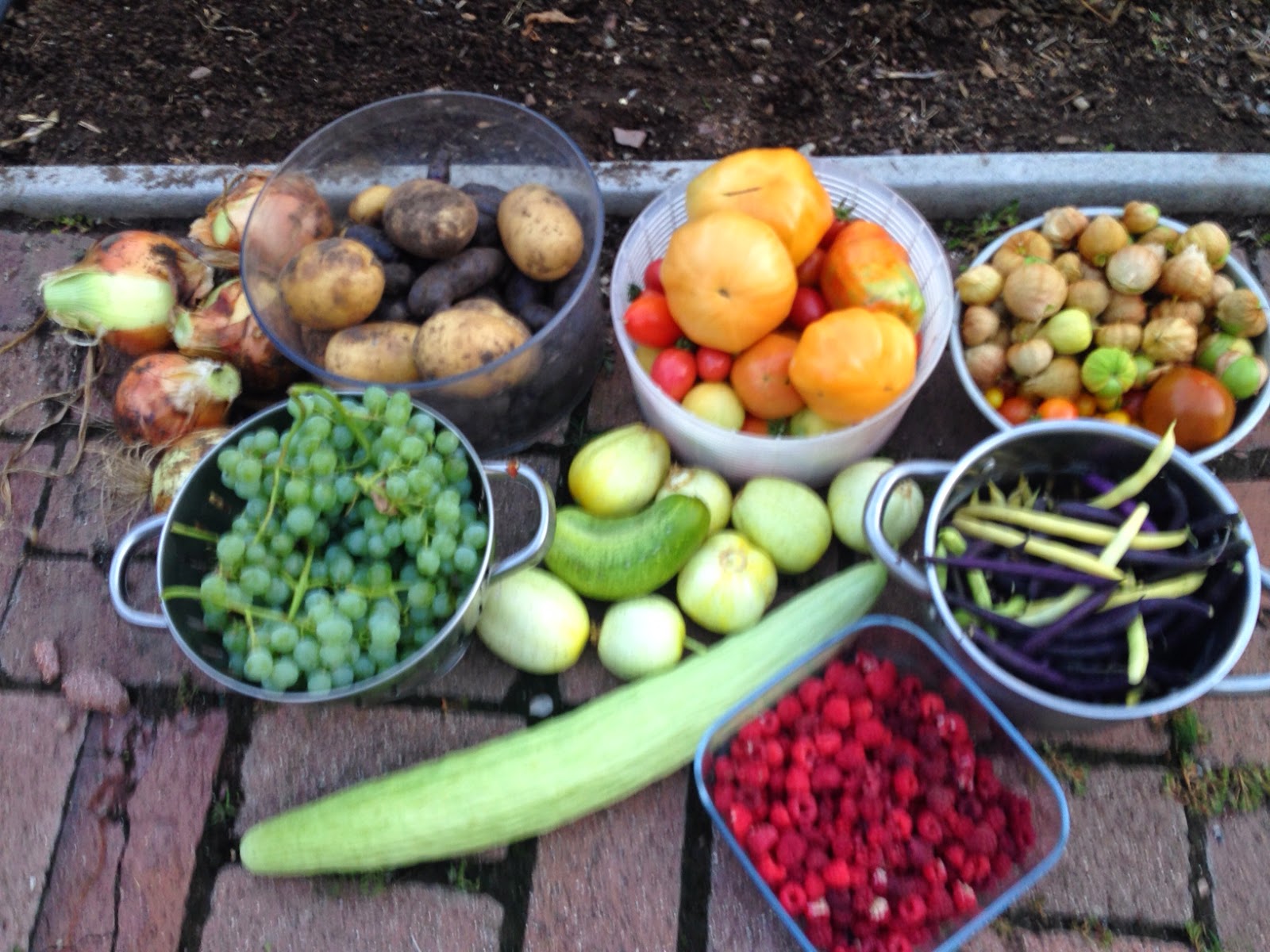 Thanks again to Jim for coming up with a great idea and to him, Paul and Kalen for being most excellent adventure pards on a stellar trip.

here are a slew of pretty remarkably good photos by Jim:
http://perpetualweekend.com/client/Selway/