A tale of river footwear

I’ve got the good fortune to have a Grand Canyon river trip coming up, which means that I get to regale my fellow rivermates with my rant about wearing sandals on a river trip (I’m not a fan).  I’ll share that rant later, but it reminds me of a good story of designing, building, developing, and producing some performance river footwear.

In the mid-90’s I had an opportunity to work for Patagonia to explore the concept of introducing shoes for them.  Obviously they had been killing it in apparel (and have continued to do so) but Yvon Chouinard – as a high-end outdoor adventurer across many diverse activities who, like a lot of high-end adventurers, puts a high value on footwear – wanted to do some shoes.  I was hired to explore the opportunities: the markets, the distribution matrix, the manufacturing options, incorporating shoes into Patagonia’s system, and of course, the products.  One that seemed obvious was whitewater-specific footwear.

Bob McDougall was Patagonia’s paddling product line manager, and Bob was a bit of a whitewater legend.
Throughout the 80’s and 90’s Bob had paddled all over the world doing first descents: 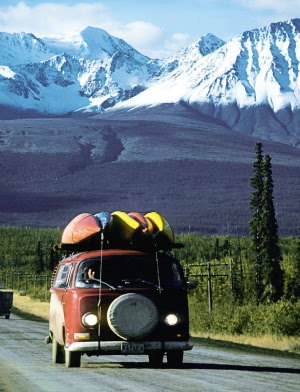 and won acclaim for having done the first “Vertical Mile” in a day by paddling the notorious North Fork of the Payette three times, a feat that has been since surpassed but is still way impressive.  In 1989 Bob was part of a first descent of the mighty Stikine river in SE Alaska (https://www.canoekayak.com/whitewater-kayak/30-years-of-the-stikine/)  a river that still is only done by the folks who are on the cutting edge of the sport in far more modern gear than was available to those intrepid early explorers, and  - as happens to us all at one time or another  -Bob took a pretty ferocious beating and swim.  The difference between that swim and most others was that a) Bob came very close to drowning, and later wrote a very provocative piece for a Patagonia catalog called, appropriately enough: “Drowning”, b) he was a thousand feet down in a vertical-walled gorge in a really remote part of the world without a kayak and only big water class 5/5+ raging below, and c) in the swim he lost a bootie.

Given that his kayak had flushed downstream and reeling from the severe beatdown that he had just barely lived through Bob was loathe to get back in the water, barefoot or not, so he did the only thing possible: he climbed out.   Fortunately, Bob’s other passion was climbing, so he had a leg up - as it were - over most other kayakers who typically only work with gravity, not against it.  However, the climb was over loose and awful rock covered with brush, of course he had no rope and no partner so he was free-soloing, and he did it with one bare foot.  He scratched, clawed, and jammed his way up for hours, sometimes doing desperate moves, but persevered successfully.  Once on the rim he had to traverse downstream through even thicker brush and then find a way to descend back to the river to hopefully reunite with his boat and his pards.  Suboptimal adventuring.

In short, he made it, but with no small amount of sufferage.  And suffice to say, Bob had plenty of time to appreciate the implications of kayaking hard rivers in remote places in loose-fitting, hot, uncomfortable, and slippery neoprene booties, which were the only things that people used then (and to be fair, a neoprene bootie was better than being barefoot!).  He vowed to create a new type of paddling footwear that would drain water, fit inside a kayak, stay on securely, and allow for scouting, portaging and….escaping.  As a climber his natural instinct was to start with a climbing shoe but make it less-tight fitting, drainable and not leather for quick drying, have a tread on the bottom, come up high enough to protect the ankle, and lace-on so that it wouldn’t come off in a ferocious swim.  Bob worked with Komito Boot in Colorado to make a proto, he used it, liked it, found some flaws, and….not much else happened.

Until I came along.  Yvon (YC) was also an old time kayaker (who had been part of the team that did the first descent of the notorious Box Canyon of the Clark’s Fork in northern Wyoming:  http://www.oregonkayaking.net/rivers/box/box.html )and he too thought that neoprene dive booties were wildly inappropriate and any new Patagonia footwear collection was going to include a version of Bob’s shoes, which was fine with me.  I ended up taking Bob’s tattered pair to a cobbler in Salt Lake City (Gary Mekan, who had a small shop in the Black Diamond complex) and for a week we worked together to create a prototype that took Bob’s concept and his (and my) thoughts for improvements, and came up with a good prototype: 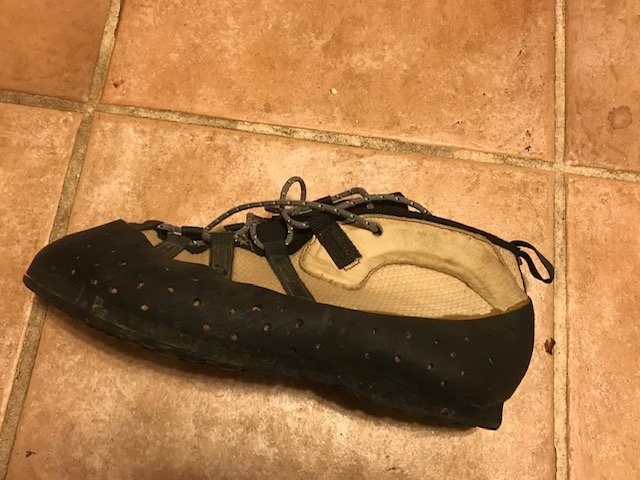 I sent this to my designer (iconic ex-Nike designer Steve McDonald, who had helped me get the job in the first place after meeting YC on a crag in the Tetons) and Steve took this ragged proto and gave it some life in a beautiful rendering, which unfortunately I no longer have.

In the meantime, I had done a bunch of nosing around the footwear industry and ultimately contacted One Sport, an Italian company that was the sort of parent company of Montrail (though they were involved in a painful divorce at that point).  I exchanged messages with them and asked if we could get together to meet at ISPO, the huge sporting trade show in Munich, and I hopped on a plane to Germany, armed with my prototype and Steve’s rendering.  I blasted straight from the airport to the show, went right to the booth, sat down with them for a coupla hours to tell them the story, show them the proto, and go over the rendering, and we had a deal.  The CFS was born.

Working with Italians was an eye opening experience for me.  As the president of the recently-divorced Montrail said to me:  “They are terrible about communicating, their prices are way too high, they take all of August off, they are always late, and they wonder why everyone moves production to China!”  And indeed they drove me crazy.  But boy they are great shoemakers, and after too-much time and much cajoling they finally delivered their prototype: 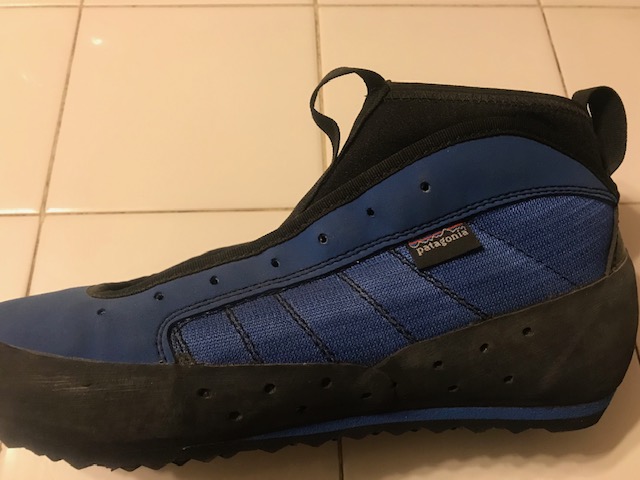 which was actually one of the few samples we made because it was so perfect we moved into production fairly quickly.

Since I was the catch-all Shoe Guy, I also had the opportunity to market the shoe, which was a fun learning experience for me.  Here's the page in the iconic Patagonia catalog, with me carrying a kayak in to the Headwaters of the Kern river high in the Sierras (this was well before I discovered 10lb pack rafts!) 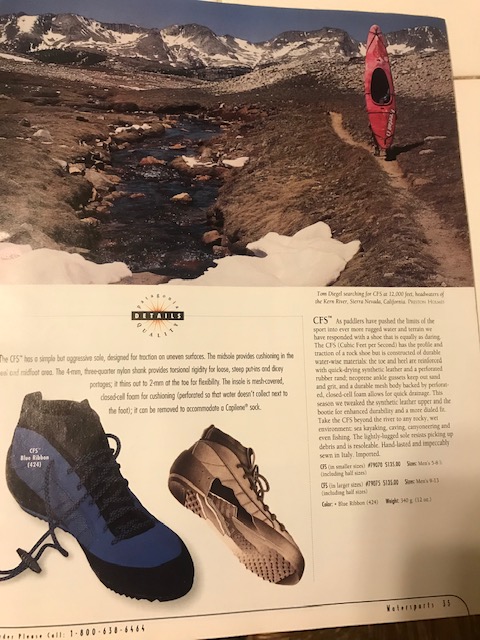 Despite the fact that the shoe retailed for $120  - a far cry from the $35 booties that most people were using – we only made something like a 30% margin (as opposed to the >50% margin that Patagonia was accustomed to), but at least the volumes were low!  But we had created the world’s first performance kayaking shoe that gave Patagonia some much-needed credibility in a challenging market.  And importantly, YC was quite pleased with it.

Ultimately, of course, the relationship with the Italians waned due to the aforementioned characteristics, and it was worrisome; we knew that Asian sourcing was the obvious choice, but at our low volumes no factory would even talk to us.  However, ultimately we did find a factory in Korea (in the shoemaking world, the “Italy of Asia”) and we designed a new shoe that built upon the basis of the CFS with some modifications based on what we’d learned from the CFS. 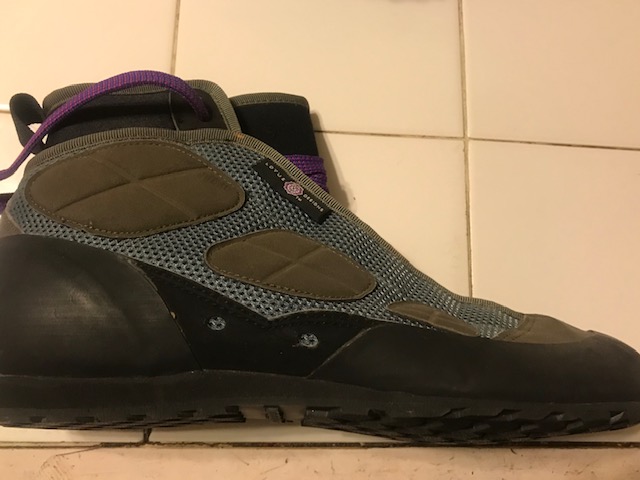 We called it the “Play Boot”, which was a bit of a misnomer because it was really designed for creeking and that was an unfortunate era of play boats (small kayaks to surf/play in holes) that were super painful to stuff your feet into, but it was a fun name nonetheless.  When I had told the Italians that the CFS rubber wasn't sticky enough they said "No problem; we can make it stickier.  But how will you deal with the $7 price increase?"  I blew a nut.  When I told the Koreans I needed sticky rubber they said "No problem!".....and that was that.  I knew I had found the right vendor.  And importantly, we got it to $99, which – along with the increasing awareness of the need for real footwear for kayaking and a few wannabe competitors coming out  -helped the volume, and the margins had improved as well.

Ultimately the shoe played itself out and went away, but not before I got a few pairs that I still use (and Ash is almost done with her last pair).  But if imitation is the sincerest form of flattery, Five Ten kept the idea alive for many years: 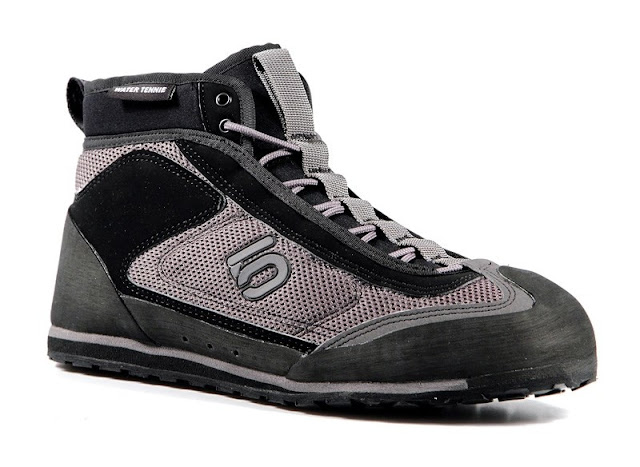 And these shoes paved the way for the likes of Astral to blend some of the geeky performance characteristics we conjured up with modern skate-inspired styling and make a real business of kayaking footwear: 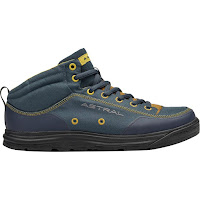 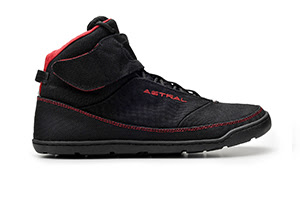 Lots of outdoor companies use taglines like “Born in the Mountains”, “Never Stop Exploring”, “Committed to the Core”, and “True to the Trail” to compel us buy their products that we hope were inspired by employees or at least sponsored athletes, and to be sure Patagonia’s heritage and inspiration still emanates from a guy who has done more than his share of suffering in awful weather on the sides of mountains and walls.   But it’s rare to have such a calamity as a near-death swim and desperate barefoot escape from a gorge in deepest darkest Alaska be the inspiration for an entire genre of footwear.  I’m glad Bob was as innovative as he was tough and that Patagonia was willing to breathe life into a niche-y product.

Yvon is also a passionate fisherman - far more so than kayaking - and he told me "all fishing boots are pieces of shit!  I want to do a good fishing boot."  We did make a couple of fishing boots, and the changes that we created in that industry was actually a bit more profound and personally more fulfilling than the kayak project was, even being a non-fisherman.  The story behind the fishing boots is different but also interesting, and I'll try to follow up soon with that story.