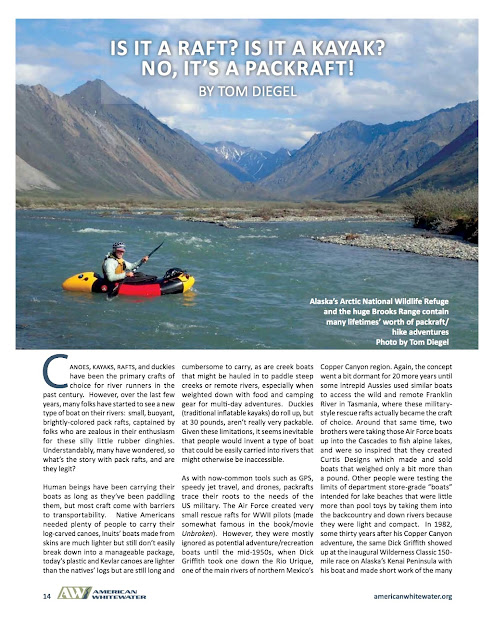 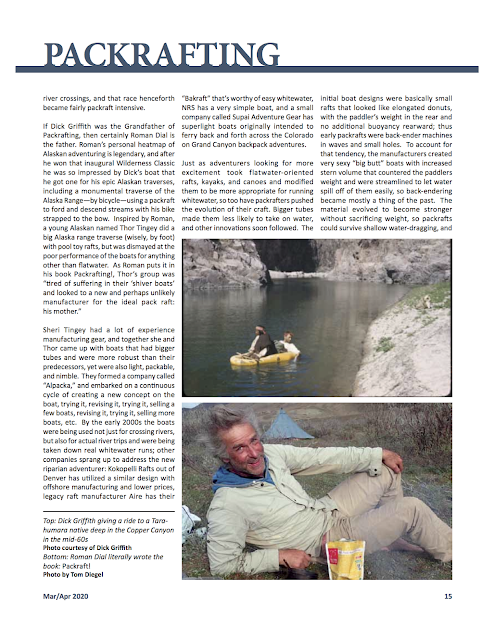 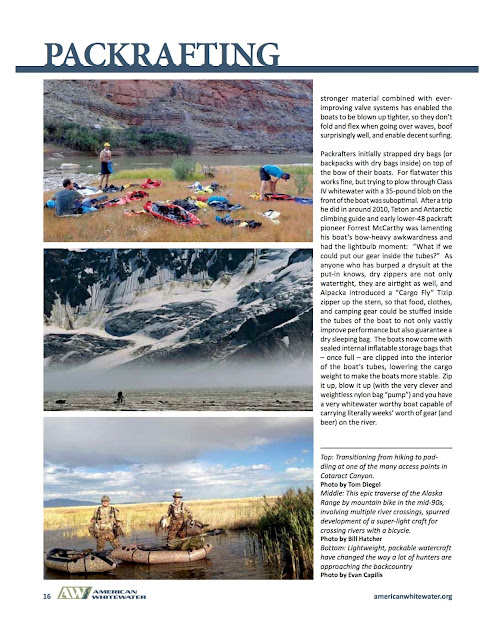 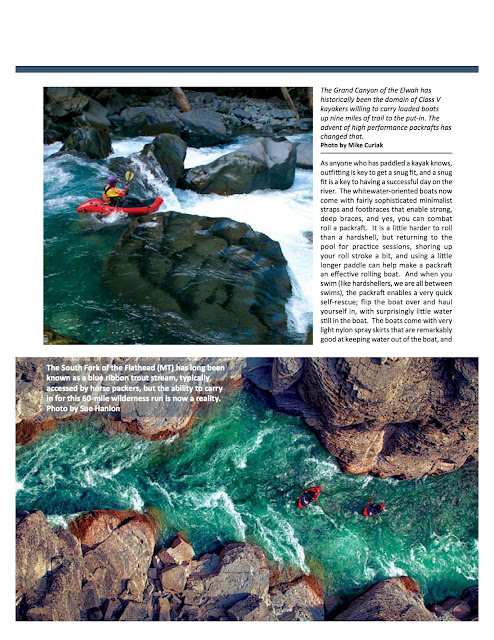 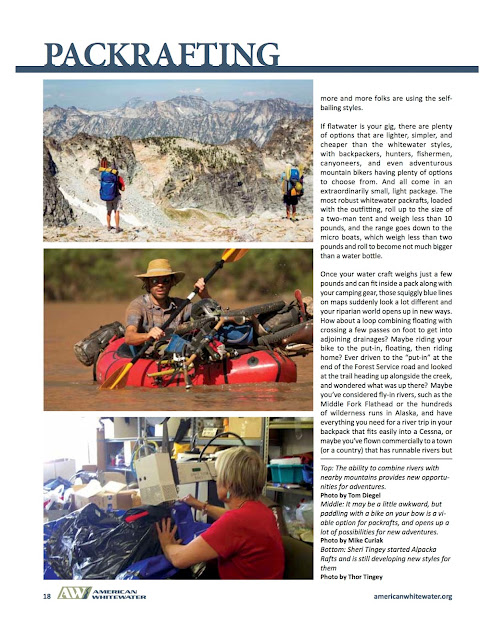 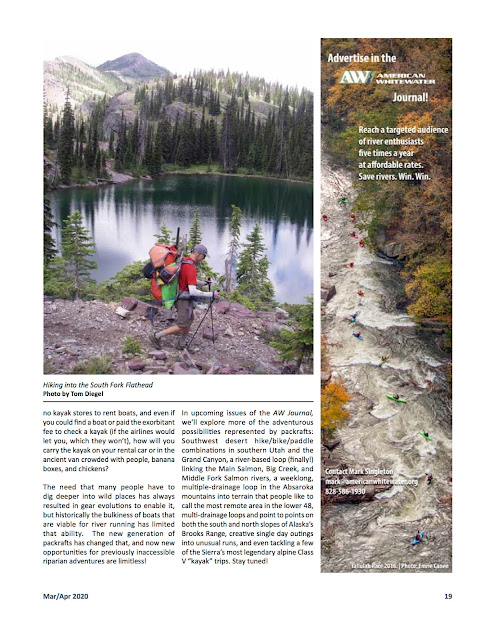 Thanks to Mike Curiak for his great pics, to Roman Dial for the historical pics, and to those two, Brad Micklejohn, the New England and Cincinnati Packrafting Teams, Brother Paul, Tom Mac, Drew/Zin, Team Durango, and other past and future packrafting pards!  Below is the text of the article.

Canoes, kayaks, rafts, and duckies have been the primary crafts of choice for river runners since people first started floating rivers.   However, over the last few years many folks have started to see a new type of boat on their rivers:  small, buoyant, brightly-colored pack rafts, captained by folks who are zealous in their enthusiasm for these silly little rubber dinghies.  So what’s the story with pack rafts, and are they legit?

Human beings have been carrying their boats as long as they’ve been paddling them, but all crafts come with a variety of issues associated with transportability.   Native Americans needed plenty of people to carry their log-carved canoes, Inuits’ boats made from skins are much lighter but still don’t easily break down into a manageable package, today’s plastic and Kevlar canoes are lighter than the natives’ logs but are still big and awkward to carry, as are creek boats that might be hauled in to paddle steep creeks or remote rivers, especially with food and camping gear added for multi-day adventures.  Duckies (traditional inflatable kayaks) do roll up, but at 30 pounds in a still-big package they aren’t really packable.  Given these limitations, it seems inevitable that people would find some way to be able to hike boats into rivers that might otherwise be inaccessible.

As with now-common tools such as GPS, speedy jet travel, and drones, packrafts trace their roots to the needs of the US military. The Air Force created very small rescue rafts for WWII pilots (made somewhat famous in the book/movie “Unbroken”).  However, they were mostly ignored as potential adventure/recreation boats until the mid ‘50’s when Dick Griffith took one down the Rio Urique, one of the main rivers of northern Mexico’s Copper Canyon region.  Again, the concept went a bit dormant for 20 more years until some intrepid Aussies used similar boats to access the wild and remote Franklin River in Tasmania, where they actually became the craft of choice. Around that same time two brothers were taking those Air Force boats up into the Cascades to fish alpine lakes, and were so inspired that they created Curtis Designs that made and sold boats that weighed only a bit more than a pound.   Other people were testing the limits of department store-grade “boats” intended for lake beaches that were little more than pool toys, but people were taking them into the backcountry and down rivers because they were light and compact.  In 1982, some thirty years after his Copper Canyon adventure, the same Dick Griffiths showed up at the inaugural Wilderness Classic 150 mile race on Alaska’s Kenai Peninsula with his boat and made short work of the many river crossings, and that race henceforth became fairly packraft intensive.

If Dick Griffiths was the Grandfather of Packrafting, then certainly Roman Dial is the father.  Roman’s personal heatmap of Alaskan adventuring is legendary, and after he won that inaugural Wilderness Classic he was so impressed by Dick’s boat that he got one for his epic Alaskan traverses, including a monumental traverse of the Alaska Range….by bicycle, using a packraft to ford and descend streams with his bike strapped to the bow.  Inspired by Roman, a young Alaskan named Thor Tingey did a big AK range traverse (wisely, by foot and pool toy rafts), but was dismayed at the poor performance of the boats for anything other than flatwater.  As Roman puts it in his book: “Packrafting!” Thor’s group was “tired of suffering in their ‘shiver boats’ and looked to a new and perhaps unlikely manufacturer for the ideal pack raft:  his mother.”

Sheri Tingey had a lot of experience manufacturing gear, and together she and Thor came up with boats that had bigger tubes and were more robust than the predecessors, yet were also light, packable, and nimble.  They formed a company called “Alpacka”, and embarked on a continuous cycle of creating a new concept on or for the boat, try it, revise it, try it, sell a few boats, revise them, try them, sell more boats, etc.  By the early 2000’s the boats were being used not just for crossing rivers, but also for actual river trips and were being taken down real whitewater runs, and other companies sprang up to address the new riparian adventurer: Kokopelli Rafts out of Denver has utilized a similar design with offshore manufacturing for better pricing, legacy raft manufacturer Aire has their “Bakraft” that’s easy whitewater worthy, NRS has a very simple boat, and a small company called Supai Adventure Gear has superlight boats originally intended to ferry back and forth across the Colorado on Grand Canyon backpack adventures.

Just as adventurers looking for more excitement took flatwater-oriented rafts, kayaks, and canoes and modified them to be more appropriate for running whitewater, so to have packrafts evolved.  Creating bigger tubes made them less-likely to take on water, and other innovations soon followed.  The initial boat designs were basically small rafts that looked like elongated donuts, and with the paddler’s weight in the rear and no additional buoyancy rearward, packrafts were backender machines in waves and small holes.  To account for that the manufacturers created very sexy “big butt” boats with increased stern volume that countered the paddlers weight and were streamlined to let water spill off of them easily, so backendering became mostly a thing of the past.  The material evolved to become stronger without sacrificing weight, so they could survive shallow water-dragging, and stronger material combined with ever-improving valve systems has enabled the boats to be blown up tighter , so they don’t fold and flex when going over waves, boof surprisingly easily, and enable decent surfing.

Packrafters initially strapped dry bags (or backpacks with dry bags inside) on top of  the bow of their boats.  For flatwater this works fine, but trying to plow through class 4 whitewater with a 35 pound blob on the front was suboptimal.  After trip he did in around 2010, Teton and Antarctic climbing guide and early lower-48 packraft pioneer Forrest McCarthy was lamenting his boat’s bow-heavy awkwardness and had the lightbulb moment:  “What if we could put our gear inside the tubes?”  As anyone who has burped a dry suit at the put in knows, dry zippers are not only watertight, they are airtight as well, and Alpacka introduced a “Cargo Fly” Tizip zipper up the stern, so that food, clothes, and camping gear could be stuffed inside the tubes of the boat to not only vastly improve performance but also guarantee a dry sleeping  bag.  The boats now come with sealed internal inflatable storage bags that – once full – are clipped into the interior of the boat’s tubes, lowering the cargo weight to make the boats more stable.  Zip it up, blow it up (with the very clever and weightless  nylon bag “pump”) and you have a very whitewater worthy boat capable of carrying literally weeks’-worth of gear (and beer) on the water.

As anyone who has paddled a kayak knows, outfitting is key to get a snug fit, and a snug fit is a key to having a successful day on the river.  The whitewater-oriented boats now come with fairly sophisticated minimalist straps and footbraces that enable strong, deep braces, and yes….you can combat roll a packraft.  It is a little harder to roll than a hardshell, but returning to the pool for practice sessions, shoring up your roll stroke a bit, and using a little longer paddle creates an effective rolling boat.  And when you swim (like hardshellers, we are all between swims) the packraft enables a very quick self-rescue; flip the boat over and haul yourself in, with surprisingly little water still in the boat.  The boats come with very light nylon spray skirts that are remarkably good at keeping water out of the boat, and more and more folks are using the self bailing styles.

If flat water is your gig, there are plenty of options that are lighter, simpler, and cheaper than the whitewater styles, with backpackers, hunters, fishermen, canyoneers, and even adventurous mountain bikers having plenty of options to choose from.  And all come in an extraordinarily small, light package.  The most robust whitewater boats loaded with the outfitting roll up to the size of a 2 man tent and weigh less than ten pounds, and the range goes down to the micro boats which weigh less than two pounds and are not much bigger than a water bottle when rolled.

Once your water craft weighs just a few pounds and can fit inside a pack along with your camping gear, those squiggly blue lines on maps suddenly look a lot different and your riparian world opens up in new ways.  How about a loop combining floating with crossing a few passes on foot to get into adjoining drainages? Riding your bike to the put in, floating, then riding home? Ever driven to the “put in” at the end of the Forest Service road and looked at the trail heading up alongside the creek that has plenty of water, and thought about hiking up for it?  Or considered fly-in rivers, such as the Middle Fork Flathead or the hundreds of wilderness runs in Alaska, and have everything you need for a river trip in your backpack that fits easily into a Cessna?  Or flown commercially to a town (or a country) that has runnable rivers but no kayak stores to rent boats, and even if you could find a boat or paid the exorbitant fee to check a kayak (if the airlines would let you, which they won’t), how will you carry the kayak on your rental car or in the ancient third world van crowded with people, banana boxes, and chickens?

The need that many people have to dig deeper into wild places has always resulted in gear evolutions to enable it, but historically the bulkiness of boats that are viable for river running has limited that ability.  The new generation of packrafts has changed that, and now new opportunities for previously-inaccessible riparian adventures is limitless!

In upcoming issues of AW we’ll explore more of the adventurous possibilities represented by packrafts:  Southwest desert hike/bike/paddle combinations in southern Utah and the Grand Canyon, a river-based loop (finally!) linking the Main Salmon, Big Creek, and Middle Fork Salmon rivers (with a big hike in between), a weeklong, multiple-drainage loop in the Absaroka mountains into terrain that people like to call the most remote area in the lower 48, multi-drainage loops and point to points on both the south and north slopes of Alaska’s Brooks Range, creative single day outings into unusual runs, and even tackling a few of the Sierra’s most legendary alpine class 5 kayak trips.