It's now been a month since mother's day, but Paul and I haven't forgotten to do the final chapter of our ode to our venerable mom.  Summarizing an active and social 90+ year old's life is a daunting task!
Back to the tale.....


Life for Ginny as a 69 year old newlywed seemed to just keep getting better.
Husband TomB was overjoyed to have a new fishing partner and cool old camper van to tinker with and they quickly racked up miles gallivanting about looking for fish. Ginny had always more interested in traveling the rural West than going overseas, but gradually New Zealand, Belize, the British Virgin Islands were added to their carpet-bombing all the fishing spots they could find around the Western US and Canada.

The latter has a guiding company featuring a fish processing ship converted to a high end floating fishing  resort in the Queen Charlotte Islands called the Salmon Seeker, humbly described as The Last Frontier of Fishing, that they visited annually, and from our perspective it seemed to be indeed the salmon and halibut seeker and destroyer as they always returned with a copious supply of monstrous fish.  She was beside herself one Christmas, unable to figure out a good present for us and exasperated at our lack of interest in giving her ideas. She finally mentioned that all she had as the holiday shopping came to an end was a freezer that was just overflowing with salmon and halibut that they had caught and blueberries they had picked. That led to about the best Christmas present a mom can give her Utah sons.

Ginny had raised us to be trout snobs, but Tom B had grown up fishing in Oregon, done some commercial fishing, had a 19 ft jet boat that he and his son built themselves, and was passionate about anything involving water, a boat, underwater creatures, and a thermos of coffee. Sturgeon, bass, steelhead; if it had fins, he was up for a road trip to check it out. One classic trip involved driving away from Portland midwinter with a canoe and no real plan aside from seeking sunshine and fishing and eventually finding themselves on the Gulf Coast of Texas.  “Any fish here?”
They also developed an affinity for a beach alongside the Snake River called “Dug Bar” that may be among the remotest places you can drive to in the lower 48, but that didn’t stop Tom B from taking that old 2WD van down the rugged and precipitous track with his boat and trailer bouncing along behind, and more than once he had to stop to fix a flat on one or the other in the middle of that road in the bowels of Hell’s Canyon (We once asked him if they had a communication device for any major problems, and he replied “Hell yes!  Got one of them fancy cell phones!”  We didn’t bother to point out that they were hours from a signal….).  Once at Dug Bar with Tom’s son Sam they set up a compound that would make any car camper envious, and the morning coffee time stretched late and the cocktail hour started early, with copious bass-slaying happening in between.  Life was good. 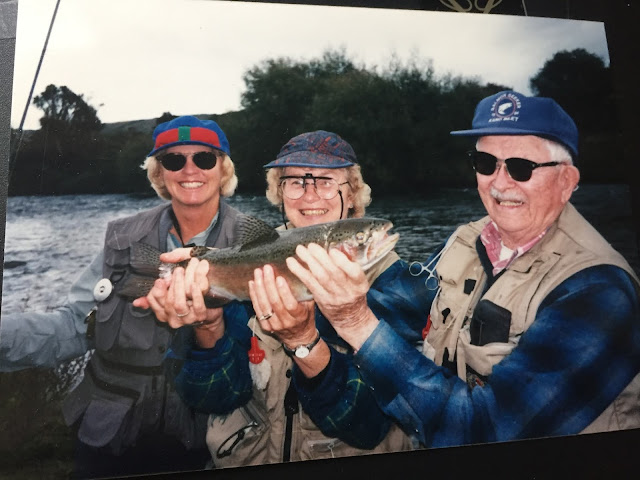 At this point, we (Tom D and Paul) were living out of state. Ginny and Tom B visited us when they could, but their busy travel schedule kept them on the run. Inevitably, their lives began slow bit by bit, with Tom B remarking over a strong gin and tonic at his 90th birthday party that he just wasn’t the man he was at 89. This after recently receiving a freeway speeding warning and explaining to the Oregon State Trooper that at his age momentum was all he had and that he couldn’t afford to slow down. 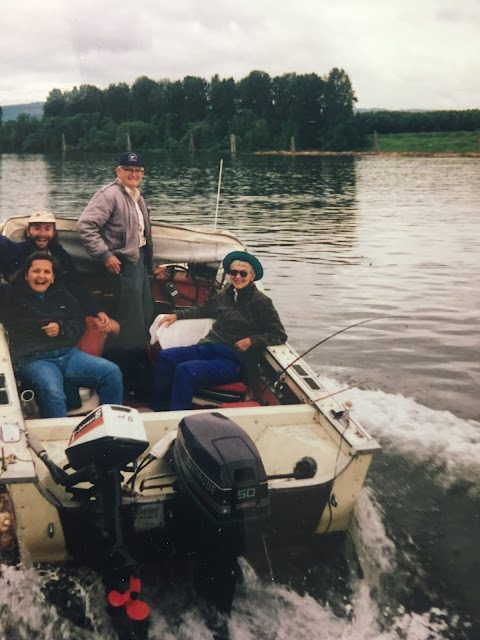 In the fall of 2008, TomB passed away, characteristically annoyed that he was about to miss the Eastern Oregon steelhead run. We were both settled into Utah and Ginny decided it was time to get away from the rain once and for all by moving to Utah.  On the drive out, she was lamenting that she had grown up being known as Ginny and that the somewhat-formal husband PC had always called her Virginia, which then stuck with their Portland friends. Upon being told that she could create a new identity in a new location where a few of us knew her, she brightened up and said that from now on there was no Virginia, only Ginny.  So it has been.
When Ginny left Illinois in nineteen hundred and forty six she was bound and determined to live in the mountains, and was never quite sure how she ended up living at an elevation of 350 feet in western Oregon, so she was excited to have consistent views mountains and the ability to head up into them from time to time.  For her first 6 years or so here, her 3rd floor east-facing window provided a straight view of Gobbler’s Knob, and she was able to use her binoculars give us a report on tracks on the NW face and watch us ski.  When given one wish for her September birthday, she has picked a picnic with us and Janette and Ashley up in the canyons every year since she arrived. 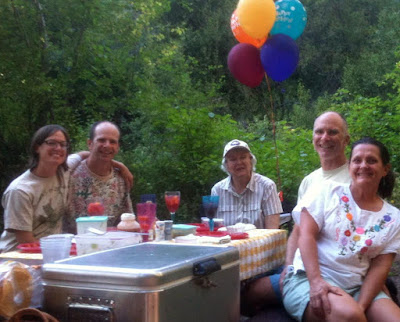 We spent a number of long weekends with her at Utah Avalanche Center forecaster and former Jenny Lake Climbing Ranger Drew Hardesty’s National Park Service cabin on the edge of Lupine Meadow where she found she could spend full days on the Best Front Porch In The World with a book, sandwich, iced tea, watching Mt Teewinot go by.  Her ability and desire to fish has diminished a lot, although when we rented a canoe to fish along the shoreline of Jenny Lake, she found the fishing a lot more interesting than the grizzly turning over logs 40 yards away on the shore. 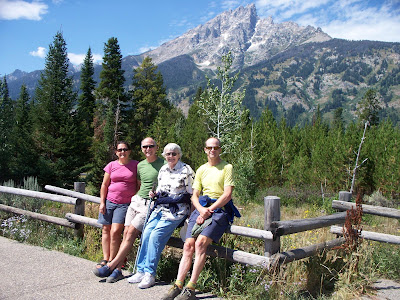 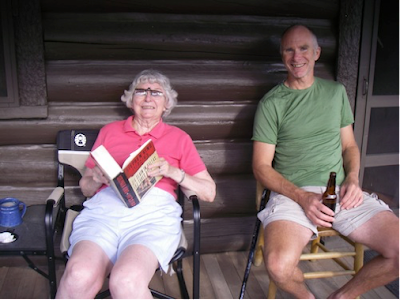 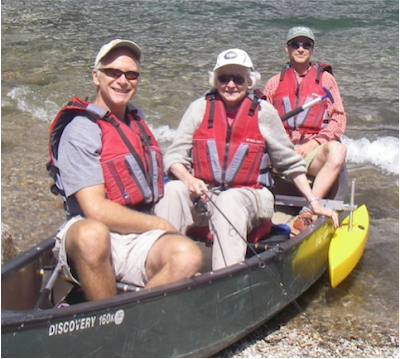 Her 94th birthday is approaching. Diminishing mobility and fading memory changes life a lot and her primary entertainment has become reading, time with the family, and going out for breakfast. Life in assisted living under the pandemic regime is rugged, with her travel limited to the inside perimeter of her tiny apartment and a no-visitation order. We bent the rules a couple of weeks ago and snuck her out for a long breakfast (take out at a local neighborhood park) where she was overjoyed at the simple pleasures of warm sun, cold breeze, slightly runny eggs, homemade apricot jam, and people and dogs of all sizes walking by and giving her a cheery hello.

Like the earlier ode to our dad PC, much of these three posts about Ginny have focused on what she’s done, and it’s very much worth talking a bit about who she is.  Our mom has always been eternally positive and easy going, even as she has aged and more acutely over the last few months of what has effectively been solitary confinement.  She also has been just stubborn and fortunate enough to say, get, and do what she wants, and for better or worse has blissfully ignored much of the challenging aspects of American life/history; she doesn’t really remember the Korean or Vietnam wars, the civil unrest of the 60’s, or any other major social upheavals, but she sure remembers well the many hiking, fishing, dog training, and mushroom hunting adventures that she did with her family and friends.
She claims to have had kids without any real intent or strategy for raising them but it somehow it (barely!) worked out okay. Her natural ability to chat anybody up is legendary, yet as she aged that chattiness didn’t devolve into droning on and on the way some old folks tend to do because she still has maintained a keen interest in other people and much prefers learning about what others are up to rather than talking about herself, a quality that made her a good newspaper reporter and writer.  In her 10th decade she is quite comfortable with her mortality, with the knowledge and satisfaction that – like her two husbands who went before her – she’s led exactly the life that she wanted to. 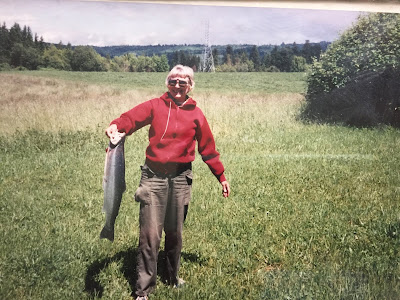 Life in our new Covid-inspired reality is hard on someone her age.  She is in a nearby assisted living facility with a strict lockdown and no visitation policy, which raises the question of whether social isolation or the potential vulnerability to a likely fatal (at her age) disease is the greater risk.  There are no easy answers right now. Certainly we all miss our regular 2-hour breakfast outings and face-to-face time greatly.  But in true Ginny fashion she is still – in her words – “just fine!”

Ginny Diegel’s been a great mom; the best we ever had! 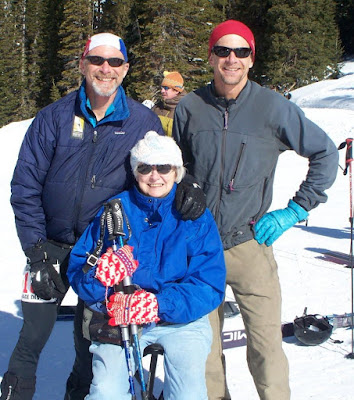 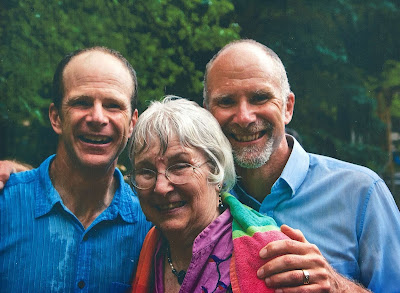 Thanks again to brother Paul who wrote the majority of this post and dug up a lot of great pics for this series from some buried treasure chest!
Posted by Tom Diegel at 1:31 PM