As the famously-anemic ski season in Utah both wound down (time-wise) and wound up (pretty good skiing in March!) thoughts of spring ski trips to chase snow in other lands started to come into play.  I had the good fortune of doing three great trips outside of Utah that all had worked out perfectly in terms of conditions, so why not push it and go for four?  Seemed like a good rationale at the time.....

A year ago I tried an ambitious adventure in the Uintas with two very capable lads:  Chad Bracklesberg and Eric Bunce, and while we didn't necessarily accomplish what we had set out to do due to sub-optimal conditions, we did have a fine time and I realized that they are worthy pards for any sort of dumb outing.  Inspired by friends Noah Howell, Andrew McLean, Truck Gloves' Brett Keyes,  and others who had done what Andrew called "One Drop Shopping" on some far remote place in deepest darkest Alaska in the spring (when it's actually not dark, and in fact there are 17 hour days!) we decided to head north.  I have often said that I have been way too smart to ever winter camp; why camp when you can hang out in fun, warm yurts, huts, or lodges and yuk it up with friends as your boot liners dry and salmon grills on barbies?  But sometimes smarts can give way to the lure of adventure (ala last year's attempt to ski the Aleutians' Shishaldin Peak) and the scars from that trip had long since healed, so northbound we went to ski in the heart of the Alaska Range.

The trip wasn't going to be quite "winter camping" per se.  If last year's Uinta-fest was minimal and inevitably subject to a bit of suffering, the Alaskan drop n shop is relatively decadent; in lieu of a featherweight bivvy sack for "shelter" we had two four season tents and a cook tent, and in lieu of freeze dried dinners and gorp we literally bought a hundred+ pounds of food at Costco.

And instead of dragging ourselves and our gear 80 miles in a few days, we had to drag our gear far enough from the glacier landing strip so that we wouldn't get run over as the plane took off.

Everything started out very smoothly; we landed in Anchorage and hung out with former Utahn Wendy Wagner and her pard Jon Davis who were kind enough to loan us one of their phat sprinter vans for the journey up to Talkeetna, we bought plenty of food, had dinner with my Brooks Range Buddy Roman Dial, did a couple of the classic hikes around Anchorage, and were delayed on our flight for only a day by a storm that was providing a nice refresh to the snow that had been baking in the sun for a couple of weeks.  Arriving in Talkeetna there was no doubt we'd be able to fly in the next day with Talkeetna Air Taxi, one of the two companies that flies climbers in to the Denali base camp (not far from our destination).

And sure enough, bluebird conditions enabled us to fly in, make camp, and still have enough time for a short outing with a few fun turns in one of the more spectacular mountain settings I've ever seen. 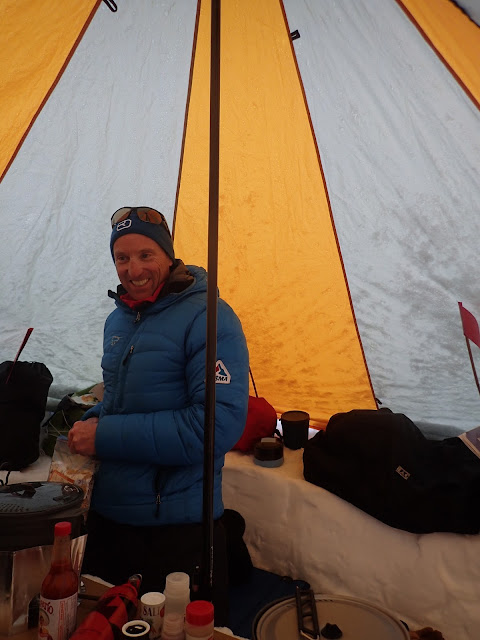 The next morning also started out nice enough for us to do a bit of recon of our surroundings and see what the potential was, and we even made a bid for a couple of couloirs,
but a too-open bergshrund (where the glacier ends and likes to pull away from the adjacent rock) and a bit more avy danger than we preferred kept us mostly in the low angle terrain.
And then it started to snow. 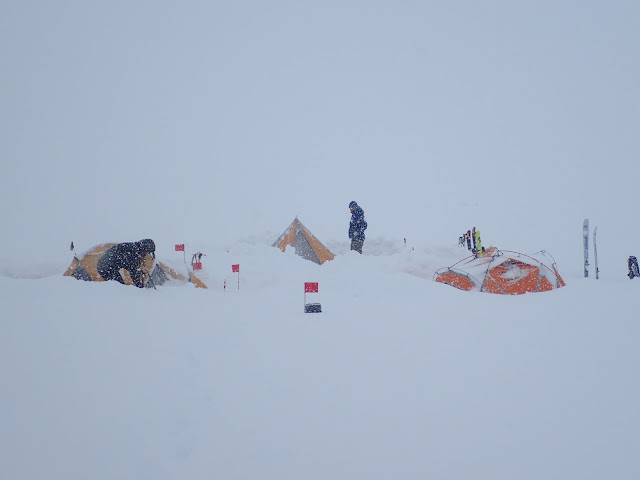 We knew that snow was in the forecast both short term and long term, but either we are Alaskan newbies who don't really understand forecasts, or this was an anomalous event, but it basically snowed, and then snowed a lot, and then it snowed some more, and then it kept snowing, and then it didn't let up, and then it snowed again.
And also as Alaskan newbies, we perhaps didn't understand the depth of the fogged-in, snowed-in glacier white room:  going out of sight of camp  - which meant more than 40 feet away - put you into a vertigo-inducing zone that makes one barely be able to stand upright, tho the thigh deep snow helps keep you propped up.
Basically, it snowed like none of us had ever seen or heard of before.  For basically five and a half days, it snowed probably an average of 2 inches/hour.  For the first coupla days we kept saying "just when you thought it couldn't snow harder, it does, and for hours on end!" 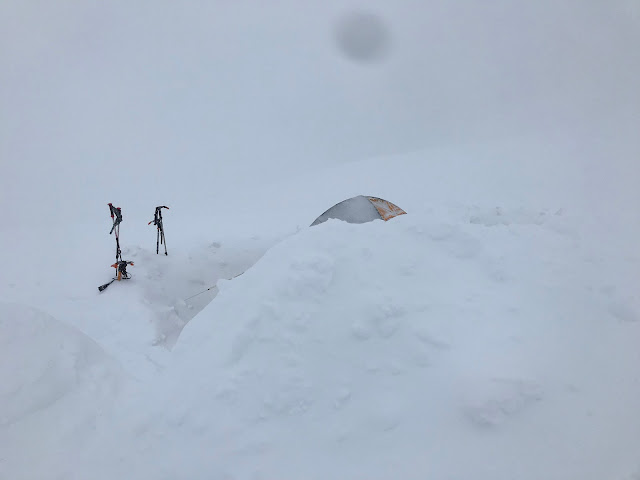 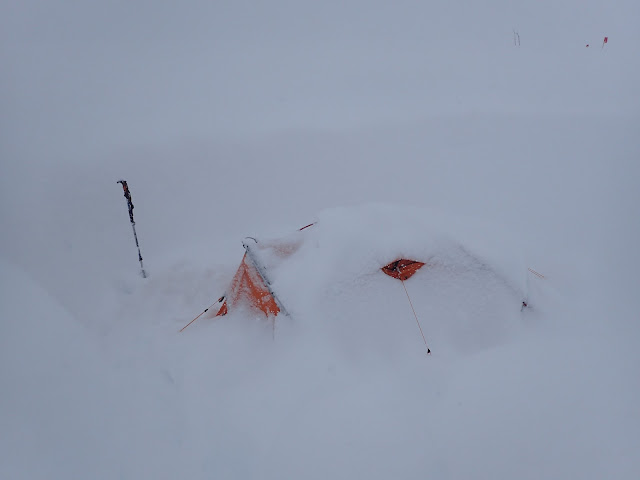 As a result, of course, we got into shoveling. 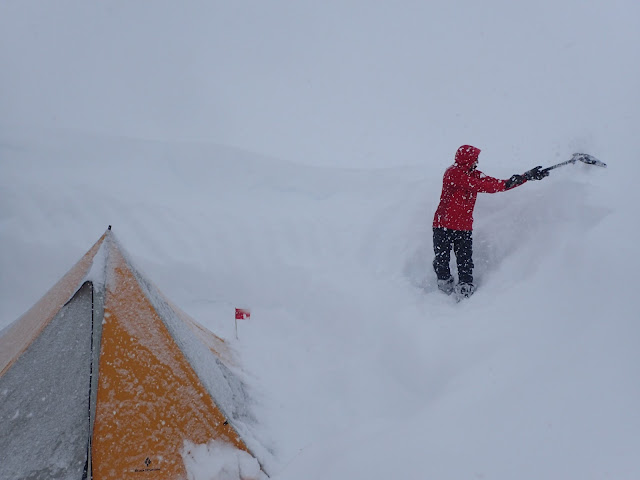 Shoveling our standard Sugarhouse driveway usually takes about 20 minutes; sometimes 45 on a big day and I'm feeling compelled to do the walkway to the porch that the mailman usually ignores anyway.  It has simply never occurred to me that there's a possibility to shovel for....hours and hours and hours each day (and night).  At the storm's peak (a very flat curve) we figured that we were shoveling for over 6 hours per day in order to keep from drowning in the snow, and I remember at least one point where I realized that by the time I'd made the latest lap around my tent I could have easily just done another lap of shoveling, since it was coming down so hard!  And we had the Black Diamond Megamid as our cook tent, and because that "tent" is not a tent and is not as robust as our other 4-season tents we had to make sure that was pretty clear and was indeed robust, while at the same time trying to keep the sides somewhat pinned down to avoid spindrift blowing in around the edges.  Eric and Chad made an effective second tier so that we wouldn't have to chuck the snow so high as the hole deepened: 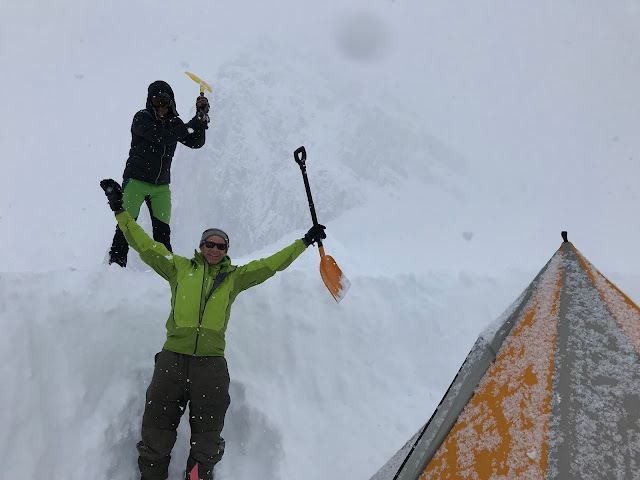 Anyone who has read any accounts of high alpine climbs has read of the tales of being tentbound for days on end.  It's easy to say, but for pretty motivated people who like to keep themselves in perpetual motion a week's worth of sitting around was pretty challenging.  But between some good books: 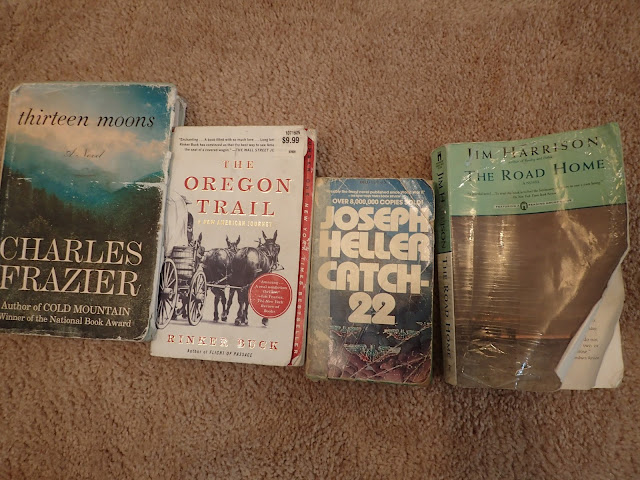 and a couple of fun pards who knew that there was nothing to do other than to exercise every ounce of zen-like patience, and we were able to keep each other laughing: 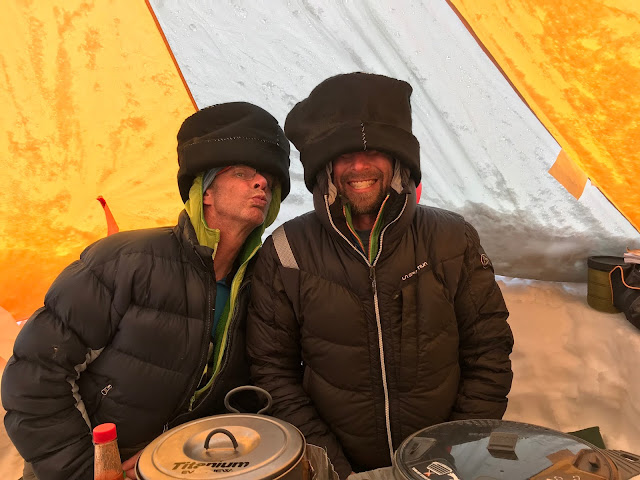 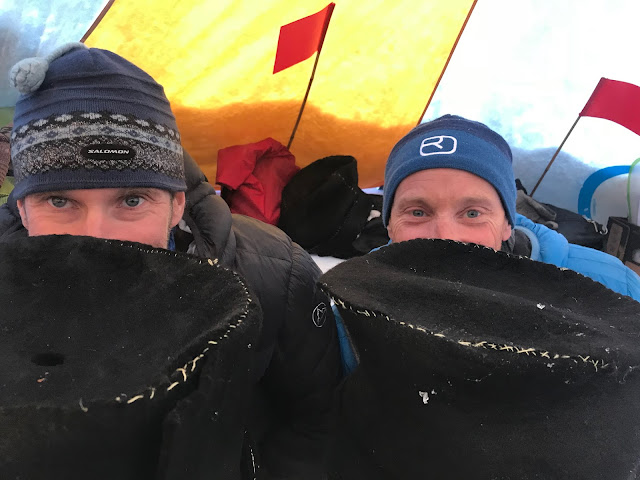 and we were effectively able to kill a solid half-day by coming up with a video to promote the exciting new sport of competitive shoveling!


Finally one afternoon we got a break in the weather, and we were able to shuffle out to see if we could make a few turns.  Given the amount of snow and wind that we had received and the fact that there were density changes within the copious new snowpack, we were very wary of high avalanche danger; we had heard avalanches periodically rumbling around the glacier, and were happy that Eric picked out a nice safe spot, especially when we found out that a couple from Alaska got buried in the middle of the night by the powder cloud of an avalanche that blasted down a couloir that snaked up the Troll Wall:
So we went to a nearby slope that was marginally skiable.  Eric and Chad valiantly made some turns for all of the 800 feet of vertical that we had, but I cracked myself up by just throwing down some spread-eagled 11's: 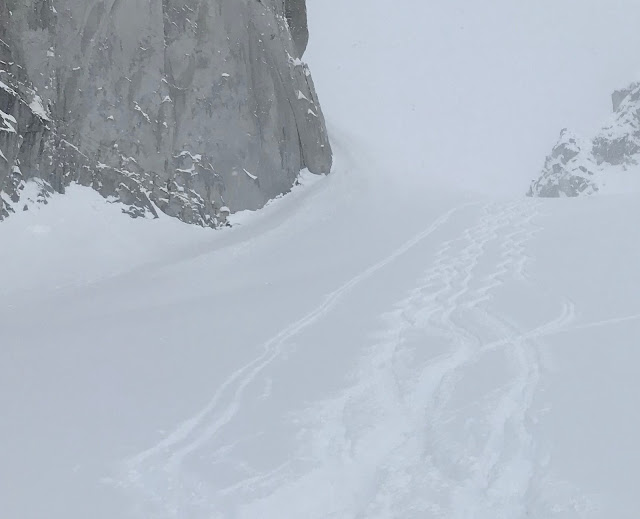 That brief evening window of clearing was barely worth mentioning to the pilots, and sure enough it socked back in shortly thereafter and began to snow again in earnest, driving us into our beloved nylon caves in the whiteness.
Given the amount of snow and the consistency of the storm (storms?) we began to ask questions like: is it possible to get stuck in here for a LONG time?  How long can these storms really last? When do we start to consider food rationing?  The other groups on the glacier were either at or past their requested pickup time, and even though everyone knows to bring extra food and extra fuel (most folks use old school MSR Whisperlites in lieu of the butane stoves, since the white gas is more plentiful, works better in cold, and is more predictable, and because stoves=water=life, those aspects become really important) we knew that they were probably a bit more twitchy than we were.  And we knew that the pilots were keen to get flyin' as well, since they were undoubtedly accumulating more Denali climbers and other skiers by the day and having them just hover around.

We had some communication with the outside world via our inReach, and finally we saw that there might be a break in the weather.  Sure enough, Monday night the clouds started to break up, and we heard from the Talkeetna pilots that they were asking the National Park Service to waive their post-6pm flight closure for the next day to enable them to get folks out.  Indeed, the next morning dawned bluebird, and we sent a message to the pilots telling them that we were good to go and then went out to help stomp out the runway....only to find out that Talkeetna was totally fogged in!   The irony of our much-desired high pressure finally coming in and then pushing down fog into the important valley floor was not lost on anyone.  And as the afternoon wore on and we thought that the Talkeetna fog may burn off, the fog that had formed on the Kahiltna glacier below us marched up the valley and enveloped us!  But soon enough that too burned off.  Even though it had become a shoveling trip Chad and I decided to do a bit of cross training and go out for some skiing: 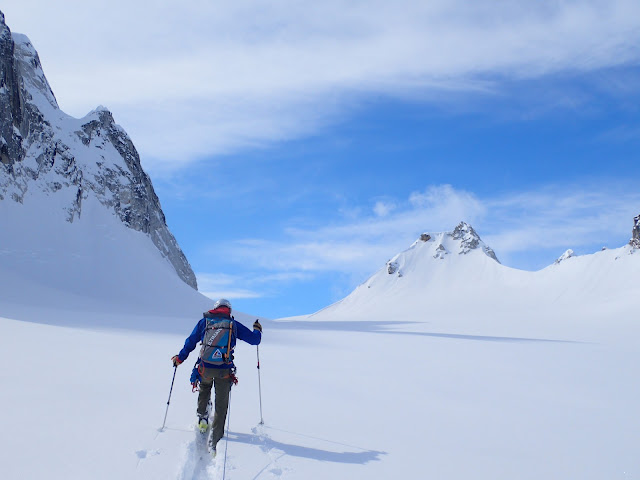 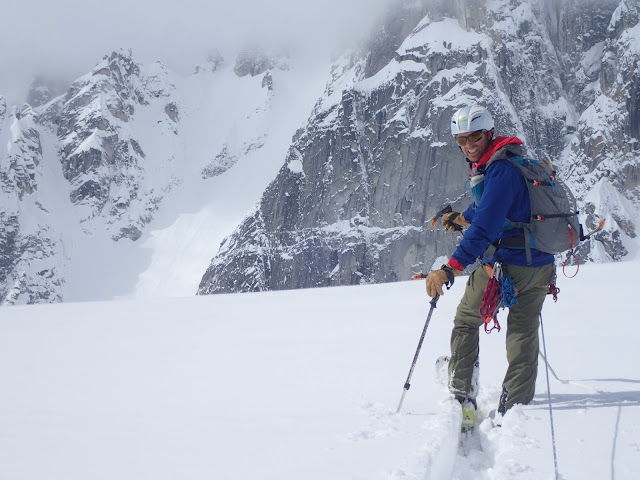 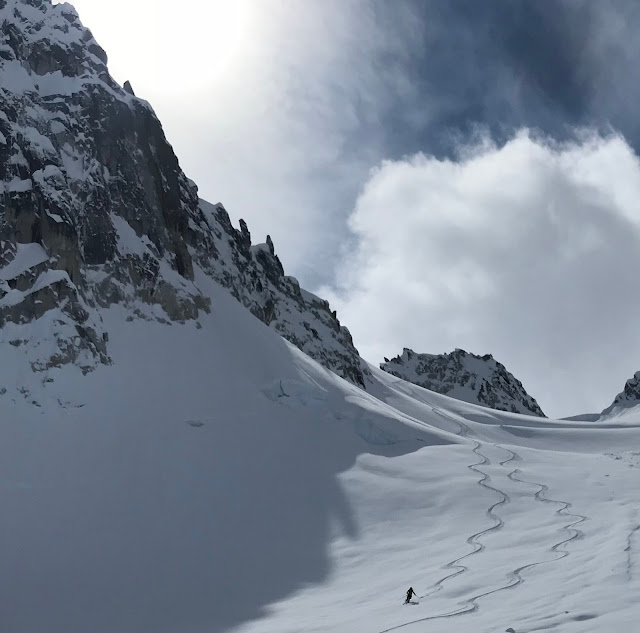 and as we were ripping our skins we heard the not-all-that familiar buzz of a plane in the distance, and there it was! 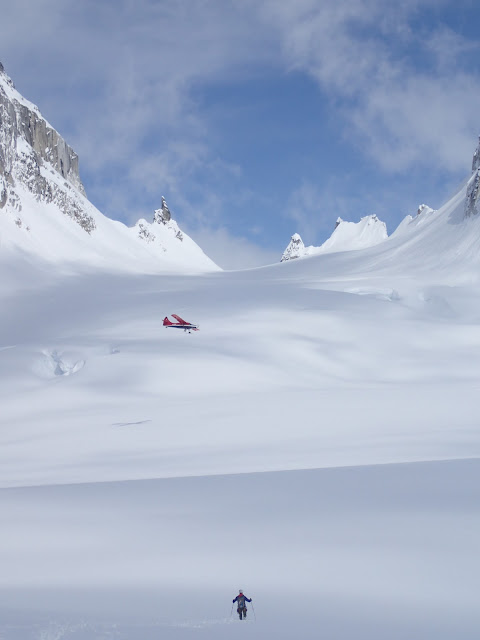 We felt like we were prisoners being liberated by the Allies from our white prison (well, that's probably a bit of a stretch).  But we were glad to see the plane.  We weren't actually scheduled to fly out, but given the forecast and the too-deep snow, we were ready to go (as it turns out, they were able to fly the next day, but then faced another 5-day shutdown after that).  so we helped pack out the runway: 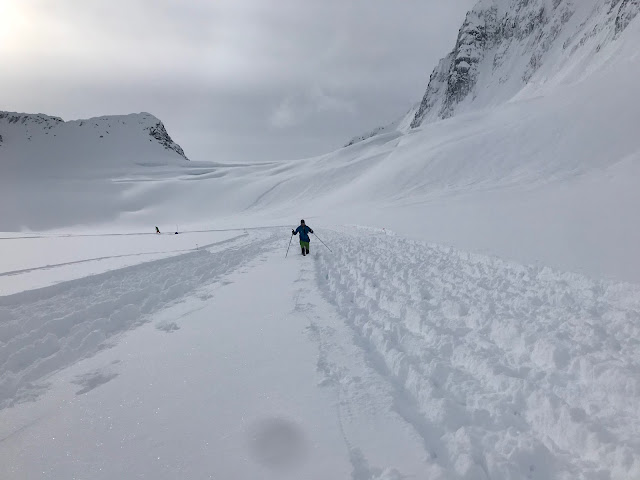 And thus we were whisked away via our winged lifeline: 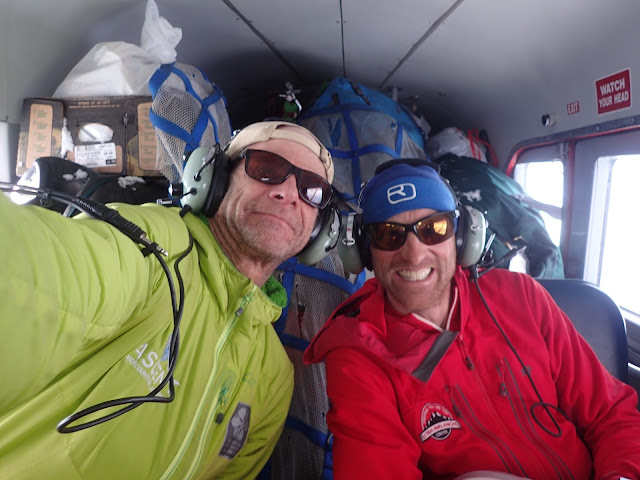 along the way we saw some impressive evidence of some big avalanches:
and thus we were back in Talkeetna, ready for the next adventure! Which I'll yap about in a hopefully-soon to be followed second post.

I can't emphasize enough how nice it was to have a coupla great pards for what was a challenging trip.  It woulda been easy to get grumpy, but Eric and Chad were able to make a stuck-week go by really well.